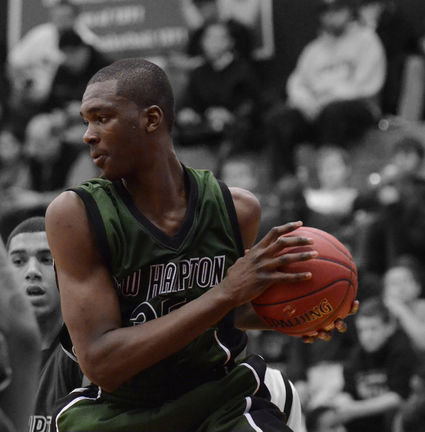 Sophomore Noah Vonleh, a 6-8 forward from Haverhill, is starring for New Hampton, which is ranked 22nd in the country. 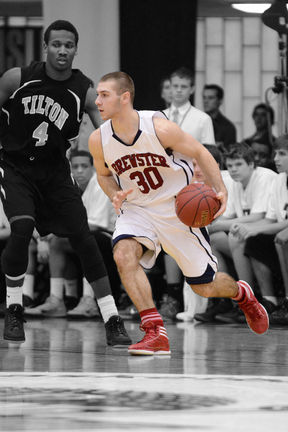 Brewster post-grad Joe Bramanti of Andover is the starting guard on the top-ranked prep school in the nation, but he is still hoping to attract more interest from colleges. 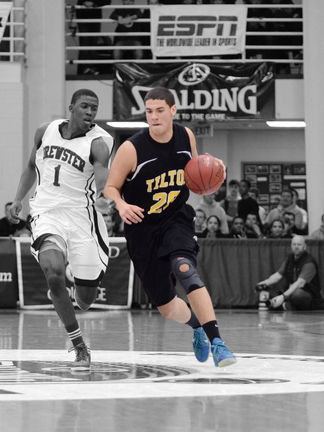 Sophomore Noah Vonleh, a 6-8 forward from Haverhill, is starring for New Hampton, which is ranked 22nd in the country.

Brewster post-grad Joe Bramanti of Andover is the starting guard on the top-ranked prep school in the nation, but he is still hoping to attract more interest from colleges.

The Hoophall talent was off the charts, drawing the likes of Duke's Mike Krzyzewski, Kentucky's John Calipari and UConn's Jim Calhoun to the 5-day tourney.

Our region has never been known as a hoops hotbed. It will be fascinating to see if this is an aberration or a trend.

Still not old enough to drive, Noah Vonleh has been a household name in high school basketball circles for several years now.

When you're 6-8 and 220 pounds, with size 16 shoes, impossibly big hands and the skill set of a guard, the question is incessant.

Hey, Noah, where are you going to college?

For the New Hampton sophomore from Haverhill, the answer is wherever he pleases.

But he was tight-lipped on where he's leaning.

"Nothing right now," he said, sounding like he'd been coached to give that answer. "A lot of people ask. I just tell them I haven't decided. I can't keep track how often I'm asked."

Among those asking Sunday were Blue Devil Nation, a Duke fanatic website.

Although he didn't have one of his best games — 7 points and 9 rebounds in a 55-49 loss to Notre Dame Prep — you can watch the Haverhill High transfer play about 30 seconds and realize he has the potential for greatness.

He had a soft tip for a hoop, a loud dunk and effortlessly brought the ball upcourt.

Few in the know doubt he could become the first area product to make the NBA.

When asked if that was the goal, the soft-spoken Vonleh said, "I guess you could say that."

There are always obstacles to overcome, but it seems work ethic will never be one.

He said the best thing about the Wolfeboro, N.H., school was, "I have access to the gym all the time."

He said doctors said he could grow to 6-10. Although he can still appear a bit gawky at times, he's athletic enough to compete in the nationally-televised Hoophall dunk contest. On one impressive dunk, he went airborne, put the ball between his legs and jammed.

He has fond memories of his two years at Haverhill, where he was a one-man gang for a rebuilding Hillie program.

"I miss playing in the MVC," said Vonleh, who wears his idol Kevin Durant's No. 35 but probably is more similar to Lamar Odom, another big forward with all the skills.

He tries to keep the hype of being ranked the No. 6 sophomore in the country (by ESPNU) in perspective.

"It's really good to have people know (you're good). But I don't let it go to my head," said Vonleh, whose sister, Samnell, is a rapidly improving 6-4 freshman center at Whittier Tech.

"He's a sweetheart of a kid," said Scheinman, the former Plymouth State head coach. "The sky's the limit. He's very coachable. That's not b.s. I've coached 30 years, I wouldn't just say that. If he was a baseball player, he'd be a five-tool player: he runs, jumps, dribbles, work ethic, the whole package."

"He's a one-of-a-kind player," said Noel. "I'll be blessed if I can play with another like him in my lifetime. You look at him, you might not think he's a basketball player. He's 100 percent heart. He's just a great player."

Great enough that he's ranked the No. 82 senior in the country and headed to Iowa State on a full boat.

Niang didn't play one of his better games (9 points, 5 rebounds) and fourth-ranked Tilton lost 57-53 to archrival Brewster, the No. 1 team in the country.

But that was just a blip on the radar for Niang, who early in his career was thought to be a Division 2 player but now is headed to the big-time.

"We'll catch them at their place in February," promised Niang, who is averaging about 23 points a game.

Tilton and Wolfeboro are about 40 miles away from each other and this rivalry has grown to be a fierce one.

"I read somewhere they said it's not a rivalry," scoffed Niang, who at last count had 1,945 career points. "That kind of aggravated us."

Tilton coach Marcus O'Neil said, "Georges is playing great. He is extremely skilled and intelligent. He is in relentless pursuit of excellence."

Just because you sign with a school, doesn't mean the recruiting wars are over. Not in the cutthroat world of bigtime college sports.

"Once I committed, that was it," he said. "I still hear from a lot of people. You just have to be loyal. I'm signed, sealed and delivered. Let's go!"

By all accounts, it has taken extraordinary desire to get this far. He said don't worry about him losing his edge now that the dream has been realized.

"I don't like to look at what I've accomplished," said Niang, who has starred on AAU and prep school national championship teams. "I still keep that fight in me. That's how I'm successful."

Bramanti, an Eagle-Tribune Super Teamer last winter at Andover High, has made the big jump to Brewster, which is ranked No. 1 nationally in the SI.com/Five Star Basketball poll, among other polls.

A starting guard, he's more than proven he belongs.

But still only Division 1 Citadel, a military school in Charleston, S.C., and Division 2 Stonehill, where his cousin, Masconomet's Adam Bramanti has committed, have offered scholarships.

That has confounded the folks at Brewster.

Bobcats coach Jason Smith said, "On a team with six high-major Division 1 players, he's arguably our most important player (he leads in their plus-minus stat). He's able to defend all three perimeter positions. In my opinion, he's a definite Division 1 player. As teams get into conference play, college coaches will realize they need someone like Joe Bramanti on their team."

His teammate, Michigan-bound 6-10 center Mitch McGarry, who is in the hunt for national Player of the Year honors, wonders what they are thinking.

"Personally, I think he's high major Division 1," said McGarry. "He guards the toughest guys and locks them up. He doesn't take any crap."

Never has, never will.

With his fullback physique, the 6-2 "Brama Bull" has always prided himself on his rugged defense.

"Defensively, I think I can play vs. anyone," he said. "The defense comes from my dad. He always wanted me to cover the best guys and lock them up. There's almost a craziness aspect to it."

He's not crazy about the recruiting process, but he wearily has accepted it.

"Last year taught me not to worry," he explained. "Coach seems to be surprised (at the lack of offers). I'm not too surprised."

Of course, having two offers in the bank isn't the worst situation. Fairfield and Jacksonville are starting to show interest and he has offers from BC and Florida State to walk on.

The concern is his offense is limited, which might come as a surprise to those who saw him score 1,084 points with the Golden Warriors. He's working hard to improve his outside shot and ballhandling.

The powerful drives to the hoop — who else had the nerves and skill to take on Central Catholic 7-footer Carson Desrosiers? — are still key to his repertoire.

The nation's most respected scout, Tom Konchalski, has called 6-10 Tilton junior Nerlens Noel the nation's premier shotblocker since Patrick Ewing at Cambridge Rindge and Latin in the early '80s.

But Bramanti didn't think twice about taking it to the hole on the he-has-to-be-seen-to-be-believed Noel.

One was an acrobatic lefty lay-in for his only points and the other Noel swallowed him up.

"It was definitely an advantage having played vs. Carson," he said after Brewster improved to 14-0. "Coach just old us to attack."

He said "all the grabbing and holding" in the Merrimack Valley Conference was similar to prep school ball.

He said he has no regrets about taking the post-graduate year.

"I'm definitely satisfied," he said. "This has made me so much better."

The talent on the floor included players headed to Arizona and Michigan and another superstar who has been offered by Kentucky, UConn and Duke.

But the MVP of St. Mark's 67-57 win over Friends Central of Winnewood, Pa., may have been a 5-8 scholar-athlete headed to Division 3 Amherst College to play football.

Jaymie Spears, a fifth-year senior from Haverhill, pumped in 15 points on 4-of-5 shooting (3 of 4 on 3-pointers) with four steals and four assists and just one turnover on the game, which was broadcast on ESPNU.

Spears hit the ground running at Georgetown High, averaging 6.6 points a game as an 8th-grader. Two years later he was scoring 22.3 a game and 2,500 career points seemed a possibility.

He opted for St. Mark's, where he has endured some ups and downs. Sunday, was clearly one of the ups for Spears, who is enjoying a fine final season with averages of 11.3 points and 2.7 assists.

"I didn't know what to expect," he said of the transfer. "I figured it out. It took awhile. I think I showed it today. I just wanted to prove I can play at this level. Starting, not starting, being hurt, it all came together on the big stage today."

He had a big steal and lay-up with 5:30 left and followed that with a top of the key 3-pointer, which was the knock-out blow, giving St. Mark's a 56-43 cushion.

"He's a tough hombre," praised St. Mark's coach Dave Lubick. "He's a tremendous kid. He's been a great story for us. He's struggled a bit, but he's a very tough kid, mentally and physically. I couldn't be more proud how he's stuck with it."

Spears always was a talented football player, but first and foremost, the Spears family loves basketball.

His grandfather, Barry Sr., is in the Rider University Hall of Fame and was a well-known college referee. His uncle, Barry Jr., was the Greater Lawrence Christmas Tourney MVP in 1992 and was the 1998 ECAC Tourney MVP for Merrimack College.

"I never really thought of college football until this summer," said Spears, who was recruited to play defensive back and very well could play basketball, too. "It's a privilege I can go to a school like that."

Michael Muldoon is an Eagle-Tribune sportswriter. E-mail him at mmuldoon@eagletribune.com.

2: Number of sports Jaymie Spears will likely play at Amherst

What they are saying

"If he was a baseball player, he'd be a five-tool player. ... He's the whole package." New Hampton assistant John Scheinman on Haverhill's Noah Vonleh.

"I'll be blessed if I can play with another like him in my lifetime." All-American Nerlens Noel on Methuen's Georges Niang.

"He's been a great story for us." St. Mark's coach Dave Lubick on Haverhill's Jaymie Spears.