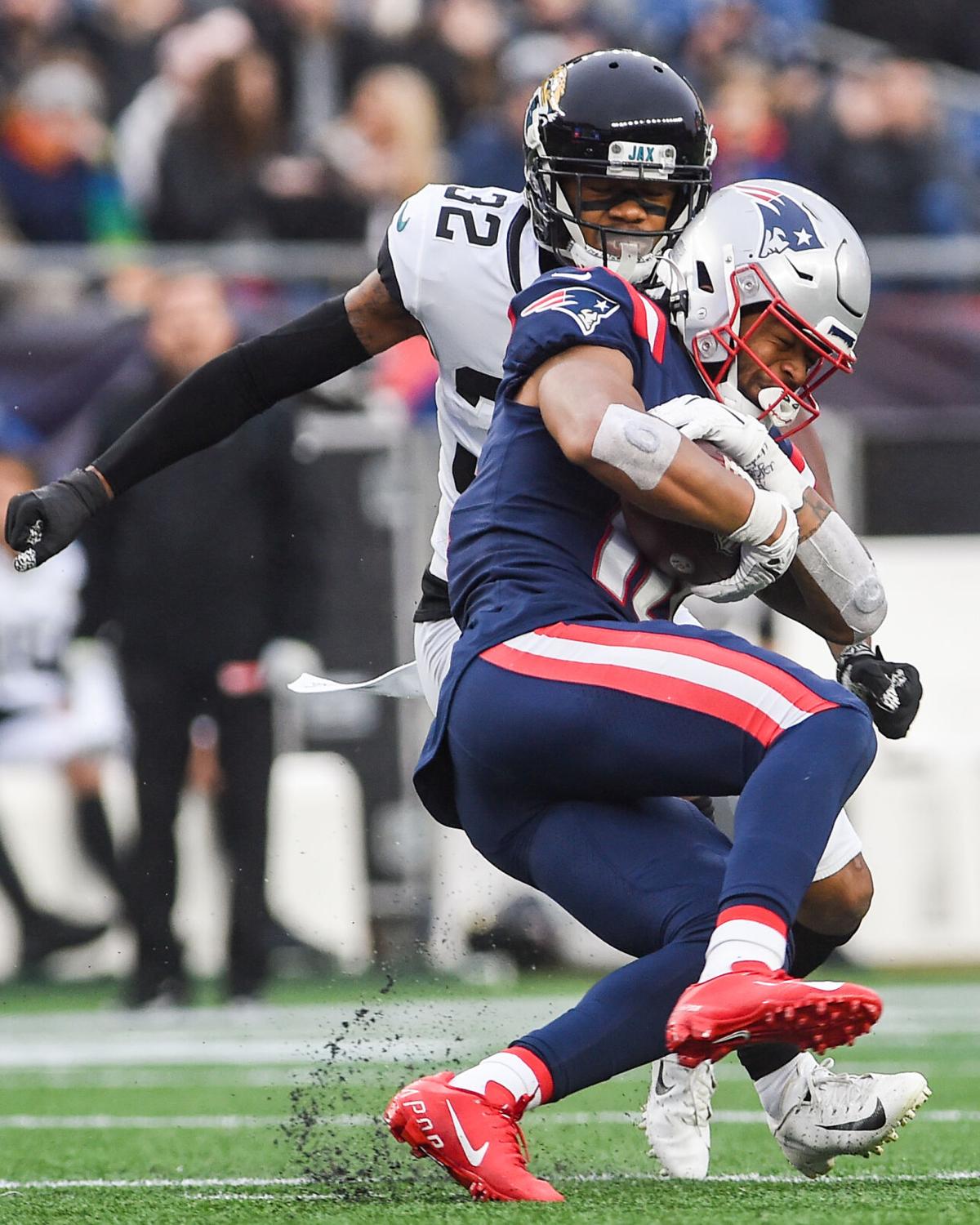 Patriots receiver Jakobi Meyers braces himself after a catch on Sunday against Jacksonville. Meyers remained Mr. Consistent, one of three undrafted players that played a major role in the win. 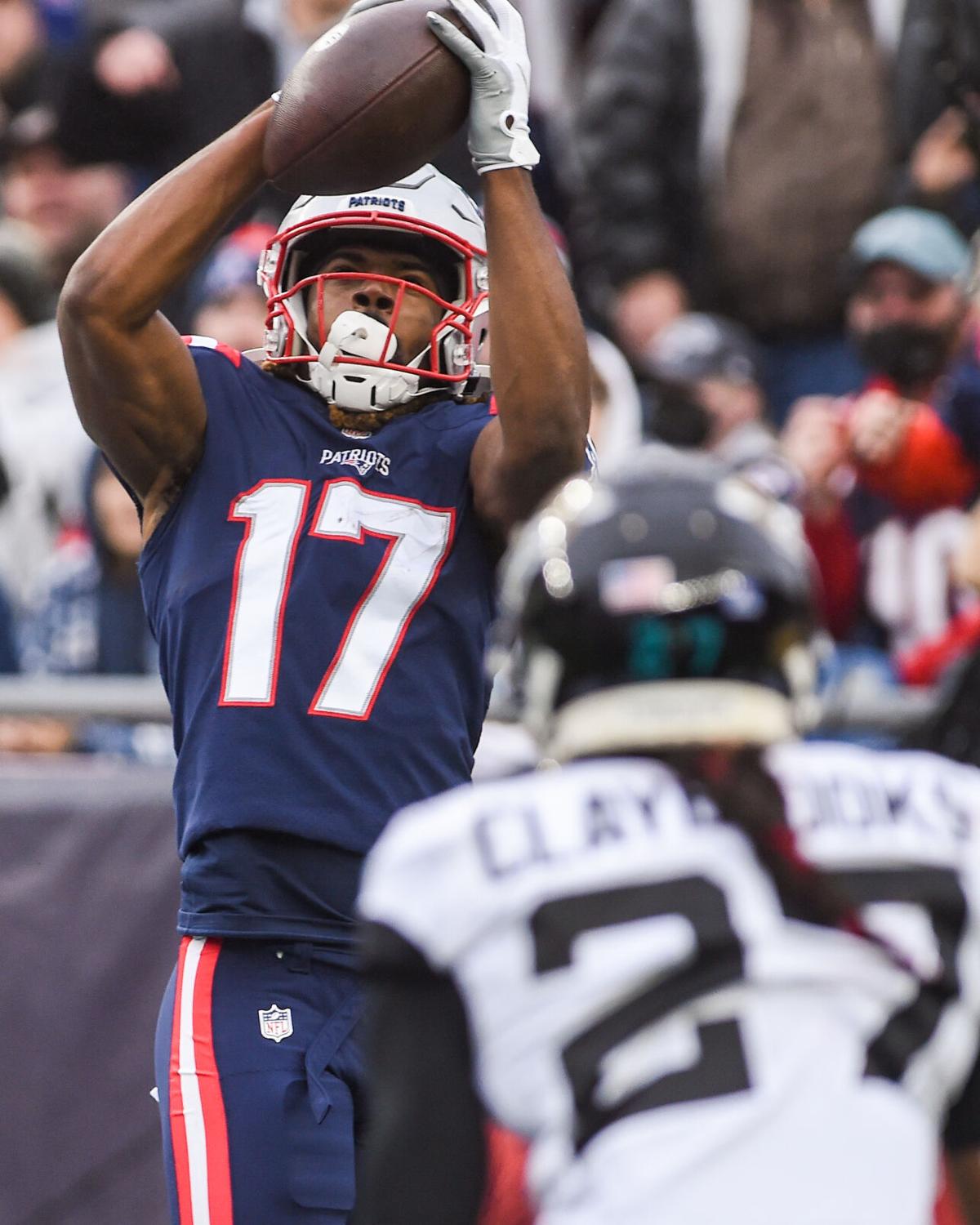 Patriots receiver Kristian Wilkerson catches a pass for a touchdown on Sunday against Jacksonville. Undrafted Wilkerson went from the practice squad to go-to receiver.

Patriots receiver Jakobi Meyers braces himself after a catch on Sunday against Jacksonville. Meyers remained Mr. Consistent, one of three undrafted players that played a major role in the win.

Patriots receiver Kristian Wilkerson catches a pass for a touchdown on Sunday against Jacksonville. Undrafted Wilkerson went from the practice squad to go-to receiver.

FOXBOROUGH — It really is quite a sight to see every week in the NFL, particularly here in New England.

And the Patriots usually win.

Yup. Nick Saban’s influence (see Alabama Crimson Tide) reeks all over the Patriots roster, due in part to his friendship with his former boss in Cleveland in the early 1990s, Bill Belichick.

It’s the guys nobody wanted, like that wide receiver from Southeast Missouri State in 2020, or the guy who was among the nation’s leaders in receptions in 2019 from North Carolina State, and a pair of underwhelming cornerbacks from Washington and Maryland.

And Sunday against the Jaguars was another one of their days.

This trio of undrafted Patriots — Kristian Wilkerson of Southeast Missouri St., Jakobi Meyers of N.C. State, Myles Bryant of Washington and J.C. Jackson of Maryland — stole the show from the Alabama guys, who weren’t too shabby themselves.

Wilkerson, filling in for oft-injured N’Keal Harry, got his first career start in his second season as a practice squad player.

He scored two touchdowns. He should’ve had a third, but it was barely knocked away.

“Wilk is a hardworking kid,” said Belichick, who usually doesn’t throw nicknames around. “He normally plays the top, or one of the top receivers for our opponents (on the offensive scout team), so he’s targeted a lot in practice. But he’s always ready to go when we’ve had injuries or needed guys to step in.

“It’s a great example for all our guys to look at. Undrafted player that’s come in and established a role for himself, and he’s created a lot of value because he can do a lot of things.”

Meyers, aka Mr. Consistency, led the Patriots with eight receptions on eight targets, for 73 yards. He quietly scored the second touchdown of his career — yes, career! — in officially putting the game away 28-3, sneaking away into corner of the end zone.

Bryant has quietly worked his way into being an important player. Remember the end of the Buffalo game, in Buffalo? it was Bryant who ended the game near the end zone, knocking the ball away.

Yesterday, it was his ripping the ball away from Jaguars receiver Ryquell Armstead and returning it 33 yards, setting up the Patriots third TD in the second quarter.

And last, but definitely not least, is Jackson. After his worst game as the No. 1 cornerback on the team, last week against the Buffalo Bills’ Stephon Diggs, he was back to his elite self on on Sunday against the Jaguars.

He snared the 25th interception of his four-year career, the most in the NFL over that span.

It was a classic beat-the-receiver to the ball moment, his eighth interception in 2021, ranking him No. 2 in the NFL behind Dallas’ Trevon Diggs (11).

This trio of non-draftees are, interestingly, at different levels of their career.

Wilkerson still doesn’t know what hit him. Meyers is not the best Patriots receiver, but he’s by far the most consistent and a favorite of Mac’s on third down (three receptions). and Jackson is about to be paid a lot of money by somebody next year as the top cornerback on the market.

But that’s just how Belichick prefers it, replace one guy with another.

He’s the newer version of Patrick Chung, who basically retired after the 2019 season, a Swiss Army Knife as a defender.

Phillips entered the NFL as an undrafted free agent out of Texas signing originally with the Eagles. Now he’s finally getting paid.

“Why would I leave here?” asked Phillips. “You have a view (of New England) from the outside, that it isn’t fun around here. That’s wrong … It’s a great place to work … We just work hard around here.”

Juxtaposition that with the Jaguars, who have what draft experts called was the most highly rated quarterback since Andrew Luck, who was the best quarterback rated since John Elway.

The Jaguars might be worse than they were a year ago, an organization is in shambles at every level, including the key positions of head coach and general manager. And, to make matters even worse, they are still fighting a positive COVID-19 outbreak among multiple players.