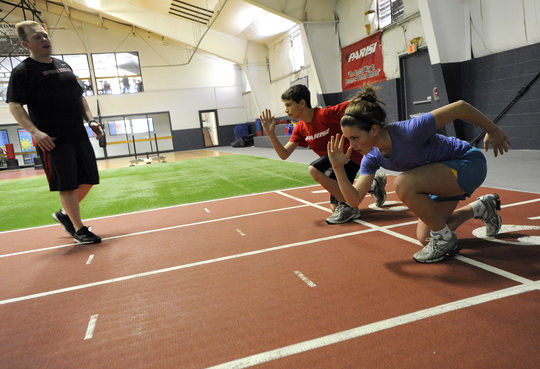 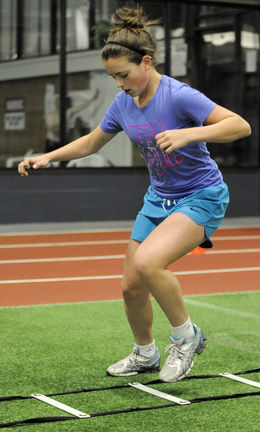 Jenna Palmisano, 14, of Salem works out with “The Ladder” during a Parisi Speed School lesson at Cedardale Health & Fitness Center in Haverhill.

Jenna Palmisano, 14, of Salem works out with “The Ladder” during a Parisi Speed School lesson at Cedardale Health & Fitness Center in Haverhill.

With more and more competition among female athletes every year, Central Catholic freshman Jenna Palmisano figured that she needed an edge when she got to high school.

With an older sister, Alexa, already involved in high school athletics, she knew that it can be tough to make your mark when so many youngsters get involved in sports, and a great deal are involved with AAU travel teams at a young age.

So a year and a half ago, she took the extra step to prepare for her high school career. Like a growing number of young athletes, she checked out various Speed and Strength programs in the area, finally choosing the Parisi Speed School at Cedardale in Haverhill after also considering Boyle's in North Andover.

"I wanted to improve my speed for sports," said Palmisano, a resident of Salem, N.H.. "I was pretty fast already, but I knew I could go faster."

And speed and quickness has over the years become an athlete's greatest assets, whatever the sport, something that can compensate for both strength and lack of skills.

But besides speed, says Palmisano's mother, Amy, there was another reason for her interest in the program.

"I think she felt she was small (5-foot at best) and needed to get stronger as well as faster," she said. "It was her idea — Jenna is a very driven kid."

In fact, for nearly two years, Palmisano has been attending workouts at Parisi, at least once a week during the field hockey and lacrosse seasons and nearly every day between seasons. And she's convinced it's made a difference.

"I definitely have gotten so much faster," said Palmisano. "I've seen it with my starts and holding my speed."

As a freshman, Palmisano has indeed begun to make her mark. She made the varsity field hockey and lacrosse teams, starting this spring as an attack on the promising Raiders' team, and she has no doubt that the speed training has made a big difference.

"I was the fastest player on the field hockey team and one of the fastest in lacrosse," she said. "It makes a big difference."

Central coach Phil Rowley can't compare Palmisano to other fast players on his team, but he said: "She's definitely very quick, one of the quickest on the team and she has fairly good stick skills to go with it."

Being a hard worker, one might think that Palmisano could have progressed nearly as much on her own, but she seriously doubts it.

"I don't think I could ever do it on my own," said Palmisano. "They help you with everything — starts, proper form, keeping your speed ... and they keep you motivated."

"Jenna is a tough little athlete and she wants to do everything perfect, which makes it easier for us," said Castro. "Getting stronger and getting faster go hand in hand and she works hard at both."

Workouts at Parisi, and likely with any speed and strength program, can be grueling and some young athletes have a difficult time staying at it for any length of time, but Palmisano seems to thrive on it.

"They always seem to come up with new things to keep you going and I always like going," she said. "I know the more I practice, the faster and stronger I get."

Palmisani has the data to prove it because, like other programs, Parisi times their athletes periodically and she has shown dramatic improvement. Moreover — and this is one of the goals of the program — she has become much more confident in her athletic talent and potential.

"She is a fanatic, but you can see the results," said her mother. "Her leg strength and speed are so much greater and she's a lot more confident in everything she does."

Which is why, says Palmisani, she'll continue to receive the extra training. "I'll definitely keep going ... it can only help."

Anything to gain that extra edge.

There are countless programs in the Merrimack Valley that deal with enhancing an athlete's potential with speed, strength and conditioning. The two largest are:

— The Parisi Speed School, located locally at Cedardale in Haverhill, is part of a nation-wide organization that was founded 20 years ago and is located in 27 states.

— Boyle's Strength and Conditioning (or MBSC), founded by Mike Boyle and originally focused on the Boston Bruins and pro athletes, has major programs in Woburn and North Andover with a new one in Haverhill