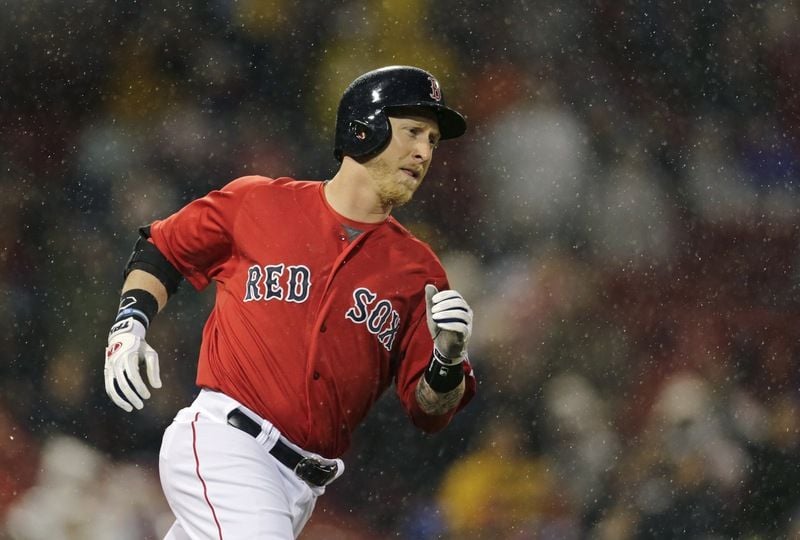 Mike Carp heads down the first base line after his three-run home run earlier this year. Carp is making a strong case to be Boston's starting first baseman next year. (AP Photo/Charles Krupa) 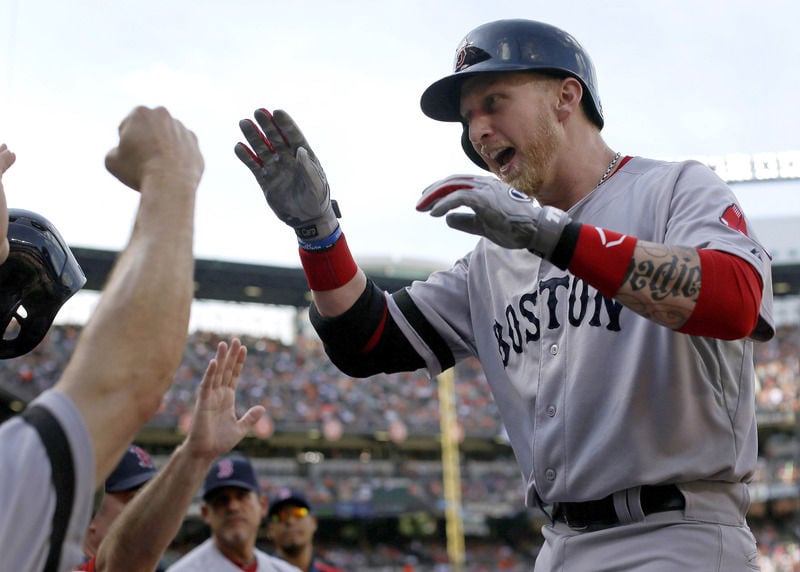 Mike Carp high-fives teammates after hitting a two-run homer earlier this year. He's having a strong season, which could be a stepping-stone to a starting job next year.

Mike Carp heads down the first base line after his three-run home run earlier this year. Carp is making a strong case to be Boston's starting first baseman next year. (AP Photo/Charles Krupa)

Mike Carp high-fives teammates after hitting a two-run homer earlier this year. He's having a strong season, which could be a stepping-stone to a starting job next year.

BOSTON — Mike Carp is a talented hitter. He knows that. But he has to be a little frustrated, right? After all, he turned 27 on June 30 and still hasn’t received his big opportunity to be a starter on a major league team.

“I can’t lie and say there hasn’t been times when it’s been frustrating,” Carp said. “That was before. Now, this year, it’s more about understanding and knowing my role and situation with the team and embracing that. Really, I think that’s what has led to my success this year.”

With all the success Cap has had this year, you have to wonder if he will receive his chance to be an everyday player soon, maybe even next year.

“Whether the playing time comes this year or next year, I’m kind of all gung-ho for whatever comes my way,” Carp said. “Since we’re playing winning baseball, that’s all that really matters.”

Red Sox first baseman Mike Napoli is signed to just a one-year contract. Considering Napoli’s hip situation and strikeout rate, the Red Sox certainly will look at other options before attempting to re-sign him.

Carp certainly is making a strong case to replace Napoli.

There are only a few potential free agent first baseman who are appealing. The most appealing of the group is Seattle’s Kendrys Morales who entered Friday batting .291 with a .347 OBP, 16 homers and 61 RBIs. The only other attractive options are Napoli, Justin Morneau, Mike Morse and Paul Konerko.

With slim pickings on the free agent market, the Red Sox will consider Carp for the starting job, but only if he continues to hit well the final two months. He has been received increased playing time as this year has progressed and as he has continued to produce. He will have his chance to strengthen his case.

Carp is under the Red Sox’ control for another three seasons.

He does hope the year he is having serves as a stepping-stone to a starting role.

“Everybody wants to go out there and everybody wants to be the guy,” Carp said. “But it’s not the way our team’s built right now. We can plug any number of guys in our lineup and be pretty competitive.”

Carp can play left field in addition to first base. He doesn’t feel more comfortable at one position over the other.

Carp said about the reason he has been so successful this year, “Just getting an opportunity to play and being healthy this year. Last year was kind of a bummer of a year. I was down, hurt all year long. Couldn’t get on track. Coming into this year, it was a new start, new organization, first place. It’s just been a good whirlwind. And it’s been a lot of fun.”