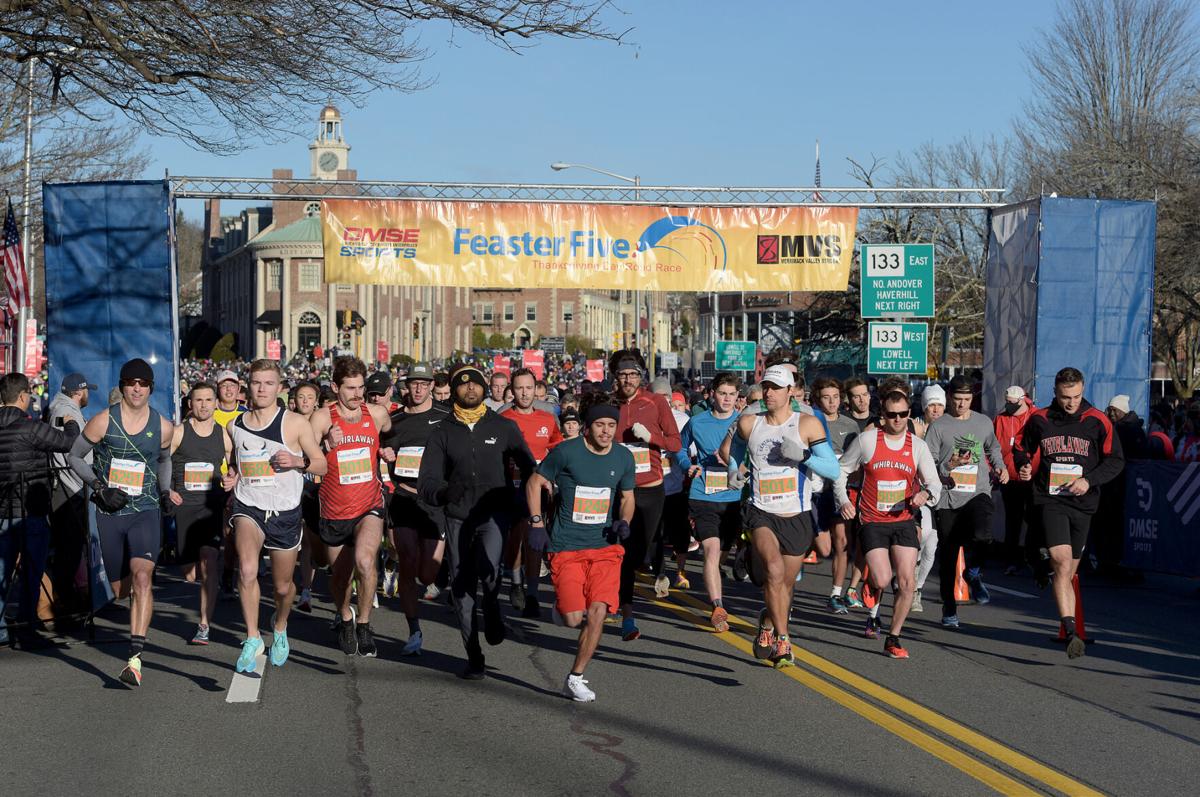 Runners take off from the starting line during the annual Feaster Five Thanksgiving Day Road Race in Andover. 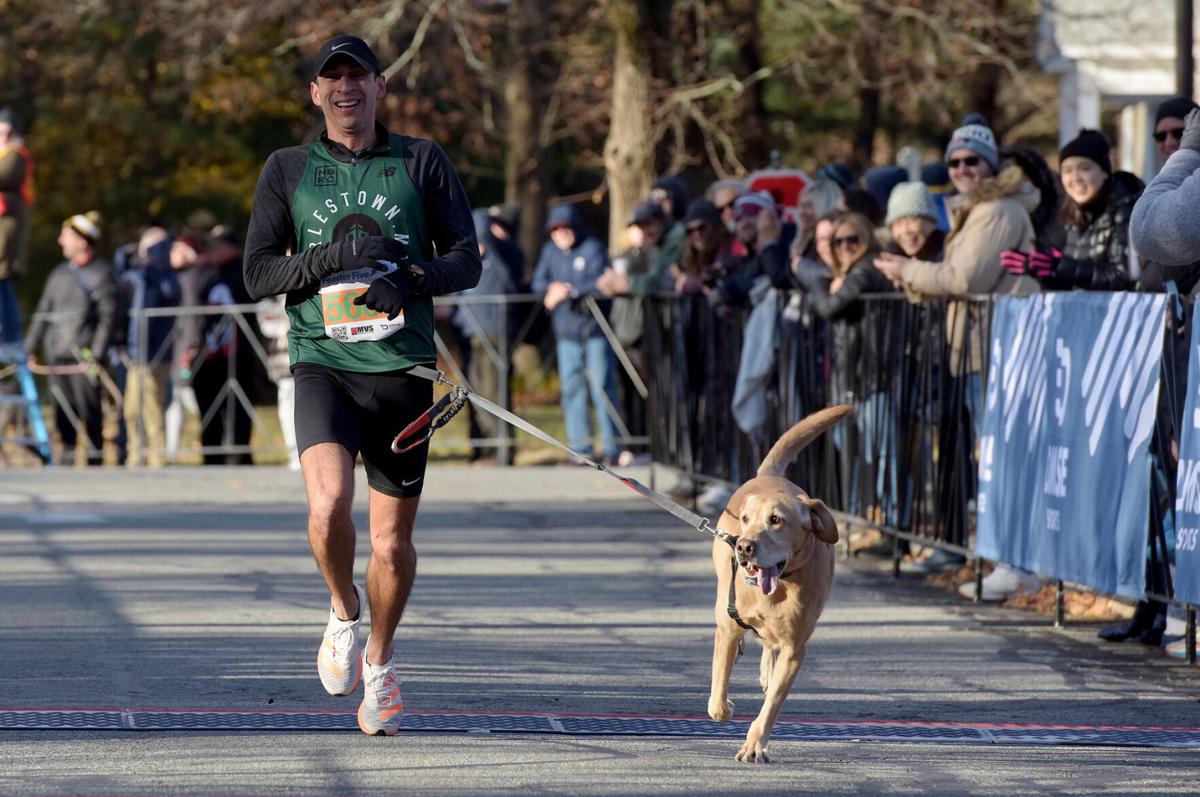 The first unofficial dog to finish was Merlot with his owner, Manuel Gonzalez of Boston. They are all smiles as they cross the finish line during the annual Feaster Five Thanksgiving Day Road Race in Andover. Gonzalez finished second in the 5K race. 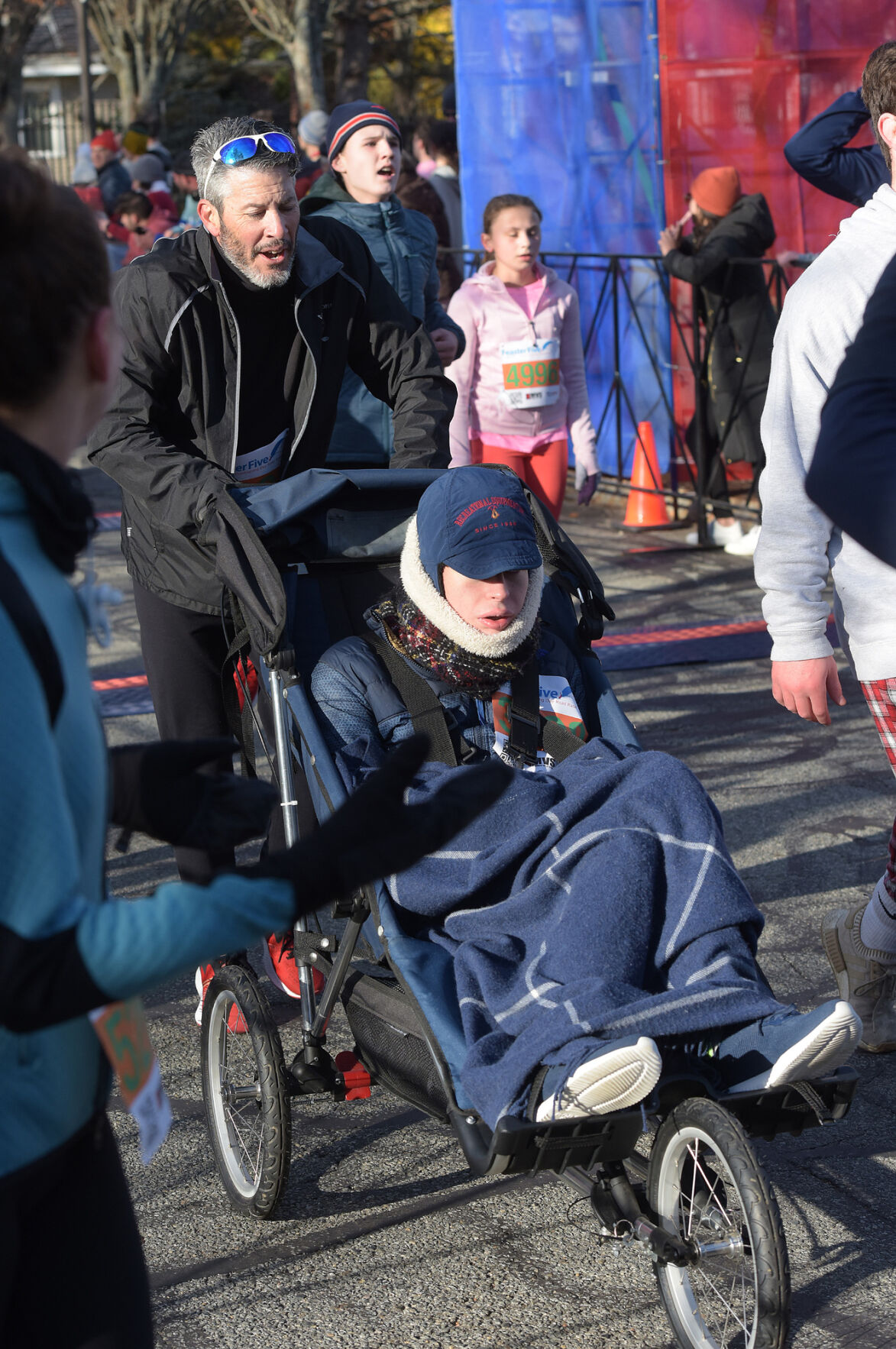 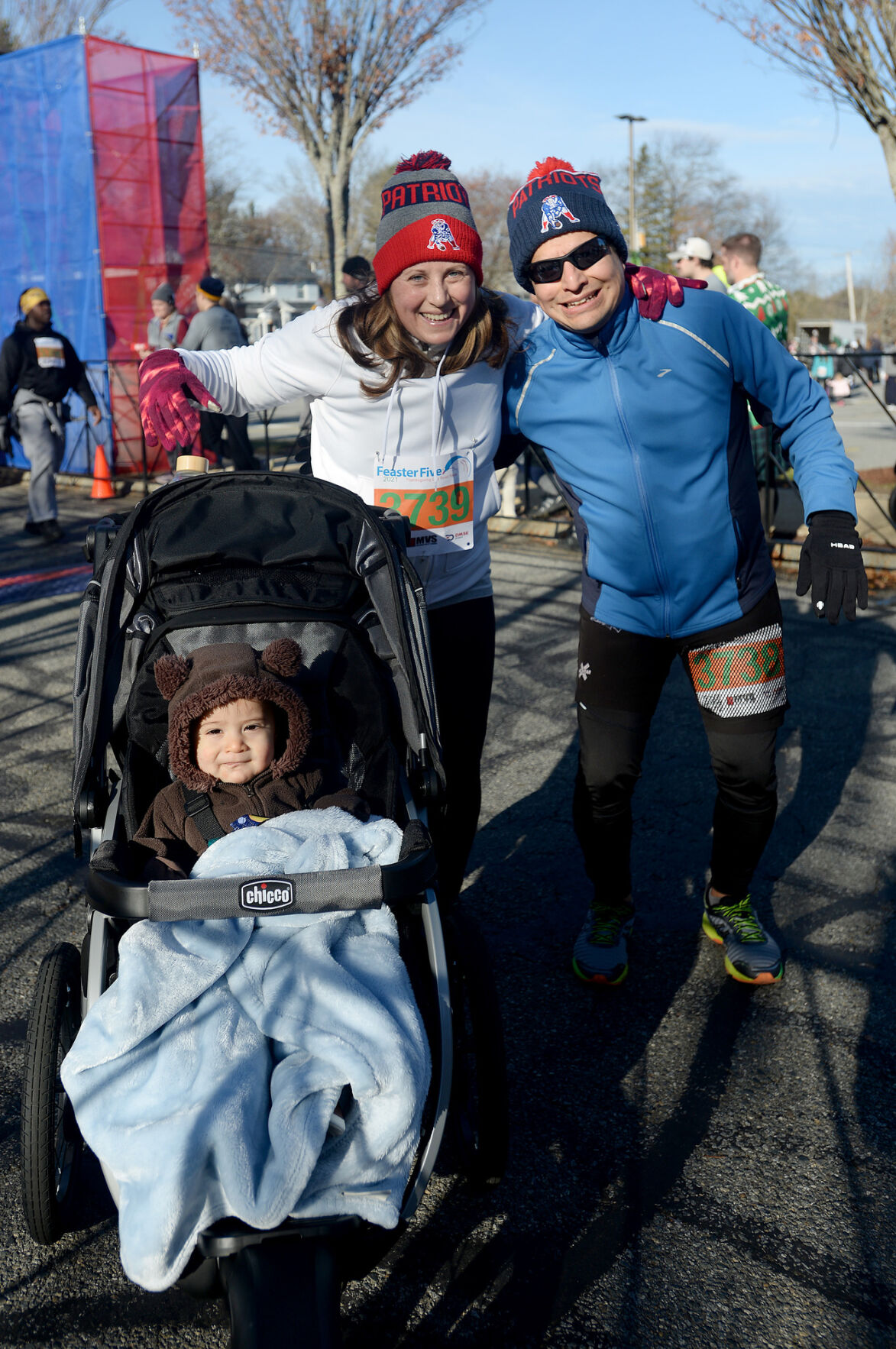 Lora and William Vasquez of Andover are all smiles after they finished the annual Feaster Five Thanksgiving Day Road Race in Andover.

Runners take off from the starting line during the annual Feaster Five Thanksgiving Day Road Race in Andover.

The first unofficial dog to finish was Merlot with his owner, Manuel Gonzalez of Boston. They are all smiles as they cross the finish line during the annual Feaster Five Thanksgiving Day Road Race in Andover. Gonzalez finished second in the 5K race.

Lora and William Vasquez of Andover are all smiles after they finished the annual Feaster Five Thanksgiving Day Road Race in Andover.

ANDOVER — That really loud sound you probably heard across the Merrimack Valley about 10 a.m. on Thanksgiving was not from a faulty generator at some local business.

It was Tom Licciardello, bellowing out a large “Whewwww!” near the finish line on York Street.

You see Licciardello is not only the voice of the Feaster Five Road Race, emceeing the prerace announcements at the start of the race and shouting out finishers’ names as they near the finish line.

He is also the face of the 34th annual Feaster Five.

He was among five or so people, of the then-upstart running club, the Merrimack Valley Striders, who thought it would be a good idea to sponsor a road race on Thanksgiving.

The rest is history.

The Feaster Five went from 300 runners, surviving an early snowstorm in Year 2, to adding the world’s best race director, Dave McGillivray, and becoming one of the best damn road races in the country.

The race allotted the club resources that most clubs envy, including thousands of dollars in donations to area charities, $20,000 annually in college scholarships, running programs for area kids, marathon coaching for their members, associations with Bill Rodgers and Joan Benoit, etc.

The popular club had become dependent on the race and its benefits.

Technically speaking, Licciardello & Co. at MVP got a taste of the trials and tribulations of sponsoring an event this big and mighty two years before the pandemic when temperatures and wind chill dropped to single digits. The Kids K race was canceled and there would only be a 5K race.

About 2,000 fewer people showed up on race day.

What does that mean?

While Lazarus House and other charities got the “perishables,” the unused hoodies – which are not cheap – have the race date on them. and Feaster Five participants expect a new shirt/hoodie each year.

Fast-forward to August of 2021 and Licciardello was talking to the T-shirt printers, who needed their “number.”

You have to remember, Gov. Charlie Baker had originally ruled that road races could happen, but then there was “banter,” that because of higher positive results with COVID-19 again, the race could end up going virtual like last year when there were about 1,900 participants.

There was also the supply chain issues at our ports. Vendors needed their “numbers” earlier if you wanted them.

Ironically, Licciardello a financial planner by trade, is usually pretty good at predicting the future.

While he wasn’t really near that number, believing it could go to 4,000 or so, he worked the phones over the last two weeks as online entries in November doubled those from July through October.

Those new rush-job long-sleeve T-shirts cost 40 percent more than those ordered in August. Licciardello had to order twice as many Kids K medals, which didn’t look as good as the originals.

“Was I nervous? Are you kidding me? I was a wreck,” Licciardello said.

As a weary Licciardello was cleaning up his area at the announcing table at the finish line on York Street, someone asked him his assessment of the 2021 Feaster Five.

For a few seconds, his weariness turned into his vintage ear-to-ear grin.

“We’re back!” Licciardello said. “The Feaster Five Road Race is back.”

Next year is the 35th annual, which means it will have an extra flair or two and probably somewhere close to 10,000 participants again.

As for Licciardello’s part-time job as a successful race director, he smiled again.

“As Dave McGillivray says, ‘Being a race director is perfect job security,’” said Licciardello. “’Nobody wants this job.’”