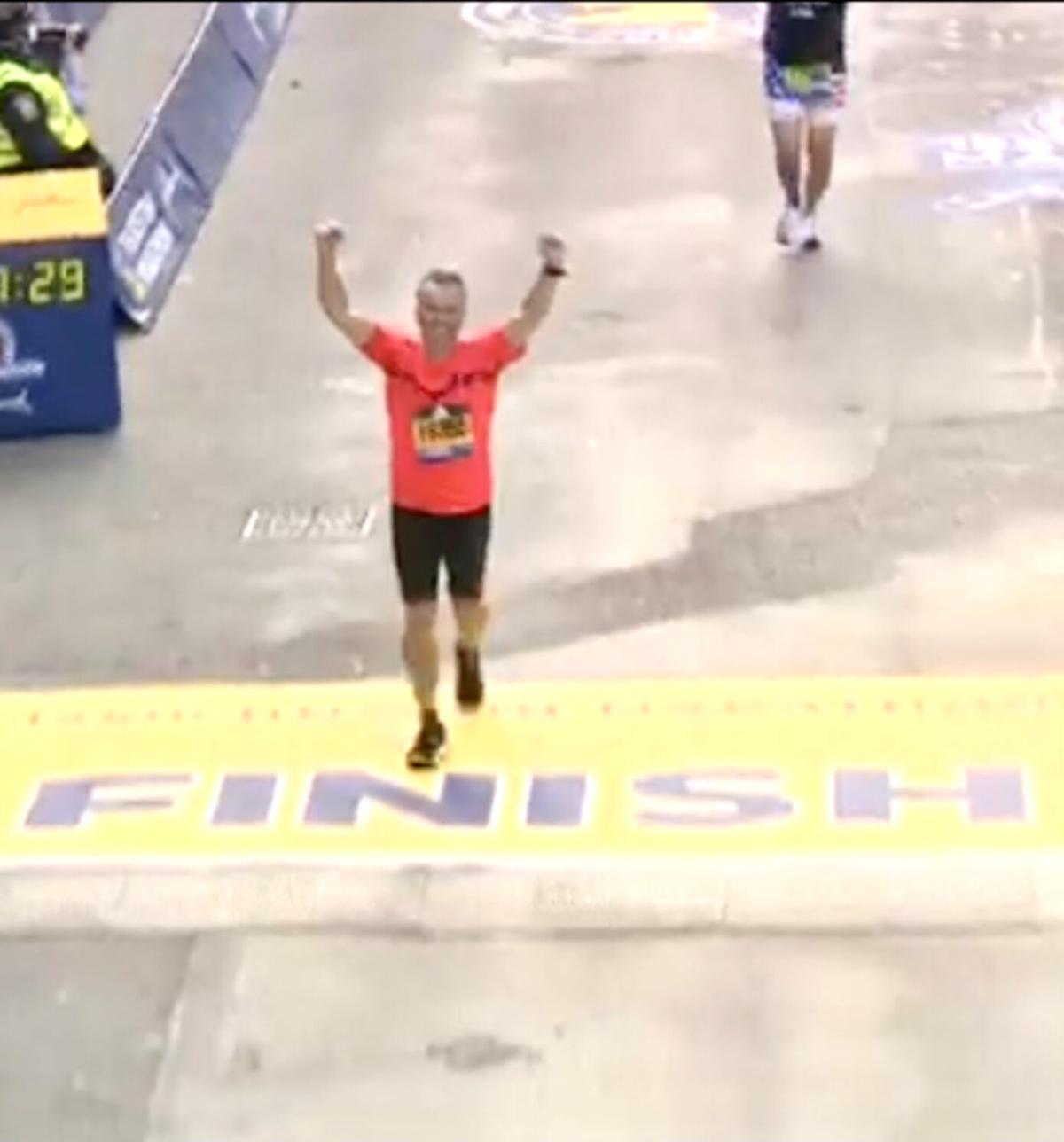 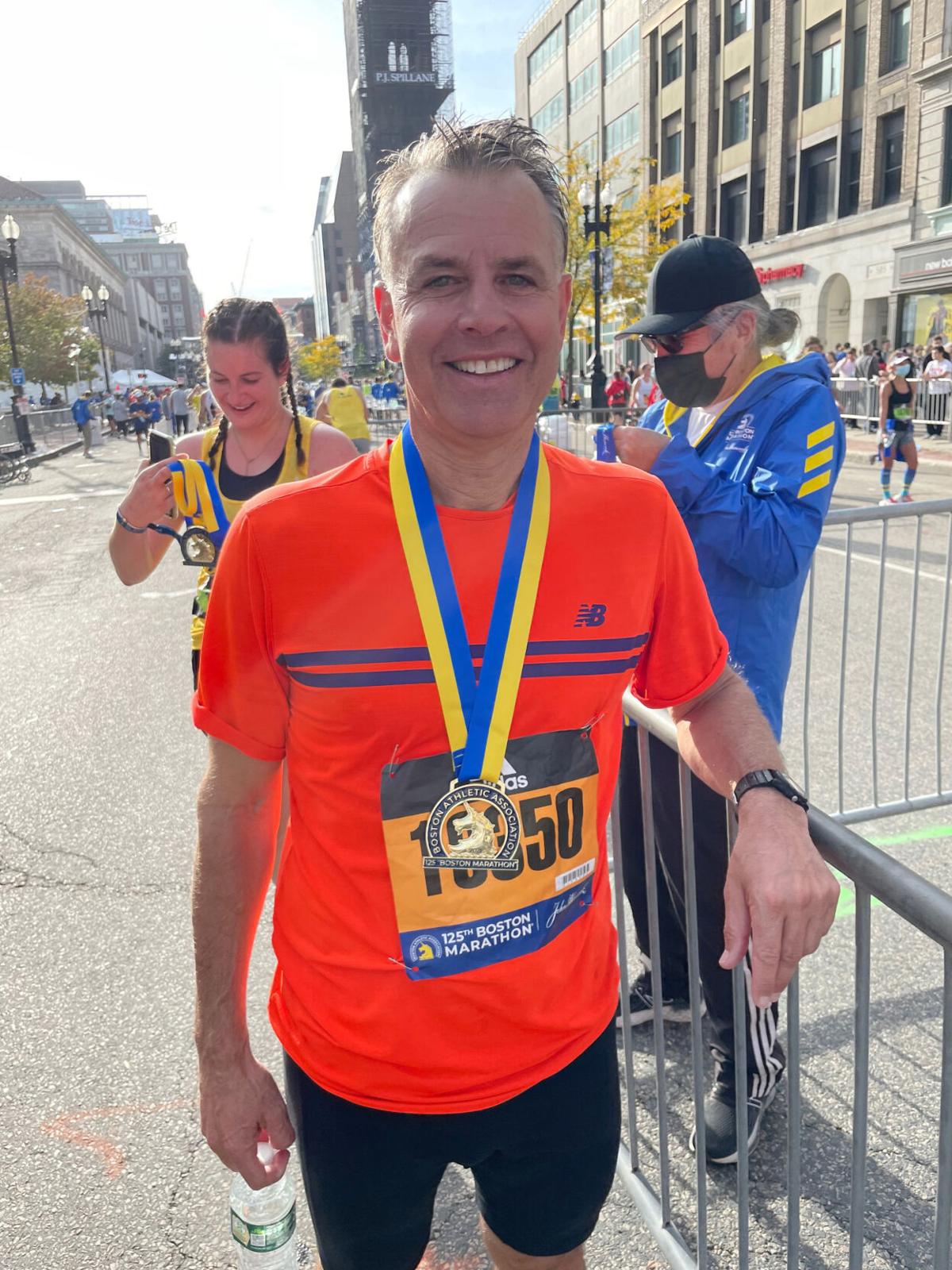 Steve Cooper had many excuses, some legitimate, not to run the 125th Boston Marathon on Monday.

Starting with his left hamstring, which he pulled in late June.

“I thought it would go away in three days, like it did when I was 28,” said Cooper, of North Andover and long-time Ch. 7 news reporter. “It didn’t … probably because I’m 58.”

There were other “excuses” at his behest.

He had never run a marathon in the fall.

He wasn’t able to train anywhere close to the others, because of the injury.

Colds and COVID-19 tests were rampant in the Cooper household – everybody was fine.

“I guess I just never bought in mentally that the Boston Marathon was going to take place in October,” said Cooper, who runs religiously four to five times a week, including every Sunday morning.

“My mind is usually on the Feaster Five and getting ready for Thanksgiving,” said Cooper. “It felt weird, even training in the summer for Boston. Usually, it’s the winter and early spring, when it’s cooler.”

There were a few key events that occurred that changed his thinking.

One was running into Boston Marathon legend Dave McGillivray, who was preparing for his 49th consecutive race.

“I told Dave, ‘I’m hurting’ and ‘didn’t feel great,’” recalled Cooper. “Dave sort of bluntly says, ‘Everybody is hurting right now.’ He was right. Hell, he’s run almost 50 straight Bostons and basically run all over the world. It sort of got me back on track. and ‘Quit complaining.’”

But then three weeks ago, there was a tweak to the hamstring. He limped home from his jog that day, basically realizing the 125th Boston Marathon probably wasn’t his race.

As the race got closer, his “hammy” felt better and he ran 11 miles, as his “long, prep” run for the marathon.

Mind you, most marathoners in full training will do runs of 14 miles, 16 miles and 20 miles, getting the body acclimated to three or four hours on the road.

“My hamstring killed all of those runs,” said Cooper. “So then I start getting nervous. Am I ready to run?”

Race day approached like a locomotive. Before he knew it, “race day” was here.

“I was home watching the Red Sox that incredible marathon game the night before [Christian Vazquez walk off homer] that lasted two hours longer in extra innings,” said Cooper. “It was awesome, sort of surreal.”

The morning of the race was, of course, different too. Cooper took a bus to the starting line in Hopkinton. The rules were that runners were to go straight ahead toward the starting line, from the bus, as part of a “rolling start.”

“It was strange,” he recalled. “There were no spectators, just volunteers. I wasn’t really sure what was happening until we kept walking and I knew the chutes were coming and the starting line was just over the hill. I realized there was no going back now.”

Then it seemed a little normal, at least the running part, with not so many fans cheering runners on.

It wasn’t until Natick, where the crowds got big and very loud. In other areas, not so much.

But as the race transpired, Cooper, being a little careful with a slower pace, due to his shaky hamstring, was all-in.

“When I made the turn from Hereford to Boylston it was deafening,” said Cooper. “There were stacks of spectators, tens and tens stacked behind each other. It was then it started hitting me.

“I thought of the bombings in 2013 and the times I ran in bad weather,” said Cooper. “Everything hit me at once.”

He started getting emotional.

“I was running alone at one point. Nobody was around me,” said Cooper. “It was like everyone was cheering for me. I lifted my arms in the air. It was one of the greatest feelings I ever had.”

He admitted to repeating what David Ortiz said on the field at the next home game after the bombings.

“I yelled ‘This is our (bleeping) city!’” said Cooper. “Of course, nobody could hear me because it was loud. But I said it.”

He crossed the finish line officially finishing his 16th straight Boston Marathon in 5:14.05 with a smile from ear to ear.

“Those were surreal moments in my life,” said Cooper. “I honestly felt like I was flying through the air, floating down Boylston Street. It really was the best Boston Marathon of them all for me.”