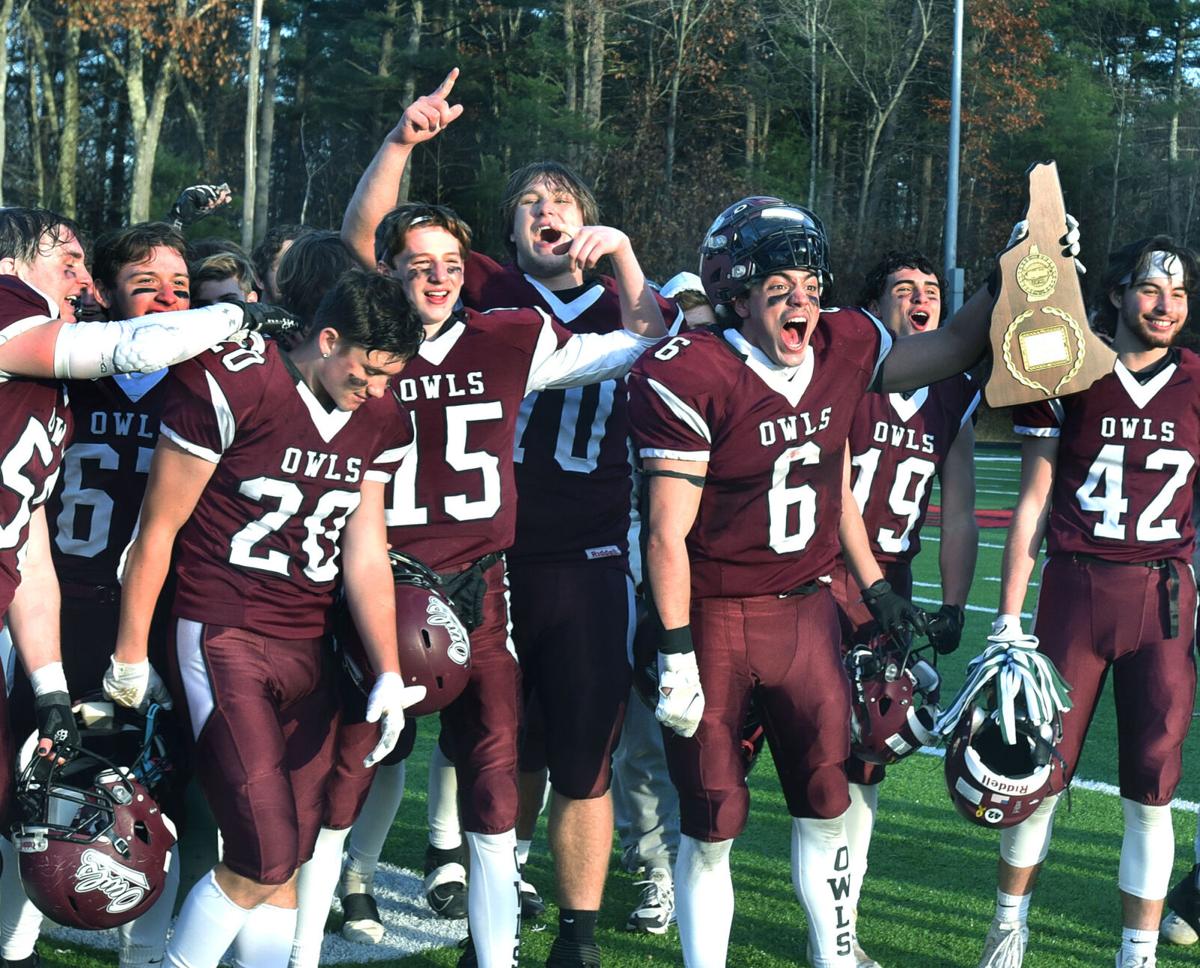 Timberlane’s Dominic Pallaria (6) celebrates with his teammates while holding the championship plaque after the Owls won the Division 2 state title beating Milford 13-10. 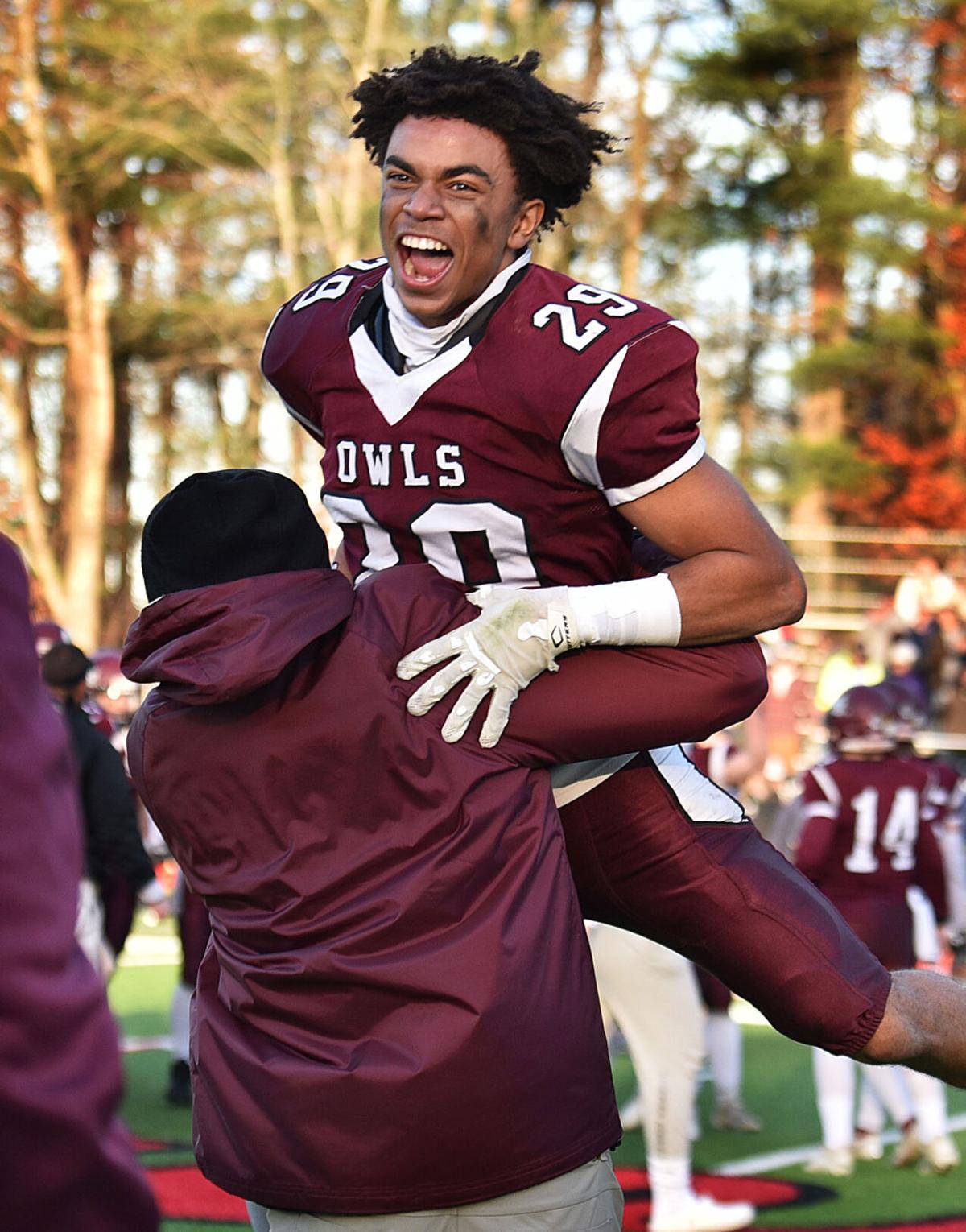 Timberlane’s Jaden Mwangi leaps into the arms of a Timberlane coach as he celebrates Saturday’s Division 2 state championship victory. 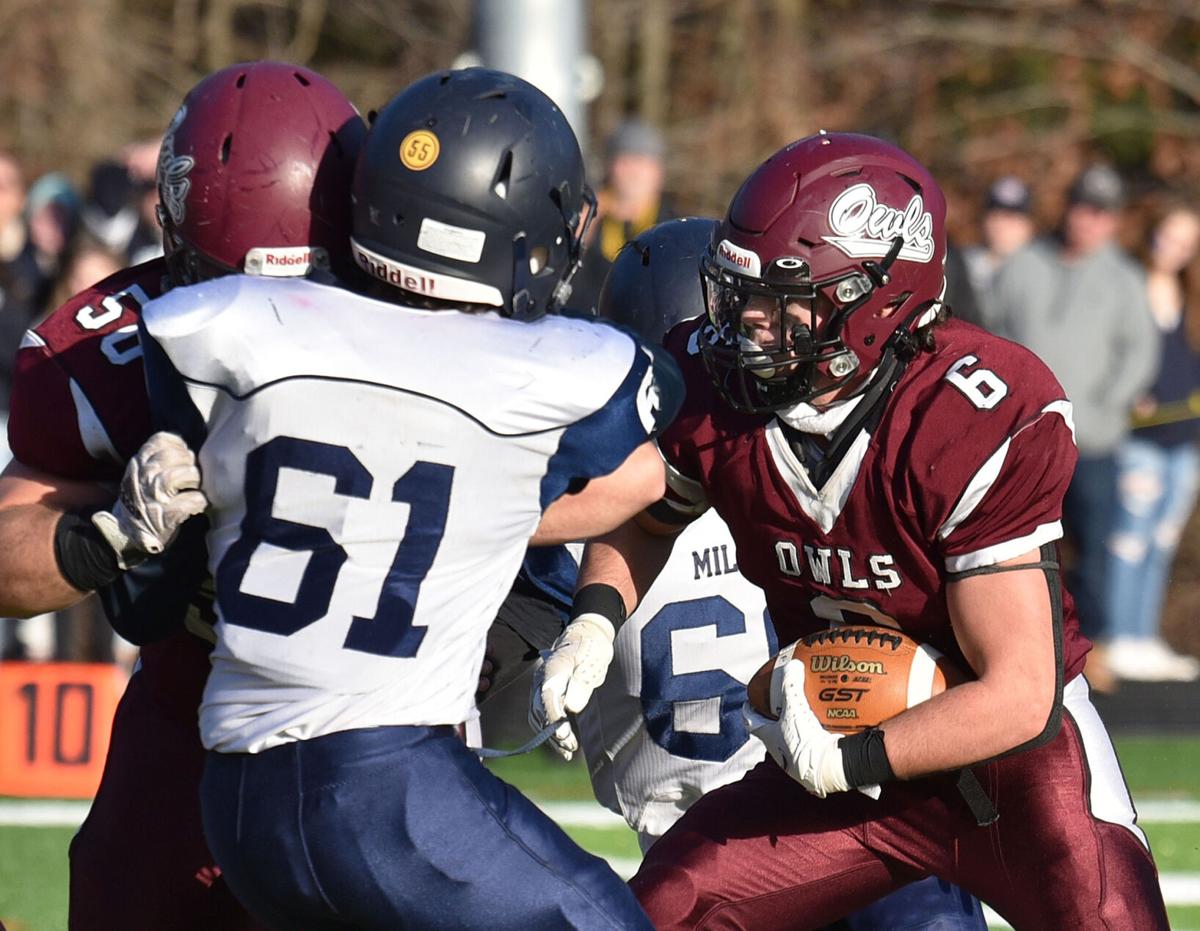 Timberlane's Dominic Pallaria picks up yardage with a block from Cooper Kelley in the Owls' Division 2 state title victory on Saturday. 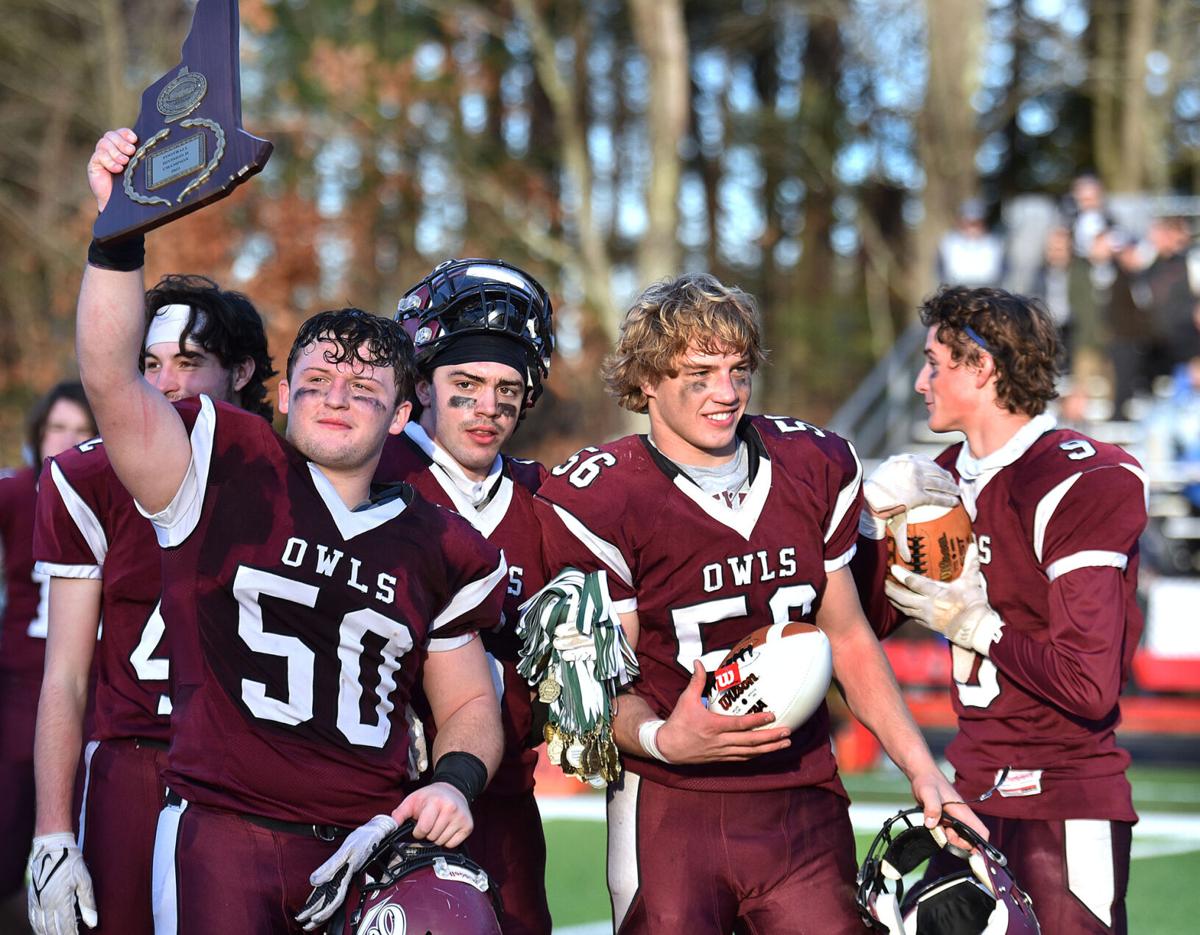 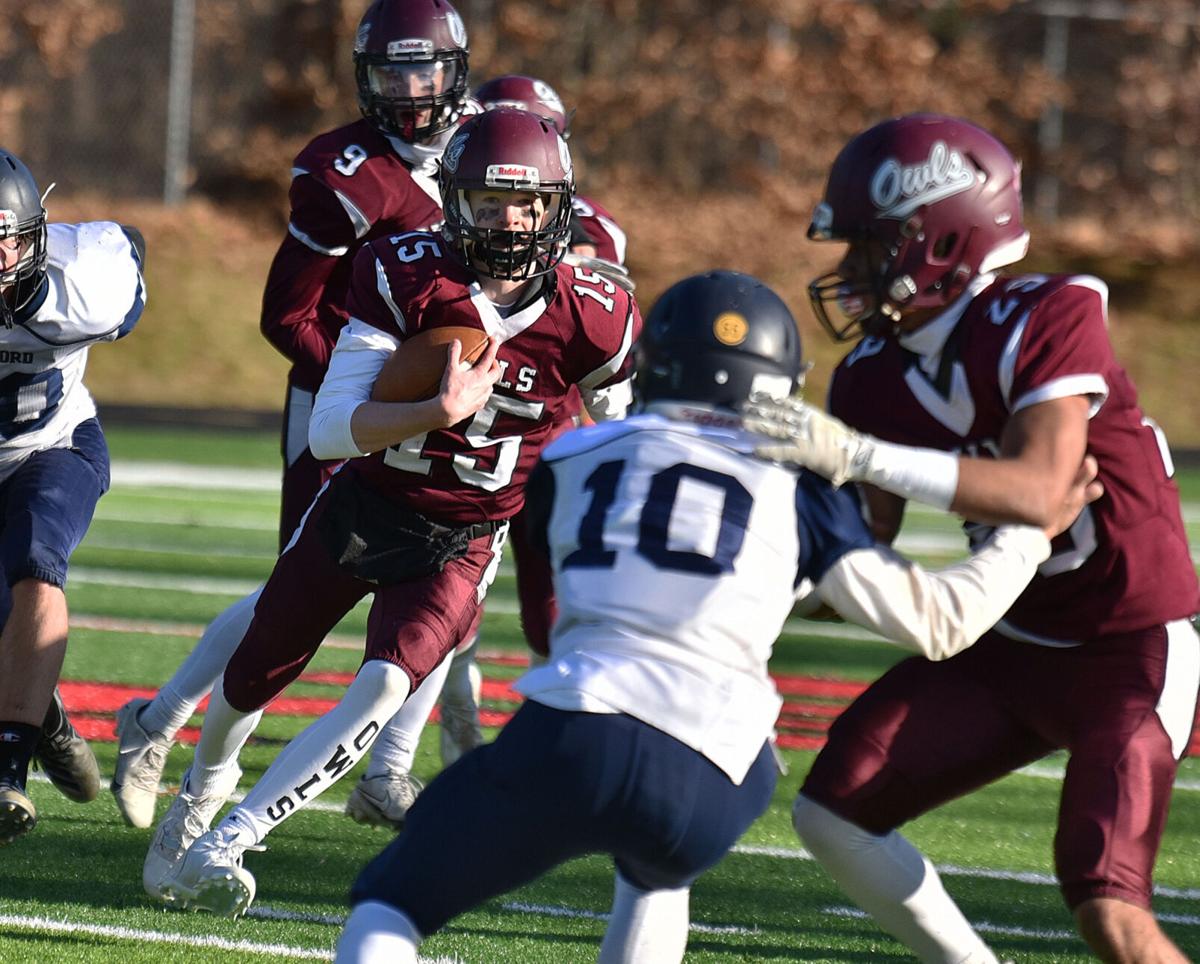 Timberlane's Gary Shivell maneuvers around players for more yardage against Milford in the Division 2 title game. 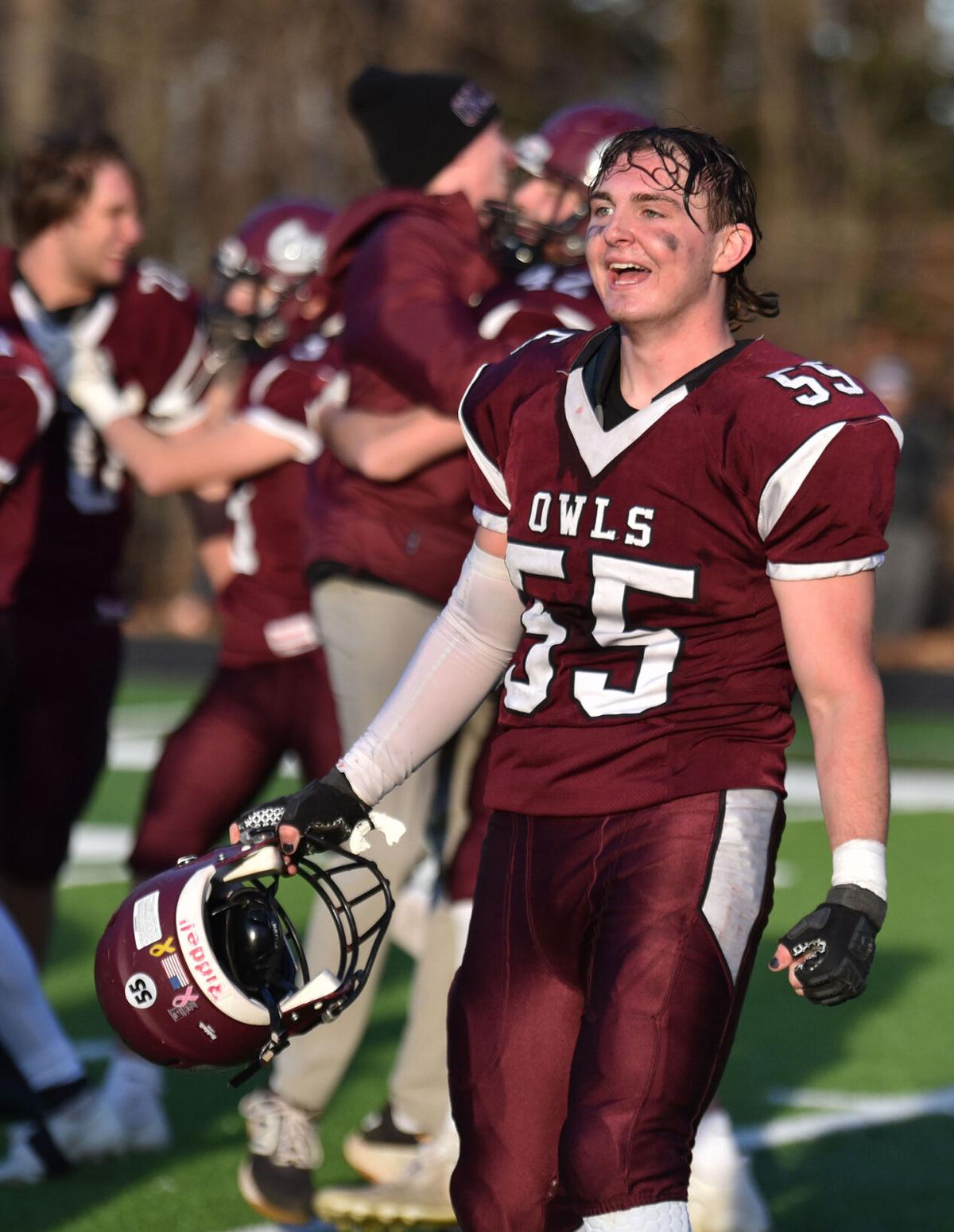 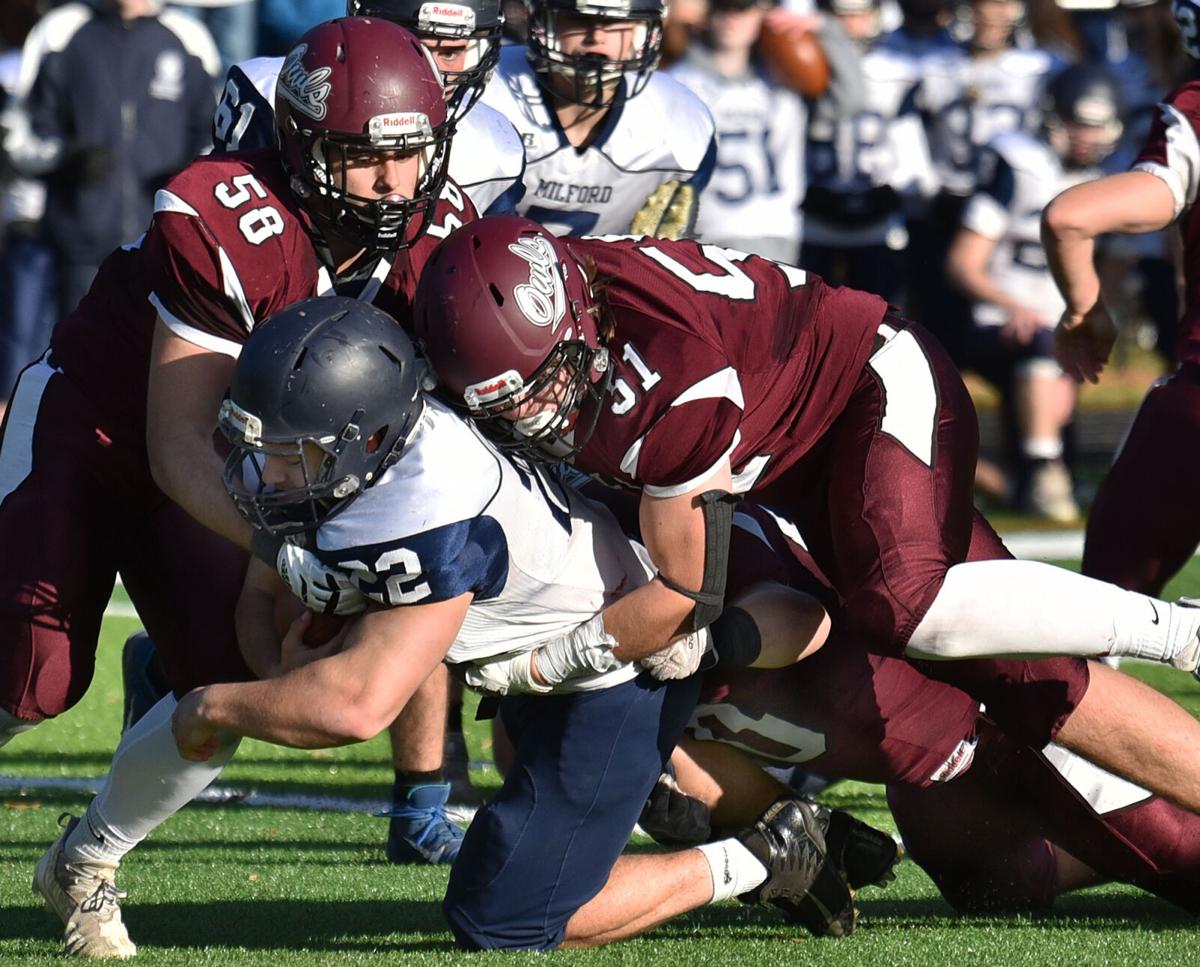 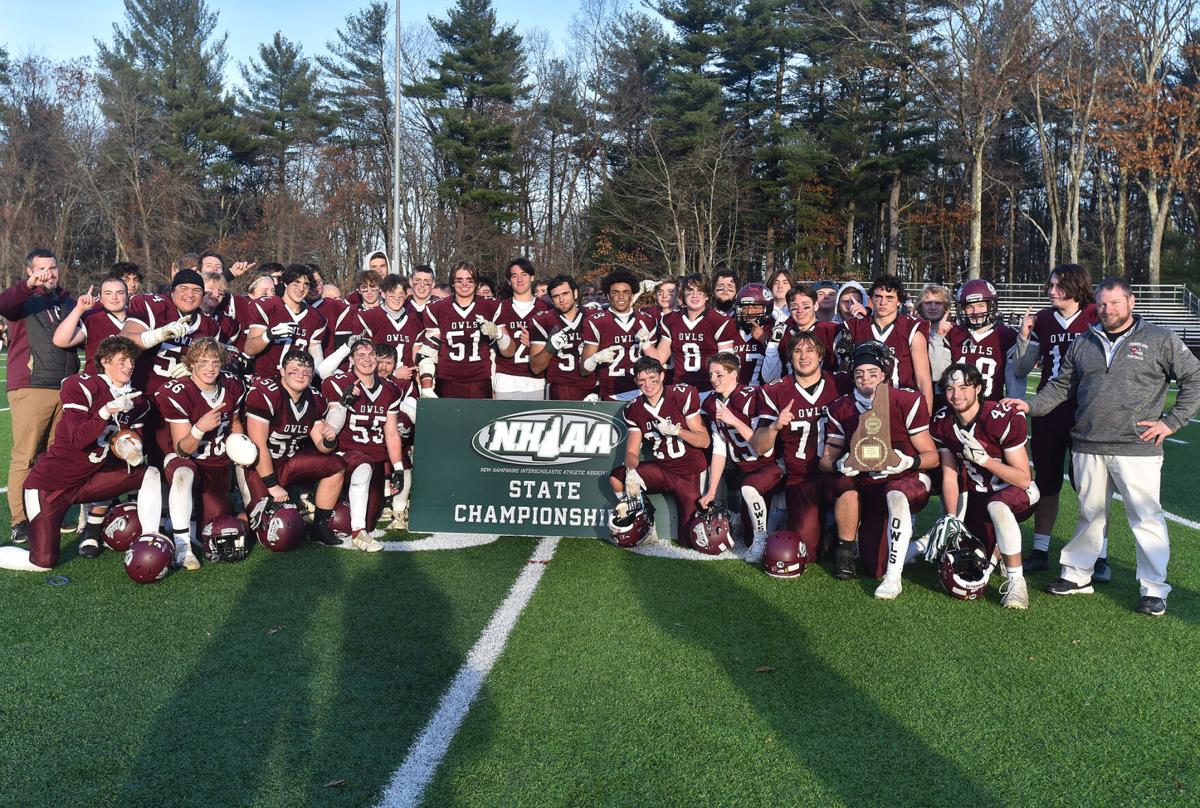 Timberlane’s Dominic Pallaria (6) celebrates with his teammates while holding the championship plaque after the Owls won the Division 2 state title beating Milford 13-10.

Timberlane’s Jaden Mwangi leaps into the arms of a Timberlane coach as he celebrates Saturday’s Division 2 state championship victory.

Timberlane's Dominic Pallaria picks up yardage with a block from Cooper Kelley in the Owls' Division 2 state title victory on Saturday.

Timberlane's Gary Shivell maneuvers around players for more yardage against Milford in the Division 2 title game.

DERRY — Bo Schembechler would have been proud.

Years ago, the legendary University of Michigan coach always insisted that the keys to winning championship football games are defense, the running game and kicking.

Which is exactly the formula that Timberlane used Saturday afternoon at Pinkerton Academy as the unbeaten Owls (12-0) defeated Milford 13-10 to capture the Division 2 state title.

It wasn’t pretty but it certainly was effective.

Timberlane held Milford to just five first downs and less than 100 yards rushing and passing while — fueled by senior Dominic Pallaria (160 yards rushing on 28 carries) — it rushed for 234 yards.

Schembechler would have been smiling after this one and saying “I told you so!”

“I thought we played pretty well in all phases of the game,” said Fitzgerald. “It was a good team effort on both sides of the ball. The kids worked hard for this and deserve it.”

The Owls never trailed in the game and took a 7-0 lead early in the second quarter when Pallaria broke loose on a 51-yard TD run.

Milford responded two possessions later with a 36-yard field goal by Colin Gregg, but the Owls came right back to make it 10-3 when Bloom booted a 36-yarder of his own.

Timberlane dominated the third quarter, running 16 plays to just four for Milford, and took a commanding 13-3 lead early in the fourth on a 21-yard field goal by Bloom.

Milford then put together its only sustained drive of the game, 61 yards in 11 plays, and scored on a 7-yard run by Caden Zelesky with 3:33 left to play.

But the Owls didn’t give up the ball again and were soon celebrating their state championship.

“It feels good,” said Fitzgerald. “I thought we had the potential to do this when we won at Plymouth (28-13 back in September). We’ve got a good group of character kids and they worked hard to get this done.”

No one worked harder on this day than the defense, which frustrated Milford all afternoon, led by linemen Cooper Kelley and Evan Roeger. Kelley was in on seven tackles, one more than Roeger, and had two stops for losses.

Braden Perras was credited with six tackles while Joseph Shivell and Niko Langlois were in on five tackles each.

“The defense has played well all year and today was nothing different,” said Fitzgerald.

Except that it delivered big time in the most crucial game of the season.

OWL NOTES: Timberlane’s offense was productive despite missing starting halfback Dan Post, who was out with an ACL injury. Sophomore Eddie DiGiulio filled in admirably for him. Post will return next year. ... QB Gary Shivell did a nice job running the ball, gaining 55 yards on nine carries ... Timberlane’s defense seemed prepared for everything, including a fake punt on fourth down in the second quarter which failed to produce a first down. ... The Owls’ last state championship on the gridiron was in 2001, when it defeated Bishop Guertin 26-21 with Mike Pariseau as the head coach and Eagle-Tribune MVP Kyle Harrington the bruising fullback.