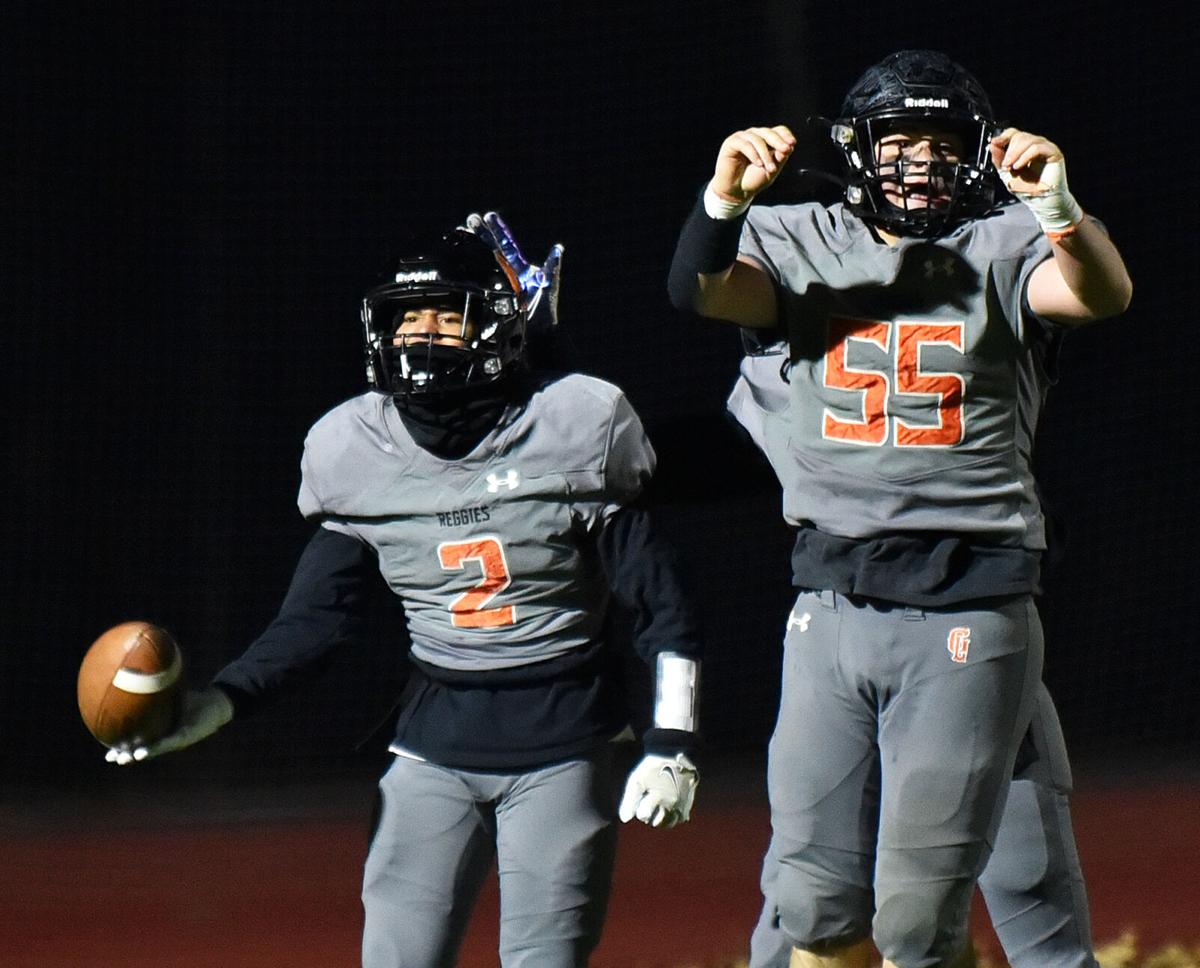 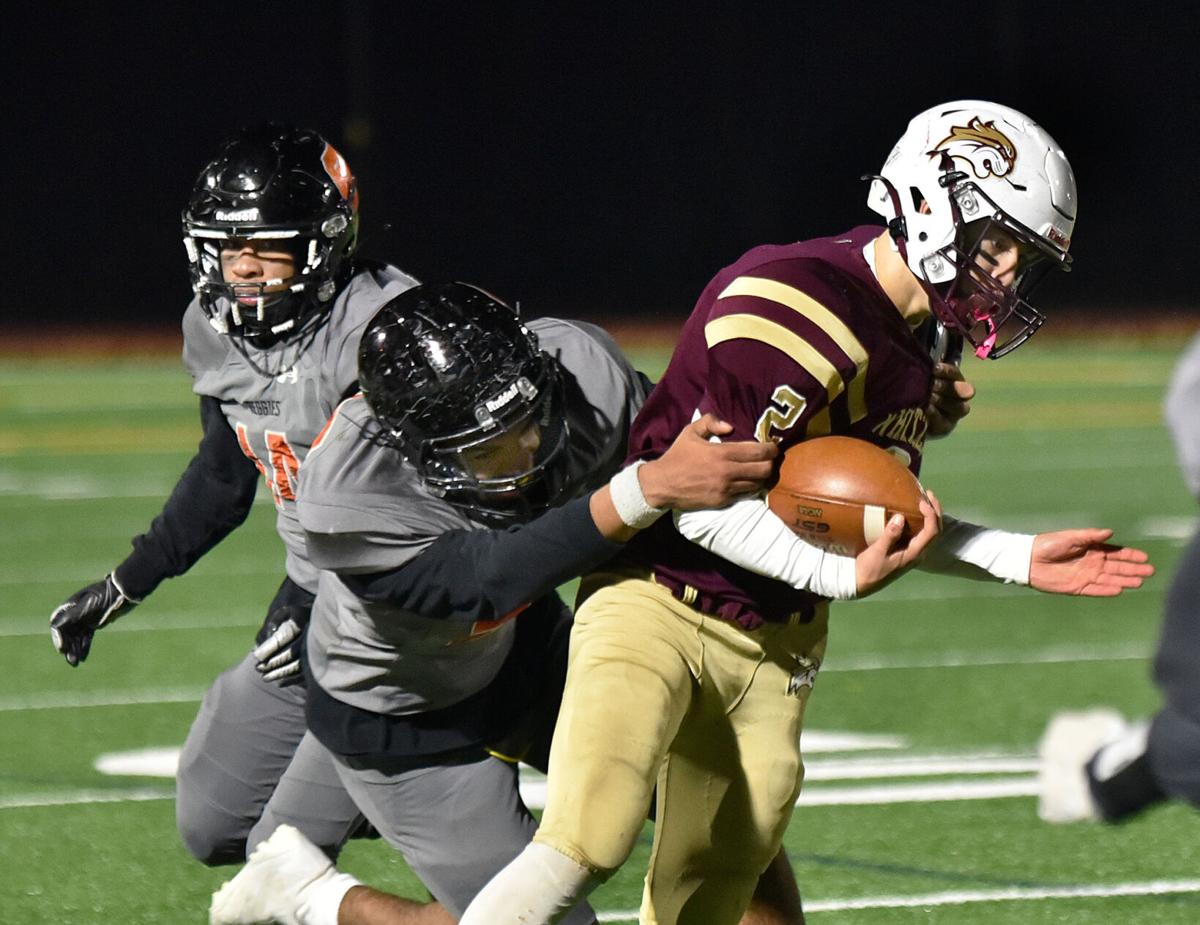 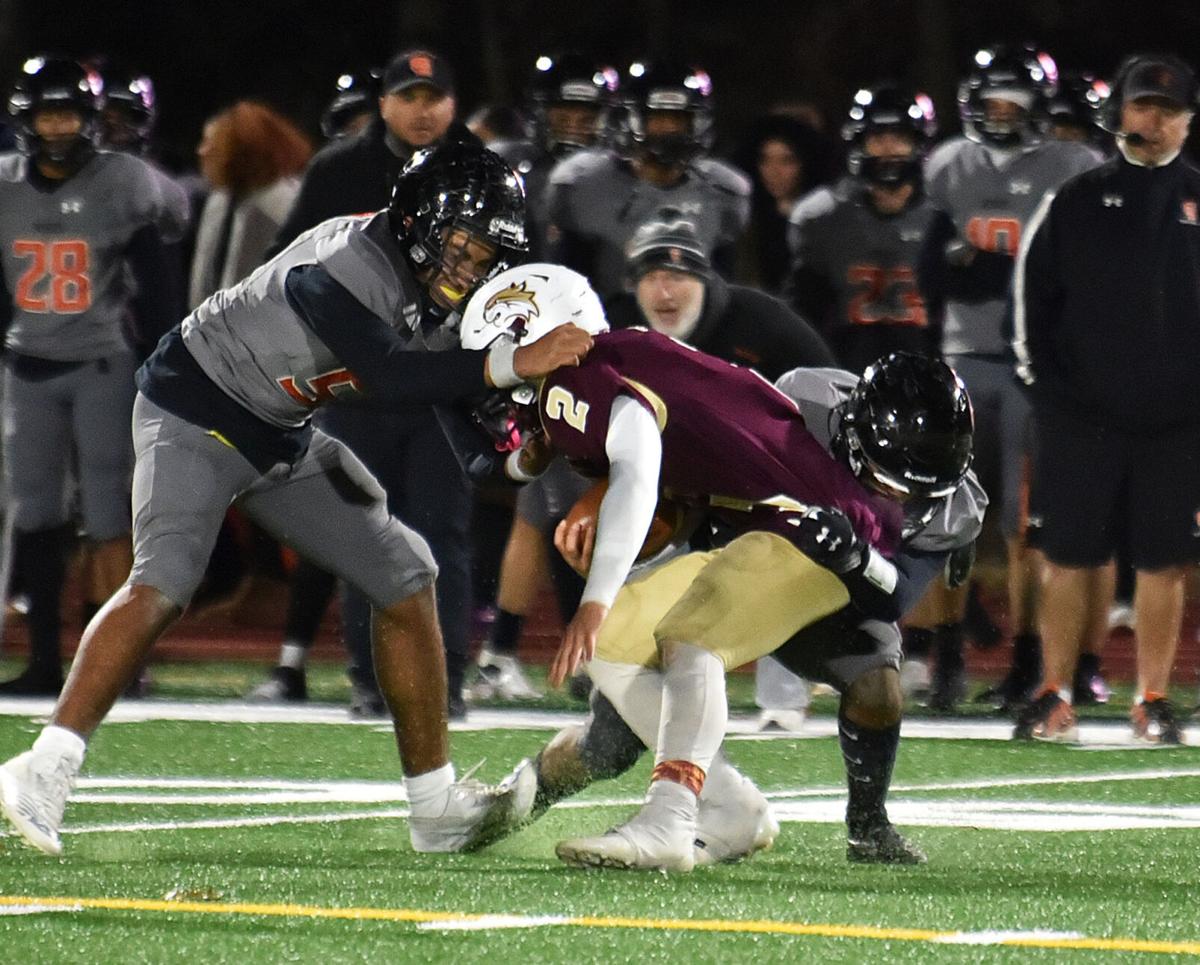 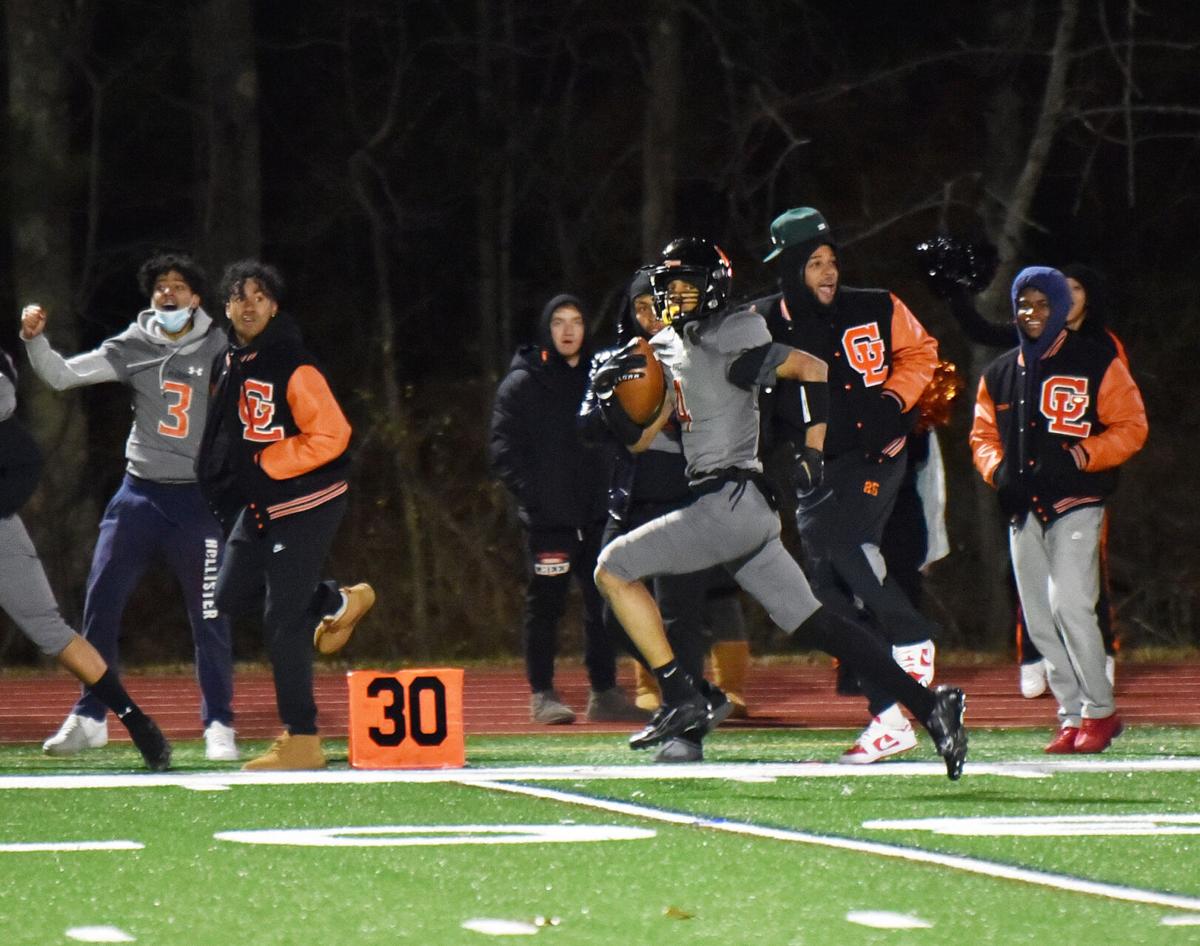 Greater Lawrence’s Adriane Morales sprints down the sideline for the Reggies’ first touchdown in an upset of Whittier in their annual Thanksgiving Eve game. 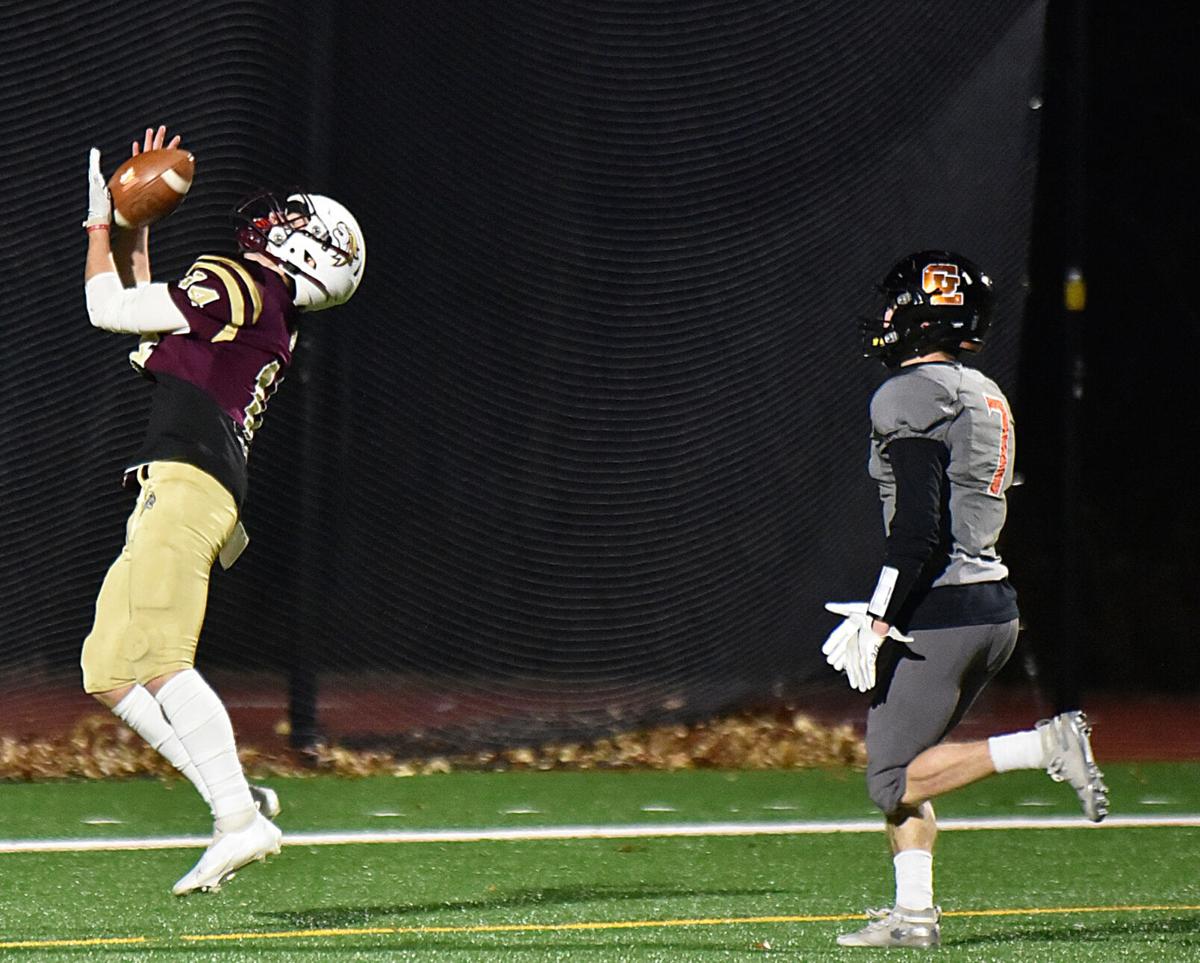 Greater Lawrence's Casey Neilon, right, is unable to catch Whittier's Niko Burke as he makes the catch in the end zone for the Wildcats' first touchdown on Thanksgiving Eve. 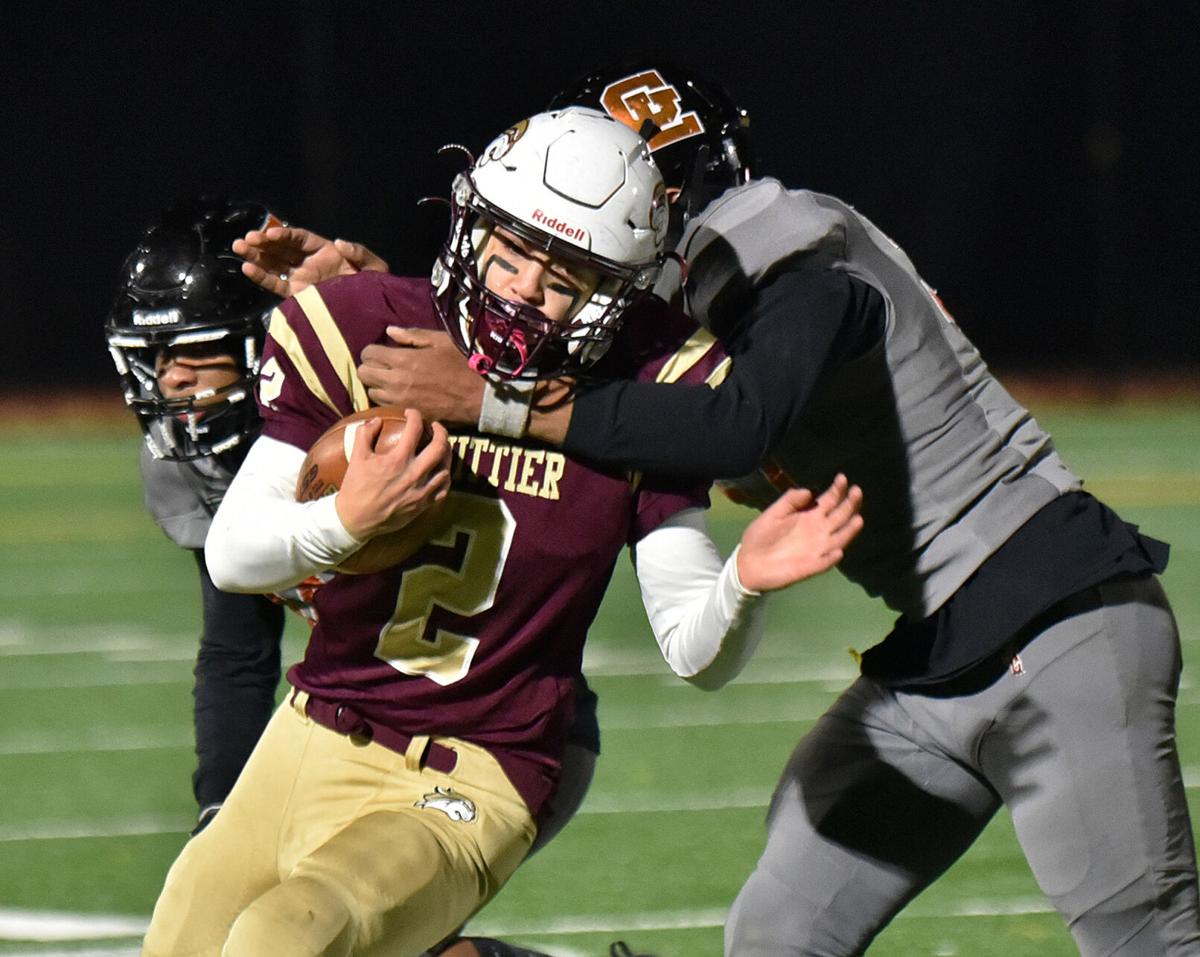 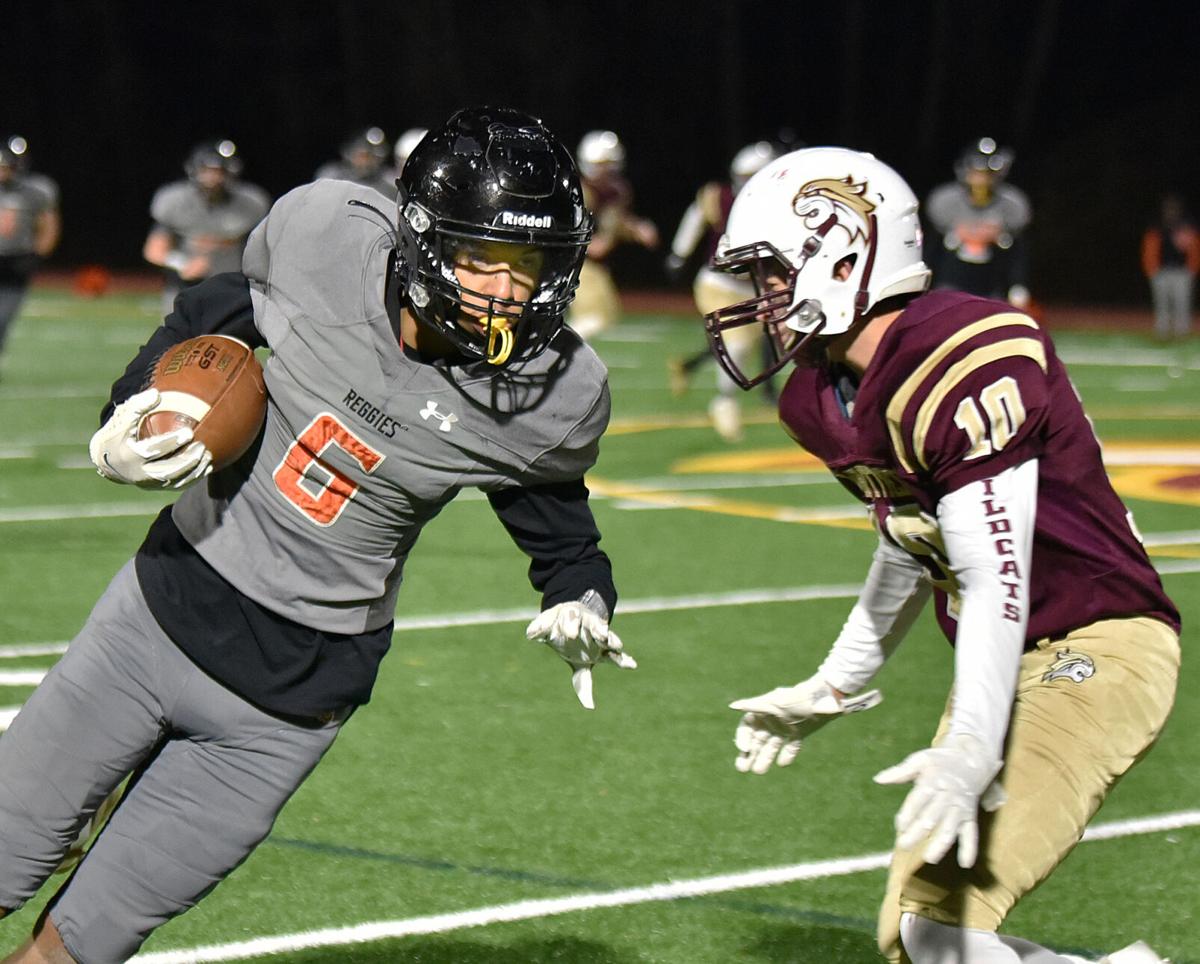 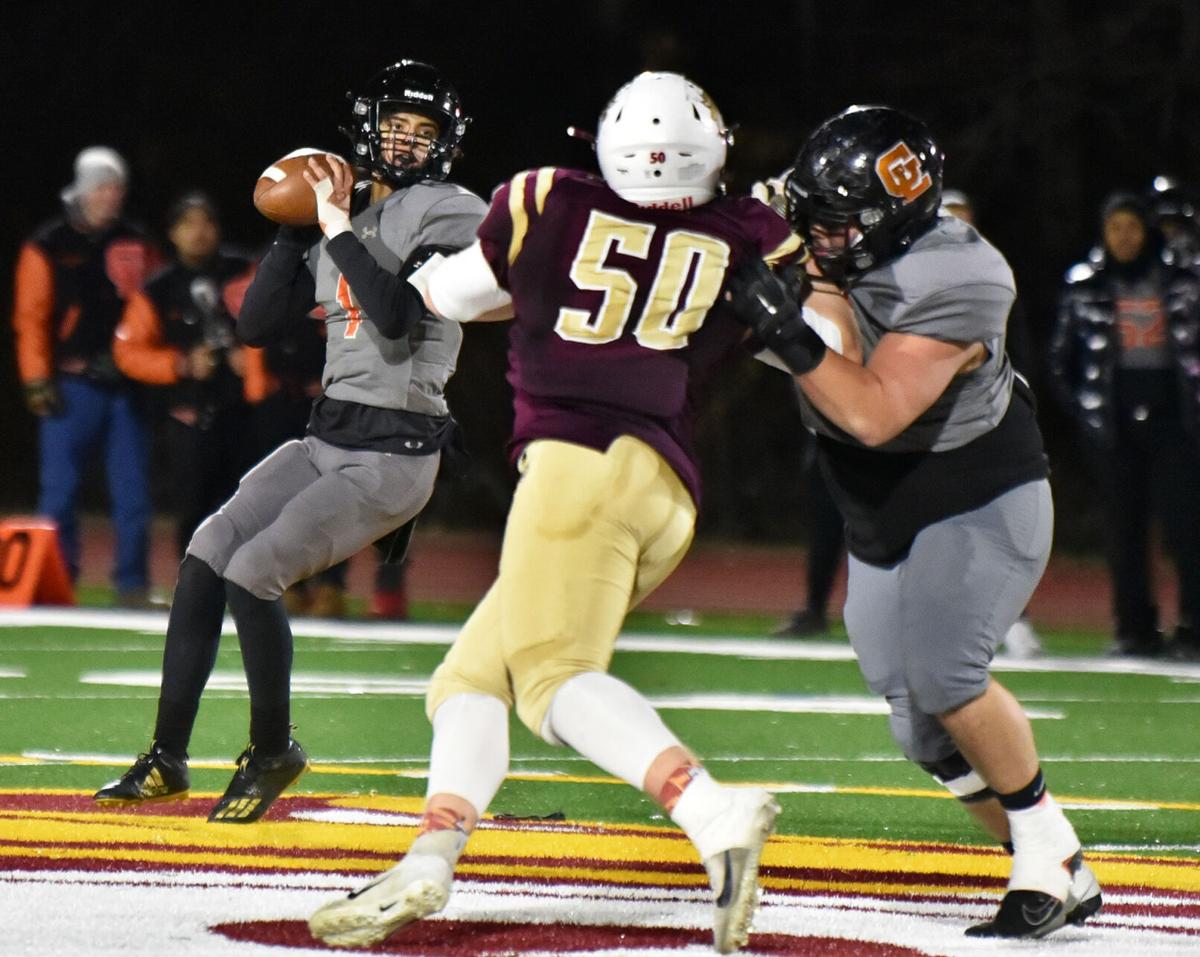 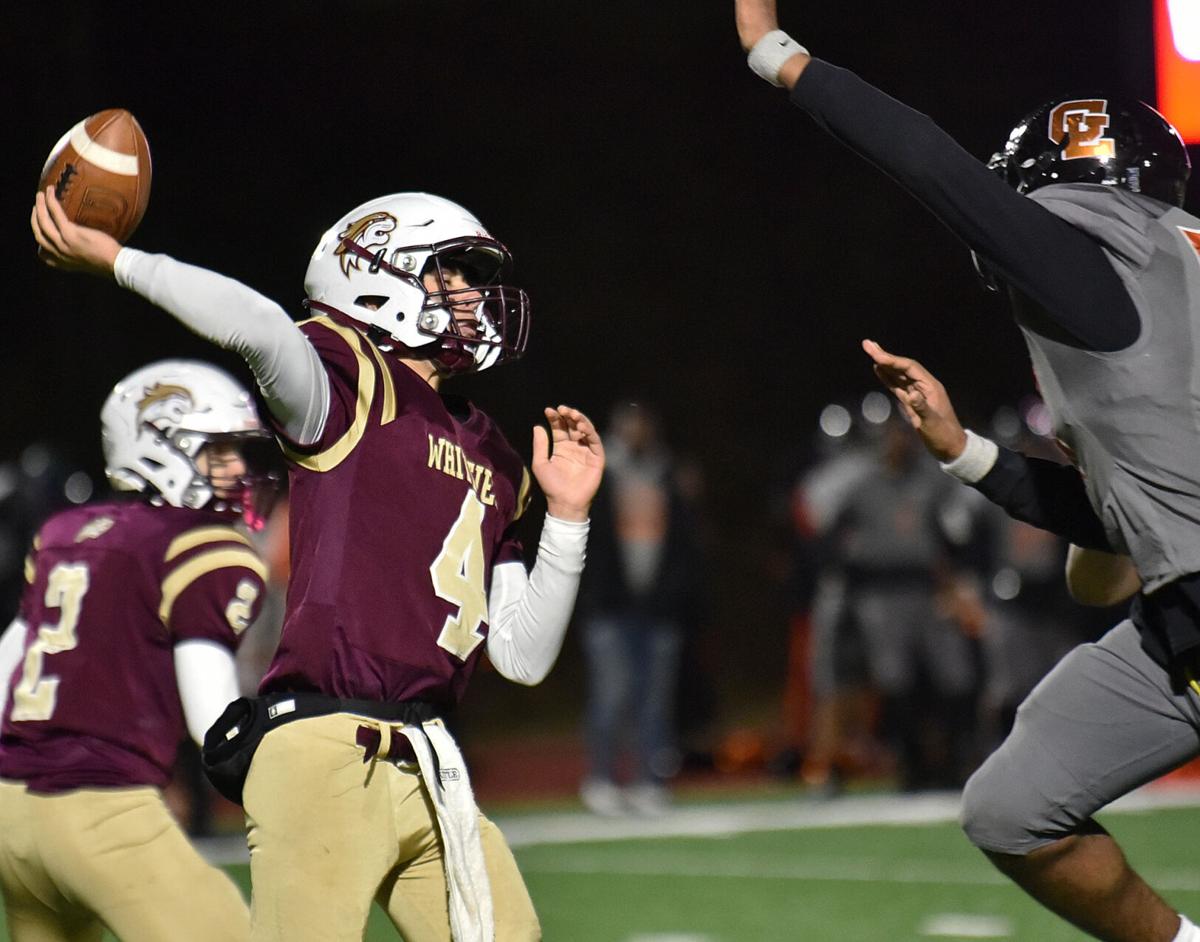 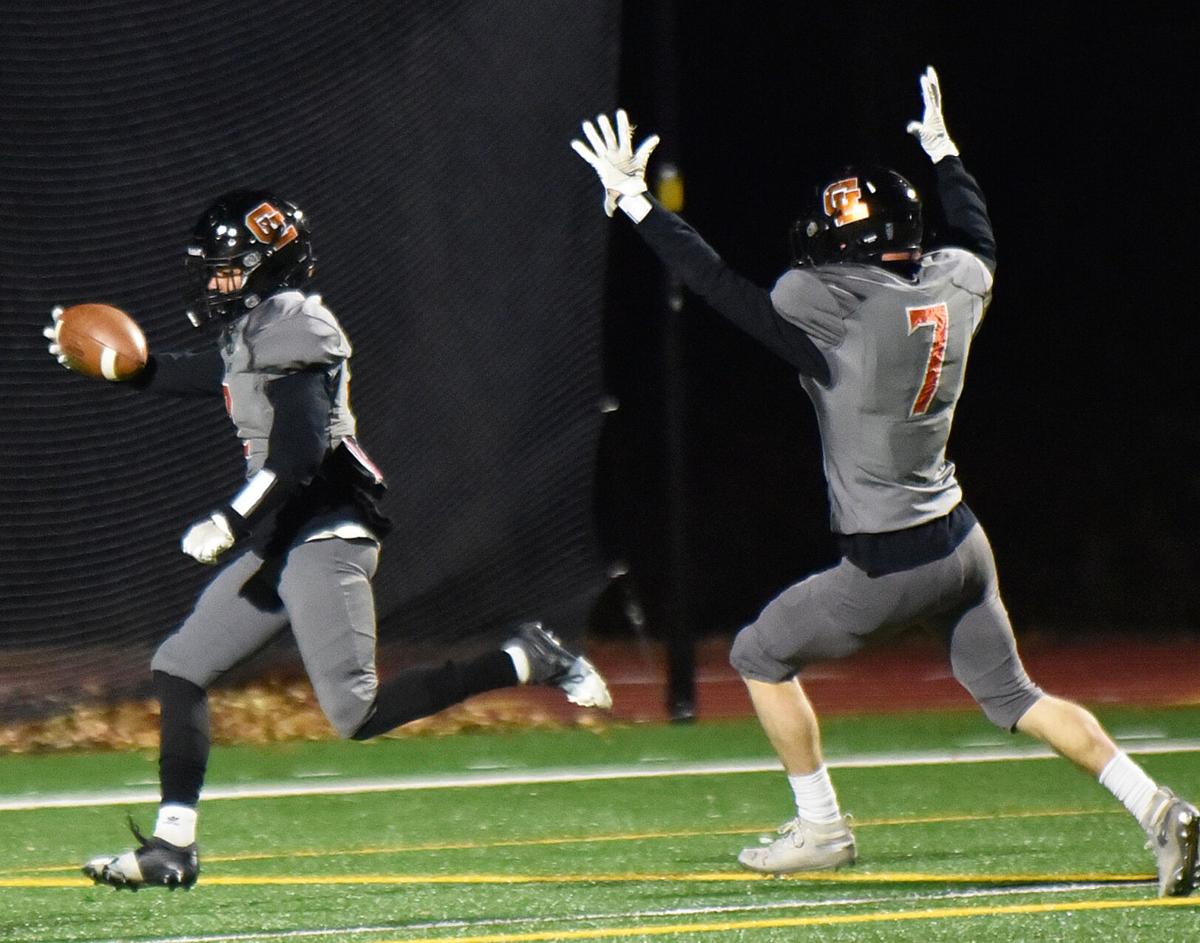 Greater Lawrence's Casey Neilon, right, begins the celebration as Javious Calderon sprints into the end zone for the touchdown against Whittier on Thanksgiving Eve. 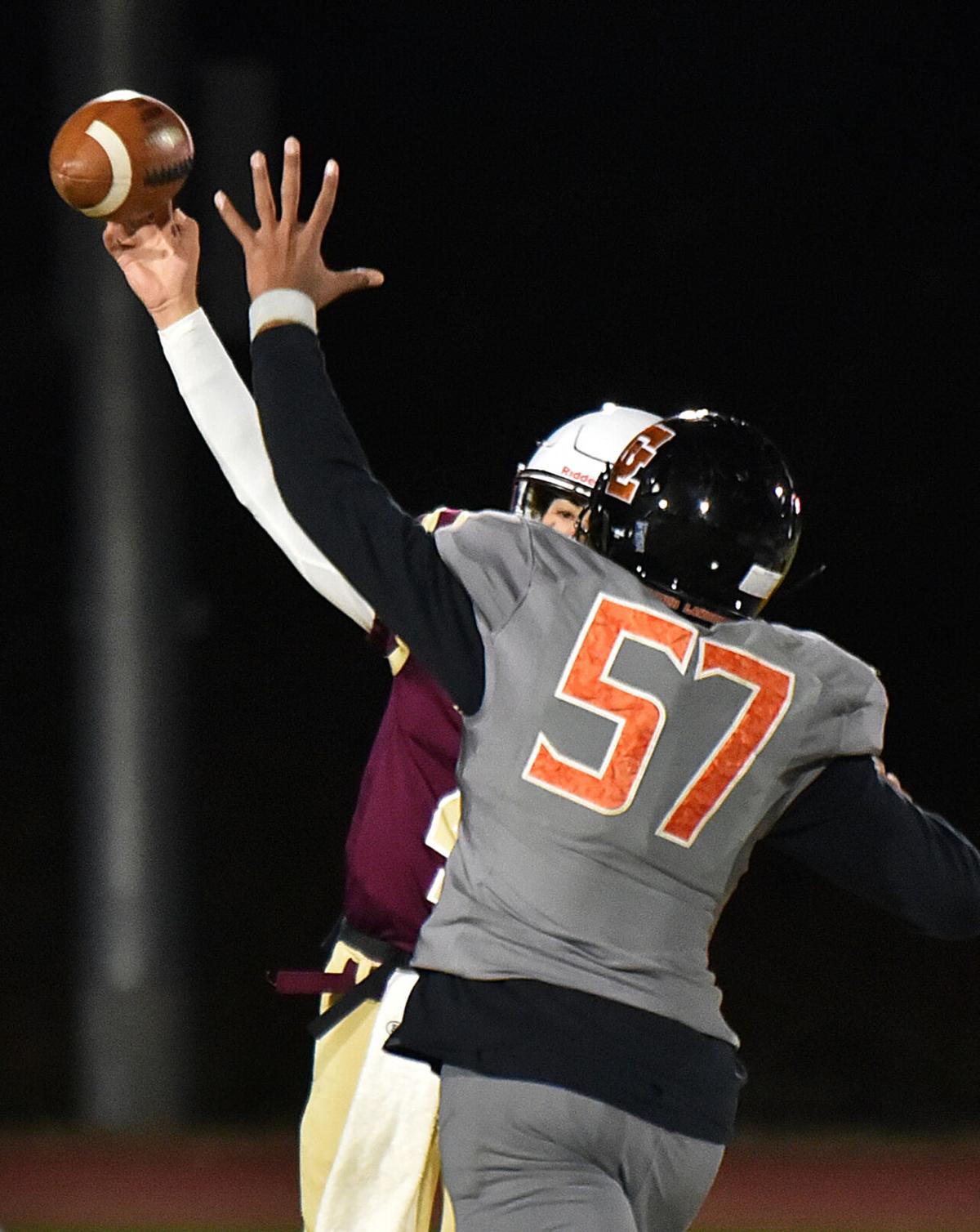 Greater Lawrence’s Adriane Morales sprints down the sideline for the Reggies’ first touchdown in an upset of Whittier in their annual Thanksgiving Eve game.

Greater Lawrence's Casey Neilon, right, is unable to catch Whittier's Niko Burke as he makes the catch in the end zone for the Wildcats' first touchdown on Thanksgiving Eve.

Greater Lawrence's Casey Neilon, right, begins the celebration as Javious Calderon sprints into the end zone for the touchdown against Whittier on Thanksgiving Eve.

HAVERHILL — A Greater Lawrence Tech football team that struggled through two forgettable months and a 1-7 mark closed out a “November to Remember” by stunning rival Whittier Tech in a holiday eve classic, 28-22 on Wednesday.

“It’s been a long year with our schedule. We’re not used to the record (4-7) the way it is. But I give these kids all the credit in the world for sticking together,” said coach Tony Sarkis, celebrating his team’s third win in a row, one in which the Reggies rallied from a 14-0 hole to score 28 unanswered before surviving one final, valiant Whittier flurry.

“Coming to practice every day, they never doubted themselves. They came back to win like this. It’s unbelievable for these kids. They never gave up on themselves.”

Senior Manny Vasquez led the winners, clicking on 12 of 19 passes for 224 yards and a TD.

“It was all about preparation and breaking down the defense with our coaches,” said Vasquez. “My receivers are good. I trust them a lot. I have a lot of confidence in them. The long throws were there all night.

“They’re our biggest rivals. This means everything to us. This was the Super Bowl for us.”

Special teams and defense also did their part.

Whittier had built the 14-0 advantage in a dominant first quarter.

Quarterback Cam West ran for one score — a 20-yard scramble — and then hit Niko Burke on a 28-yarder for the other.

But Reggie returner Adriane Morales brought the Wildcats’ euphoria to an abrupt halt with a dazzling 85-yard kick return TD, putting a dent in the margin at 14-6 on the first play of the second quarter.

“That was a killer. We tried to keep it away (from Morales), kicking to the side, but he just came right up the middle,” said Whittier coach Kevin Bradley, whose club finished the year at 5-6.

“Things were going pretty well at that time. We knew they were able to come back, that’s a good team.”

Vasquez connected with Javious Calderon for 19 and Justin Ortega for 30, setting up the second Greater Lawrence TD, a 1-yard dive by Agustin Reina to make it 14-12 Whittier.

And inside the final minute of the first half, Vasquez and Calderon clicked again, this one a 45-yard bomb that put Greater Lawrence ahead to stay, 20-14.

After the intermission, that’s where the defense kicked in.

“We just made the plays,” said Greater Lawrence senior Dominic Colon. “Everybody came together. We’ve been through a lot of adversity early in the season. Everyone just counted us out. We were the only ones who knew we had each other’s back, and we wanted to keep it going. We had to prove something to everyone tonight.”

In the second half, Greater Lawrence held Whittier to just 92 yards on 26 plays and delivered three huge interceptions, two from senior Joe Carroll and the third by Christian Sanchez, who pulled down his in the left defensive flat and raced 46 yards down the sideline for a crushing Reggies’ touchdown late in the third, making it 28-14.

As they have done all season, in a year where Bradley noted 9 of their 11 games came down to the final minutes, the Wildcats just kept fighting.

West found Noah Mercier for 23 yards and a Whittier score with 7:14 left in the game. The two-point play, a toss to Jyzaiah Ferreira, sliced the lead to 28-22.

And a Reggies’ fumble had Whittier in business at the Greater Lawrence 36. But a penalty for an illegal peel-back block took a potential game-tying TD off the board, and Carroll made a great read on a deep ball to Bryant Eno to end the threat.

Sensing victory, Greater Lawrence then devoured the 5:12 of the season, running out the clock and nailing down their eighth Thanksgiving win in 12 tries against Whittier.