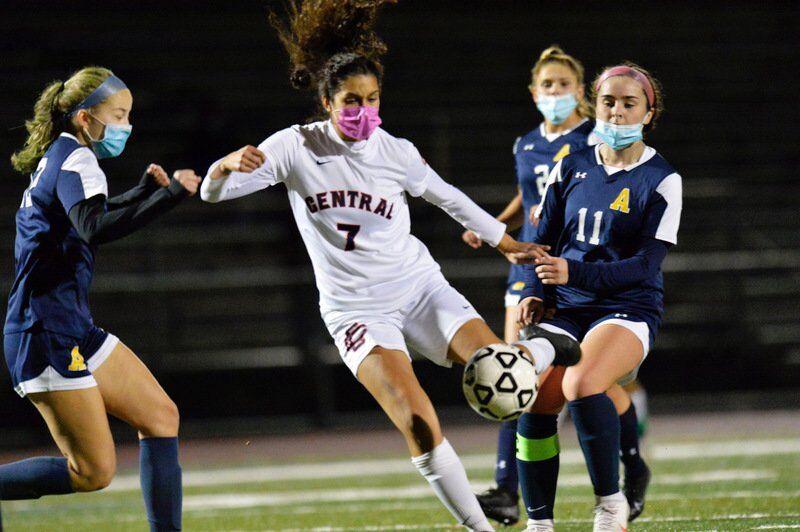 Courtesy PhotoCentral Catholic's Zarina Pinto boots a ball surrounded by three Andover players earlier this season. Pinto scored twice in the win, one of her best performances in a breakout season. 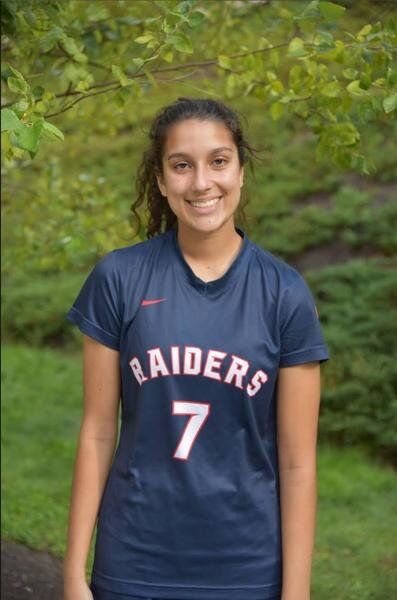 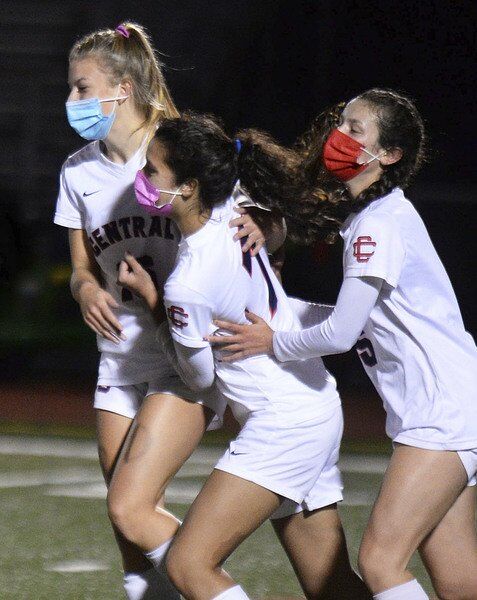 CARL RUSSO/staff photoCentral Catholic's Zarina Pinto, middle, is congratulated by teammates after scoring her second goal in a win over Andover this fall. It has been a stellar fall for Pinto. 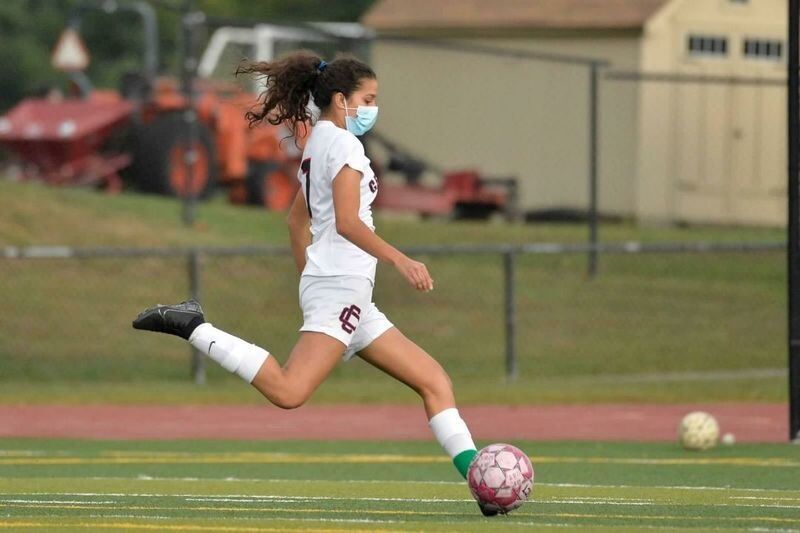 Courtesy PhotoTerrific juggling ability is one reason Zarina Pinto is always dangerous when the ball is on her foot.

Courtesy PhotoCentral Catholic's Zarina Pinto boots a ball surrounded by three Andover players earlier this season. Pinto scored twice in the win, one of her best performances in a breakout season.

CARL RUSSO/staff photoCentral Catholic's Zarina Pinto, middle, is congratulated by teammates after scoring her second goal in a win over Andover this fall. It has been a stellar fall for Pinto.

Courtesy PhotoTerrific juggling ability is one reason Zarina Pinto is always dangerous when the ball is on her foot.

Of all the aspects of budding Central Catholic girls soccer standout Zarina Pinto’s game that Raiders head coach Casey Grange raved about, one stood out as most unique — her ability to juggle a soccer ball.

“We have our players count their juggles and then report in,” said Grange of the drill, in which a player can use any part of his/her body to keep the ball from hitting the ground. “Zarina got 335 juggles in 2.5 minutes. The next closest person on the team had 201. She wouldn’t go inside until she beat her juggling record from the previous day.”

Pinto, for the record, said her personal best is actually a whopping 6,283 juggles without dropping the ball, set over the summer.

“I’ve put many hours into juggling, and I can’t say I’ve mastered it,” she said. “I started juggling when I was about 12-years-old, and couldn’t even get past 10. Every summer, I spend hours outside juggling. The more time I put in, the better my technique got. You can only get better over time. You can’t just go out one day and get 200, you need to keep practicing over and over.”

Pinto’s success on the pitch is far from limited to just that trick.

In her second season with Central Catholic, after playing for the US Soccer Development Academy as a freshman, Pinto has emerged as a dangerous goal-scorer.

The junior forward has scored six goals this fall, including a three-goal outburst in a win over St. Mary’s.

“The amount of improvement she has shown from last season to this season is extremely impressive,” said Grange. “Her fitness level is 100% better. She strength trained hard and is a lot stronger, and her touch on the ball also improved tremendously. A lot of this improvement happened during the shutdown, which speaks to dedication.”

A resident of Groveland, Pinto did not play high school soccer as a freshman. Instead, she opted to play for the club team Seacoast United, based in Hampton, N.H., which is part of the US Soccer Development Academy program.

“I have played for Seacoast United since I was 12-years-old,” she said. “Then, my freshman year they became part of the US Development Academy, so I decided to continue playing.

“Playing with the US Soccer Development Academy had many ups and downs for me. It was a very competitive league, and some days were harder than others. Even though it gave good exposure, my team was very toxic and it wasn’t a true team. We weren’t able to work together properly.”

Heading into her sophomore season, Pinto decided to make a change and go out for the Central Catholic varsity team.

“Both of my brothers went to Central, and both played soccer there,” she said. “They loved it and suggested that I try out because they thought I would enjoy it too. I was so nervous because I didn’t really know anyone, but I knew that I at least needed to give it a shot. And joining Central last year was the best decision I’ve ever made.

“I’ve been a shy person most of my life and, since I didn’t know anyone on the team, my instinct was to just not talk much. At first, it wasn’t that easy. I made it really hard for the team to get to know me because I was so closed off. Luckily, they didn’t give up on me and helped me come out of my shell.”

Pinto made an immediate impact last fall, scoring three goals and adding two assists. But she made a huge leap heading into this season.

“I feel like I’ve improved tremendously,” she said. “ I talk more on the field, which I barely did last year, and I have more control with the ball. I feel way stronger and fitter than ever before. Coach Grange makes us run a lot to stay in shape, but last year I was having a very hard time keeping up. Now I am able to play the whole game without needing a sub.”

Grange, for one, is thrilled she will have the chance to coach Pinto for one more season.

“She has become an absolute force for us,” said the coach. “I can’t wait to see her hard work continue to pay off for us and for her.”