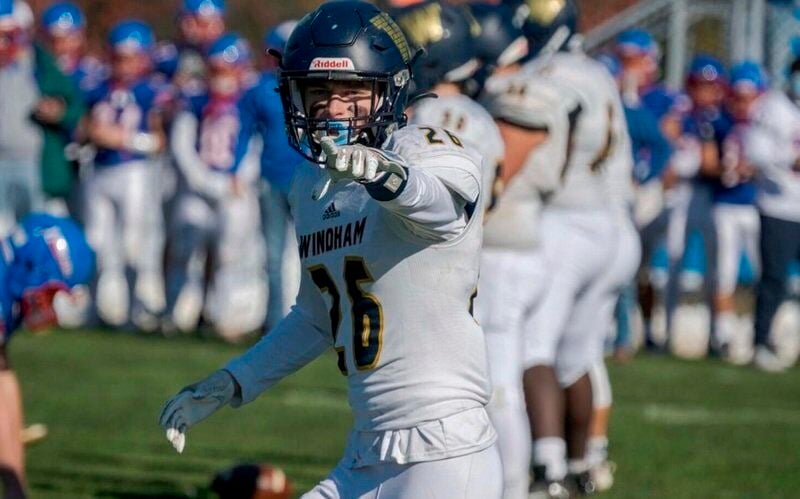 After not playing football for two years, Westin Lippold had a big year for Windham in the fall. 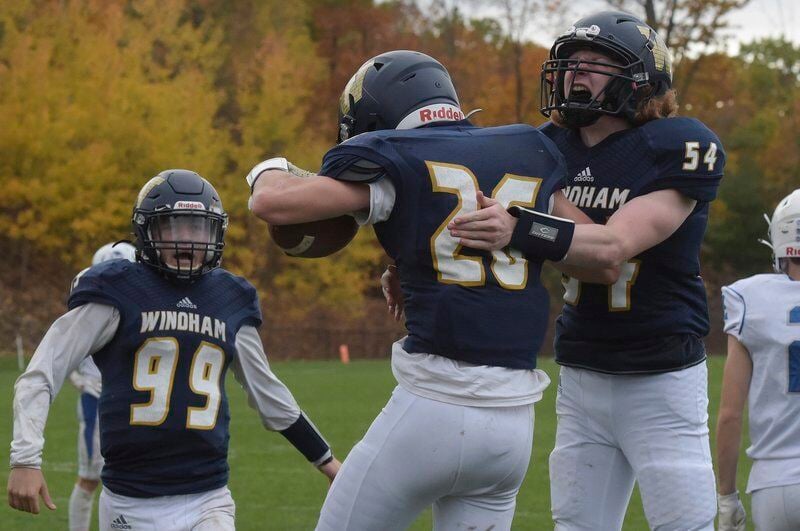 TIM JEAN/Staff photoWindham's Westin Lippold (26) celebrates scoring a touchdown against Salem with teammates Aiden Goss (54) and Joey DaSilva (99) during the fall. Lippold will play in the CHaD All-Star game on Saturday. 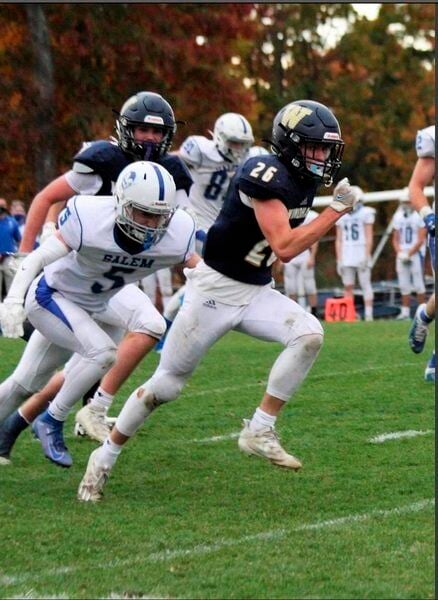 Courtesy PhotoWindham's Westin Lippold breaks down the field after a catch during his breakout game against Salem in the fall. 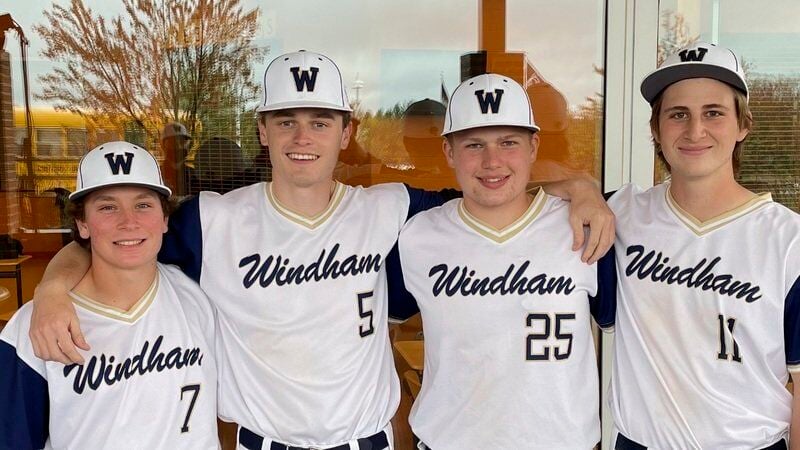 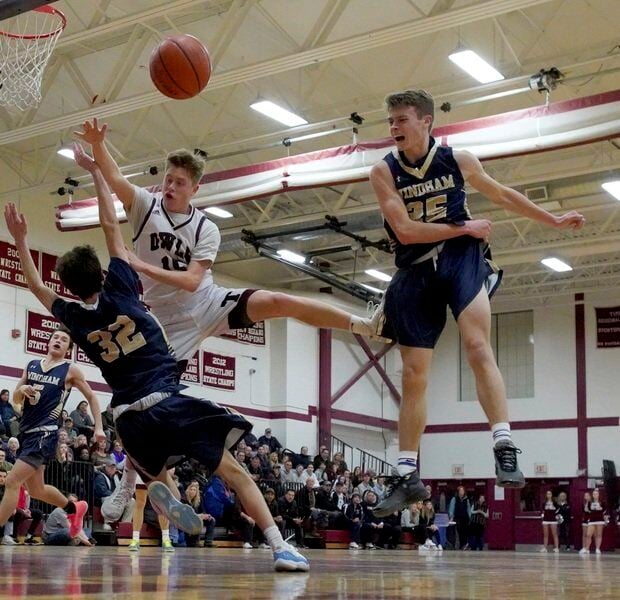 Staff File PhotoWindham's Westin Lippold (25) reacts after blocking a shot against Timberlane. Lippold was a standout in baseball, football and basketball during his senior year.

After not playing football for two years, Westin Lippold had a big year for Windham in the fall.

TIM JEAN/Staff photoWindham's Westin Lippold (26) celebrates scoring a touchdown against Salem with teammates Aiden Goss (54) and Joey DaSilva (99) during the fall. Lippold will play in the CHaD All-Star game on Saturday.

Courtesy PhotoWindham's Westin Lippold breaks down the field after a catch during his breakout game against Salem in the fall.

Staff File PhotoWindham's Westin Lippold (25) reacts after blocking a shot against Timberlane. Lippold was a standout in baseball, football and basketball during his senior year.

Westin Lippold was done playing football three years ago. He was sure of it.

Following his freshman year at Windham High, Lippold made the decision to stop playing football to focus on baseball.

“I absolutely thought my football career was over a few years ago,” said Lippold. “I didn’t think I would ever return.”

Not only did he return for one more big season but, this week, he’s now suiting up with the best of New Hampshire seniors.

Following a breakout senior campaign with Windham in the fall, Lippold will play receiver and defensive back for the East squad in the annual CHaD (Children’s Hospital at Dartmouth-Hitchcock) New Hampshire All-Star football game on Saturday (1 p.m.) at St. Anselm College.

“I’m extremely excited to play in this year’s CHaD game,” said Lippold. “It means so much to me to be able to play one last football game before my football career comes to an end, in a game with such a great purpose and with some of the best players in the state.”

Lippold caught 17 passes for 200 yards and a touchdown during his four-game, coronavirus-shorted senior season in the fall, and earned All-New Hampshire Division 1 South second team honors for his play at defensive back.

“Westin is a natural athlete and an amazing teammate,” said Windham football coach Jack Byrne. “I’m so glad he came back as a senior, because his impact was felt immediately on both sides of the ball.

“He could make plays as a wide receiver, but also took pride in his blocking and other things that made others around him better. Defensively, he was so coachable and he just understands the big picture of any sport he plays.”

A baseball standout and basketball player, Lippold had no intention of playing football during his sophomore and junior years.

“I joined the freshman football team halfway through the year and had so much fun,” he said. “But after that, I hung up the cleats to focus on baseball. I didn’t really consider playing again, at least not until summer going into senior year.”

But thanks to the work of Byrne, his coaches and some friends, Lippold began to reconsider his stance.

“First, the coaching staff does a great job of recruiting kids and definitely did a good job reeling me in. And with the new spread offense, I could see myself fitting in really well.

“Next was my friends who I grew up playing with since third grade. They kept asking me to play one last time, so that definitely had a major influence on me. Last was my oldest brother (former Windham QB) Tucker, who always told me to play.”

After impressing in summer 7-on7s, the 6-foot-2, 180-pound Lippold won a starting job as a defensive back, while emerging as Windham’s go-to receiver.

Lippold’s breakout performance came in a near upset of Salem, when he caught four passes for 73 yards and a highlight-reel 14-yard touchdown pass from basketball teammate Joey DaSilva. Lippold also caught nine passes for 80 yards against defending Division 1 champ Londonderry.

“Westin’s the kind of kid I’d want as a partner in any backyard barbecue game,” said Byrne. “He just figures things out and finds a way to win. Most importantly, the way he wins makes you want to root for him because he enjoys competition and treats everyone the right way.”

Lippold is now pumped to take the field one final time in the CHaD game.

“I’m excited to represent Windham,” he said. “It’s meaningful to play for such a great cause, especially with how blessed I have been in my life. It really means a lot to be doing everything we can to help these kids, many of them who are struggling.”

Three-sport standout Westin Lippold was named Windham’s male Athlete of the Year for the 2020-21 school year.

In football, he caught 17 passes for 200 yards and a touchdown, and excelled as a defensive back. He was also a quad-captain and key contributor in basketball.

“It meant so much to me to be a three-sport athlete,” said Lippold, who will attend Quinnipiac and doesn’t plan to play sports.

“ I like to be well-rounded, and I really just love any opportunity I can to play sports. The biggest challenge is keeping track of everything, because in the summer I’d have a baseball doubleheader, then a basketball open gym and then a football workout.”