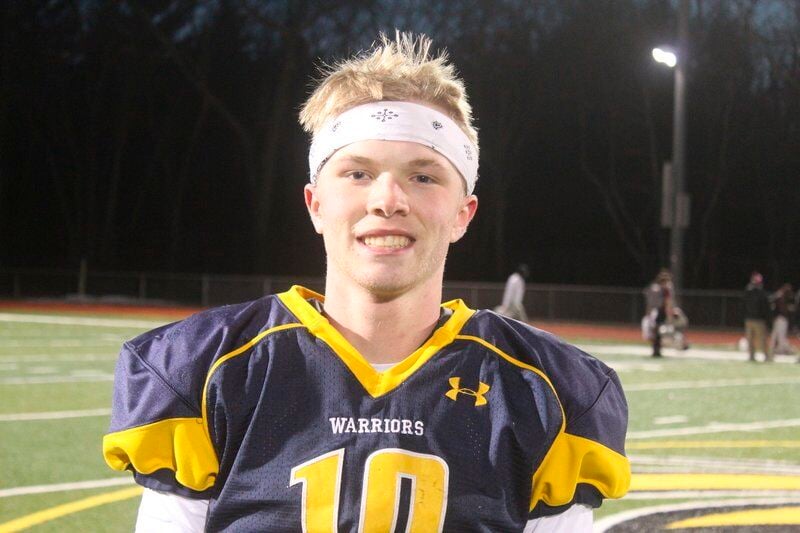 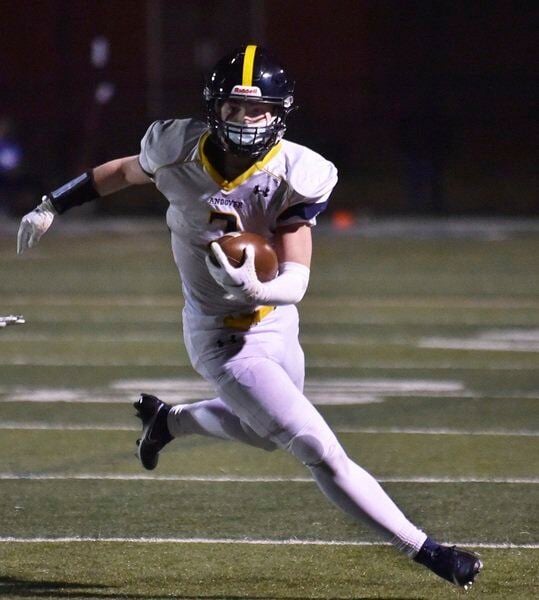 CARL RUSSO/staff photoAndover's Lincoln Beal, here in the Golden Warriors' season-opener, ran for 83 yards and a touchdown in Friday's victory over Lowell.

CARL RUSSO/staff photoAndover's Lincoln Beal, here in the Golden Warriors' season-opener, ran for 83 yards and a touchdown in Friday's victory over Lowell.

ANDOVER — If a tone needed to be set Friday night, Andover star AJ Heidtke was more than happy to deliver it.

Matched up against a much smaller Lowell player late in the first quarter, the hulking 6-foot-4, 290-pound Eagle-Tribune All-Star lineman drove the opponent roughly 25 yards before sending him flying into the sideline.

Having waited nearly 16 months to celebrate a victory, and a week removed from a frustrating season-opening loss, Andover meant business.

“It’s been (477) days since our last win (Thanksgiving of 2019), and even longer since it was under the lights,” said Heidtke. “We wanted this so much. The feeling is indescribable.”

“It’s been a long wait!” said Brown. “We had to bounce back from last week (20-14 overtime loss to Methuen). We knew we needed this win, and I think we showed a lot of people that Andover is back in it with this performance.”

Andover’s defense surrendered just 58 yards in the first half, never allowing Lowell to pass the 50-yard line. The Golden Warriors held a dominant 24-0 halftime advantage. Lowell didn’t break up the shutout until there was 4:44 left in the third.

“This win has been a long time coming,” said linebacker Tomas Loureiro, who finished with a team-high 12 tackles. “We were frustrated, and we wanted to come out and punch them in the mouth today. We had to control the line of scrimmage and be more physical than them. It’s fun to go out, be physical, and show who is the tougher team.”

The 5-foot-8, 150-pound Brown carried 26 times for 115 yards and three scores. Beal rushed 18 times for 83 yards and a touchdown and caught two passes for 71 yards, both setting up scores.

“Scotty ran unbelievable,” said Andover coach E.J. Perry. “He was making the cuts he needs to make. We tightened up a few things on offense and gave him better running lanes. And Lincoln is also playing unbelievable running and receiving.”

It was Beal who gave Andover the lead. Following an interception by Anthony Previte — an Eagle-Tribune soccer All-Star who went out for football when it was moved to Fall 2 — Beal drove his way in for a 1-yard touchdown.

Andover then forced a fumble that was recovered by Loureiro, and five plays later Brown took a keeper around the left corner and scored a 6-yard touchdown.

Lowell again fumbled the ball away on the next possession, recovered by Connor Sheehan, and Brown scored again five plays later, this time on 5-yard a draw up the middle.

Beal caused and recovered a fumble two possessions later, and an Andrew Wetterwald field goal on the final play made it 24-0 at halftime.

Pike previously ran the offense, which has rarely been seen in the MVC over the past 15 years, as head coach at Salem (N.H,) High.

That was never more obvious than on the first possession of the second half, when Parker Rankin and Sheehan came barreling through the line and sacked the Lowell QB in the end zone for a safety.

Lowell scored two late touchdowns, but Brown erased any thought of a comeback when he maneuvered his way in for a 1-yard touchdown with 2:55 to go in the game.

“I love when my line is physical, and I love the feeling of scoring touchdowns,” said Brown. “Our main focus was to get the offense back on track, and we executed very well today. I love when they rely on me to carry the ball, and we’re so excited to get the win.”

For video highlights from Andover football’s victory over Lowell, visit us online.