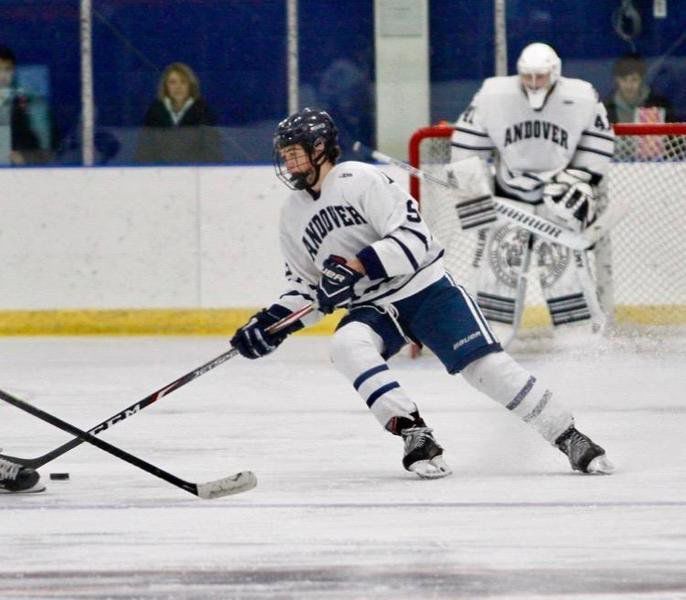 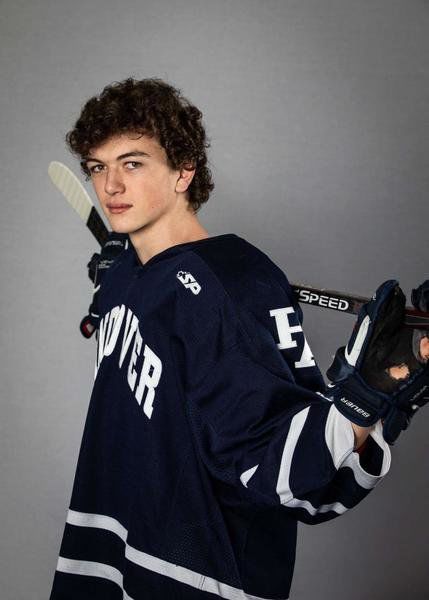 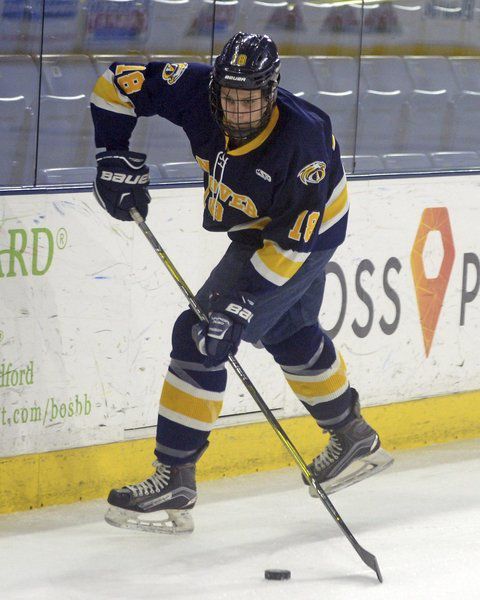 Staff File PhotoShane Lachance looks to make a play with the puck while playing for Andover High. Lachance now plays for Tabor Academy, and was drafted by Tri-City in the USHL Draft.

Staff File PhotoShane Lachance looks to make a play with the puck while playing for Andover High. Lachance now plays for Tabor Academy, and was drafted by Tri-City in the USHL Draft.

On May 4, Phillips Academy Eagle-Tribune All-Star forward William Hughes of Andover was selected by Sioux City in the seventh round of the USHL Phase 1 “Futures” Draft, limited to athletes born in 2004.

A day later, former Andover High star and current Tabor Academy standout Shane Lachance was picked by Tri-City in the ninth round of the USHL Phase 2 Draft.

“I’m thrilled to be drafted into the USHL,” said Lachance of the USA’s premier junior hockey league. “Looking at NHL and Division 1 college rosters, it’s unbelievable how many players have come through this league. Having an opportunity to follow the paths that some of the best players in the world have taken is definitely an honor for me.”

Added Hughes — who like Lachance is a 16-year-old forward — “I am super excited to be drafted into the USHL. It is a great opportunity and I feel honored to be selected.”

Lachance had to wait the extra day to be picked in the USHL Draft, because he was born in August of 2003.

The Tri-City (Nebraska) Storm then made him the 128th overall pick in the Phase 2 Draft.

“A couple USHL teams had called me to tell me they were interested,” he said. “I had a feeling I may get picked, but I wasn’t sure when. My family and I were watching the draft online. I saw my name pop up on the screen and it was a very exciting moment. Shortly after the selection, I got a phone call from (Storm) coach (Anthony) Noreen. This was an extremely exhilarating feeling.”

Lachance is coming off an impressive debut winter for Tabor, scoring 13 goals and adding nine assists as a repeat sophomore.

Prior to that, Lachance starred for two seasons at Andover High, earning All-MVC honors in 2018-19 (six goals, 15 assists). As a freshman, he helped the Golden Warriors earn their first Super 8 berth.

“I learned a tremendous amount from my two years at Andover High,” said Lachance, whose father is longtime NHL defenseman Scott Lachance. “I was lucky enough to create many special bonds with friends. After my sophomore year, I felt it was time for a change. I needed a bigger challenge. Transferring to Tabor was the best decision I could have made.”

Lachance doesn’t yet know when he may take on his next challenge in the USHL.

“The USHL is definitely a league that I could see myself playing in,” he said. “I feel as though, with my style of play, I’m a good fit for the league. Being the country’s premier junior league, the USHL presents a great opportunity in terms of acceleration of my game and exposure in order to get to the next level, which is something that I am super excited about.”

Phillips Academy star Hughes knew he was on the USHL’s radar, but wasn’t sure quite what to expect heading into the Draft.

“During the season (for Phillips) there were lots of USHL scouts that would come to my games, and leading up to the draft I received a lot of phone calls from different teams,” he said. “Before the draft, I had a pretty good idea I was going to be selected, but nothing was guaranteed.”

The Sioux City (Iowa) Musketeers made Hughes the No. 92 overall in the Phase 1 draft.

“I found out I was drafted while watching the draft on my computer,” he said. “I also received a phone call from the general manager, Andy Johnson, as well as the head coach (Luke Strand.)”

Hughes is coming off a sophomore season where he scored 10 goals and added 13 assists for the Big Blue, and was named an Eagle-Tribune All-Star.

“Phillips has one of the most difficult hockey schedules in prep hockey,” he said. “The energy and excitement on and off the ice for the Exeter game was crazy. I’m very proud of the season we had. I’m focused on Phillips for now, but having the chance to play in the USHL is very exciting and a great opportunity.”

Family inspired the love of hockey in Andover’s William Hughes and Shane Lachance.

“Having someone, like my father, so close to you who has been through every level of hockey is something that I am grateful for,” said Shane, whose grandfather is 40-year Boston University hockey coach Jack Parker.

“Being able to learn from my dad is a huge advantage. And Jake, like my father, is someone I look to in life. When I was younger, I used to follow Jake around and I wanted to do everything that he did. That hasn’t changed much to this day.”

“Before my brother, no one in my family played hockey,” said William. “I would go to all of Michael’s games, and as I was sitting in the stands with my parents, I remember saying I wanted to play hockey.”