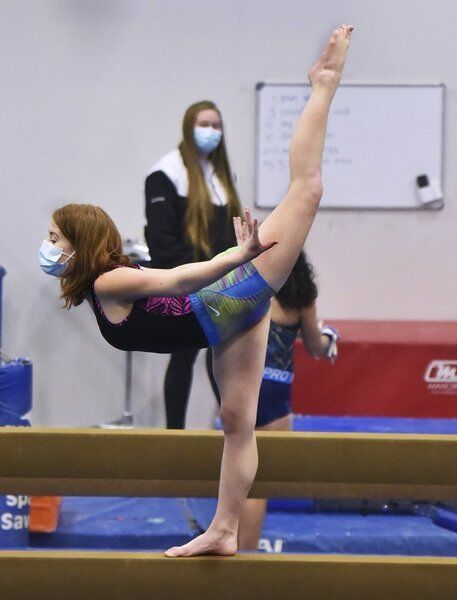 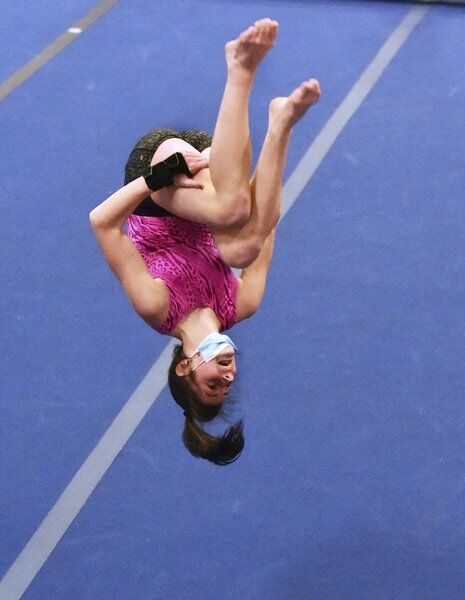 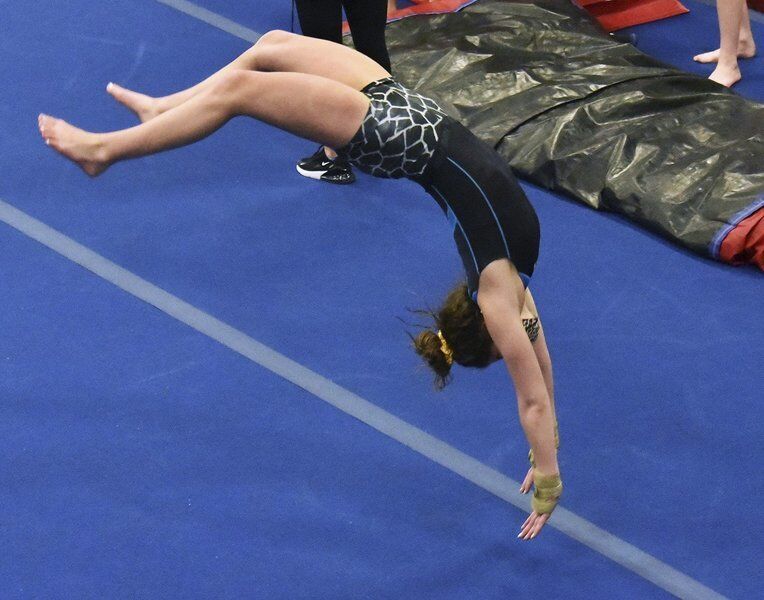 CARL RUSSO/staff photoHaverhill junior Cailey Simard, one of the team's top returning performers, performs a backward flip on the floor. 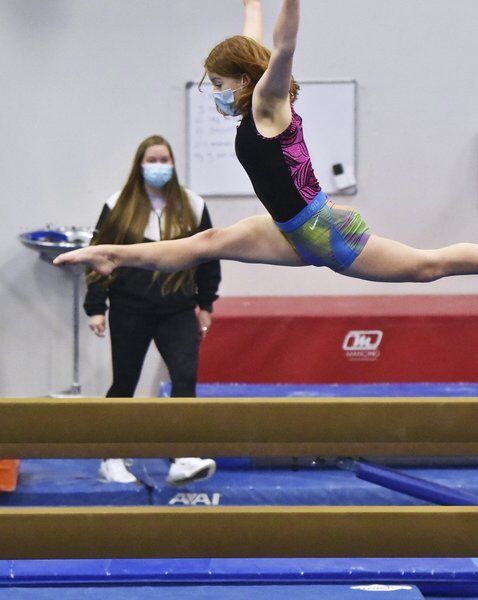 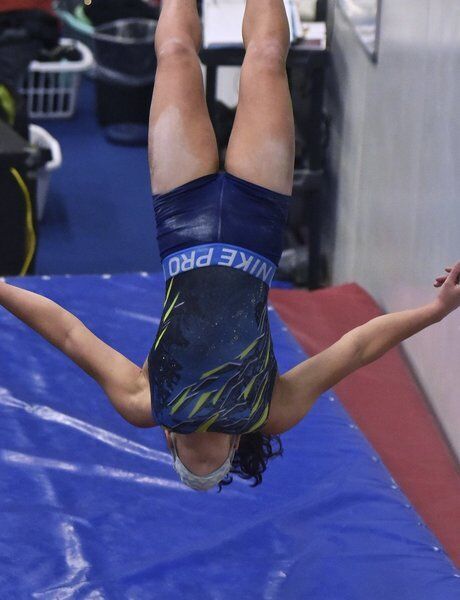 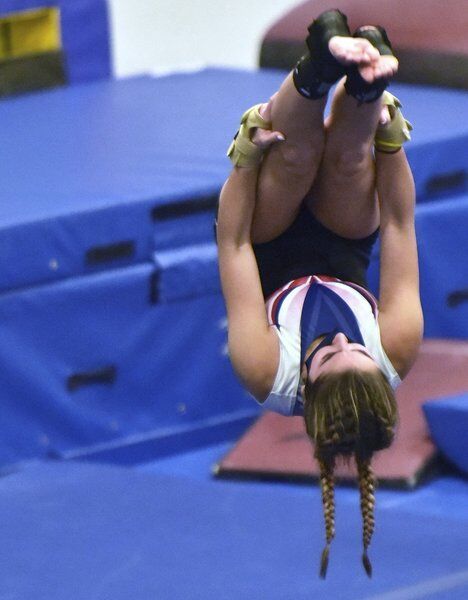 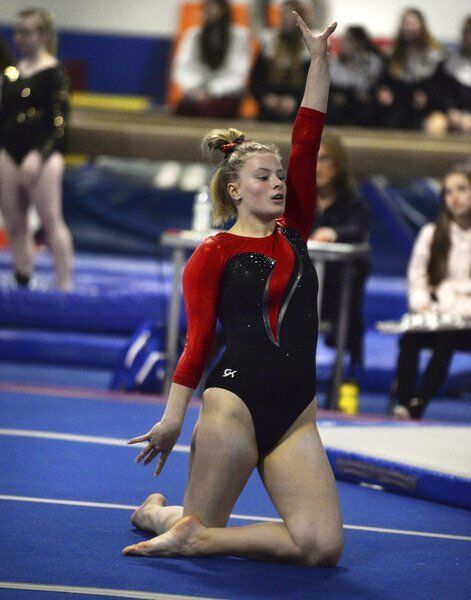 CARL RUSSO/Staff photoNorth Andover's Kasey Burke, striking a pose during her floor routine, was the MVC all-around champion last year as a sophomore. 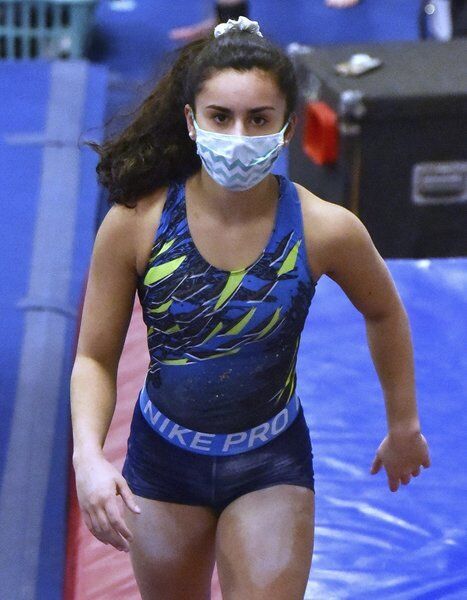 CARL RUSSO/staff photoHaverhill junior Cailey Simard, one of the team's top returning performers, performs a backward flip on the floor.

CARL RUSSO/Staff photoNorth Andover's Kasey Burke, striking a pose during her floor routine, was the MVC all-around champion last year as a sophomore.

It’s not easy finding good news in these weary days of the coronavirus, but I may have found some.

Participation in girls high school gymnastics has, for the most part, risen and there are generally far fewer restrictions than in other sports.

Yes, athletes must keep their social distance and wear masks when competing (unless they’re isolated at least 14 feet), and there will be no spectators, but dual meets will go on as usual.

“We’re lucky,” said Andover assistant Rachel Tomacchio. “Gymnastics is a sport where you can easily abide by the six-foot distancing rules and compete as you always did.”

Agrees Haverhill coach Melanie Tarbox: “Safety-wise, gymnastics can be done safely given the protocols and safety measures in place.  The MIAA and MVC have done a great job providing us with guidelines to follow to keep everyone safe.”

That also seems to be true in New Hampshire.

“We don’t believe that COVID restrictions will drastically the gymnasts’ performance,” said new Pinkerton coach Stephen Needham. “The gymnastics community as a whole believes a competitive 2021 season can be carried out safely.”

Tomacchio says that the girls have adapted well to the safety measures in Mass., something that Tarbox stressed from the beginning.

“On the first day of the season, I told the girls we were really going to spend the first week hammering the new rules into our heads,” said Tarbox.

“The goal is for the COVID rules to become second nature so that they are strictly followed while not being the focus of each practice.  This will enable the girls to have some normalcy in their lives, and some fun.”

That seems to be the case so far for what has been surprising turnouts. Haverhill, for example, had a record 24 show up for practice, Andover has a healthy 22, Salem lists 21 and there are 19 at North Andover — all larger squads than usual.

Perhaps in explanation, Salem coach Lilly Oliveri said: “A lot of these girls have missed out on so much from COVID-19 whether it be sports or just social interaction.”

Some of the protocols won’t make practice and competition smooth, the lack of JV competition is disappointing, and required sanitizing will make meets longer, but most agree that it’ll be worth it.

“The girls have accepted this challenge like champs and adapted so quickly,” said Tomacchio.

And so, it seems, have all local gymnastics teams — and that’s good news.

Abundance of talent on local scene

There appears to be plenty of talent among local teams with several freshmen expected to make big impacts.

CENTRAL CATHOLIC — The Raiders were 6-2 last year and are expecting another good season. Deirdre Donovan and Haley Stewart are strong returnees and Valerie Perrier and Riley Salerno are promising freshmen.

METHUEN — The Rangers will be hard pressed to replace Eagle-Tribune All-Star Adiamis Ramos from last year’s 6-2 squad. They remain optimistic thanks to experienced seniors led by Molly Beeley and Andrew Monayer. Other gymnasts to watch are seniors Emily Loan, Grace Pappalardo, Emily Angelari and Cassidy Hersey along with juniors Anna Rose Bolduc and Caleb Canavan.

PINKERTON — The Astros, who were 37-0 last year and have won four straight state titles and six of the last seven, could bring home another title.

SALEM — Coach Lilly Oliveri believes this could be the best Blue Devil team in many years.

All-arounder Jenny Gouthro is healthy after being injured last year. Elizabeth Buttersworth returns after qualifying for regionals in the beam a year ago and Lisa Chevaire is a standout freshman who may be the top scorer on the team.

Also back are top juniors Alison Hardy and Alexa Chausse. Incoming freshman Gabrielle Minuti, a former Level 8 gymnast coming back from back trouble, could make an impact.

TIMBERLANE — The Owls hope to build on last year, when youngsters like Rebecca Silva and Emily Ahearn stood out.

WINDHAM — The Jaguars have a young team but a budding talent in sophomore Sierra Draeger.