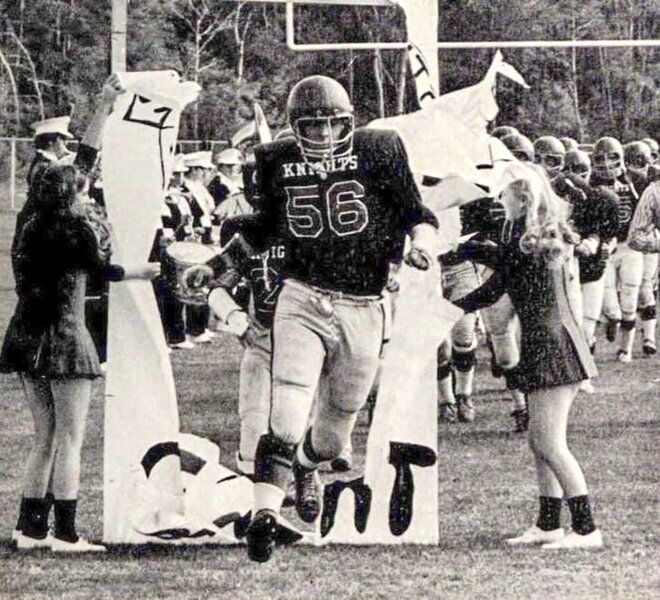 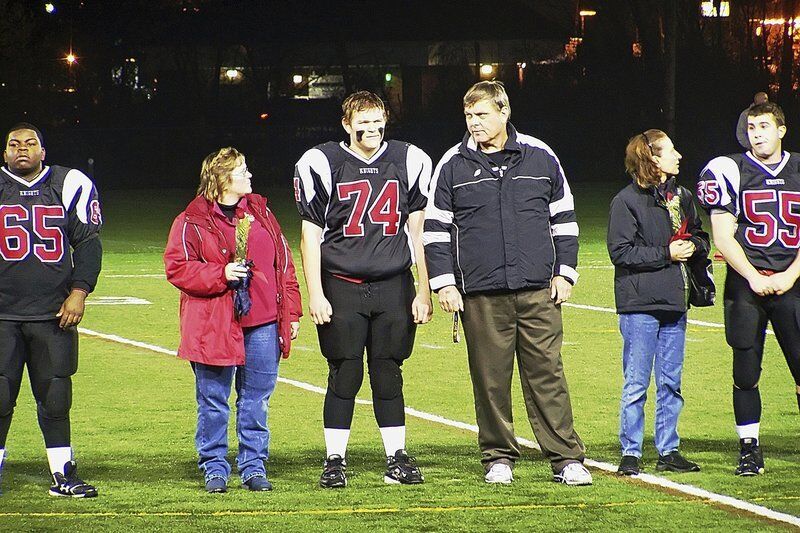 “He showed up and he made it special,” recalled Harb, a hockey and football star who graduated in 1988. “We had a great conversation.”

Miller was a North Andover townie who adored the town, the high school and football. He died unexpectedly on Christmas Day at age 66.

Another Hall of Famer, quarterback Sean Connolly (NA ‘88), said, “First of all, he was just a good guy, never mind a good coach. He really cared about all his players. He’d always ask about all the teammates. It was a testament to how much he cared.”

He was never head coach for the Scarlet Knights but the longtime Lawrence school teacher, mostly at the Bruce School, played a pivotal role on many of coach Mike Cavanaugh’s championship teams.

There was an outpouring of love on Facebook and Twitter for Miller, who was a North Andover football captain in 1971.

Joe Quartarone wrote, “He molded hundreds of lives by his dedication to North Andover football. Thank you for being my coach and pushing me and all of us to succeed on and off the field.”

Sean Morgan wrote, “Great coach and man. Nobody could get you more fired up to play.”

The Tribune did a story a few years back on bruising lineman Ben Velishka, who went on to start for Boston College under coach Tom Coughlin. He raved about all his North Andover coaches and said “but most of all Bing Miller.”

Harb recalled, “The Tribune’s Bill Burt wrote beforehand we had no business being on the field with them. Bing said, ‘Nobody in the Merrimack Valley gives you a shot in hell, but I believe in you.’”

The undersized Knights, then of the much smaller Cape Ann League, stunned Merrimack Valley power Andover.

Connolly was the hero but he says not so fast.

“The line made that game and Bing coached them,” said Connolly. “They were undersized but they kicked the (bleep) out of Andover. Bing was a huge part of what we accomplished.”

Miller, who seemingly nobody ever called by his given name of Philip, coached the Scarlet and Black for years. He later coached at Bentley University and did a stint as head coach at Sharon High, commuting all the way from the Merrimack Valley.

One of his sons, Mike Miller, coached alongside him at North Andover and was a big star for the Knights (NAHS ‘09) and Plymouth State.

A GoFundMe account to benefit Bing Miller’s family has raised $30,600. Contributions are still being welcomed at: gofund.me/8648a33e.