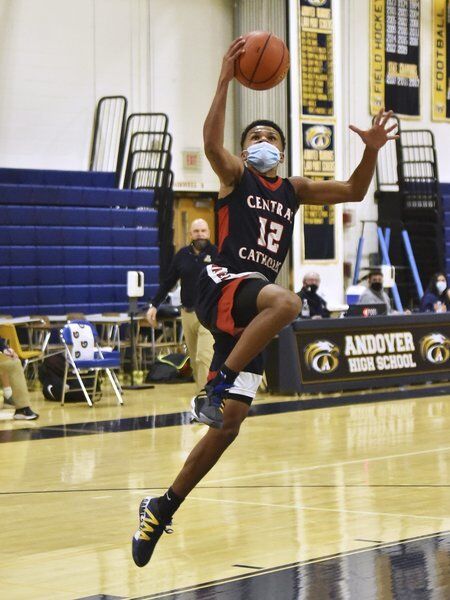 CARL RUSSO/staff file photoCentral Catholic's Xavier McKenzie, here earlier in the season against Andover, hit the game-winning shot for the Raiders in the MVC Cup title game on Thursday. 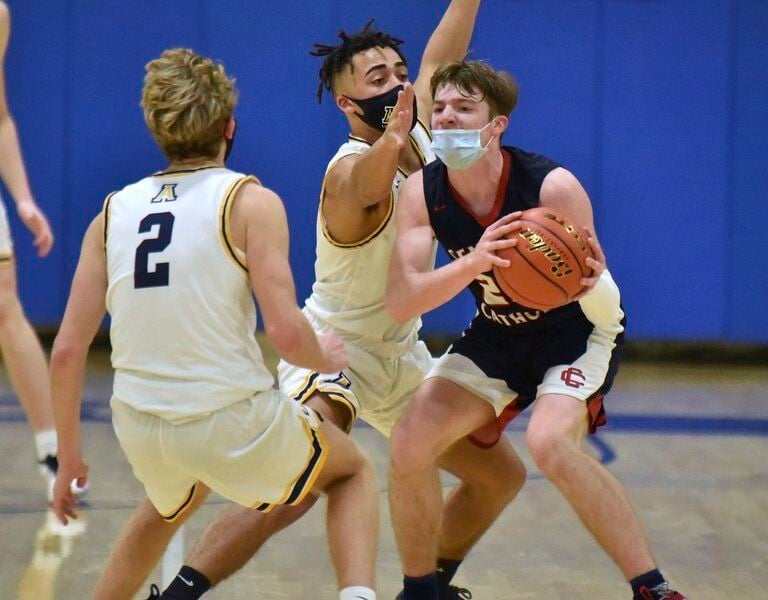 CARL RUSSO/staff file photoCentral Catholic's Xavier McKenzie, here earlier in the season against Andover, hit the game-winning shot for the Raiders in the MVC Cup title game on Thursday.

TEWKSBURY — It was a strange ending — a “championship” game at 1 p.m. on a Thursday in Tewksbury — to a strange season of masks, social distancing, free throw formations, no jump balls, disjointed practices and, of course, no fans.

But one thing that wasn’t strange was the two teams playing for all of the marbles in the boys basketball “championship” called the MVC Cup — Central Catholic and Andover High.

In the end, even that ended up a little strange, with Central nipping Andover, 39-37, in what was one of the lowest scoring games in the recent history of this great boys basketball rivalry.

“It feels so good to win this game,” said Central junior Xavier McKenzie, who broke the 36-36 tie with a clutch pull-up jumper from the foul line with 59 seconds left in the game.

“After we lost the first two games of the season to Andover, this was the date we wanted, against Andover for the championship,” said McKenzie. “I couldn’t wait for one more chance against them. The fact they were a great team and remained undefeated (until this game) was even better.”

Andover, which ends 11-1, had several chances to put some distance between it and Central in the second half, leading from the four-minute mark of the third quarter until the final minute of the game.

At one point Andover led 36-31 early in the fourth quarter.

But Dave Fazio’s team could only muster three points the rest of the game.

“Our defense was great; couldn’t be better,” said Fazio, afterward. “Offensively we were never there. The combination of their matchup zone bothering us a bit, and then missing so many early looks. Then in the fourth quarter, we couldn’t generate anything, missing layups.”

One possible factor to Andover’s offensive woes was the fact that it had won its last nine games by an average of 23.5 points.

“They are a great team. Aidan (Cammann) is a special player,” said McKenzie. “We talked about him a lot in practice. A lot.”

The 6-foot-9 Andover junior had bodies, arms and a collapsed zone defense hindering his progress. It worked as the Division 1 recruit scored only nine points.

“We wanted to be physical, keep him in front, and make it difficult,” said Central coach Mark Dunham. “He’s a tough matchup for every team. We didn’t want him to go off. That’s a credit to our guys.”

Andover had other self-inflicted issues. It made only 2 for 8 from the free throw line.

For Central, there weren’t a lot of offensive highlights outside of McKenzie’s 14 points, but sophomore Marcus Rivera had a big 3-pointer two minutes into the fourth quarter when Andover led 36-31. But, according to his coach, his grabbing the offensive rebound after a missed Central free throw with two seconds left in the game was pivotal.

“That was the play of the game,” said Dunham of the rebound. “As we saw today, Marcus is not afraid of the moment.”

Andover finishes as the undefeated regular season champ at 10-0, but Central leaves with the MVC Cup.

“It was tough losing, but it really was an amazing year,” said Fazio. “Because of the pandemic, leadership was more important and ever. My seniors Luke Poirier, Jack Cloutier, Ryan Greco, Zayn Aruri and Jared Moses. We couldn’t have done what we did without them.”

Central’s McKenzie, the game MVP, was equally indebted to the soon-to-be Central grads.

“We have some great seniors who brought it to the gym every day,” said McKenzie of Godin, Jermaine Wiggins and Victor Metivier. “They deserved to go out with a championship. And they did.”