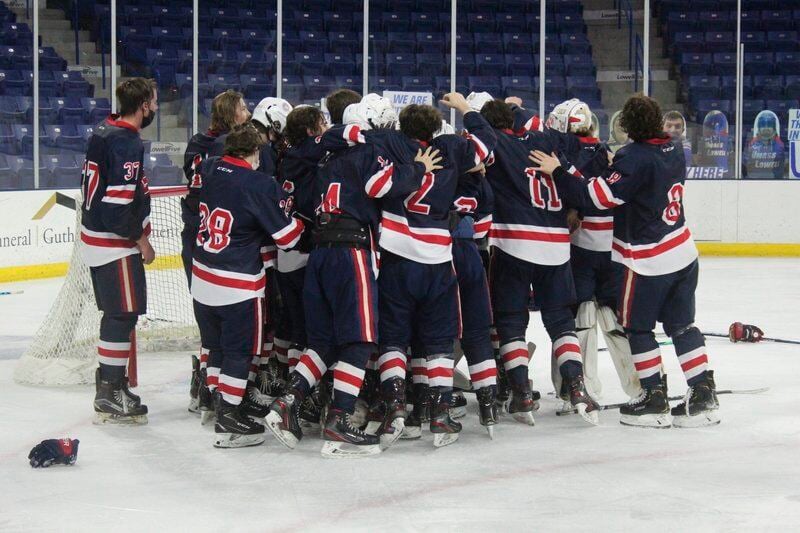 DAVID WILLIS/Staff PhotoThe Central Catholic boys hockey celebrates after beating Tewksbury 5-2 in the MVC Cup Division 1 championship game on Sunday. The win avenged the Raiders' only loss of the season. 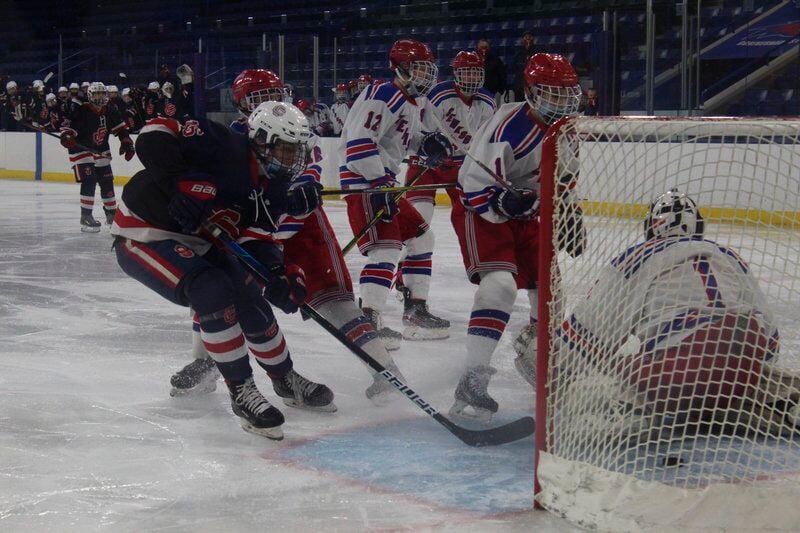 DAVID WILLIS/Staff PhotoCentral Catholic's Michael Dinges slides the puck past the goalie and into the net for the Raiders' third goal in their win over Tewksbury in the MVC Cup Division 1 final. 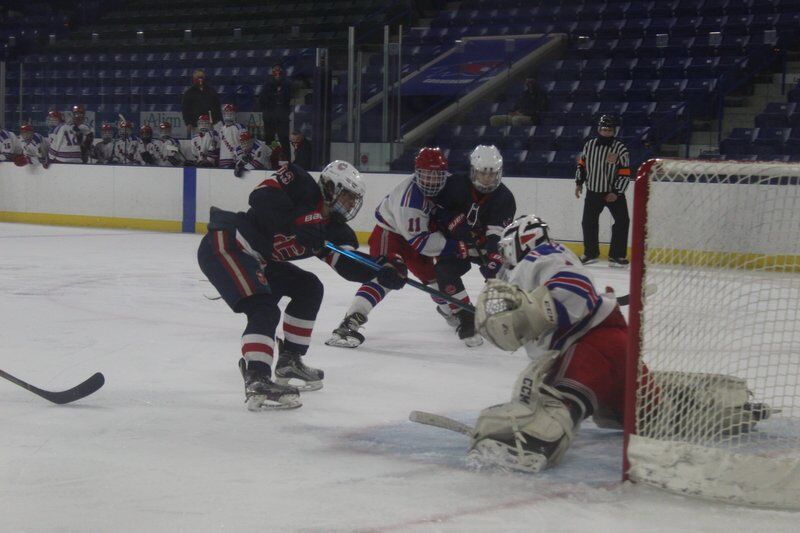 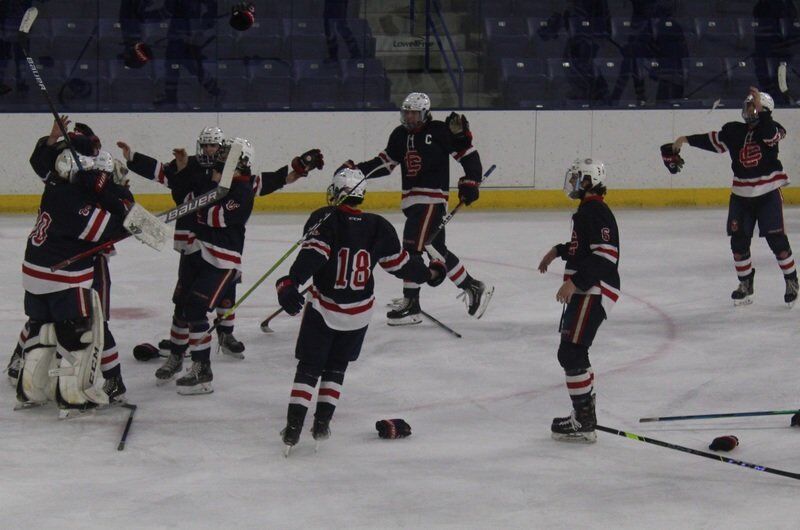 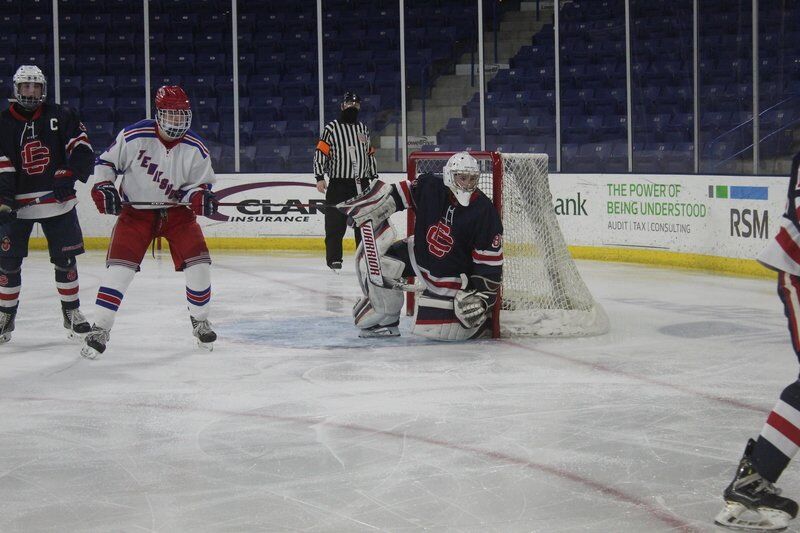 DAVID WILLIS/Staff PhotoCentral Catholic's Michael Brothers watches the puck after making a save against Tewksbury on Sunday. 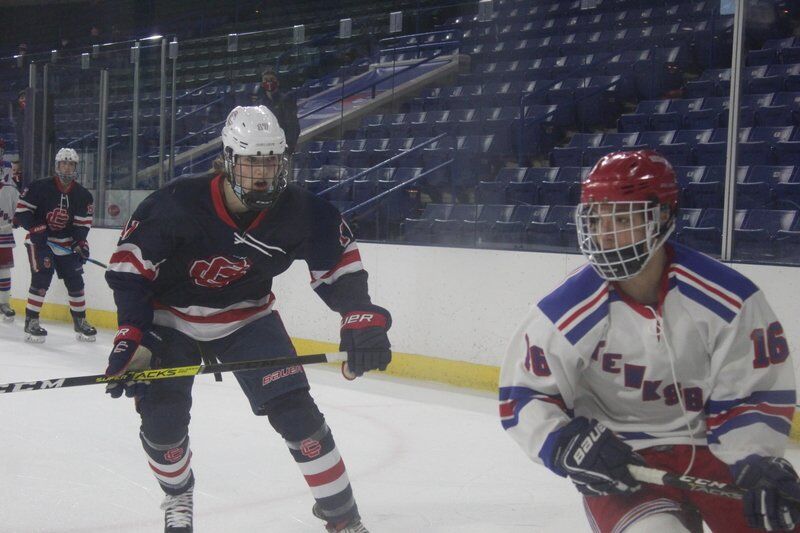 DAVID WILLIS/Staff PhotoThe Central Catholic boys hockey celebrates after beating Tewksbury 5-2 in the MVC Cup Division 1 championship game on Sunday. The win avenged the Raiders' only loss of the season.

DAVID WILLIS/Staff PhotoCentral Catholic's Michael Dinges slides the puck past the goalie and into the net for the Raiders' third goal in their win over Tewksbury in the MVC Cup Division 1 final.

DAVID WILLIS/Staff PhotoCentral Catholic's Michael Brothers watches the puck after making a save against Tewksbury on Sunday.

LOWELL — Hulking Central Catholic defenseman Nick Peters was still wiping tears from his eyes, overcome with emotion moments after closing out his high school hockey career as a champion on Sunday.

“This feels amazing to be MVC Cup champs,” said Peters. “I was really starting to feel the emotions there at the end. It’s tough. I never thought it would end like this, with no fans and no states, but I’m so glad we had this chance. It feels so great. This means so much to all of us.”

No. 2 seed Central Catholic raced out to a five-goal lead, and rolled to a convincing 5-2 victory over top-seeded Tewksbury in the Merrimack Valley Conference Cup Division 1 boys hockey championship Sunday afternoon at the Tsongas Center.

“After everything we’ve been through this season, with COVID and everything, it’s such a great feeling to end it like this,” said goalie Michael Brothers. “We played hard all season, we had a lot of confidence and we gave it all we had. It’s been a blast playing with these seniors, and to send them out like this is so great.”

The win was the second straight for Central Catholic (8-1-1) over Tewksbury (8-2-0) this winter, after the Redmen dealt the Raiders their only loss of the season on Jan. 27.

The victory was also a major milestone in the Raiders’ turnaround from two years ago, when they finished just 4-12-5.

“This is like nothing I’ve ever felt,” said tri-captain AJ Grenier, who scored a goal and added two assists. “To be a part of this varsity team for three years, going through that rough first season (in 2018-19), then starting to come back last year (10-9-3), and to take home the title this year is really incredible. It makes it feel better to start in that place, winning just a few games, and now taking home the MVC Cup.”

With 7:22 left in the first period, Grenier fired a pass to Sean Gray, who scored his 10th goal of the season to give the Raiders a 1-0 lead.

Just 1:28 later — after another Raiders’ goal was disallowed — Peters broke in and tossed a shot on net from the left faceoff circle that eluded the goalie and made it 2-0.

“I was going to dump the puck in, but I saw some space down wide,” said Peters of his second goal of the season. “So I took it and got a shot on net. I thought the goalie was going to make a glove save, but it was a good shot and it went in.”

Central added to the lead 2:33 into the second, when tri-captain Michael Dinges made it 3-0 with a shorthanded goal, his fifth tally of the season, the second of the day assisted by fellow tri-captain Tyler DiBurro.

“It takes a big weight off your shoulders when you go up big like that,” said Brothers, who had to make just 18 saves for the game. “Especially when the boys were rolling and I only faced about five shots in the first period. They were playing great, and as a goalie it feels nice.”

Central continued to roll in the third. Mike Collett tallied his fourth goal of the season only 1:33 into the period, giving the Raiders a four-goal advantage. Then, 48 seconds later, Grenier made it 5-0 with his second goal of the season. Tewksbury scored twice late.

“We wanted to play simple today,” said Grenier. “We wanted to get pucks deep, get shots and play physical. We had a little lull, but we came back and got the job done. It was a dream come true today.”

And despite no fans being allowed to attend, the Raiders still enjoyed a raucous celebration after the final horn sounded.

“I credit the boys for this,” said Central coach DJ Conte. “They knew what they had to do to get ready for the season and put in a ton of effort. They are bigger, faster and stronger now, and our senior class was very special. We stayed away from COVID issues, and every day that we got to be on the ice was a blessing.”