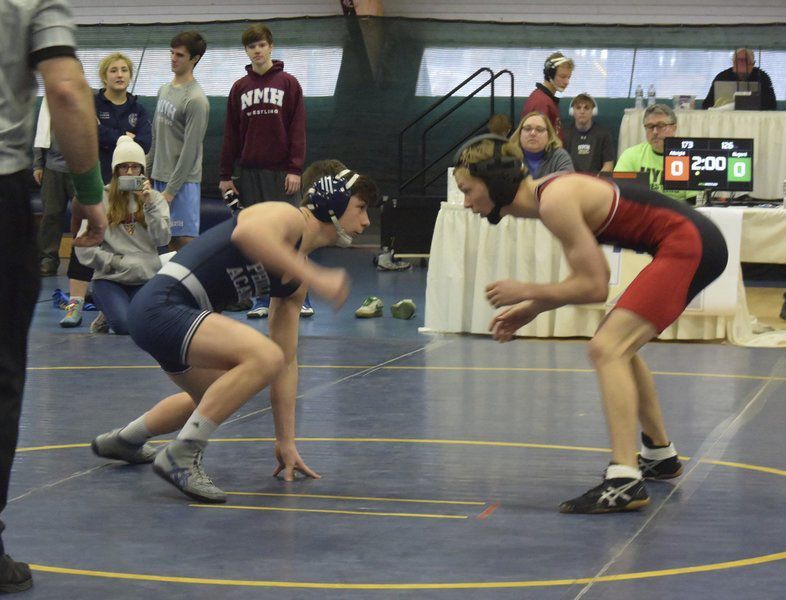 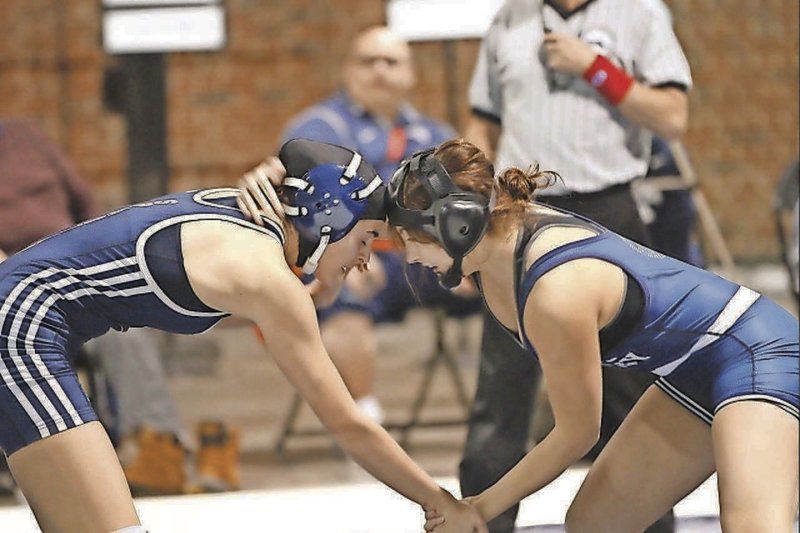 Courtesy photoPhillips Academy senior Marisol Nugent, right, is a five-time All-American who more than holds her own against boys. 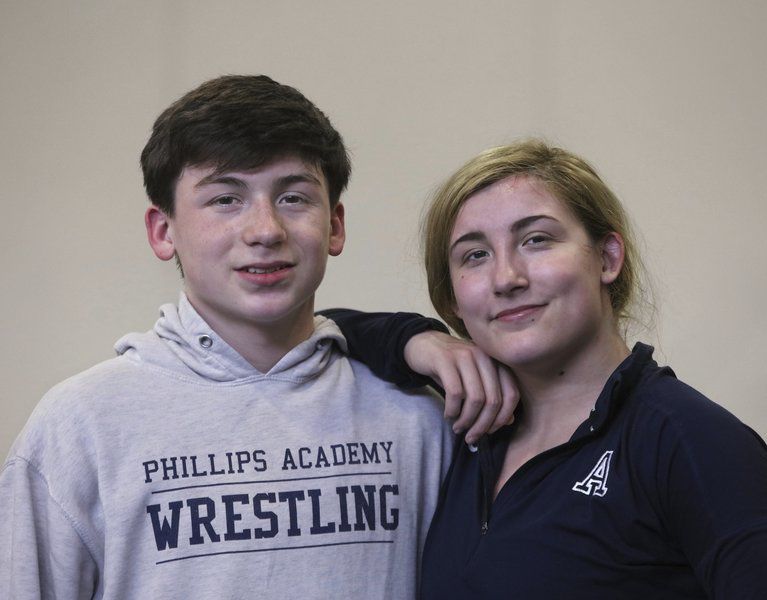 MIKE SPRINGER/Staff photoPhillips Academy siblings Colin and Marisol Nugent of Boxford are just part of one of the most prolific wrestling families in New England. Brother Trevor and sister Cara wrestle for the Governor'e Academy and younger sister Dani is a 7th grader at Masconomet. 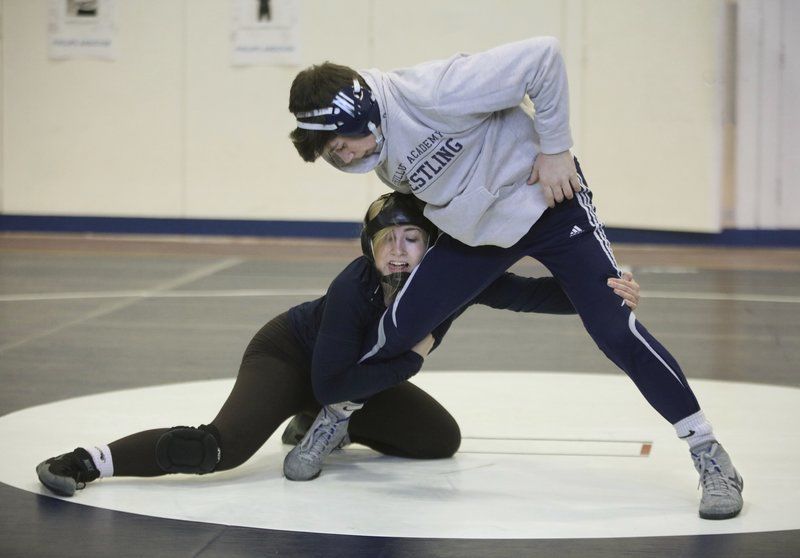 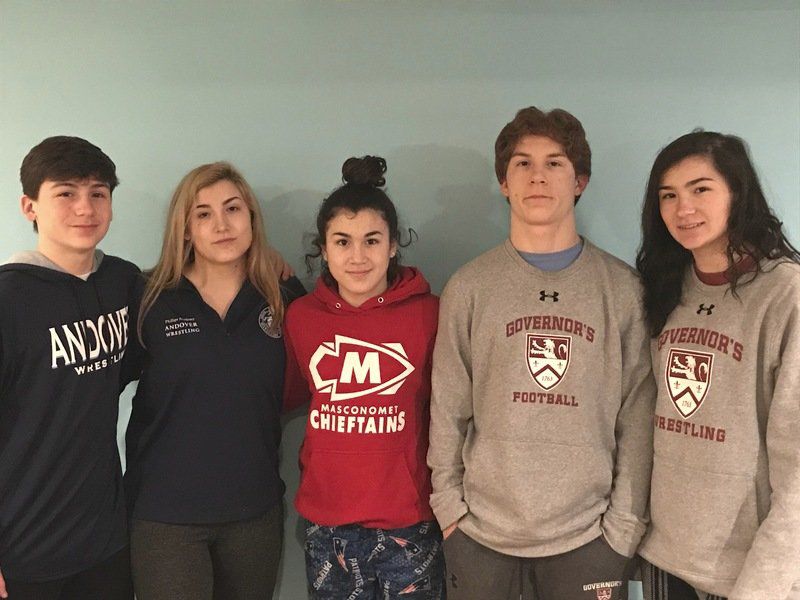 Courtesy photoPhillips Academy senior Marisol Nugent, right, is a five-time All-American who more than holds her own against boys.

MIKE SPRINGER/Staff photoPhillips Academy siblings Colin and Marisol Nugent of Boxford are just part of one of the most prolific wrestling families in New England. Brother Trevor and sister Cara wrestle for the Governor'e Academy and younger sister Dani is a 7th grader at Masconomet.

As far as Phillips Academy freshman Colin Nugent of Boxford is concerned, he has the perfect drill partner.

It’s his sister, senior Marisol Nugent, one of the top female wrestlers in New England.

Marisol may be up three weight classes than Colin’s 126 pounds, but that doesn’t matter.

“She gives me the best workout I can get,” said Colin. “She’s heavier than me, which is good, we both work really hard and it’s always very competitive. But we know when to stop.”

“Marisol and Colin are very similar wrestlers — very technical and very good hip sense,” said Archambault. “They’re really fun to watch while they are sparring because they get into really interesting scramble situations.”

Of course, Colin could also get a rugged workout from older brother Trevor, or sister Cara, both juniors, but they’re at Governor’s Academy,

Together, they comprise what must be the most talented wrestling family in New England, and there’s another on the way. That would be Dani, a seventh grader who, says father Joe Nugent, may become the most accomplished of the lot.

Although all of the young Nugents have their own styles, they all learned the basics from their father, who wrestled at Lynnfield and later Boston College, when it still offered wrestling.

He started coaching his kids, and others, with the Masconomet Youth Program and then helped found and run the Mercury Rising club out of Danvers.

When asked who has had the biggest impact on his wrestling, Colin doesn’t hesitate. “It’s my dad,” he says. “He got me into it and has been my coach for so long.”

But older brother Trevor — who Colin feels is probably the best wrestler in the family — has also been a big influence. “He (Trevor) is the one I look up to the most and I try to copy his style,” said Colin.

Trevor wrestled two years at Masconomet before transferring to Governor’s Academy and had success from the start.

He finished fourth at All-State as a sophomore 113-pounder, became a New England placer and was just shy of 100 wins in just two years. Last year he was fifth in prep New England at 126 pounds and he’s 18-1 at 138 this year.

But Marisol believes that Colin’s future is just as promising. He’s 19-2, with his only losses coming to Belmont Hill star Jimmy Harington and, wrestling up a class, North Andover’s Ethan Ford. The weekend before last, he rolled to the Class A title.

“I think Colin is one of the best freshman wrestlers in New England right now,” said Marisol. “He has great athletic ability and he’s starting to work harder than ever. I expect him to win four Class A titles here.

“I love having him on the team and he’s a great drill partner for me. He knows my style and he pushes me.”

Of course, Marisol doesn’t need excessive pushing. She proved that when she returned to the mat last month just six months following knee surgery for a torn ACL that doctors said would take nine months to recover from. Just three weeks after her return, she finished third in Class A at 145 pounds and has a 12-4 record.

Moreover, of all the Nugent clan, Marisol is probably the most accomplished. She is a five-time girl All-American, has been nationally ranked for years and last year she placed first at the prestigious Super 32 Tournament.

Although certainly pleased with her accomplishments, Marisol is proudest of what she has done to promote girls wrestling. She was instrumental in starting the “Doughgirls” wrestling team, which competes in tournaments and is growing all the time.

There are currently more than 30 girls in the Doughgirls program, one of them being talented Central Catholic freshman Jackie Dehney, who is also Marisol’s drill partner when the club works out.

Moreover, Marisol is constantly advocating for increased opportunities for girls in high school wrestling and she’s planning to attend Lehigh next year and, while wrestling for the Mountain Hawks club there, start laying the groundwork for a women’s team at the university.

For now, however, Marisol as well as Colin are focused on Prep New England. Colin has already achieved one of his season goals with the Class A crown, and a high place at New England is another.

So, with Marisol hoping to end her Phillips career on a high note, the two will keep drilling and pushing, something that is pretty common in the Nugent household.

STREAK ON THE LINE

Timberlane’s 184-meet New Hampshire winning streak will be on the line Wednesday at 7 p.m. when the Owls (14-2) host a strong undefeated Concord team. The Crimson Tide are the last NH team to beat Timberlane, back in 2007.

Also Wednesday, Andover goes for a share of the MVC Division 2 title when it hosts the same Lawrence team it lost to Saturday at the Hillie Duals.

Central Catholic, meanwhile, can grab a share of the MVC Division 1 crown Tuesday when it hosts Methuen at 4 p.m.

Cara Nugent, Governor’s Academy junior — Finished 5th at 2019 Folkstyle nationals. Has 9-2 record since returning from injury. ISL runner-up at 113 in 2018, took 6th this past weekend.