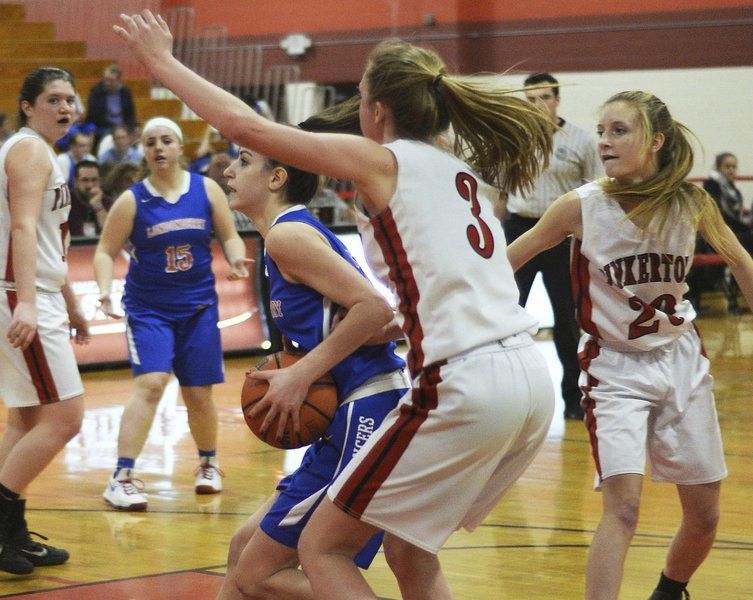 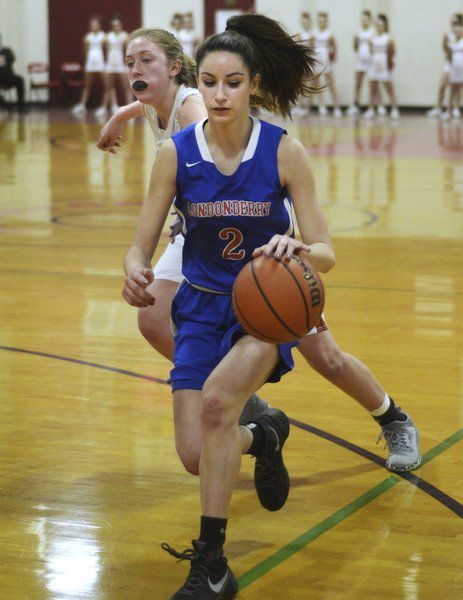 CARL RUSSO/Staff photo. Londonderry's Amanda DeAngelis has blossomed into one of the area's top scorers as only a sophomore after the Lancers lost much of their offensive firepower to graduation and transfers. 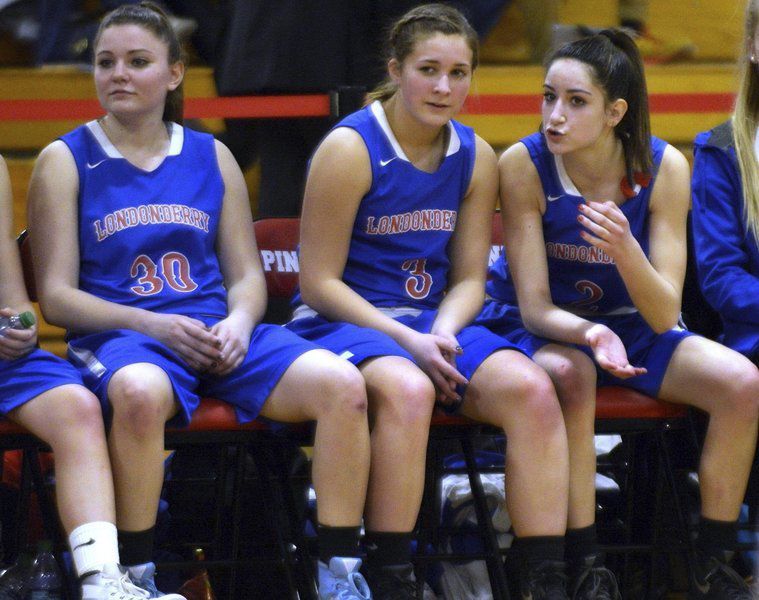 CARL RUSSO/Staff photo. Londonderry's, Amanda DeAngelis, right talks to her teammate, Michaela Downing. Still only a sophomore, DeAngelis has already grown into a vocal leader for the Lancers. 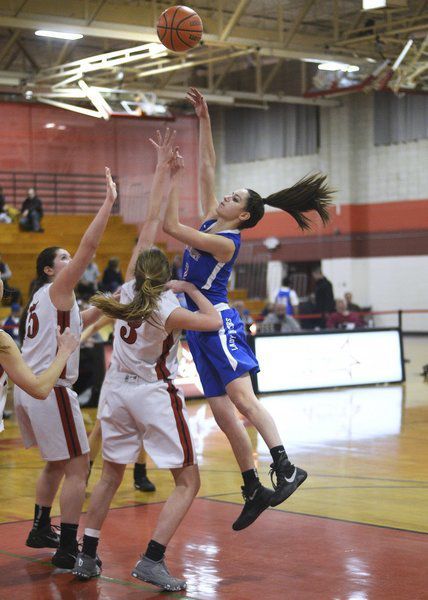 CARL RUSSO/Staff photo. Londonderry's, Amanda DeAngelis gets a shot over outstreched Pinkerton defenders. DeAngelis' length has helped her grow into one of the area's top-scorer this season.

CARL RUSSO/Staff photo. Londonderry's Amanda DeAngelis has blossomed into one of the area's top scorers as only a sophomore after the Lancers lost much of their offensive firepower to graduation and transfers.

CARL RUSSO/Staff photo. Londonderry's, Amanda DeAngelis, right talks to her teammate, Michaela Downing. Still only a sophomore, DeAngelis has already grown into a vocal leader for the Lancers.

CARL RUSSO/Staff photo. Londonderry's, Amanda DeAngelis gets a shot over outstreched Pinkerton defenders. DeAngelis' length has helped her grow into one of the area's top-scorer this season.

LONDONDERRY — After last season fell two wins short of a third straight state title, it was believed that Londonderry’s push back to the top would be led by their stellar sophomore.

So far that prediction has been correct — just with the wrong person.

Sophomore Amanda DeAngelis has dominated the headlines this season for the Lancers. She played limited minutes for coach Nick Theos last season swinging between the JV and varsity rosters, scoring just 23 points in 15 games. But after the season was over, she told her coach in a one-on-one meeting that all she wanted was to make the starting rotation this year.

Not only did DeAngelis crack the starting five with ease, she has become Londonderry’s most reliant and dependable scorer. She is seventh in the area averaging 13.9 points per game, having only been held in single digit points twice this season in 13 games. Her emergence as a 5-foot-10 two-way player that can score inside and shoot 3s has forced the rest of New Hampshire to take notice.

“I wasn’t expecting to be playing this well at all,” said DeAngelis. “I played mostly on JVs last year and didn’t really get a lot of minutes at the varsity level. It’s definitely still surprising to think about. But we’ve been winning some games and doing well which has made this season even more fun.”

Her coach has been a little less surprised.

“To be honest, I knew she was going to be one of my leading scorers,” said Theos, whose Lancers currently sit in fifth in NH Division 1 at 6-4, and are 6-7 overall including the Christmas Tournament. “We saw her talent, and I think for a while we’ve known what kind of player she was going to be.

“She just had the drive. A lot of these kids don’t want to put the work in. But when we talked after last season, she told me what she wanted and I told her what I think she needed to do to get there.”

In terms of the future of the program, Ashley Evans was suppose to be just that for Londonderry.

Last season as a freshmen, Evans averaged 6.4 points per game, and her 6-foot-1 frame gave the Lancers a consistent scoring and defensive threat in the low post believed to carry the program for the next three years. But, after the year was over, she transferred to Lawrence Academy.

Having grown up playing AAU and Rec ball with her since early elementary school, DeAngelis realized the impact of Evans’ departure.

“It was a pretty big,” said DeAngelis. “She’s over 6-feet, so losing her height was huge. After her, I was the next tallest player, so it forced me to focus more on becoming a better rebounder.”

Sure, the Lancers still had senior Kelsey Coffey returning to the team, who last year was an E-T All-Star as well, averaging an even 10.0 points per game. But if the team was going to return back to the top of Division 1, she was going to need the help that DeAngelis is providing.

“I knew I needed to step up this year because I knew that our team needed help,” said DeAngelis. “I felt like I needed to contribute in any way I could.”

DeAngelis has been playing hoop since first grade, crediting her dad, Mark, who was her Rec league coach growing up, as the one who get her into the sport. She has been a part of eight AAU teams, and currently plays year-round for the Eastern Blizzards.

After her talk with coach Theos last season, DeAngelis knew she had to make it a point to focus on getting stronger.

“Last spring, I started Crossfit training and that changed everything,” explained DeAngelis. “I got so much stronger. Over the summer, I would be doing that six days a week for an hour, and then I would come home and shoot at the hoop at my house for an hour and a half.”

Besides drastically increasing her scoring output, DeAngelis has also bumped up her rebounding to just over six per game. The Lancers have eight more games until the postseason, and will need their new stellar sophomore to continue her production that has helped the team get to where it is now.

But so far, her improvement has already impressed many in the Granite State.

“I’ve been around this program 20 years and have coached players like (Stefanie) Murphy who played at Boston College and Aliza Simpson who is playing for UNH,” said Theos. “I think Amanda can go as far as she wants to. She has the skills, and I think she has shown to have the work ethic to accomplish whatever she wants.”

While seniors Alyssa Casey and Lilly Shlimon have controlled the top two spots on the area scoring leaders all season, the upper half of the list continues to feature many promising underclassmen.

And none are younger than Whittier freshmen Grace Efosa, who is eighth in the area averaging 13.5 points per game for the 12-1 Wildcats. She has been held under 10 points just twice this season, and scored a season-best 20 points in a win over Shawsheen.

While our New Hampshire area boys teams are more towards the middle of the pack, some of our girls teams pose as potential favorites heading into the playoffs next month in all three Divisions.

In Division 1, Pinkerton sits in fourth at 8-1 with its lone loss coming to a 9-1 Alvirne team. Bedford, 11-1, and Bishop Guertin, 9-1, highlight the field, but Pinkerton and 6-4 Londonderry are right there.

At 10-1, Pelham stands just ahead of fellow one-loss teams Portsmouth, 9-1, and Bishop Brady, 8-1, which are all looking up at 9-0 Lebanon in Division 2. Still, the Pythons are right there in second, and even Windham at 6-3 is capable of making some noise.

And as our lone Division 3 team, Sanborn is currently fourth at 10-1 just behind 11-1 Prospect Mountain and Kearsage and 13-0 Newfound.

Despite it coming in a losing effort, the area still saw it’s second 30-point scoring performance to date this season when Greater Lawrence’s Laisha Joaquin scored 30 of the Reggies 36 total points last week against Chelsea.

Such has been the case with Georgetown, but last week the Royals earned their first win in a 35-34 nail-bitter over Rockport. Emma Dunlevy led the way with 11 points in the win, and Caitlin Donoghue added 10 points.

Well done ladies, and kudos to coach Dave Tucker for continuing to call in and highlighting his athletes game after game. Here’s to more Ws!