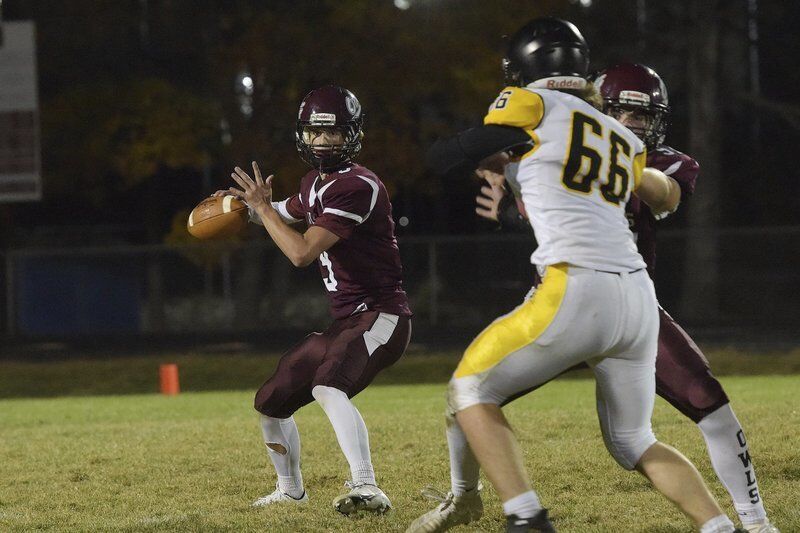 TIM JEAN/Staff photoTimberlane quarterback Ethan Stewart looks to pass against Souhegan. While he admits he isn't completely comfortable at QB, Stewart has turned in big plays for the Owls. 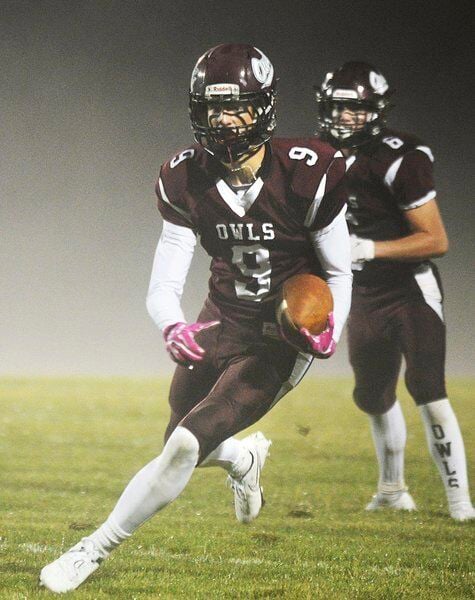 CARL RUSSO/staff photoTimberlane's Ethan Stewart, here running for a big gain against Sanborn, moved to quarterback midway through this season, and has helped lead the Owls to the Division 2 semifinals. 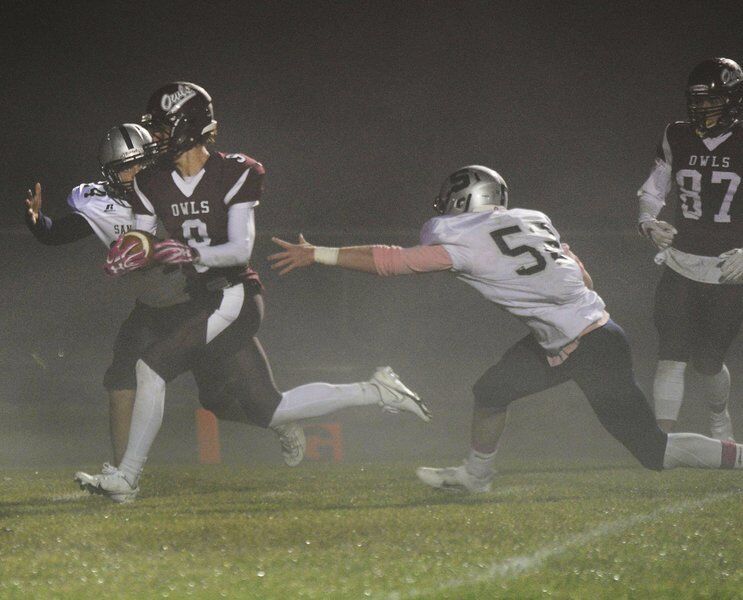 CARL RUSSO/staff photo.Timberlane's Ethan Stewart sprints into the end zone for a touchdown as Sanborn. He ran for a career-high 131 yards in the victory.

TIM JEAN/Staff photoTimberlane quarterback Ethan Stewart looks to pass against Souhegan. While he admits he isn't completely comfortable at QB, Stewart has turned in big plays for the Owls.

CARL RUSSO/staff photoTimberlane's Ethan Stewart, here running for a big gain against Sanborn, moved to quarterback midway through this season, and has helped lead the Owls to the Division 2 semifinals.

CARL RUSSO/staff photo.Timberlane's Ethan Stewart sprints into the end zone for a touchdown as Sanborn. He ran for a career-high 131 yards in the victory.

The Timberlane junior opened this fall as a starting slot receiver, making plays with his legs, a top defensive back and key special teamer.

But now, with Timberlane one upset away from the program’s first state championship berth in nearly two decades, Stewart holds the title he never planned to possess — starting quarterback.

“I never imagined I would be playing quarterback” said Stewart. “I’ve always played wide receiver at the high school level, so I never really expected this.”

Called upon to take over at QB due to injury in Week 3 this season, Stewart will lead Timberlane (3-3) into action when it travels to No. 1-seeded Souhegan (6-0) in the Division 2 state semifinals on Saturday at 1 p.m. Souhegan won the regular season meeting 41-8.

A win would send the Owls to their first state championship game since they beat Bishop Guertin 28-20 in the 2001 Division 2 title game.

“It feels amazing to be here,” said Stewart. “We’ve worked so hard to get to this point. We are definitely hopeful. We have a solid game plan, and if we stick to that, I believe that we have a very good chance. Everyone is hoping to do something special.”

Stewart does just about everything for the Owls. He ranks second on the team in rushing yards (38 carries, 314 yards) and touchdowns (6), is in his second season as a starting cornerback and is the team’s top kickoff and punt returner.

“Ethan is a great kid who is coachable, intelligent and a great teammate who has grown into a leader in this program,” said Timberlane head coach Kevin Fitzgerald. “His confidence has grown this season. Playing quarterback would certainly not be his first choice, but he knew it was the move we had to make, and he has been an impact player.”

Stewart’s impact on offense, to start the 2020 season, was at slot receiver in the Timberlane’s run-heavy wing-T offense. His breakout performance came in Week 2, when he rushed for 131 yards with touchdowns of 60 and 70 yards in a win over Sanborn.

Change came the following week, when then-starting QB Dom Coppeta went down with an injury.

“When I got to practice, one of my teammates told me that Coppeta was heading to the hospital,” Stewart remembered. “I was worried (about moving to QB), but I knew that I had to do what I had to do, and couldn’t let the team down.”

“I had played QB at a very young age. But as I grew older, I moved to wide receiver while being the backup quarterback on most of the teams I played for. I’ve always felt more confident playing wide receiver, but I knew I needed to step up.”

In his first varsity start at quarterback, against St. Thomas, Stewart rushed for 104 yards and threw an 8-yard touchdown to Robert Olson.

“I started to get comfortable during the second drive of the St. Thomas game,” said Stewart, who has thrown for 114 yards. “I was rolling out on a pass play, and saw green grass, so I took off. I ended up breaking a long run and it helped my confidence a lot. I enjoy being able to take control in the huddle and be a leader on the field.”

When he isn’t behind center, Stewart’s playing defense or returning kicks.

“It can definitely get pretty exhausting, but I love it,” he said. “My job at cornerback is to not let up the deep ball. Although I’m (focused on) pass first, I love being able to come and make tackles; those have been some of my favorite plays.”

After rushing for two touchdowns in Timberlane’s playoff opener, Stewart is now looking to lead Timberlane to an upset on Saturday.

“We have definitely gotten better (since the Souhegan loss),” he said. “We’ve continued to work very hard at practice, and we have also gotten some key players back from minor injuries. We need to come out strong and never let up.”

The No. 1-ranked team in New Hampshire stands between Salem and its first trip to the state championship game since 2009.

The Titans are led by superstar QB Curtis Harris-Lopez, who has run for 705 yards and 12 touchdowns on 81 carries this season. He ran for 145 yards and 4 TDs in last week’s quarterfinal win over Merrimack.

Timberlane quarterback Ethan Stewart is also a star away from the gridiron.

Stewart is also a varsity forward in basketball and a member of the perennial power Owls volleyball team.

“I love being a three-sport athlete,” he said. “It helps make me a better teammate and helps me never give up when things get hard.”