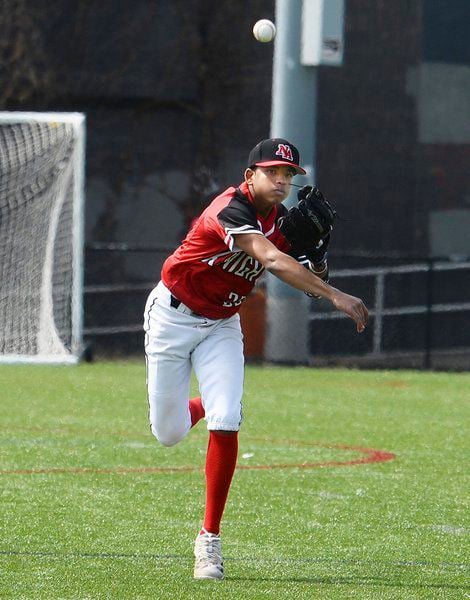 CARL RUSSO/Staff photoNorth Andover shortstop, Paul Fernandez makes the throw to first during a scrimmage last year as a sophomore. 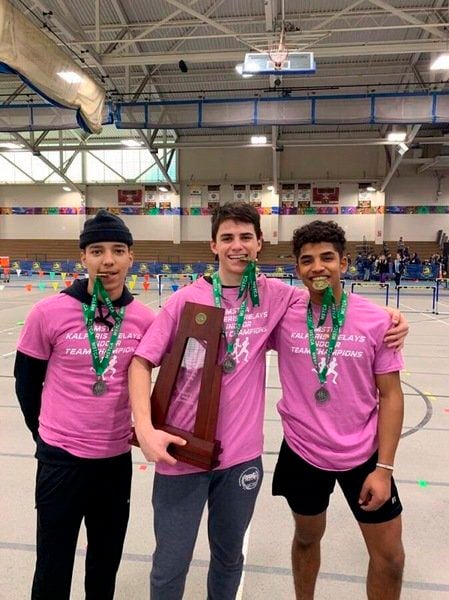 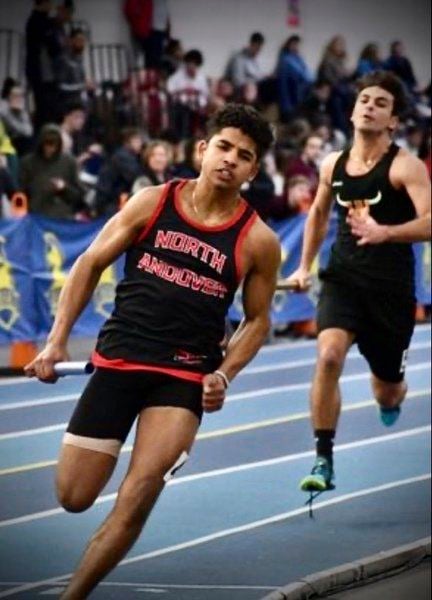 Courtesy photoPaul Fernandez carries the baton around the curve. He was the second leg on North Andover's 4x400 relay, which set a school record with a 3:23.89 and finished second at All-State.

CARL RUSSO/Staff photoNorth Andover shortstop, Paul Fernandez makes the throw to first during a scrimmage last year as a sophomore.

Courtesy photoPaul Fernandez carries the baton around the curve. He was the second leg on North Andover's 4x400 relay, which set a school record with a 3:23.89 and finished second at All-State.

If only North Andover junior Paul Fernandez lived and went to school in New Hampshire.

If he did, Fernandez leaves no doubt that he’d double up on sports in the spring, adding outdoor track to his first love, baseball. In Massachusetts, athletes are prohibited from playing more than one sport per season, but it’s permitted in the Granite State.

“It would be tough physically, but definitely I would try it,” said Fernandez, a shortstop who has also played in the outfield. “That’s what I told my (track) coaches. I’d love to do it.”

Based on his stellar indoor track season, Fernandez’s dual enthusiasm is understandable. He was a valuable member of three relays, including the Division 2 state champion 4x400 unit that went on to finish second at All-State in a school record 3:23.89 and qualify for nationals.

It’s no wonder that boys track coach Steve Nugent salivates at what Fernandez could do in outdoor track.

“I wish he wasn’t so good at baseball, and I also wish (baseball coach) Todd Dulin wasn’t my friend because I would do anything to see Paul compete for our outdoor track team,” said Nugent.

“Paul is an incredibly talented track athlete who is only scratching the surface when it comes to what he is capable of. He is a gifted athlete; however, he backs it up with a tremendous work ethic.  His smile is contagious and it always looks like he’s having fun.  He also is a fierce competitor.”

Fernandez first started in track as a freshman with one intent in mind.

“My mindset was that it would help me get faster for baseball,” said Fernandez. “But I started liking it more and more and I really started to get into it.

“My favorite event is the 300. When you finish it, you feel dead, like you never want to run it again. But it’s really rewarding.”

Still, Fernandez leaves no doubt that baseball is his favorite sport, and he certainly puts a lot of time and effort into it.

Last summer, for example, was entirely focused on baseball. He went for two weeks to College Hill Baseball, a workout and showcase program just outside of Dallas in Texas, and then went with his family to the Dominican Republic, where he played a ton of baseball the rest of the summer while visiting relatives.

While home, when not in season, Fernandez works out and plays for Hitters Home in Lawrence and he has a personal trainer who has been working with him for several years.

All of the work has paid off and Dulin has certainly noticed Fernandez, who swung between JV and varsity last year.

“He was projected to be our leadoff hitter and Derek Finn would have hit second,” said Dulin. “And he would have competed with Derek Finn to play at short, and if not there in the outfield. He is a very talented athlete and he works really hard at his game.”

Playing behind superstar Jake McElroy last year, Fernandez got little varsity time at shortstop, but he learned plenty from the three-sport standout.

“The thing I took away from him (McElroy) most is the way he takes practices and games — he always was working hard and his mood never changed,” said Fernandez. “He always seemed to be really calm no matter the situation. I try to imitate that.”

With the high school season cancelled, Fernandez has done his best to stay sharp. He uses a net and batting tee in his backyard or will go over to Thomas Field for batting practice, often with good friend Julie Osorio, who plays for St. John’s Prep.

And, he also does some sprint work, which keeps him conditioned for track and — as was his original intent — is beneficial for baseball.

“It (track) definitely made me faster for baseball,” said Fernandez. “I think coach Dulin has seen that. What I like about him is if he has confidence in you, he’ll let you steal (bases) whenever you want to try. Jake could do that and I think I could, too.”