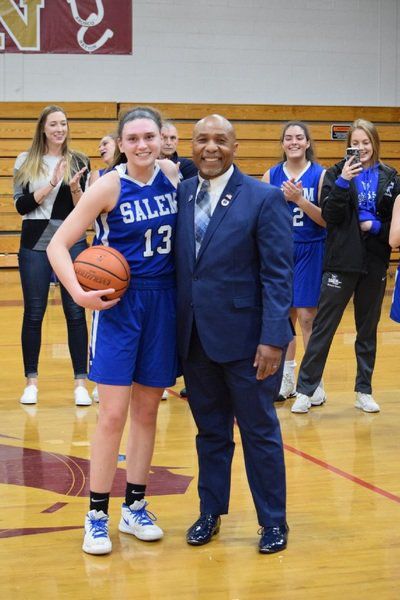 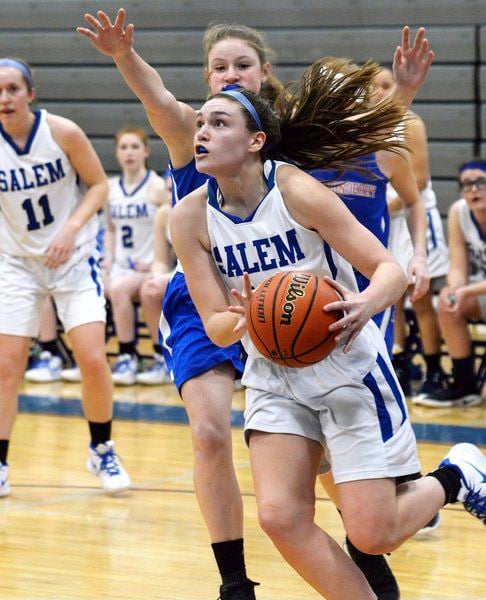 CARL RUSSO/Staff photoSalem's Jordyn Franzen has scored a lot of points in her high school career, 1,018 to be exact. The senior crossed the 1,000-point milestone Tuesday night.

CARL RUSSO/Staff photoSalem's Jordyn Franzen has scored a lot of points in her high school career, 1,018 to be exact. The senior crossed the 1,000-point milestone Tuesday night.

HUDSON — Jordyn Franzen corralled the offensive board off a missed free throw, dribbled out of the paint and found herself wide open behind the 3-point line.

This was her moment.

The senior let fly the silky-smooth jumper Salem fans have come to love over the past four years and, as the ball swished through the net, the Blue Devil sideline and faithful who had traveled to Alvirne High Tuesday night erupted in joy. In the Salem section of the stands, four balloons that spelled out “1,000” flew high in the air.

With her sixth point of the night, coming late in the first quarter, Franzen had hit the 1,000 mark for her career, right on the button. The game, which Salem eventually won 55-48, was momentarily stopped, as Franzen was honored at center court.

“I think, honestly, I was really excited, but it was a lot of relief,” said Franzen. “I was just really glad that it happened.

“I never thought I’d get here. I was kind of scared coming in as a freshman. (1,000) felt like such a big number, and I never expected to do this. But coach (Ricky) Oliver said it to me from Day 1 that I was going to be a 1,000-point scorer.

“I didn’t believe him, but it happened and it’s just crazy.”

Fraznen finished her memorable night with a team-high 24 points with four 3s in the win.

“When I met Jordyn in her eighth-grade year, as I’m coming to Salem, I looked at her and watched how she shot and I was like, ‘This girl is going to be my next 1,000-point scorer,” said Oliver. “And I told her that.

“But she didn’t believe it. She goes, ‘Coach, I don’t shoot it well enough.’ And I told her, what we’re going to run offensively is going to get you to be an 1,000-point scorer.”

And, as it turned out, the high of reaching the milestone had little to no affect on Franzen’s game.

The Blue Devils (13-5, 9-5 NH) trailed 27-24 at halftime, and still found themselves down midway through the third. But Franzen went on her own 7-0 run to give her team a lead it wouldn’t give up, and freshman Olivia Murray drilled a step-back three at the buzzer to put the Blue Devils up 41-35 heading into the fourth.

Alvirne (2-11 NH) never went away, but Carly Saif (11 points), Franzen and Sydney Emerson (7 points) made clutch buckets down the stretch to close it out.

“Good kid, great student, and just a good leader that these kids love to be around.”

Hall of Famer Sharon Playdon Wheeler (Class of ‘80) had approximately 1,200 points before going onto an all-star career at Springfield College. Becky Valenti (SHS ‘00), who earned a scholarship to Division 1 St. Bonaventure, scored 1,086 points with the Blue Devils, while Allie Sirmaian (SHS ‘16) scored 1,051.

Franzen now sits at 1,018 with four regular season games left and at least one playoff game. The standout senior averages 13.8 per game, so there’s a strong chance she could finish her stellar career at No. 2 all-time.

“It doesn’t seem real,” said Franzen, who is still unsure on her college hoop plans but knows she wants to major in nursing wherever she goes. “I’m just really grateful to have had such great teammates and coaches who have helped me do all of this.”

FRANZEN BY THE YEARS