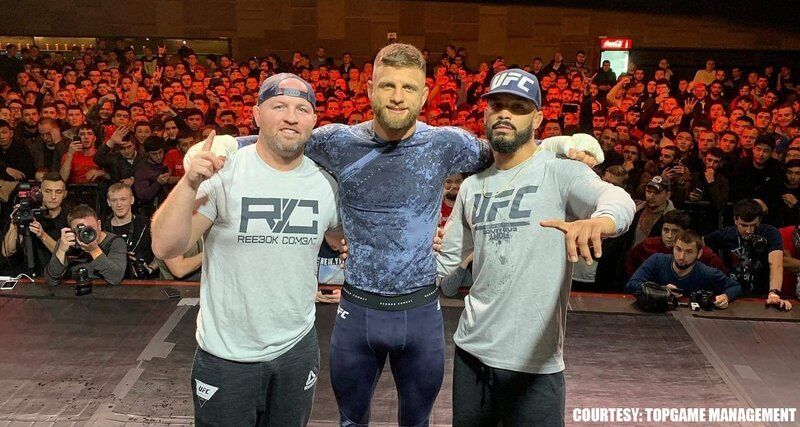 When Calvin Kattar, in middle, fought in Moscow in November of 2019, his New England Cartel teammate Rob Font, on right, was with him as a training partner and cornerman. NE Cartel manager and trainer, Tyson Chartier, is on the left. 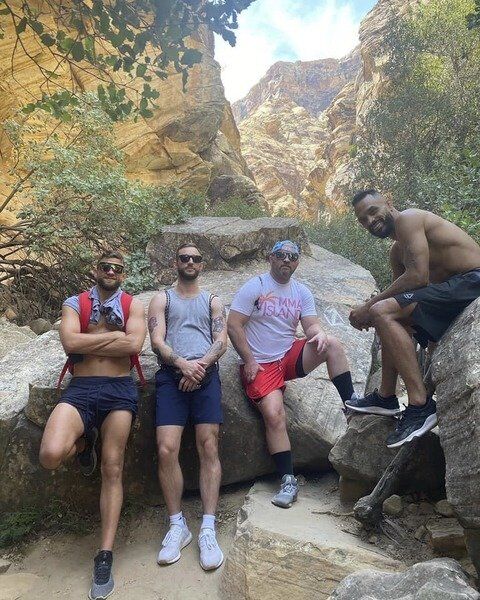 Rob Font, of Haverhill, on right, takes a little break from training to go hiking about 30 miles from Las Vegas with some of his guys from the New England Cartel team, including, left to right, Methuen native Calvin Kattar, Jake Mainini (Muay Thai coach), and manager/trainer Tyson Chartier. Font will be fighting in the main event on the UFC card Saturday night in Las Vegas.

When Calvin Kattar, in middle, fought in Moscow in November of 2019, his New England Cartel teammate Rob Font, on right, was with him as a training partner and cornerman. NE Cartel manager and trainer, Tyson Chartier, is on the left.

Rob Font, of Haverhill, on right, takes a little break from training to go hiking about 30 miles from Las Vegas with some of his guys from the New England Cartel team, including, left to right, Methuen native Calvin Kattar, Jake Mainini (Muay Thai coach), and manager/trainer Tyson Chartier. Font will be fighting in the main event on the UFC card Saturday night in Las Vegas.

Rob Font turns 34 in June. As a world championship contender, though, he’s constantly learning the ropes, or better put, his way around the cages.

The Haverhill resident has grown up fast in mixed martial arts (MMA) among the major leagues of his sport in the Ultimate Fighting Championship (UFC), with a 7-3 record since 2014, winning three straight as a bantamweight (135 pounds).

On Dec. 19, he stunned the MMA world, KOing top-ranked Marlon Moraes in the first round. He was supposed to be a filler bout for Moraes’ title charge. Now it’s Font, ranked No. 3, fighting former champ Cody Garbrandt, currently ranked No. 4, nearing a potential title bout on Saturday night in Las Vegas as the main event.

The shoe is on the other foot for Font, who is best friends with Methuen native Calvin Kattar. In January, he was in Kattar’s corner when he suffered a tough defeat against UFC legend Max Holloway. On Saturday night, Kattar will be in his corner.

“We are best friends,” said Font, of Kattar, who is the No. 5 ranked featherweight (145 pounds). “Honestly, when I first met him, I didn’t think we’d be friends. I expected not to like him. Then we started being together and we’re like brothers. He and I do everything together.”

The duo teamed up with manager Tyson Chartier, including three assistant coaches, to form the New England Cartel.

Font is representing more than himself on Saturday night.

“We are a real team. We do everything together. Calvin and my career changed for the better when we formed our own team and work off each other,” said Font, of Puerto Rican descent, and a native of Leominster. “It’s so cool that we have each other to work out against. In the future, our goal is to grow the team. We have some young guys who are moving up.”

While his girlfriend, whom he met in Florida more than a decade ago, is close by, the Kattar family, particularly his mom, have taken him in like a son, brother and friend.

“Calvin has a great family and his mom (Sandi) has done so much for me, especially cooking,” said Font.

Chartier, who fought locally in MMA before moving to training and managing, said the team, with Font and Kattar as headliners, have helped grow the New England Cartel brand, drawing interest from many amateurs and young professionals.

“They both are very talented, first and foremost,” said Charlier. “They’re tough. They’re athletic. But what I appreciate about both of them is their willingness to learn. And they are quality people. It’s a pleasure dealing with both of them.”

As “fighters,” Chartier said they both have similar skill sets.

“Both have some of the best jabs on the roster,” said Chartier. “Both have such different backgrounds which got them here. Calvin started as a wrestler in high school and this was natural for him. Rob was a very good athlete who learned mixed martial arts from scratch. But now both are here.”

Kattar was the first to get a bout of this stature, a main event on a UFC card, losing to Holloway. Despite being dominated by Holloway, a former world champ, Kattar moved up from No. 6 to No. 5 in the rankings, rewarded for his toughness and ability to take punishment.

Kattar and the New England Cartel are hoping for another "main event" this fall.

“These guys are both tough, like, very tough,” said Chartier. “Calvin had his big fight in January. Now it’s Rob’s turn on Saturday. This is what we dreamed about when this team was really formed, for these kinds of events.”

Rob Font is still learning on the job as a world contender for a UFC title.

He also learned something this past week while prepping for his bout on Saturday night. He loves hiking.

Font, Calvin Kattar and manager Tyson Chartier were among several New England Cartel members and their girlfriends who went hiking about 30 miles outside of Las Vegas.

“I couldn’t believe how beautiful it was out there, seeing the mountains in the background,” said Font. “I had never hiked before. But this was fun. I’m already hooked. It’s something I want to do when I get home. It’s just very relaxing.”