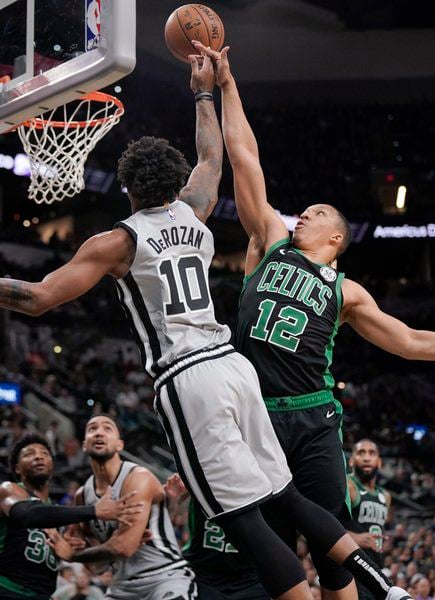 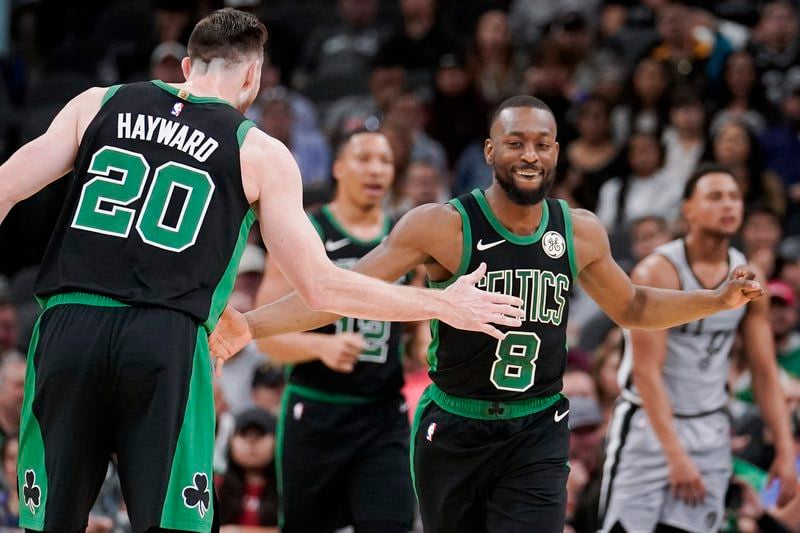 AP Photo/Darren AbateKemba Walker (8) and Gordon Hayward celebrate a basket. The Cs won, but Hayward had to leave the game with a fractured hand.

AP Photo/Darren AbateKemba Walker (8) and Gordon Hayward celebrate a basket. The Cs won, but Hayward had to leave the game with a fractured hand.

SAN ANTONIO (AP) — Jaylen Brown scored 30 points and the Boston Celtics routed the San Antonio Spurs 135-115 on Saturday in a victory that was tempered by the loss of Gordon Hayward, who fractured his left hand late in the first half.

There was a somberness to the victory, though, as Hayward suffered his second significant injury since signing with the Celtics three seasons ago.

The Boston forward fractured his left hand after colliding with San Antonio’s LaMarcus Aldridge with just over a minute remaining in the first half. Hayward was sent for an X-ray that confirmed the diagnosis. He did not return to the game. The Celtics said Hayward will miss at least a month and he could undergo surgery, according to coach Brad Stevens.

“Going to get with the doctors tomorrow and decide if he needs to do surgery or not,” Stevens said. “Sounds like should he decide that the surgery option (is best, it) might actually be a better timeline. So, we’ll see what that all plays out to be.”

Boston has not lost since dropping its season opener to Philadelphia, 107-93, on Oct. 23. The Celtics have outscored their opponents 115-101 since that opening loss and raised that dominance against the Spurs.

Boston sped up its pace and went on a 19-3 run after giving up the game’s first seven points. Every Celtics starter scored during the run, including seven straight points from Brown to ignite the rally.

Spurs coach Gregg Popovich called a full timeout and replaced all five of his starters in one mass substitution five minutes into the game, but that didn’t stem Boston’s momentum.

The dominance continued throughout the second quarter until Hayward exited.

Hayward winced in pain after banging his left hand against Aldridge’s chest attempting to get past the Spurs forward on a screen late in the first half. Hayward appeared to jam the hand once or twice more against Aldridge before exiting the game.

Hayward had nine points and two rebounds in 15 minutes before exiting. He is averaging 20.3 points this season for the Celtics. The 6-foot-7 Hayward missed the 2017 season after breaking his leg six minutes into Boston’s season opener.

“This one doesn’t feel near as bad as it did two years ago,” Stevens said. “So, he’ll be back. Be off for a few weeks or a month or whatever it is.”