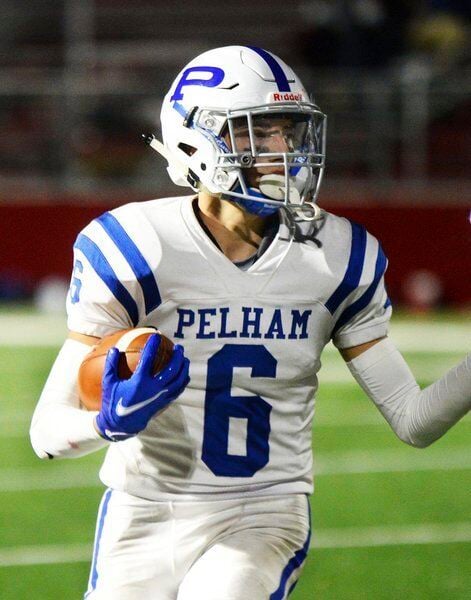 CARL RUSSO/staff photoPelham's Jake Herrling looks for running room. Herrling is a top running back and defensive back for the undefeated Pythons. 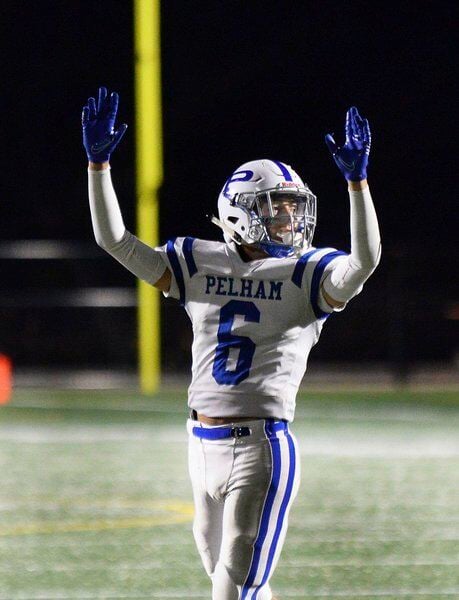 CARL RUSSO/staff photoJake Herrling, here signaling for a touchdown against Trinity, has helped lead Pelham to a 7-0 record. The Pythons will play for a state title on Saturday. 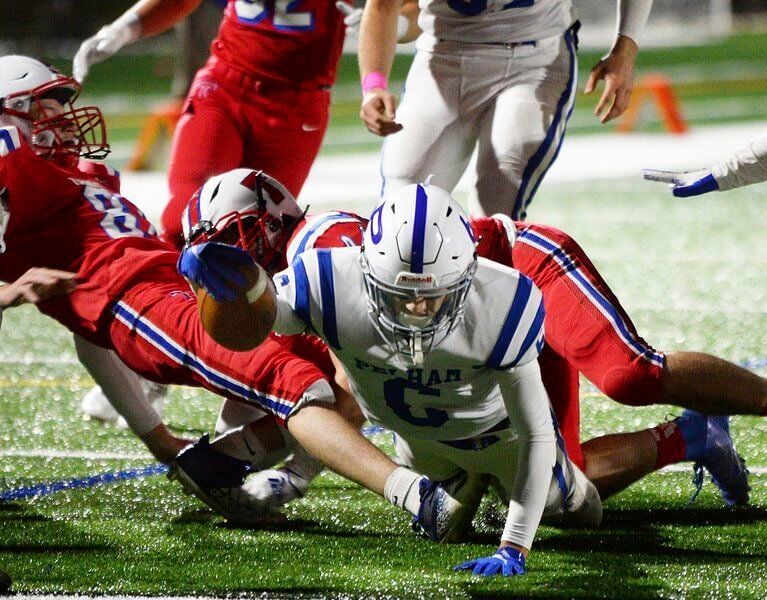 CARL RUSSO/staff photo.Pelham's Jake Herrling dives into the end zone for one of his six touchdowns this fall, this one against Trinity. 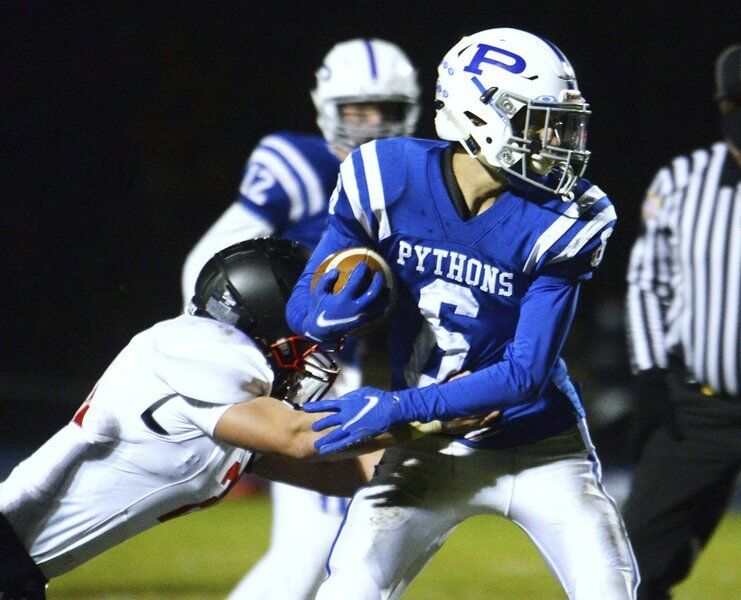 CARL RUSSO/staff photoJake Herrling, here shaking off a tackle against Campbell in the Division 3 quarterfinals, leads Pelham in rushing yards and touchdowns.

CARL RUSSO/staff photoPelham's Jake Herrling looks for running room. Herrling is a top running back and defensive back for the undefeated Pythons.

CARL RUSSO/staff photoJake Herrling, here signaling for a touchdown against Trinity, has helped lead Pelham to a 7-0 record. The Pythons will play for a state title on Saturday.

CARL RUSSO/staff photo.Pelham's Jake Herrling dives into the end zone for one of his six touchdowns this fall, this one against Trinity.

CARL RUSSO/staff photoJake Herrling, here shaking off a tackle against Campbell in the Division 3 quarterfinals, leads Pelham in rushing yards and touchdowns.

The moment Pelham senior Jake Herrling has long dreamed of is now within reach.

On Saturday, Herrling and Pelham will look to cap a perfect season, when the Pythons (7-0) host Stevens (3-2) in the Division 3 state championship game (1 p.m.)

The title game is the first for Pelham — the No. 1-ranked team in Division 3 — since it won back-to-back Division 5 championships in 2007-08. Those were the first titles in program history.

“The energy around Pelham is ecstatic right now,” said Herrling. “Being able to compete in a championship game is something our school hasn’t done in a decade, so our team and town are excited and ready to go.”

Leading the way for Pelham is Herrling.

The 6-foot, 155-pound running back leads the Pythons with 504 rushing yards on just 56 carries — an average of 9.0 yards a rush — and has scored a team-best eight touchdowns.

At free safety, Herrling is a key piece to a Pelham defense that has five shutouts and has surrendered just 670 total yards on the season, an average of 95.7 yards per game.

“Jake has been vital to our success,” said Pelham coach Tom Babaian. “He has seen ups and downs during his four years, and used that knowledge on and off the field. His teammates look to him for guidance and direction, and Jake always has the right things to say. He’s an impressive young man who remains humble in the midst of success. Jake is very cerebral on the field, which is often overlooked.”

The seeds for this year’s title run were planted last fall, when Pelham finished 7-3 in Division 2, but dropped a tourney heartbreaker to Plymouth, 14-12, when the Pythons were stopped at the goal line in the final moments.

“That game against Plymouth still haunts me,” said Herrling, who starting playing football in second grade for the Pelham Razorbacks. “Coming back from that has really pushed us to never want to feel those emotions again.”

Herrling — who ran for 177 yards and scored three TDs last fall — saw his team could be a true contender during the summer.

“I figured out that this team was special once training camp hit,” he said. “The chemistry we built over this season is an unbreakable bond.

“The dedication and determination of this team is rare, considering quarantine and the sacrifices of staying inside to prevent COVID-19. That really showed what type of team this is. All of the adversity we have faced over this season has really made us stronger as a unit. That makes us a championship contender.”

Herrling’s big plays have also been key. He has rushed for five touchdowns, including three 50-plus yard scores. He has one touchdown catch — an acrobatic TD where he was flipped head-over-heels — and has returned a kickoff for a score.

“On offense, as a running back, my job is to be a leader,” he said. “I have to put others in the right positions to win. Breaking plays is fun but full credits goes to my teammates.

“At free safety, with such a young defensive group, my job is to put the young guys in the right positions. They are a great group of guys that have a bright future.”

Now, Herrling is looking to end his high school career with a state championship.

“If we study, lock in, and play Pelham football, we’re capable of anything,” he said. “A state championship game is different from a regular game, so everyone needs that laser focus all week. We will do our jobs and leave it all out there on Saturday.”

Pelham, which has dominated its way to a 7-0 record, faces a Stevens team that took a unique road to the Division 3 title game.

The Cardinals (3-2) were 1-2 in the regular season, edged Laconia (22-21 in two OTs) in their tourney opener, then advanced to the title game when Winnisquam had to forfeit due to COVID-19.

A dangerous backfield has led Pelham into the Division 3 title game.