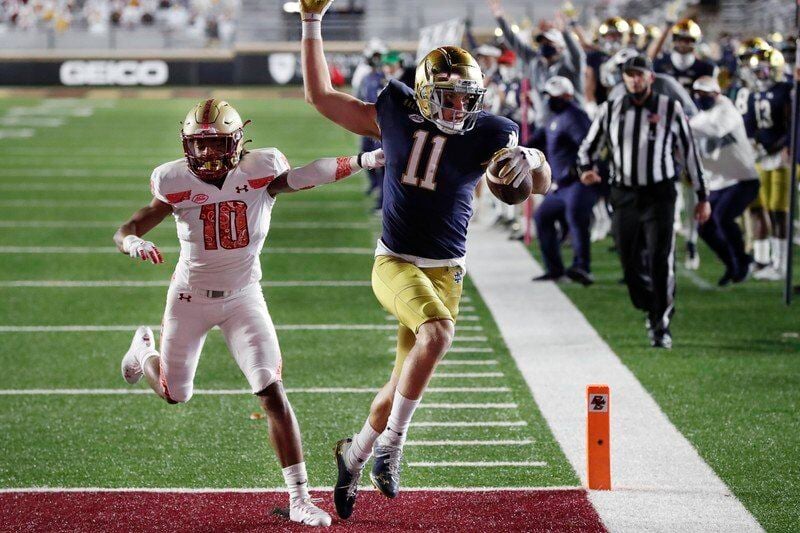 AP Photo/Michael DwyerNotre Dame wide receiver Ben Skowronek runs the ball in for a touchdown against Boston College defensive back Brandon Sebastian during the first half Saturday. AP Photo/Michael DwyerNotre Dame wide receiver Ben Skowronek runs the ball in for a touchdown against Boston College defensive back Brandon Sebastian during the first half Saturday.

BOSTON (AP) — Ian Book passed for three touchdowns and ran for another and No. 2 Notre Dame overcame an early deficit to roll to a 45-31 over Boston College on Saturday.

The Fighting Irish’s eighth straight victory in the series between the FBS’s only Catholic institutions gave coach Brian Kelly his 100th career victory at the school, tying him with Lou Holtz for second all-time. He is now just five behind coach Knute Rockne.

He also ran for a 85 yards and a touchdown. Ben Skowronek caught all three of Book’s TD passes, but also had one of three Notre Dame fumbles on the day. C’Bo Flemister ran for two touchdowns before leaving the game in the fourth quarter with an apparent left leg injury.

Phil Jurkovec, a transfer from Notre Dame playing against his former team for the first time, finished 18 of 40 for 272 yards, a touchdown and interception for Boston College (5-4, 4-4).

Th Eagles hung tough in the first half, recovering a pair of Notre Dame fumbles, but they scored only six points off the miscues.

Their defense also had few answers for Book, who took advantage of the Irish’s length at receiver throughout the game to produce five pass plays of 20 or more yards.

The Eagles jumped out to a 10-3 lead in the first quarter before the Irish outscored them 28-6 the rest of the first half.

Boston College had a chance to cut into a 24-16 deficit late in the second quarter after Notre Dame’s Kryen Williams fumbled following a hit by BC’s Chibueze Onwuka. The ball was recovered by Isaiah McDuffie on the Irish 42.

But BC gave it right back three plays later when center Alec Lindstrom snapped the ball before Jurkovec was expecting it. It was recovered by Notre Dame defensive end Daelin Hayes on the Eagles 49 with 2:05 left in the quarter.

Notre Dame: The Irish avoided a letdown after their upset of the Tigers last week and continue to show they can score points in bunches and aren’t rattled by deficits. It keeps them in great position to make it to the ACC title game and qualify for the College Football Playoff.

Boston College: The Eagles had moments they can build on, much like they did when they took Clemson to the brink last month. But they were held to field goals too many times in the red zone. That is something that must change if they want to breakthrough under first year coach Jeff Hafley.