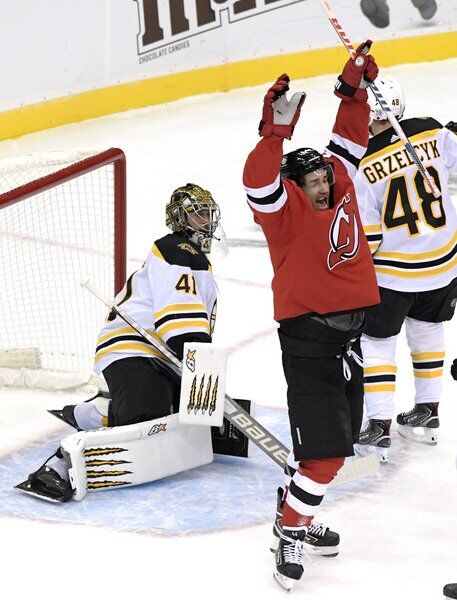 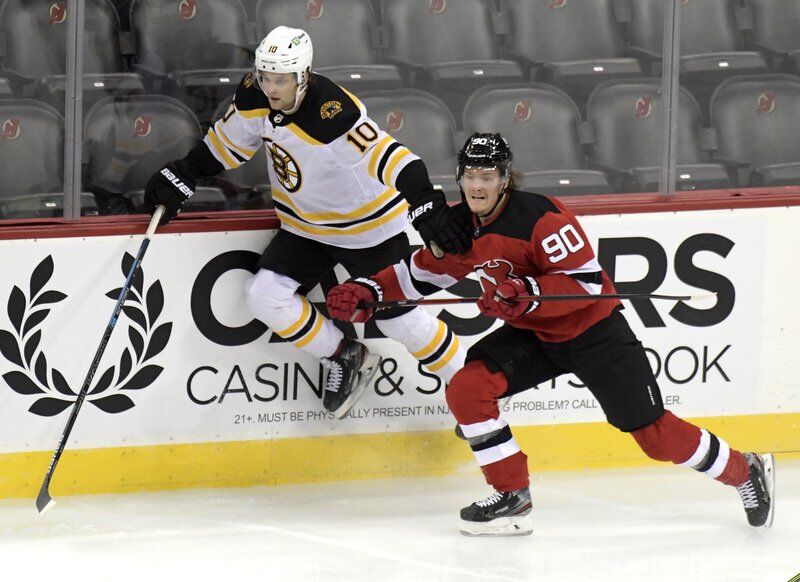 NEWARK, N.J. (AP) — Egor Sharangovich scored his first NHL goal in the final seconds of overtime to propel the New Jersey Devils to a 2-1 victory over the Boston Bruins on Saturday.

MacKenzie Blackwood made 27 saves and picked up his first victory of the season. Miles Wood also scored for the second consecutive game for New Jersey.

“You could win a lot of different ways, but I really felt it was a total 60-minute game,” Lindy Ruff said after collecting his first win as head coach of the Devils. “Everyone really played well for us."

Boston’s Patrice Bergeron scored and Jaroslav Halak made 29 saves, including two critical stops in the final minutes of the third period to force the extra session.

Devils defenseman Damon Severson beat Bruins forward Charlie Coyle to a loose puck just outside the offensive zone before he made a nifty backhand pass to set up the 22-year-old Sharangovich with 1.7 seconds remaining in overtime.

“I think it’s the best moment in my hockey career,” Sharangovich said.

Bergeron evened the score with a shorthanded goal at 17:16 of the second period. Brad Marchand won a puck battle against Devils forward Kyle Palmieri before setting up the new captain of the Bruins.

Boston appeared to tie the game shortly before Bergeron’s strike, but the game officials ruled Blackwood was unable to make a save due to incidental contact. Bruins coach Bruce Cassidy unsuccessfully challenged the play, which led to the bench minor.

Wood opened the scoring with a redirection at 16:15 of the first period. Jack Hughes maintained possession of the puck while the rest of his teammates completed a change before Ty Smith’s shot from the point was tipped past Halak.

“I thought early on, we were not fast enough, not closing hard enough to get that sustained pressure in their zone,” Bergeron said.

Wood netted his first of the season in a shootout loss Thursday. He was also penalized twice for goaltender interference in the contest, which preceded a fight with Bruins defenseman Kevin Miller 19 seconds into the game on Saturday.

Craig Smith made his debut with Boston after signing a three-year, $9.3 million contract this offseason. He missed the opener due to a lower-body injury. The 31-year-old forward played the prior nine seasons with the Nashville Predators.

The Bruins are honoring the life and legacy of Travis Roy with a commemorative TR 24 emblem on their helmets this season. Roy was paralyzed from the neck down 11 seconds into his first shift with Boston University in 1995 and created the Travis Roy Foundation to support spinal cord injury survivors in 2012. Roy passed away in October at the age of 45.