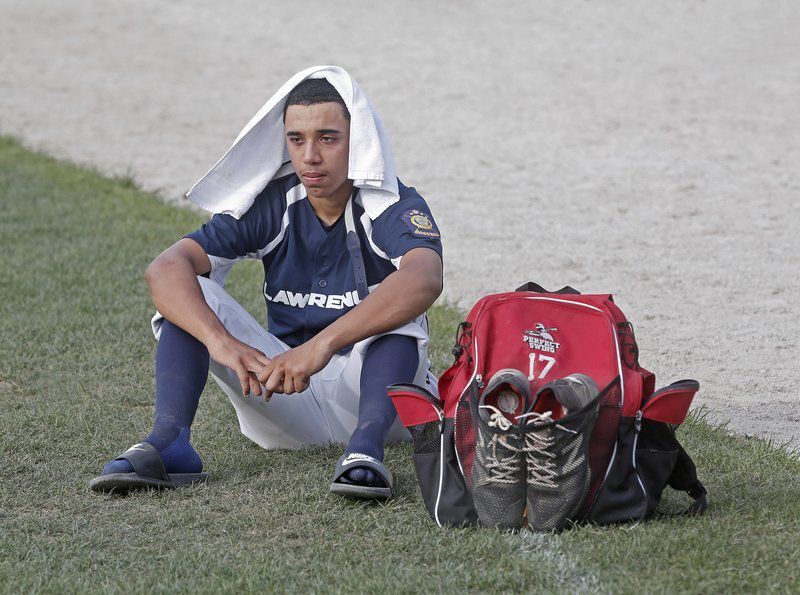 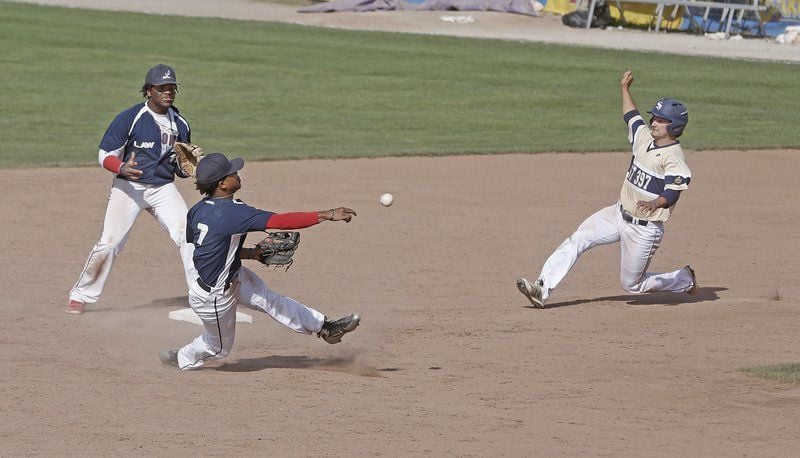 MIKE SPRINGER/Staff photoLawrence shortstop Kebler Peralta throws to first base against Shrewsbury in the Northeast Regional championship on Sunday. 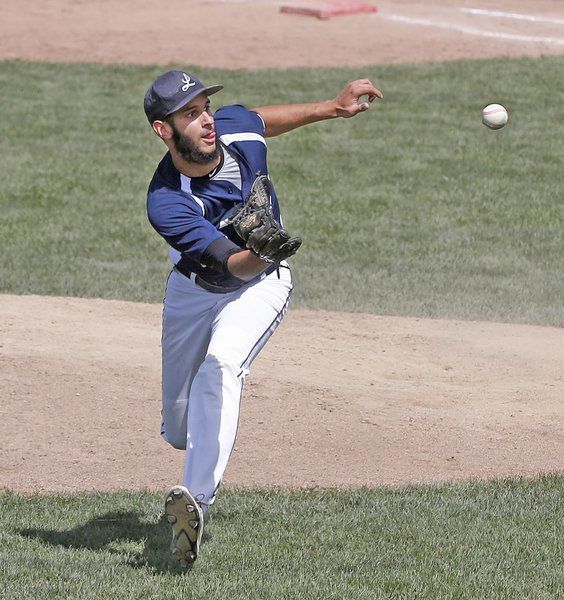 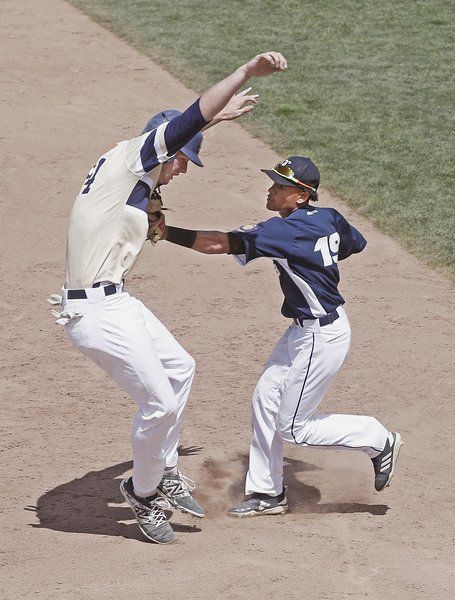 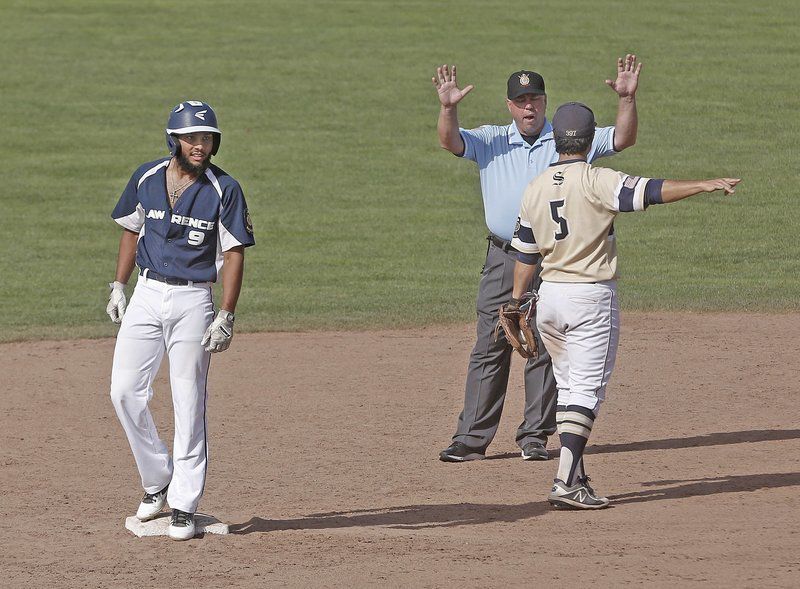 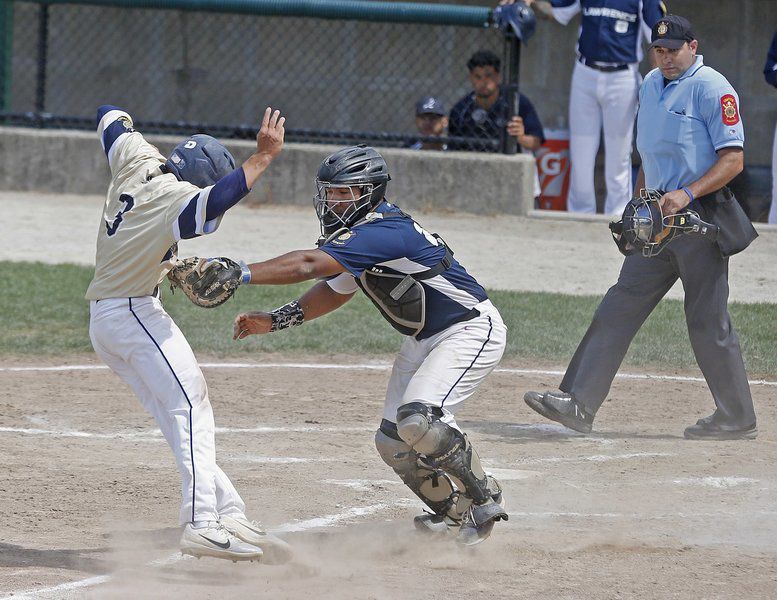 Lawrence catcher Henry Checo tags out Thomas Morgera of Shrewsbury at home plate during the Northeast Regional championship on Sunday.

MIKE SPRINGER/Staff photoLawrence shortstop Kebler Peralta throws to first base against Shrewsbury in the Northeast Regional championship on Sunday.

Lawrence catcher Henry Checo tags out Thomas Morgera of Shrewsbury at home plate during the Northeast Regional championship on Sunday.

WORCESTER — Back in early June, when the rest of District 8 was well into its American Legion schedule, Lawrence Post 15 was still looking to get started.

A long state tourney run by the town’s high school squad and rainouts kept Lawrence from settling in.

And although Post 15 always had enough players in uniforms, there was one early loss when nine players showed up. In another match, the ninth and 10th players to arrive right before game time came bearing a couple boxes of game balls.

A season that began so rough, however, ended with Lawrence five outs shy of a trip to the American Legion World Series.

After winning Game 1 on Sunday 4-3, forcing a winner-take-all Game 2 in the Legion Northeast Regional championship, Post 15 watched a 1-0 advantage disintegrate during a three-run sixth inning as Shrewsbury took the title with a 3-1 win in the decider.

This is Shrewsbury’s second trip to nationals in three years. Sunday also was the third consecutive year that two Massachusetts schools met for the regional championship. Shrewsbury and Braintree played the previous two years.

“It was a chaotic beginning,” Lawrence assistant coach Kevin Bartlett said. “High school had just gotten over, there were a couple rainouts and guys had work lined up. We knew we had 16 or 18 guys at that point, but we didn’t know what their schedules were because we were moving games around. So, we had a little rough go of it early.”

Forced to play 16 games in the final 21 days of the regular season, Lawrence still finished second, a half-game behind Haverhill with a 13-2 record. After sweeping three games in the district playoffs, Post 15 drove to Milford every night en route to winning the state tournament. Lawrence then went 4-2 in the regionals, losing only to Shrewsbury.

“We had to fight all the way through from the beginning of the season,” manager Julio Ramos said.

“It was pretty much nonstop baseball without much rest.

You have to give it to the coaching staff and the players for how they stuck together. We held on and these kids just kept moving forward as a unit.

“It takes a lot from you playing every day. I told the guys if you want to play in the major leagues, this is a major league schedule. … Hopefully, they enjoyed the experience because it was a blessing in every way, shape and form.”

SEASON COMES TO A CLOSE

Armani Paulino got the starting call for Sunday’s decisive second game. A 5-foot-6 sophomore-to-be at Lawrence, Paulino squared off against Shrewsbury’s John West, a 6-foot-8 right-hander who is headed to Boston College after he graduates next year.

Not only did Paulino match his more noted counterpart, but the youngster allowed only four hits in five scoreless innings.

“That was our secret weapon whether he knew it or not,” Bartlett said. “We had so much faith in Armani Paulino. He has a funky windup and great poise for a 16-year-old. He has a little giddy-up on his fastball, and he drops a lazy, looping curveball that no one can hit.”

But Shrewsbury (30-7) used three hits, a sacrifice bunt and a sacrifice fly to score all its run during the sixth to take a 3-1 win.

Lawrence had taken the lead in the first on a double by Anibal Pena, who was 3 for 6, a single by Bryan Guerrero and sacrifice fly by Cristian Varona.

“That team is tough,” Shrewsbury manager Frank Vaccaro said of Lawrence. “They are very green, but they don’t give an inch. They made a couple mistakes and we were able to take advantage of them. But Joe West (who allowed three hits) was good. Once he got in the zone, he started putting them down.”

Lawrence (24-5) made sure a doubleheader was needed when Miguel Matos delivered a complete-game victory in a 4-3 win in the opener.

After spotting Shrewsbury a first-inning run, Lawrence scored all four of its runs in the third.

Luis Colon took advantage of an error and Kebler Peralta reached via fielder’s choice before both were driven home on a single by Pena.

A Varona double and Henry Checo single drove in the other two runs. Matos allowed five hits with a pair of strikeouts for the win.

“We were playing on a Sunday when only 16 (Legion) teams were left in the country,” said Bartlett. “So, we can play with anybody in this country with the team we had.

With the hard work they put in and the dedication they have, they are some good ball players.”

'We are Family:' Lawrence Legion's gallant run will be remembered for years

WORCESTER — The book was almost complete.