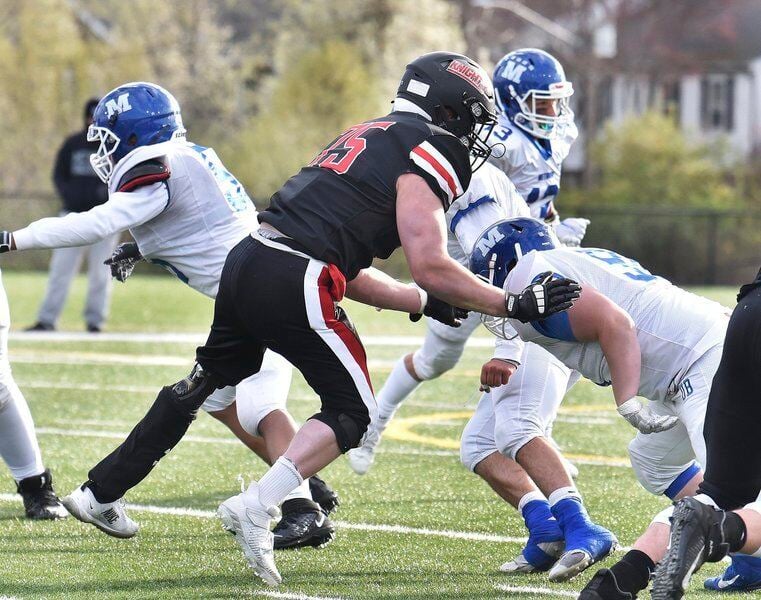 CARL RUSSO/Staff photoNorth Andover's Tommy Cox, who has a prosthetic left leg, started at defensive tackle against Methuen last week. He was in on three tackles in his first varsity game. 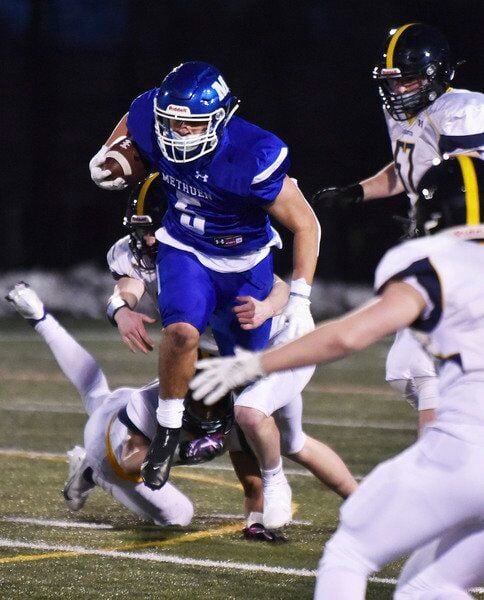 CARL RUSSO/staff photoMethuen's Anthony Romano was a force at both running back and linebacker this season. He had never played running back before this year. 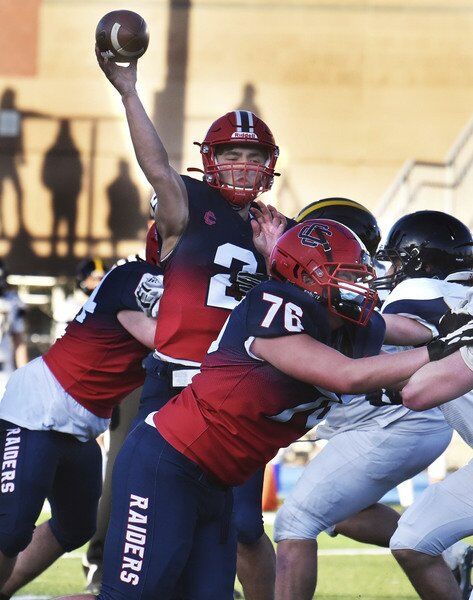 CARL RUSSO/staff photoCentral Catholic quarterback Ayden Pereira was the area's top passer for the second straight season, and he's only a junior. 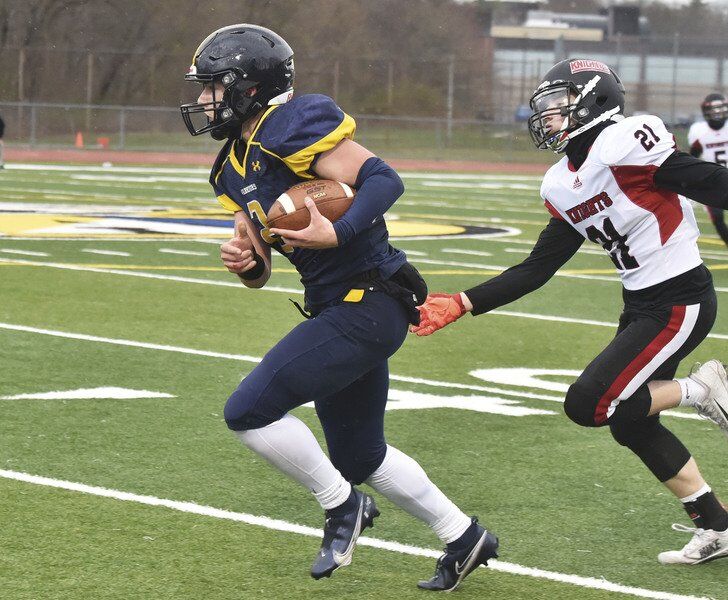 CARL RUSSO/staff photoAndover's Lincoln Beal, here running for a touchdown against North Andover, led the area in rushing and receiving yards this season.

CARL RUSSO/Staff photoNorth Andover's Tommy Cox, who has a prosthetic left leg, started at defensive tackle against Methuen last week. He was in on three tackles in his first varsity game.

CARL RUSSO/staff photoMethuen's Anthony Romano was a force at both running back and linebacker this season. He had never played running back before this year.

CARL RUSSO/staff photoCentral Catholic quarterback Ayden Pereira was the area's top passer for the second straight season, and he's only a junior.

CARL RUSSO/staff photoAndover's Lincoln Beal, here running for a touchdown against North Andover, led the area in rushing and receiving yards this season.

For so many athletes suffering through the isolation, sadness and uncertainty of the COVID-19 pandemic, when they stepped back onto the gridiron for the 2021 Massachusetts “Fall 2” season, football was more than just a game.

For North Andover senior Tommy Cox, it was also the culmination of a dream born in tragedy.

“Playing varsity football has been on my mind since I lost my leg when I was 10-years-old,” said Cox. “While I was in the hospital, the North Andover 2013 varsity team sent me a picture of the team which they all had signed and my own varsity jersey. From that moment on, I wanted to be just like those guys, even if it seemed impossible.”

In 2013, Cox’s left leg had to be amputated following a boat accident.

Last Thursday, equipped with a prosthetic leg, Cox fulfilled his dream of playing varsity football for the first time, starting and playing the entire game at defensive tackle against Methuen.

“I dreamed of this moment for over seven years,” said Cox, also an accomplished wrestler. “It showed me that there is no challenge in life that’s too big. After my accident, my body was in very bad shape. I was lucky to be alive. I wasn’t even sure I would ever be able to walk again.

“Due to the extremity of my injuries, doctors were unsure whether a prosthetic leg could work for me. At the time the idea of playing football seemed impossible. To get to this point, I faced an immense battle with doubt, and being told what I could not do. I hope I showed people that there is no such thing as impossible.”

Cox not only played, he was in on three tackles against Methuen.

“Tommy is an inspiration to every member of our program,” said North Andover coach John Dubzinski. “Tommy is a reminder that anything can be achieved and nothing is impossible. Most, if not all, people would throw in the towel if given Tommy’s situation. Tommy has relentless determination. It has been an absolute honor and privilege to coach Tommy for four years.”

Cox’s incredible day wasn’t the only highlight from Fall 2.

1. Win of the Year — Facing a fourth-and-goal in overtime, Methuen’s Anthony Romano barreled through a defender and plowed into the end zone for the game-winning 1-yard touchdown in the Rangers’ 21-14 victory over Andover. It was Romano’s third touchdown of the day.

2. Performance of the Year, Offense — Central Catholic quarterback Ayden Pereira ran for a season-high 137 yards on just eight carries and threw two touchdowns as the Raiders finished off their perfect season with a 30-14 win over Tewksbury.

3. Performance of the Year, Defense — Andover senior first-year starter Zayn Aruri picked off a pass at the Golden Warriors’ 5-yard line and seemed to weave through all 11 North Andover defenders as he sprinted 95 yards for a touchdown. It was his second interception of the game and fifth of the season.

5. Wildest Sequence — First, Central Catholic linebacker Tommy Casey scooped up a fumble and ran it in for a 45-year touchdown. Then, on Methuen’s next drive, Central’s Nick Palmer intercepted a pass and ran it 34 yards for a TD. Raiders coach Chuck Adamopoulos said he had never seen defensive touchdowns on two straight possessions.

6. Most Emotional Moment — Colby Laursen-Rice led protests that helped overturn Whittier’s decision to cancel the football season. Laursen-Rice said he suffered with depression while isolated during the COVID-19 lockdown. So when the lineman finally returned to the field, he said it felt like a blessing from God.

Many have also called Pereira the best quarterback in Massachusetts.

For the second straight season, All-Scholastic junior Pereira led The Eagle-Tribune area in passing, throwing for 984 yards and 12 touchdowns. He was also sixth in the area in rushing (48-421, 4 TDs).

What makes Pereira’s stats more amazing is that he accumulated them almost entirely in the first half of games. He was mostly either handing off or on the sidelines after halftime, with Central well ahead of every opponent.

The Central Catholic offense should be very dangerous next year, returning both Pereira and his top target, Preston Zinter (20 catches, 409 yards, 4 TDs).

Methuen’s Anthony Romano was already an Eagle-Tribune All-Star linebacker. But when the Rangers lost their top running back to injury before the season, Romano — who had just one career varsity carry heading into the season — stepped up.

Romano finished the season with 138 carries for 638 yards and an area-leading 12 touchdowns. That included four 100-yard rushing games.

The Rangers may have unveiled their next star last week. Sophomore QB Xander Silva rushed for 148 yards, including a 54-yard touchdown, on just 16 carries in his first serious varsity action.

“Xander was incredible!” commented Romano after the win over North Andover.

Andover coach EJ Perry commented that he feels his sophomore running back Lincoln Beal is as talented as any back in the state. The stats back up Perry’s assessment.

If they stay together, Beal and classmate Scotty Brown (730 passing yards, 448 rushing yards) will continue to be a dangerous duo.

FROM SOCCER TO FOOTBALL

Andover senior Anthony Previte was already an Eagle-Tribune All-Star soccer midfielder. But when football was moved to “Fall 2,” Previte decided to take on the gridiron.

“I had played football casually for fun, but I had never played an actual football game,” he said. “Coach (EJ) Perry was my fifth grade teacher, and had always told me I should play. This was my opportunity.”

Previte earned a varsity job at defensive back, and made an interception and 13 tackles for the season.

“It was an amazing experience,” said Previte. “It’s a very physically tough sport, but I still had a lot of fun.”