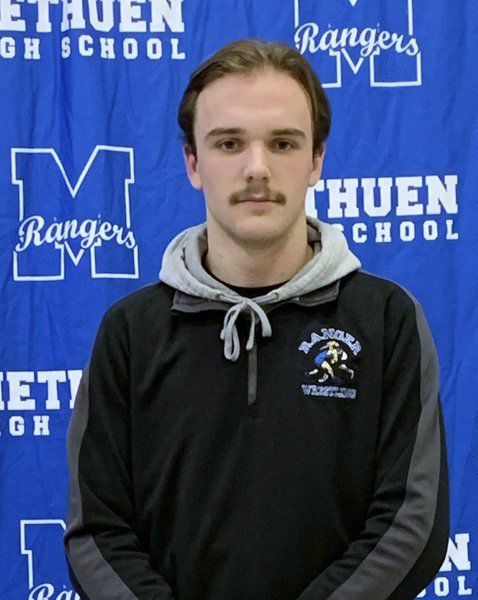 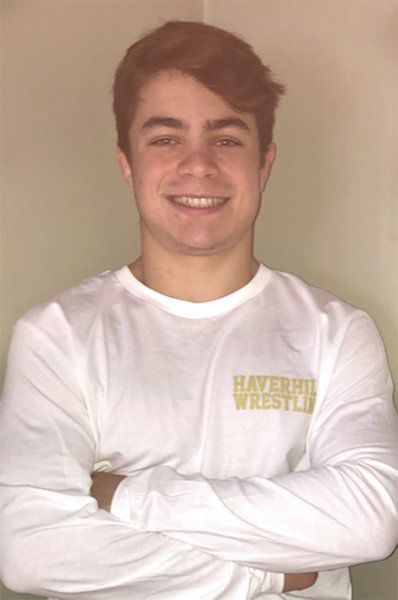 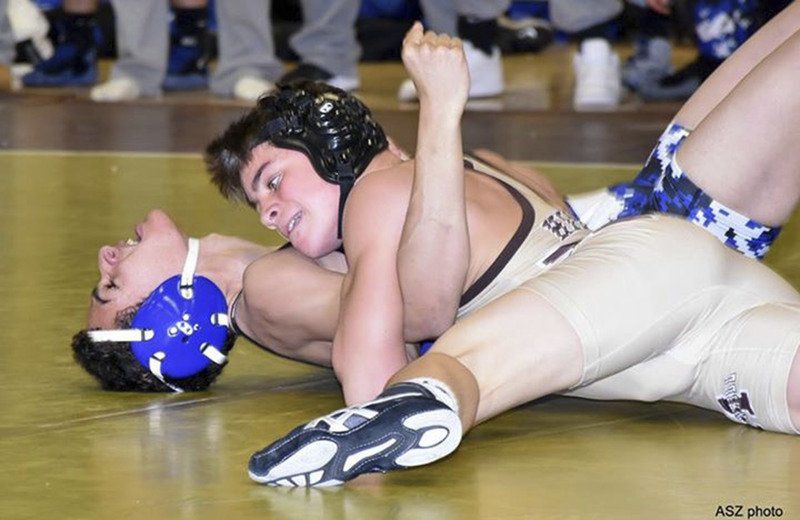 Photo courtesy of Art ZainoHaverhill's Jake Nicolosi, going for a pin against Methuen last year, is expected back in action Wednesday after missing three weeks with a knee injury. 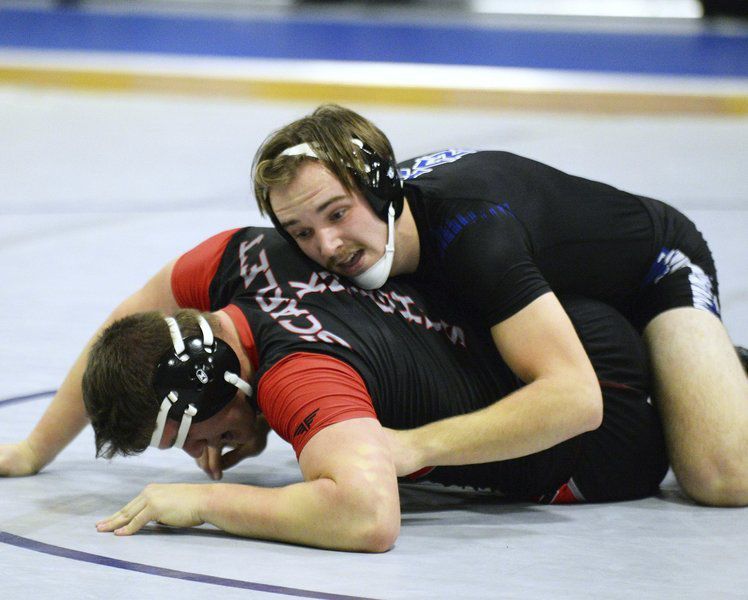 CARL RUSSO/Staff photoMethuen's CJ Brown is in control of North Andover's Tommy Cox in last week's dual meet. He won by pin for his 17th pin and improved hid recprd to 19-0. 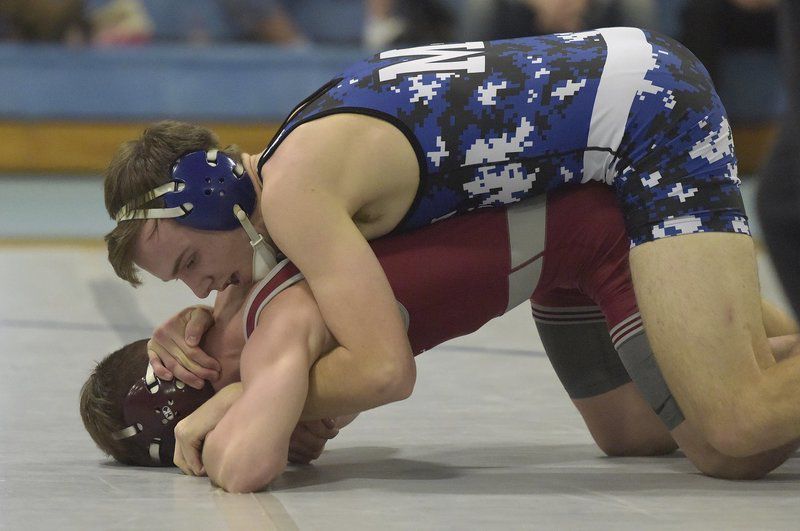 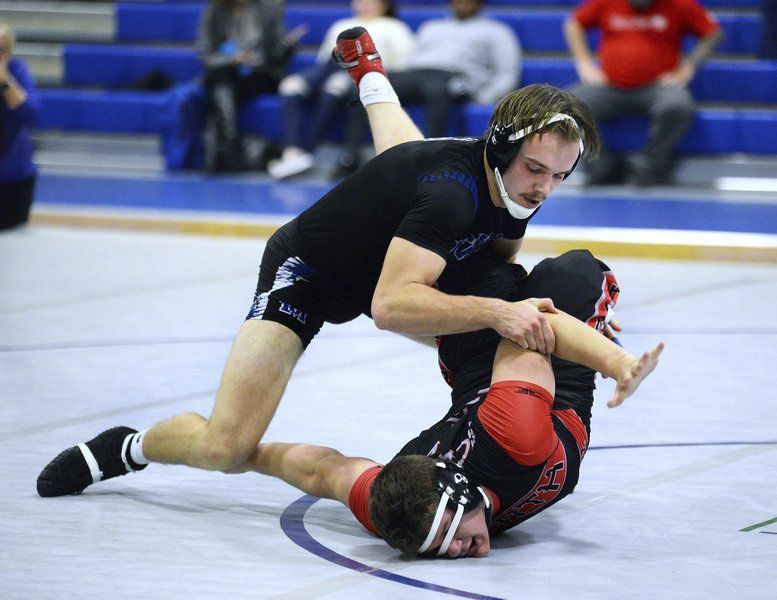 Photo courtesy of Art ZainoHaverhill's Jake Nicolosi, going for a pin against Methuen last year, is expected back in action Wednesday after missing three weeks with a knee injury.

CARL RUSSO/Staff photoMethuen's CJ Brown is in control of North Andover's Tommy Cox in last week's dual meet. He won by pin for his 17th pin and improved hid recprd to 19-0.

A solid wrestler for the Rangers last year during their terrific 22-2 season, Brown surprised himself by having a great postseason, finishing fourth at the Division 1 state meet.

That finish injected new energy and new enthusiasm into his love of wrestling, and may just have an impact on his future.

“I realized I could wrestle with those (good) kids and it gave me a lot of confidence,” said Brown, who had an overall record of 36-15 as a junior. “It made me work harder in the offseason. I wanted to build off how I finished the season.”

Thus far, the offseason work — which included occasional trips to Smitty’s Barn in Kingston, N.H. — seems to be paying off big time. Through 22 matches, he’s undefeated with 20 pins, a tech. fall and major decision and is the top-ranked 170-pounder in this week’s first edition of Kings of the Ring.

“I feel I’ve gotten a lot better at takedowns and definitely on top,” said Brown. “Last year, I had some trouble with my shots, but the Sughrues (assistants John, Kevin and Paul) have worked with me and I’m feeling good about it now.”

Brown’s increased confidence and resulting prowess on the mat has him rethinking his future a bit. Originally, he had no plans on wrestling in college and the three schools to which he’s already been accepted (Merrimack, SNHU and St. Anselm) don’t even offer wrestling.

“I wasn’t considering it before but, after this year, I might want to continue wrestling,” said Brown, who plans on majoring in Business Administration.

But first things first. He’s intent on helping the younger Rangers develop so that Methuen’s winning tradition will continue, and he’s striving to reach his own personal goals.

“I definitely try to show the younger guys how to work in the (wrestling) room and how to carry it over to the mat,” said Brown, who has been wrestling since the fifth grade. “I try to show them the right way to do things, just like when I was a freshman I learned from guys like Travis Manick, Dan O’Connell and the Abdallah brothers (Travis and Trevor).”

As for his own goals for the season, Brown is aiming “for the best record I can get, win sectional and place high at state.”

Taking it a step further, at the rate he’s going maybe, just maybe he can give the home fans something to cheer about in March when Methuen hosts the New England Tournament.

After this weekend, there can be no doubt that our area has the top 138-pounders in New England. It starts with unbeaten Central Catholic senior Mike Glynn, who was third in New England last year, but it just got tougher with Timberlane junior Nick Pallaria dropping down to that weight. And then there is Salem’s George Boudreau and St. John’s Prep freshman Rawson Iwanicki of Andover.

Pallaria and Boudreau were both named Outstanding Wrestlers at weekend tournaments, and one local coach who saw Iwanicki at the West Springfield Duals said “he looks like a state champion to me.”

Another interesting weight class is 145, where unbeaten John Vasquez of Lawrence is ranked No. 1, but it includes Haverhill standout Jake Nicolosi, who is returning to the mat this week after rehabbing for three weeks, and up-and-coming Jonathan Davila of Andover. Nicolosi and Davila could meet in Wednesday’s dual meet in Haverhill.

Finally, while Central Catholic sophomore Jimmy Glynn certainly deserves to be on top of today’s first Kings of the Ring at 106, it’s a strong weight with Lawrence’s Luis Mauricio, Salem’s Ryan O’Rourke and Windham’s Aidan Williams.

Two area wrestlers who got little attention in the preseason, Andover Elias Maita and Central Catholic’s Anthony Mears are starting to be noticed big time. The unbeaten Maita is currently ranked fourth in the state at 160 pounds and will ultimately need to face No. 2-ranked Achilles Gikas of St. John’s Prep, while Mears was most recently ranked second at 220, but he defeated top-ranked Naziah Armor of Brockton over the weekend.

In team rankings, Central Catholic is currently the third-ranked team in the state behind Springfield Central and St. John’s Prep.