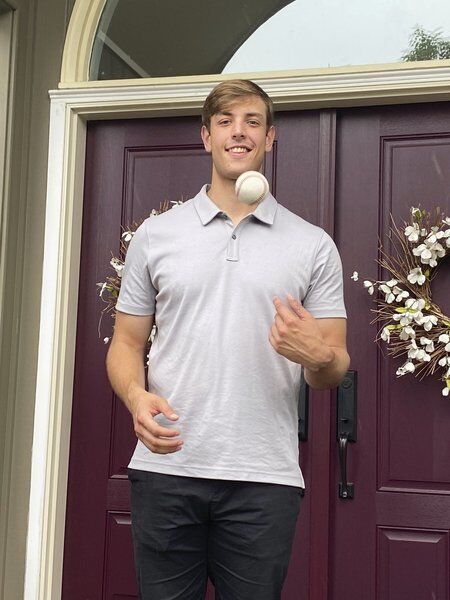 Courtesy photoSteven Hajjar is a happy guy as he stands in front of his North Andover home shortly after his name was announced as the 61st pick overall by the Minnesota Twins. 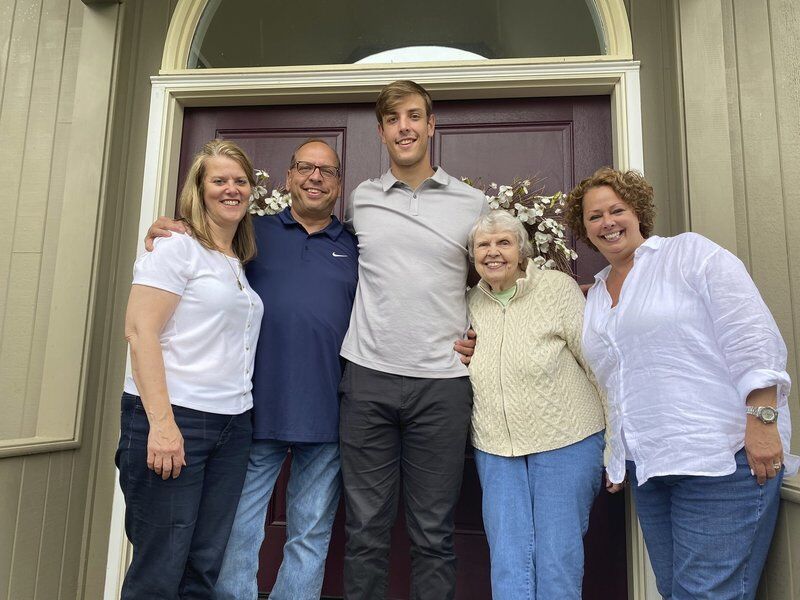 Courtesy photoSteven Hajjar, in the middle, is surrounded by family after being drafted by the Minnesota Twins on Monday in the second round. From left to right are his mother Linda, father Scott, Hajjar, his grandmother Gladys Hajjar and aunt Sue Hajjar. 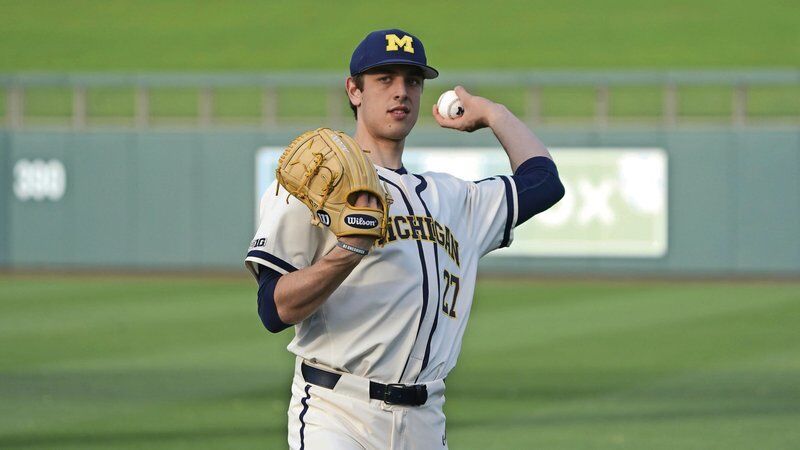 AP Photo/Rick ScuteriSteven Hajjar warms up last year during a game against Vanderbilt. 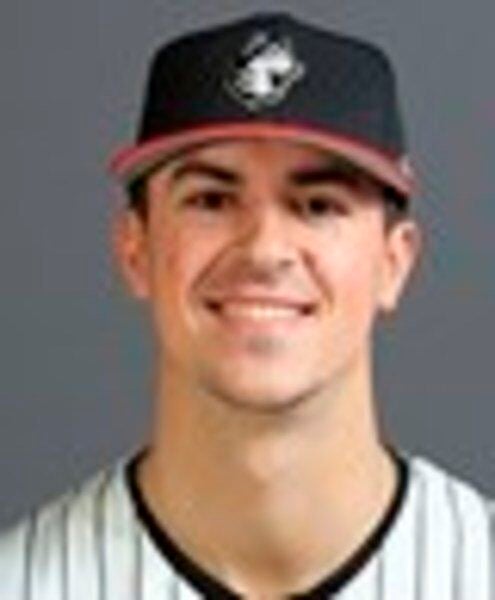 Courtesy photoSteven Hajjar is a happy guy as he stands in front of his North Andover home shortly after his name was announced as the 61st pick overall by the Minnesota Twins.

Courtesy photoSteven Hajjar, in the middle, is surrounded by family after being drafted by the Minnesota Twins on Monday in the second round. From left to right are his mother Linda, father Scott, Hajjar, his grandmother Gladys Hajjar and aunt Sue Hajjar.

AP Photo/Rick ScuteriSteven Hajjar warms up last year during a game against Vanderbilt.

NORTH ANDOVER – Steven Hajjar was hell-bent on going to the University of Michigan to play baseball for head coach Erik Bakich.

So he basically priced himself out of getting drafted in high school.

He told all of the major league teams coming out of Central Catholic High interested in his services, that he wanted seven figures ... plus.

While he was drafted in the 21st round by the Milwaukee Brewers, which was nice to celebrate, the Brewers were out of big-time bonus money by then.

Well, after three years, the University of Michigan red-shirt sophomore wanted a similar bonus check to give up his college eligibility and several teams were calling, eventually the Minnesota Twins with their second round pick at No. 61.

“This is my dream,” said Hajjar, who turns 21 on Aug. 6. “I realized early in high school, when I started to get looks from colleges and scouts, that baseball was my sport. I am all-in when it comes to baseball. This is my passion.”

Just because he got his wish doesn’t mean it didn’t come with some stress. In fact, there was a lot of stress on the second day of the MLB Draft.

Hajjar said he thought he was going to be chosen at one point earlier in the second round, but that team opted to choose another guy.

About 30 seconds after he told his dad he might be headed back to Michigan, which wouldn’t have been a bad option, plans changed.

“I was in another room talking to my advisor and he said something about the Pirates selecting me in the third round,” recalled Hajjar.

“The next thing you know, my advisor says, ‘What a minute.’ And all of sudden I hear my family and friends in the other room screaming,” said Hajjar. “I ran in the room and saw my name on the TV screen. It was wild.”

Welcome to the MLB Draft day.

“It was easily the most stressful day of my life,” said Hajjar. “I can’t explain it. It was an absolute rollercoaster … But it ended up being the best day of my life.”

Hajjar recently completed three years of college and only one full year of baseball due to a freak pickup basketball injury to his knee and the COVID-19 shortened season in 2020.

Only 20, heading back to school was on option. Michigan is considered one of the top 15 programs in the country and the instruction he received as a pitcher and player was “through the roof.”

His goal, though, was to get drafted and get paid. Basically, to be in position to let the MLB teams decide if he should go back to college.

Hajjar was expected to be a late-first-rounder to second-round pick, which meant seven figures. Basically, that’s what it would take for him to leave Michigan.

“I have a lot of people to thank for helping make this happen,” said Hajjar. “This has been a long journey. I couldn’t have done it without their help. Also my family, especially my parents. They gave up a lot for me to do this. I’m so glad to share with so many people.”

Hajjar is expecting to come to an agreement with the Twins and meet with some of the organization’s management. The Twins’ spring training facility is in Fort Myers, Fla., only five miles from the Red Sox JetBlue facility.

“I loved Michigan. It was the best time of my life,” said Hajjar. “For me to give that up it would have to be worth it. And being drafted in the second round, and playing for the Twins ... that’s worth it.”

by Angels in 16th round

There was a little gap from when Steven Hajjar was drafted early on Day 2 to when two other area baseball talents were selected by major league teams.

Neither was a surprise, though Keegan immediately announced that he was going back to Vanderbilt University for his red-shirt junior season. Keegan was originally slated to be selected between the fourth and sixth rounds.

Dufault was another story altogether. A year ago, when the MLB Draft was only five rounds, the Red Sox tried to get the Northeastern University star reliever on the cheap, for $20,000, the maximum that could be offered to “free agents.” He turned it down and decided to return to Northeastern for his red-shirt junior year.

He’s glad he did.

Northeastern not only won its first Colonial Athletic Association regular season and tournament, but it made the NCAA Div. 1 tourney. Dufault was on the 2018 team that also played in the NCAA tournament.

“I’m so glad I went back,” said Dufault, whose fastball has hit 97 mph while regularly being in the low-to-mid 90s. “We had a great year together and I’ll never forget that.”

While Dufault didn’t have a big year statistically -- 2-4, 3.79 ERA, with 16 relief appearances -- he did average over one strikeout per inning (22 in 17.1 innings), his arm is still considered electric with a mid-90 mph fast ball and very good slider.

“It was a stressful day, but to say I feel really good is a bit of an understatement,” said Dufault, whose parents and grandparents were all present for the announcement on TV. “This has been a dream of mine as long as I started focusing on baseball as my number one sport.”

Dufault expects to finalize the bonus money and then take off for the Angels training facility in Tempe, Az.

“I’m just excited to get going,” said Dufault, who is 6-fot-5 and 200 pounds. “It’s exciting to know I’ll be getting professional coaching, where they hopefully can get a few more miles per hour on my fastball, and professional trainers, who can add some strength and pounds to my skinny body.”