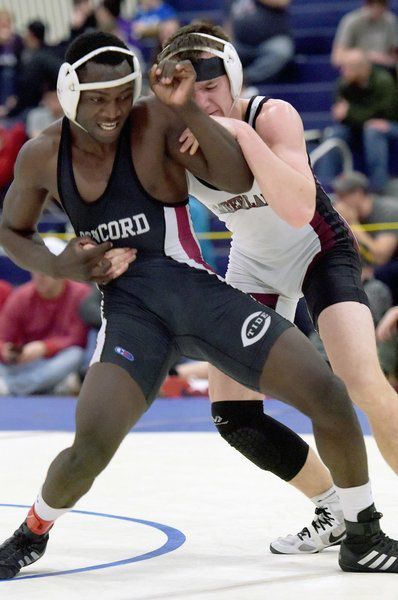 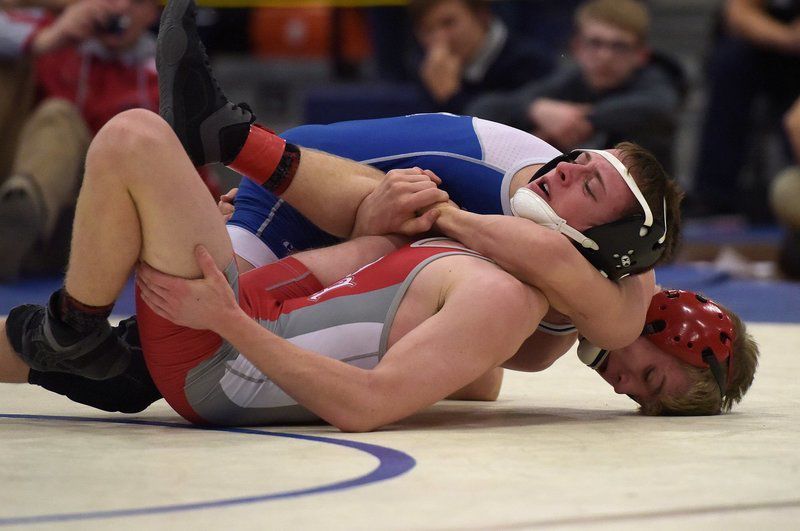 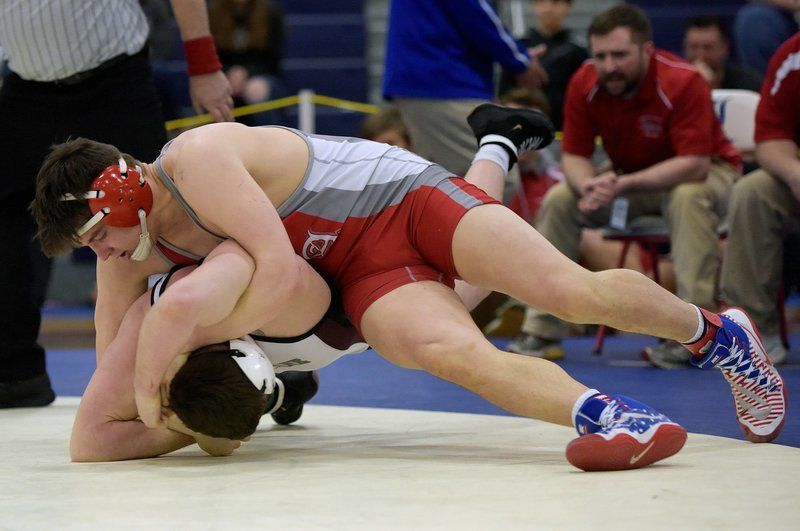 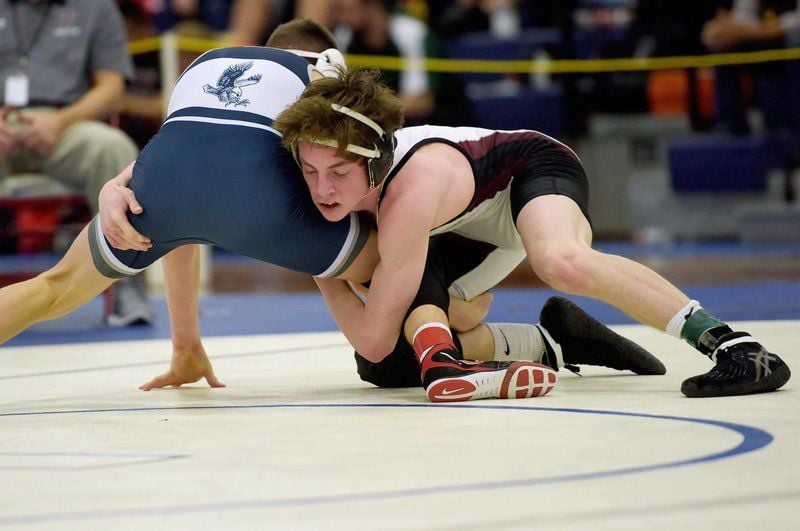 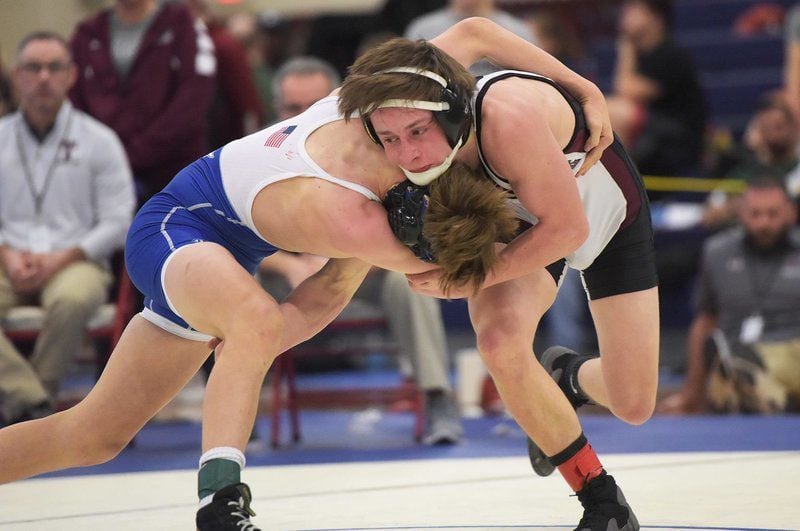 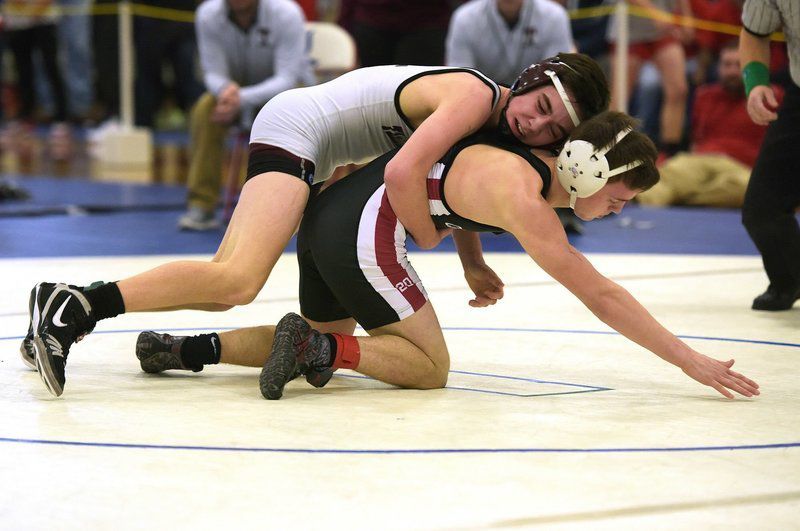 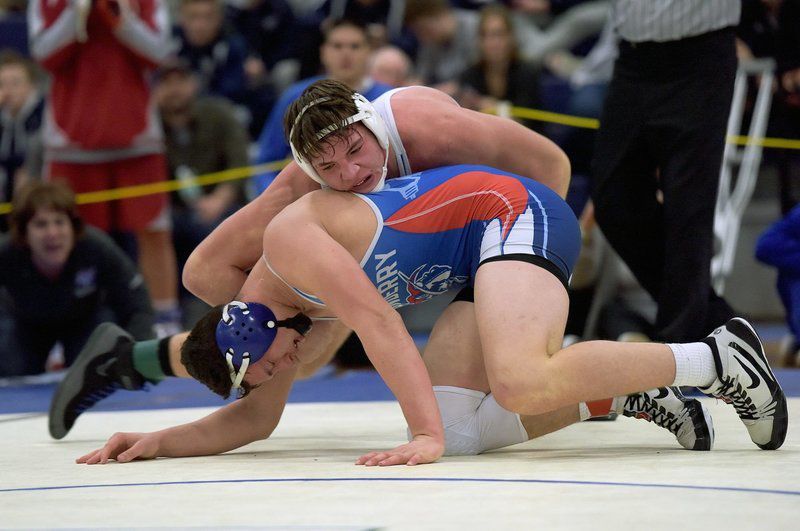 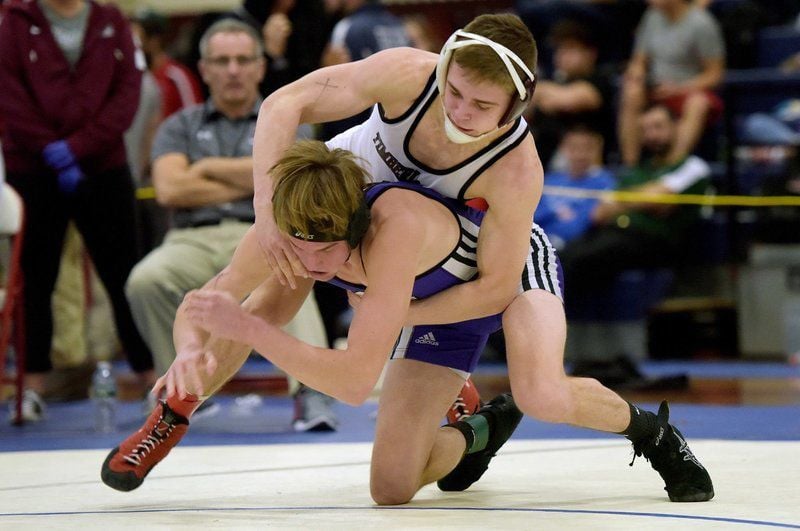 TIM JEAN/Staff photo Timberlan's Connor McGonagle, top, is in control of Nashua South's Jeremy Bridge in the 132-pound final before recording his third pin of the day and third straight Division 1 title.

TIM JEAN/Staff photo Timberlan's Connor McGonagle, top, is in control of Nashua South's Jeremy Bridge in the 132-pound final before recording his third pin of the day and third straight Division 1 title.

LONDONDERRY — Step One wasn’t flawless by any means, but it was certainly successful for the Timberlane wrestling team Saturday afternoon.

The Owls captured the Division 1 state title for the third straight year and 17th time in 18 years in convincing fashion, piling up 254.5 points, 62 more than runner-up Concord, Salem was a solid third with 142 points, three more than Pinkerton.

Timberlane crowned three champions, had five runners-up and qualified all 14 wrestlers for next Saturday’s Meet of Champions at Nashua South. That last point was probably most important for Timberlane coach Barry Chooljian.

“That’s what we were shooting for so it was mission accomplished,” said Chooljian. “We probably should have won one other weight class but the kids wrestled hard. I’m proud of them.

Timberlane’s three champions were impressive. Barret Kappler had three straight wins at 120, including an 11-3 major decision in the finals, to improve to 32-5 on the year, defending New England champ Connor McGonagle had three pins at 132 and is now 40-1 and Justin Berube had two pins and an 11-5 decision to take first at 152.

Berube, who is now 34-5 on the year, started the season as a 160-pounder but dropped to 152 to win his first state title and is glad he did.

“Coach (Chooljian) thought it’d be best for the team and it’s worked out really well,” he said. “I feel stronger and really good. My goal is to make the New England finals and for the team to win it, and I think my chances are pretty good.”

But, warns Berube, winning steps two and three, the Meet of Champions and New England, is no easy thing.

“We wrestled well today but things can go wrong at states and New England and you have to be ready for anything,” he said.

Chooljian certainly seconds that sentiment but said of Berube that “he’s wrestling great. What I liked about him today was that he kept wrestling offensively the whole match.”

Heavyweight Noah Beaulieu, meanwhile, fell in the category of “being ready for anything.” After recovering from a shoulder injury, Beaulieu got a vicious case of the stomach flu during the week and barely was able to wrestle Saturday. But he won two matches before defaulting in the finals due to the illness.

“We weren’t even sure he could wrestle today but Noah really dealt with the adversity,” said Chooljian.

Notable third-place finishes were by John Leavitt (113), Dylan Musgrave (145) and Chris Lund (220). Musgrave and the steadily improving Lund had pins in the consolation finals.

Things couldn’t have gone much better for Salem, which had its best finish in years.

Sophomore Matt Adams started things off with a pin in the finals at 113 to improve to 35-5 on the year, junior Tristen Cabinta won his third straight D1 title with a 9-5 decision at 160 to improve to 37-4 and sophomore Beau Dillon pulled out an exciting 11-8 decision in the finals over Londonderry’s tough Alex Boucher. He is now 34-7 for the season.

To top it off, Salem co-coaches Nick Eddy and Wes Decker were named Division 1 Coach of the Year.

Pinkerton sophomore 182-pounder Sterling McLaughlin just keeps getting better and better. After recording two pins in the quarterfinals and semifinals, he dominated Tremblay, who was fourth in New England last year. Leading 7-1 after two periods, McLaughlin got a near fall and then a pin with 20 seconds left in the match, improving his record to 34-2.

Also for Pinkerton, Robbie Fahey was second at 220, falling to old rival Alex Buteau of Concord 1-0 in the finals, and Walker Stinson was runner-up at 113.

Windham coach Tom Darrin knew that it would take a team effort for the Jaguars to repeat as Division 2 state champions and that’s exactly what he got.

The Jaguars showed more depth than at any time this year and finished with 198 points to edge runner-up Merrimack by six points with Bishop Guertin (186) not far behind in third.

“It was the ultimate team win,” said Darrin. “Every wrestler won at least one match and every wrestler placed in the top six. In 43 years of coaching, that is the first time in any tournament that my team has done that.”

Trailing by four points going into the medal round, Windham won nine of 14 matches to claim the title.

Placing first for Windham were Conner Sills at 106, Riley Millette at 120 and Vinny Marino at 132. It was the third divisional state title for Millette and second for Marino.