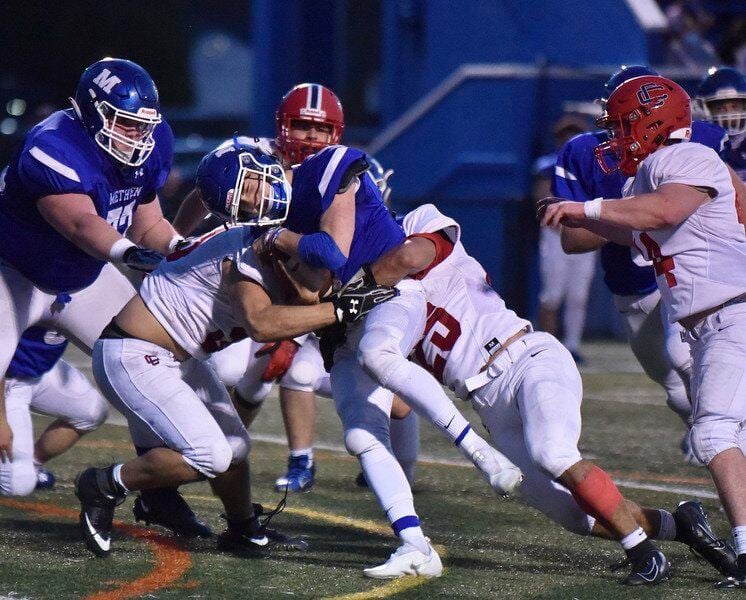 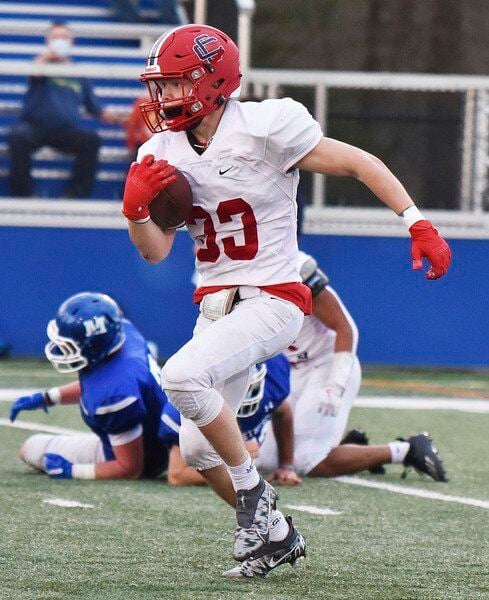 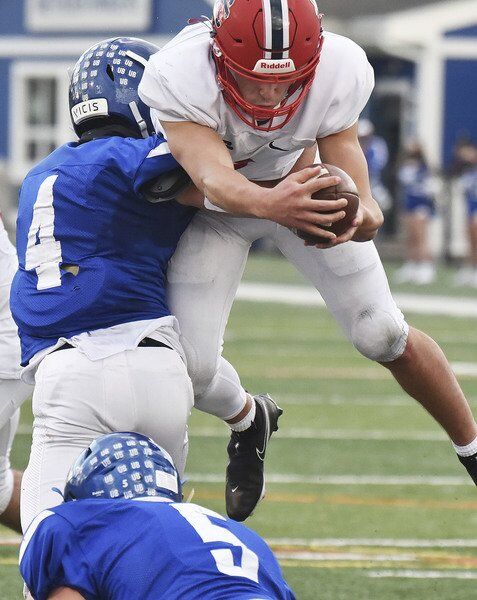 CARL RUSSO/staff photoDespite the effort of Methuen's JP Muniz, Central Catholic quarterback Ayden Pereira forces his way over the goal line to score the second touchdown on Friday. The Raiders bested the Rangers 35-7. 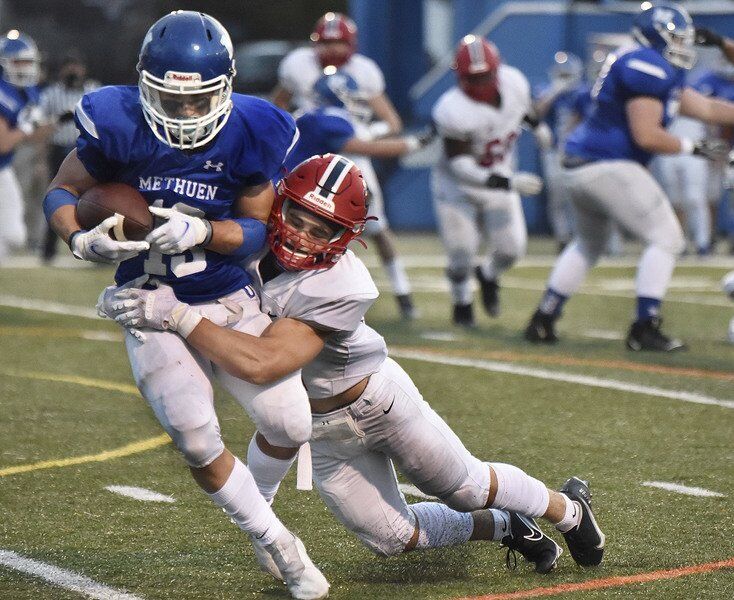 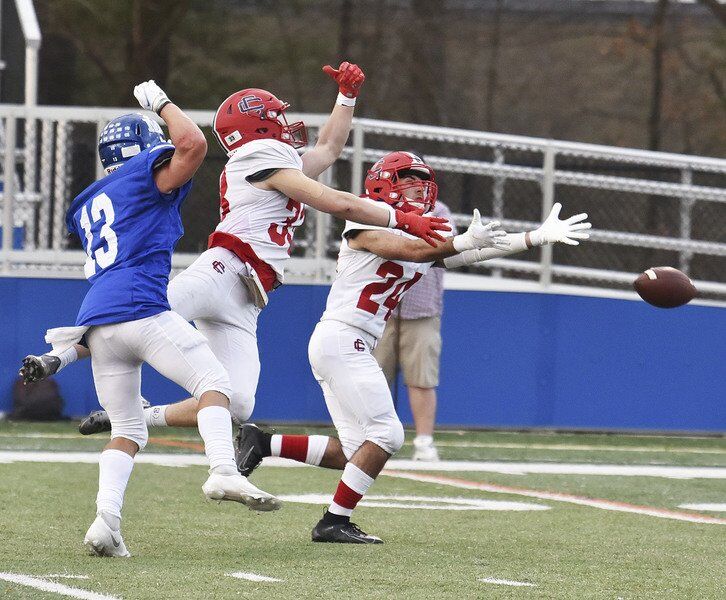 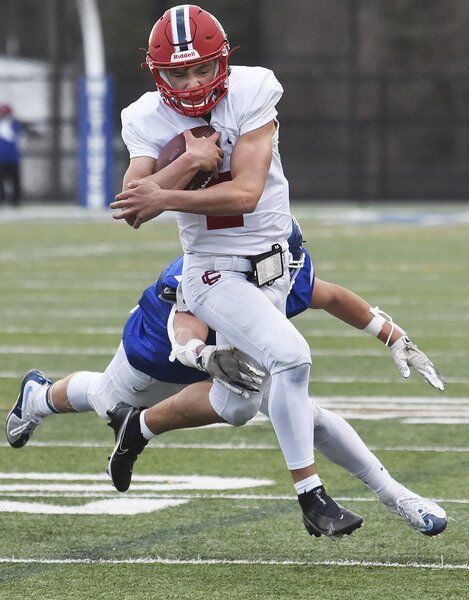 CARL RUSSO/staff photoDespite the effort of Methuen's JP Muniz, Central Catholic quarterback Ayden Pereira forces his way over the goal line to score the second touchdown on Friday. The Raiders bested the Rangers 35-7.

METHUEN — As Central Catholic's Tommy Casey scooped up the fumble and broke toward the end zone, the linebacker couldn't help but listen for footsteps

"Preston (Zinter) hit the QB, and the ball took a perfect bounce into my hands," Casey remembered. "From there, all I could see was end zone. I felt a few guys on my back, so I wasn't sure I would get in, but I sure wanted to."

Casey's fumble return for a touchdown — the first of two defensive scores on back-to-back possessions — highlighted a dominant defensive performance, and the Central Catholic offense scored on all three first half possessions on the way to a 35-7 victory over Methuen on Friday night.

Central improved to 3-0, besting a Rangers (2-1) squad that had opened the season with two big victories.

"The intensity was crazy because we wanted to beat our rival on their senior night," said Casey. "Everyone had so much energy. We were confident, but we knew they were playing well."

Central wasting no time taking control. The Raiders opened the game with a 14-play drive — twice converting on fourth down — and took the lead on a 1-yard Matthias Latham touchdown run. After forcing a three-and-out, Central added to the advantage when Pereira powered in for a 1-yard score.

The Raiders made it 21-0 with 1:52 until halftime. Pereira escaped a sack, then found Nathel Achuo wide open in the flat, and the running back waltzed into the end zone.

"We were grinding out tough yards, and took our shots when we needed to," said Pereira, who finished 11-of-16 passing for 93 yards, playing just one possession after halftime. "We picked up their blitzes, and our guys broke some tackles."

The Central defense then locked down the win in a bizarre sequence of plays.

On the first possession of the second half, Zinter caused the fumble that Casey ran in for a touchdown. Then, just two plays into Methuen's next possession, Central's Nick Palmer intercepted a pass and ran it in for a 34-yard touchdown.

"To come out and start the second half on two defensive touchdowns on three plays, I've been coaching 37 years at this school and I don't think I've ever seen that happen," said Central coach Chuck Adamopoulos. "This is a good win. Methuen is a good football team. The score was misleading. Our offense controlled things in the first half, and I'm proud of how our defense performed."

Central surrendered just 93 yards through three quarters, before the starters left the game. The Raiders were led by Casey (8 tackles) and Mark Ciccarelli (6 tackles), while Michael Brown, Lucas Viana and Owen Bufagna each had a sack.

Methuen broke up the shutout in the fourth quarter. Rangers QB Joe Gangi completed a pair of passes to Jason Silverio, setting up an Anthony Romano 1-yard touchdown. Romano also made 12 tackles.

"Defensively we played very well," said Rangers coach Tom Ryan. "Defensively, we feel like we can play with anyone. We just need to find a way to get it going and find consistency on offense."