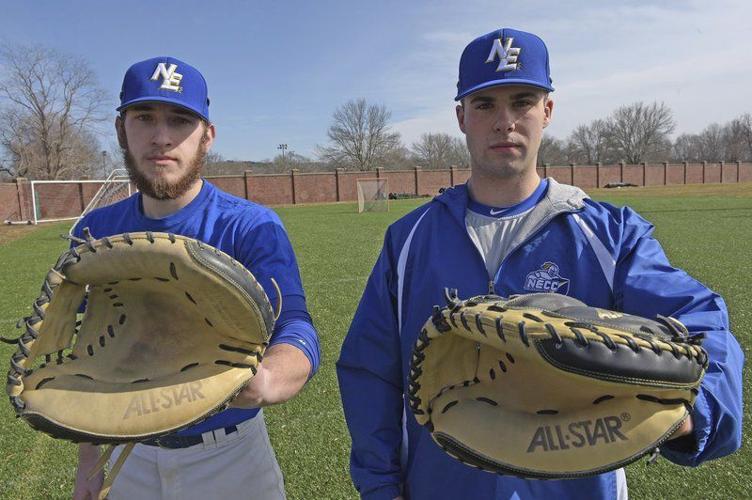 TIM JEAN/Staff photoRiley Magee, left, of Windham, and Robert Lagasse, of Newburyport, give Northern Essex catching depth. They both were hot at the plate as the Knights opened their season Wednesday with a doubleheader sweep. 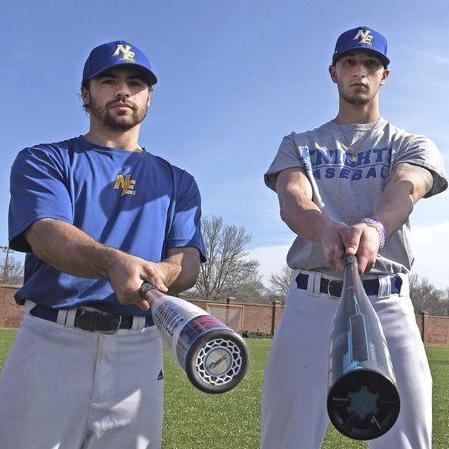 TIM JEAN/Staff photoRiley Magee, left, of Windham, and Robert Lagasse, of Newburyport, give Northern Essex catching depth. They both were hot at the plate as the Knights opened their season Wednesday with a doubleheader sweep.

HAVERHILL — Heavy turnover is a fact of life in junior college athletics.

Usually, at least half the team leaves every year, making it difficult to build a consistent winning program, much less a dynasty.

Apparently, however, this hasn’t registered with Northern Essex Community College baseball coach Jeff Mejia, who believes he has put together another strong team in his sixth year as head coach.

In his first five years, Mejia’s club won four regional titles and advanced to the Division 3 World Series. Last year’s Knights, who finished 25-12-1, were about to make it five straight before an altercation on the field prohibited them from making it five straight regional crowns.

From last year’s team, seven of the top nine hitters are gone and two of the top three hitters. Joining eight returning players from last year are a whopping 20 newcomers, either freshmen or transfers. This doesn’t faze Mejia, however.

“Two years ago, we had a younger team and we went to the finals (of the College World Series),” said Mejia, who has a fine 116-62-1 record in five years despite playing a tough schedule. “We’ve got some great talent in this freshman class.”

What’s more, while there aren’t a lot of returnees, the team’s best hitter and best pitcher are among them. Shortstop Ryan Collins from Peabody hit .458 last year with five home runs and 46 RBIs while Corey Imbriano had a 6-1 record on the mound with a 1.67 ERA.

“Corey had the best year of any freshman pitcher I’ve had and that includes Ryan McAuliffe, who is with the Mets organization now,” said Mejia. “We’re expecting another big year from him.”

Beyond Imbriano, there is no certainty among the starting pitchers. Top candidates to join the rotation include North Reading’s Justin Kerhulas, who was a standout at St. John’s Prep before heading to St. Anselm, Wakefield’s Jake Berresi and Amesbury lefty Richard Reidy, who attended Penn State last year.

Other candidates are freshmen Vidal Dominguez, John Alba and Alvin Noberto and sophomore Joan Cordero, all from Lawrence, as well as sophomore Nicholas Musto from Londonderry and Devin Carvalho from North Andover.

Offensively, there is far less certainty in a lineup that could be quite imposing.

Joining the talented Collins in the infield at second should be Nolan Steevens, who hit .362 last year. Lawrence’s Julio Leon, who hit .300 as the DH last year, will likely start at first while impressive freshman Leo Romero from Lawrence, where he was a shortstop, has the inside track at third.

“He (Romero) has all the tools — great hands, great instincts, great body,” said Mejia. “He could become one of the best players we’ve had here.”

There are two battling for the starting spot behind the plate and Mejia is high on both of them — Newburyport’s Bob Lagasse, who was out with an arm injury last year, and Windham freshman Riley Magee.

There are a crew of good candidates in the outfield but Peabody’s Ben Irvine, who hit .338 last year, is set in center field. Battling for the other spots are the likes of Lawrence’s Alex Almonte, Lynnfield’s Kyle Hawes, Lawrence’s Cesar Trinidad and Malden’s Andre Caulfield.

“This is a little different team than we’ve had — this is the deepest team I’ve had and we have more power than last year,” said Mejia. “Offensively, this will be one of the best teams I’ve had here.”

That’s quite a statement since the Knights have traditionally put up big numbers, including last year when the team batting average was .374 with 29 home runs to their credit.

As for whether the Knights can return to the College World Series for the fifth time in the last six years, it should come down to pitching.

“It’s nice to have your ace back but then we’ll have to see,” said Mejia. “We have a lot of potential but you never know how they develop.”

Prior to the trip, they got their season off early on a positive note last week , sweeping Great Bay Community College in a doubleheader, 4-3 and 9-6 with Lagasse and Magee pacing the offense. Both had two hits in the opener and Magee went 4 for 4 with a home run in the second game. Almonte also had a home run and was 3 for 3 in the second game.

NECC at a glance

Youth focus: There are 18 freshmen listed on the roster

Miscellaneous: There are nine players on the roster who call Lawrence home