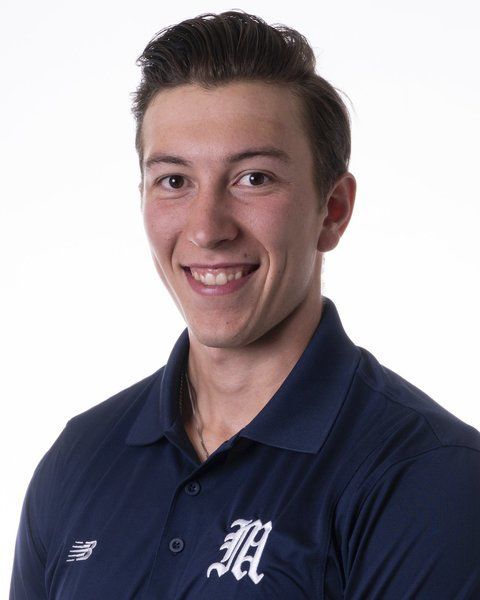 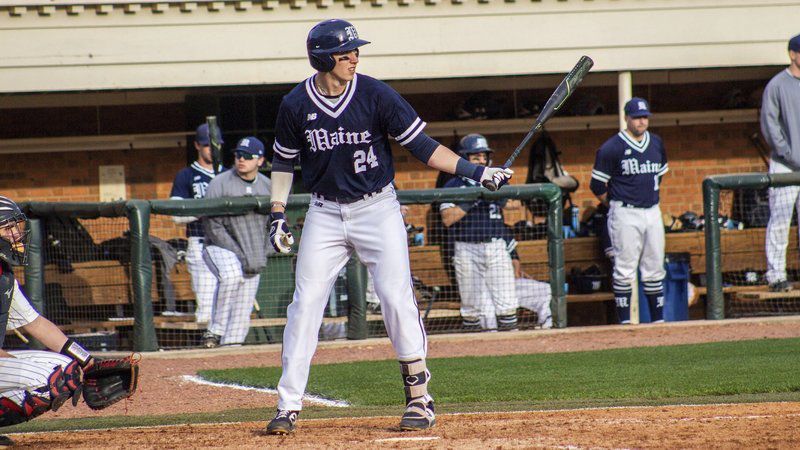 Courtesy Photo North Andover's Joe Bramanti, shown here getting ready to see a pitch during a game last year in Orono, Me. Bramanti is a University of Maine junior and starting at third base.

Courtesy Photo North Andover's Joe Bramanti, shown here getting ready to see a pitch during a game last year in Orono, Me. Bramanti is a University of Maine junior and starting at third base.

The first man-to-man conversation University of Maine baseball coach Nick Derba had with Joey Bramanti was more than five years ago.

Bramanti, heading into his junior year at North Andover High, was in Orono, Me. for the UMaine baseball prospect camp.

“The camp was over and he came up to me. I gave him my honest evaluation,” recalled Derba, then an assistant coach at Maine. “Joe was a big, strapping dude. But I thought he had some limitations for this level. I said, ‘Joe, you need to look at D2 schools. I think that’s your level.’ “

Bramanti listened, took it in, and thanked Derba for his time before heading for the 3-hour ride home.

Fast-forward to 2020, with the UMaine baseball team opening its season today at Winthrop University in Rock Hill, S.C.

Derba will see a lot of the 6-foot-4 Bramanti this season, at third base while batting third or fourth.

“Why did he come back, after what I told him? I have no idea,” said Derba, in his fourth year as head coach. “But he did. And it told me about who he was, the passion he had for the game. In terms of work ethic in trying to get better … Joe is at the top.”

Bramanti’s route to Orono, Me. was anything but a straight line.

He did consider a few Div. 2 and Div. 3 schools out of high school – they were the only ones calling, – receiving an offer at a national powerhouse.

“I wasn’t upset at Coach Derba’s evaluation, I took it as a challenge, that I would show him he was wrong,” said Bramanti. “I had always wanted to play Division 1 baseball. That was always the goal.”

After high school, he opted for a post-graduate year at Cheshire (Conn.) Academy, under the tutelage of noted prep school baseball and hockey coach John Toffey.

In more than a half-dozen years between Salisbury School and Cheshire, Toffey had helped send a few dozen students to Div. 1 baseball schools.

That year was a game-changer for Bramanti. Not only did he get noticed playing among several D1 recruits, but off the field he matured, too.

“Chesire taught me about being on my own, getting a work ethic without my parents there to push me in school or lifting or working in the cages,” said Bramanti. “I had to figure everything out on my own, budgeting my time between academics and baseball. It really was the best decision I ever made.”

It was while at Cheshire that Derba caught Bramanti again. Seeing that he improved, Derba offered him a roster spot.

He only got 15 at bats as a freshman on a veteran team, striking out nine times.

“First of all, it wasn’t easy not playing after playing every day since junior year in high school,” recalled Bramanti. “It kind of hurt (my ego). I realized I wasn’t ready for the speed of the game. I needed to work counts better. I was getting beaten badly. But the good part was I knew what I needed to work on to play.”

First base was open in the fall, and Bramanti took off with the opportunity, starting the year batting fifth. Within a month he was moved to “cleanup,” hovering above .300 the entire season.

He ended up hitting .296 with three homers and 13 doubles as a sophomore and was named second team All-America East.

A big success, right? Not entirely.

“It was great getting the opportunity to play every day, but not winning was not fun,” said Bramanti, of the 15-34 Black Bears in 2019. “Sure, you want to succeed individually, but it’s more of a blast when you win.”

Bramanti got a nice surprise before this school year started as a reward for his play on the field. Derba offered him a scholarship.

“That was nice,” said Bramanti.

With Maine losing an all-star third baseman in Danny Casals, Bramanti let it be known this fall that he would be interested in assuming that role if open. Derba agreed to be open to the possibility.

Bramanti will be starting at third base in today’s opener.

“He did the work this fall, using his feet better, reading balls,” said Derba. “He took a countless amount of groundballs. He looks ready to play the position well.”

As for the offensive part, Bramanti’s role on the Black Bears is a big one. He is expected to produce runs; lots of runs.

“I got stronger this offseason and I worked on simplifying my swing,” said Bramanti. “The goal is to have a quicker bat with more power.”

Derba said Bramanti’s performance will play a big role in the success of the improved Black Bears.

“Barring an injury, Joe will play every inning of every game at third base,” said Derba. “It’s not a secret. We need Joe to be a major factor on this team, at least comparable to what he accomplished last year.”

As a junior, there are other implications for Bramanti. The Cape Cod League, which is the summer home for the best collegiate players in the country, and the MLB Draft are on his radar.

“Every kid that plays wants that,” said Bramanti. “Right now I’m not thinking of that. I don’t need distractions. We have Winthrop this weekend. We need to get off to a good start. We need to win.”

Joey and his dad, Joseph “Jay” Bramanti don’t look like twins when it comes to baseball.

But when it comes to passion and production, they might as well be twins.

Joey’s dad is a Hall of Famer out of Burlington High, where as a first baseman and pitcher he guided his alma mater to one of its greatest season ever as a senior captain in 1977. He was named team MVP, leading the Middlesex League in hitting (.476) while compiling a 7-2 record on the mound.

“From the beginning, he’s always been my No. 1 hitting coach,” said Bramanti of his dad.