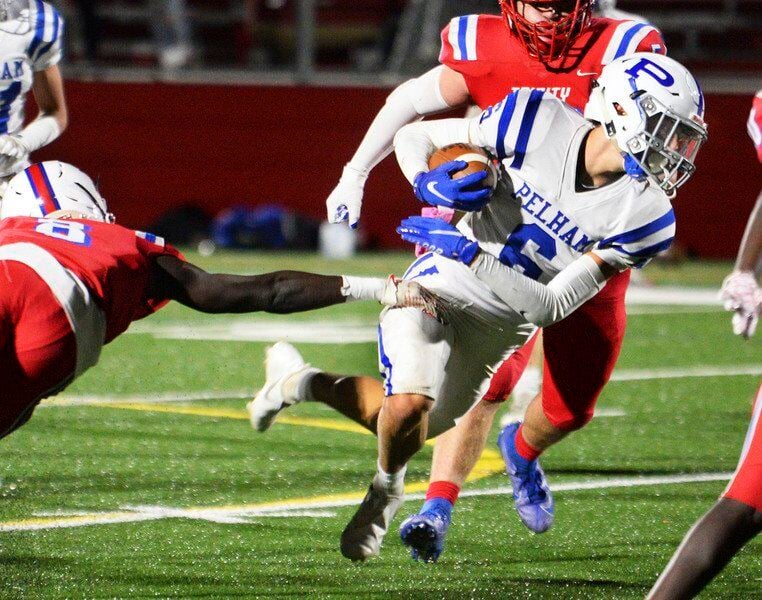 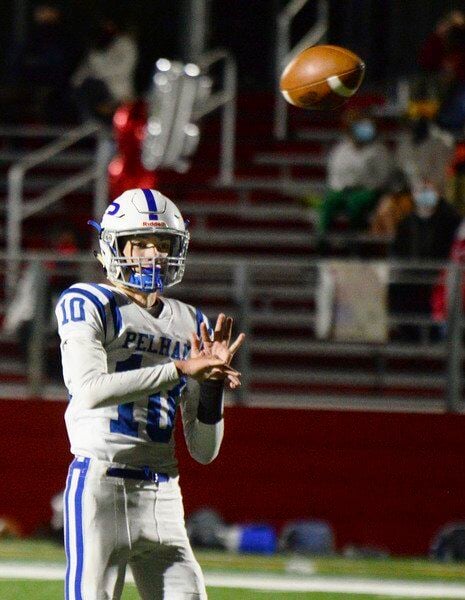 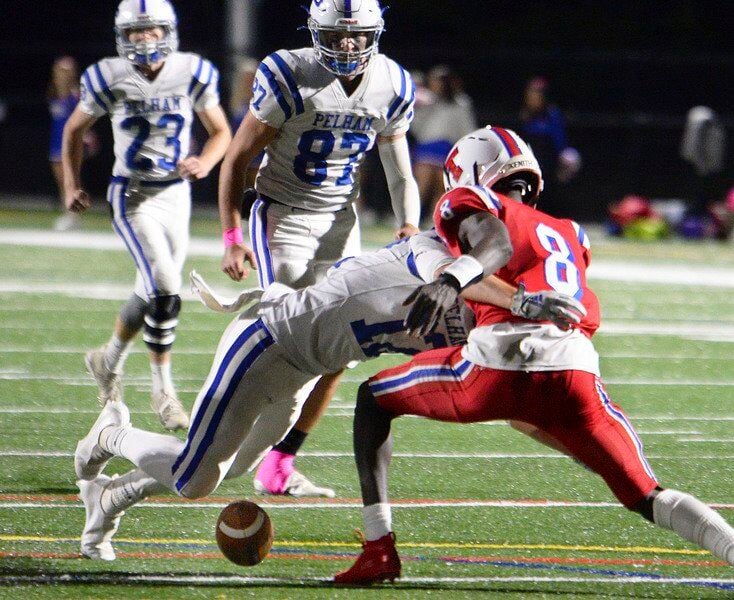 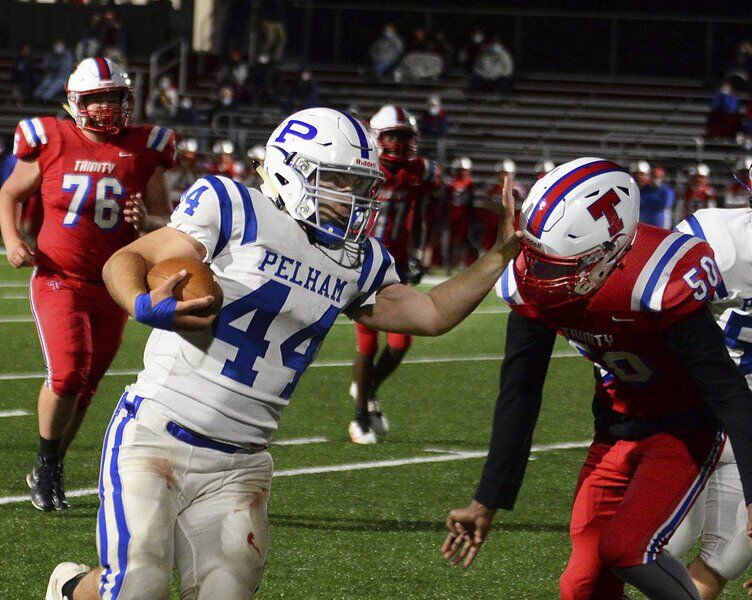 CARL RUSSO/staff photoPelham's Ethan Demmons pushes away Trinity's Sully Masuku for a long gain on Friday. Demmons and the Pythons dominated with their running game. 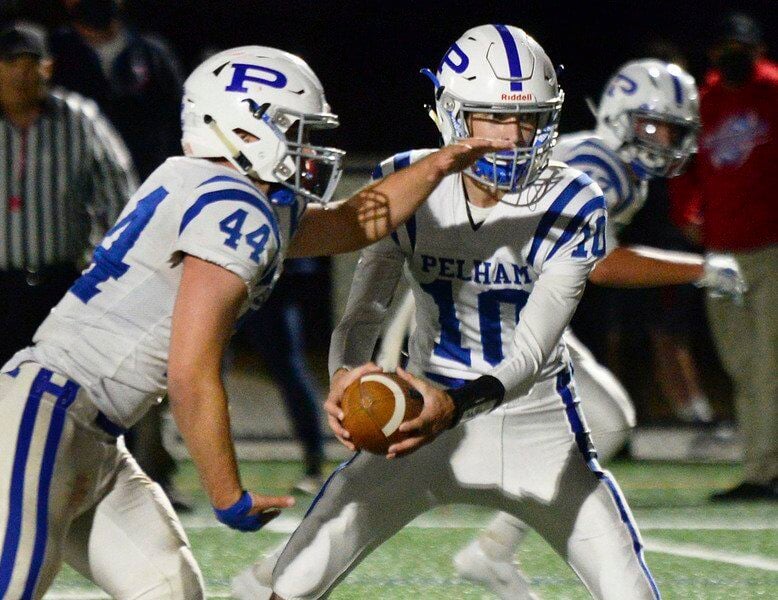 CARL RUSSO/staff photoPelham's Ethan Demmons pushes away Trinity's Sully Masuku for a long gain on Friday. Demmons and the Pythons dominated with their running game.

MANCHESTER, N.H. — As Pelham’s Jake Herrling somersaulted, head-over-heels, in the air, he had just one thought in his mind.

“With all the adrenaline, I didn’t really know what was going on,” said Herrling. “I was just thinking, ‘Hold onto the ball!’”

Facing a fourth and goal late in the first quarter, Pelham quarterback Jake Travis rolled to his left and tossed a pass into the end zone that Herrling jumped high into the air to catch.

As Herrling grabbed the ball, he was hit hard in the legs, sending him tumbling through the air before landing hard on his back.

But the senior held onto the ball for a touchdown, and Pelham never looked back, rolling to a dominant 25-0 victory over Trinity — the No. 1-ranked team in New Hampshire Division 3 — on Friday night.

The win was the Pythons’ third straight shutout to start the season, outscoring opponents 106-0

“We came out and played great tonight,” said Herrling. “Trinity is a great team that hopefully we will see down the line (in the playoffs). We are always confident, we were ready, everyone played well and it was a great win tonight.”

Pelham (3-0) and Trinity (2-1) both entered the game unbeaten, with the Pioneers ranked No. 10 overall in the New Hampshire Union Leader Power Poll, tops for a Division 3 team.

“Trinity is a very good team,” said junior Noah Coppinger. “We are always confident and we always played hard. On defense, we prepared and executed the way we needed to.”

For the third straight game, Pelham’s defense was dominant. The Pythons held Trinity to just four total yards and no first downs in the first half, as they built an 18-0 lead. The Pioneers managed just 80 yards for the game, 63 on a single drive that ended with a turnover on downs.

“On defense, we were locked in and everything went well,” said Herrling. “We knew what was coming at us. Everyone was hitting their keys and it went really well.”

Pelham forced a three-and-out on the game’s first drive. The Pythons then embarked on a 14-play, 61-yard drive that ended with Herrling’s acrobatic TD catch.

Just three plays into the next drive, the 6-foot-1, 235-pound linebacker Coppinger intercepted a pass and returned it to the Trinity 37-yard line. Five plays later, Kevin Bodenrader scored a 6-yard touchdown.

Pelham’s defense then needed just two plays on the next drive to force a fumble that was recovered by junior Josh Gravel. Three plays later, fullback Ethan Demmons pushed in for a 1-yard touchdown and it was 18-0 while Trinity’s offense had run just eight plays.

Penalties called back three Pythons touchdowns on their final drive of the first half. But Pelham closed out the scoring on the first possession of the second half, when Bodenrader broke free for a 31-yard touchdown.

The Pioneers threated to score just once, driving to Pelham’s 24-yard line on their first possession of the second half. But Jake Cawthron stuffed a run on first down, sacked Trinity QB Peter Alisandro on second down, knocked down a pass on third down and then pressed the QB into an incomplete pass on fourth down.

“Our running backs always do a good job of running through contact,” said Coppinger, an offensive lineman. “As long as we do our job blocking, we will have success. We blocked well, and we ran hard.”

Zach Jones made eight tackles for the Pythons, Coppinger made six stops and Travis made four stops.

“This was a solid win,” said Pythons coach Tom Babaian. “The rushing game and our defense played well for us tonight. We need to continue to improve because Milford is a very good team, and will no doubt be well prepared to play us next week.”

For video of Jake Herrling’s acrobatic TD catch, and other highlights from Pelham’s win over Trinity, visit eagletribune.com.