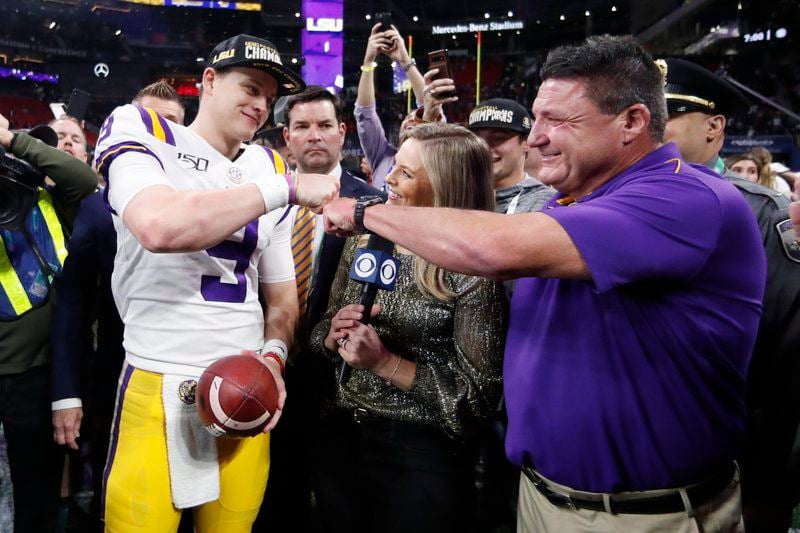 Associated PressLSU, led by quarterback Joe Burrow and head coach Ed Orgeron, will play for the College Football Playoff National Championship. Many wonder if they should have played a tougher opponent in the semifinals. 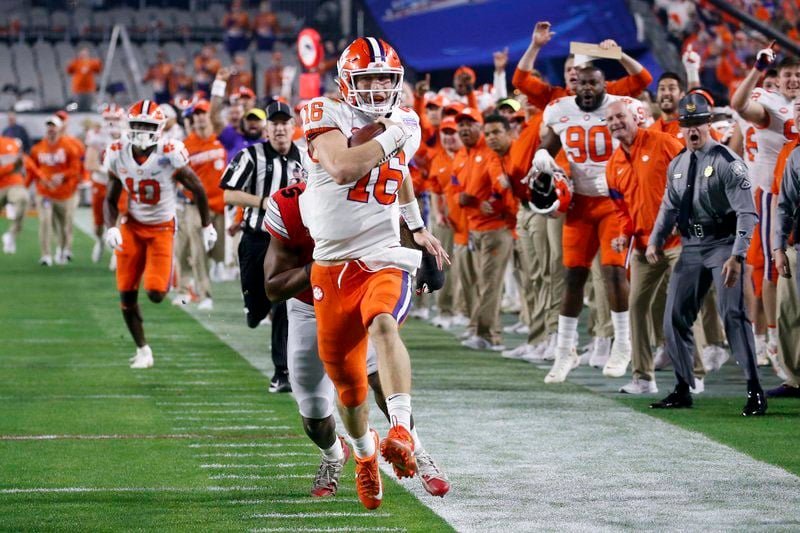 Associated PressQuarterback Trevor Lawrence, here running for a touchdown against Ohio State, and Clemson will play for their second straight College Football Playoff National Championship on Monday. The playoff system still has many critics.

Associated PressLSU, led by quarterback Joe Burrow and head coach Ed Orgeron, will play for the College Football Playoff National Championship. Many wonder if they should have played a tougher opponent in the semifinals.

Associated PressQuarterback Trevor Lawrence, here running for a touchdown against Ohio State, and Clemson will play for their second straight College Football Playoff National Championship on Monday. The playoff system still has many critics.

When Clemson and LSU play for the 2020 College Football Playoff National Championship in New Orleans on Monday night, it will mark the six-year anniversary of the playoff system.

When the four-team College Football Playoff debuted after the 2014 season, culminating with Ohio State beating Oregon 42-20 for the championship, it gave fans their long-awaited wish of a champion being determined on the field instead of from polls and computers.

But it didn’t take long before calls for a change of the format began. Fans, and even some coaches, have questioned the four-team format from the beginning, suggesting deserving teams have been left on the outside.

Still, as Monday’s game approaches, it doesn’t appear that expansion is likely, at least in the short term.

One criticism of the College Football Playoff is that it has become a members-only club.

In its six years of existence, only teams from the Power Five conferences — ACC, Big Ten, Big 12, Pac-12 and SEC — have appeared. No members from the second tier of major conferences informally known as the Group of Five — AAC, Conference-USA, MAC, Mountain West and Sun Belt — have secured a bid.

Central Florida, unbeaten AAC champions in 2017 went as far as to crown itself the national champion after it went 13-0 and beat Auburn in the Peach Bowl.

“I’m OK with it if they are worthy of being included,” said former Florida wide receiver and current SEC Network analyst Chris Doering. “I don’t like the idea of including a Group of Five team just to include them. I still think the criteria should be like it is now with the best four teams. Just to have them in there, for the potential of a Cinderella, I think would be unfair.”

Anthony Herron, who played on Iowa’s defensive line in the late 1990s before landing in the NFL and the Arena Football League, now works as an analyst for the Big Ten Network and the Pac-12 Network.

“I’m completely comfortable with a four-team playoff,” Herron said. “I think every version of it that gets expanded is just going to continue to go toward attempting to kind of satisfy our appetite for more.”

This year, LSU, Ohio State and Clemson dismantled their regular-season opponents as the three teams combined to go 36-0 and added conference-championship wins to their seasons’ resumes.

While the 13-member committee’s top three teams left no doubt, the fourth spot became a major topic of discussion as the regular season neared its end.

By halftime of that game, which LSU led 49-14, calls for expansion were revived.

“You had Ohio State, LSU and Clemson just leading the pack throughout the entire season, and whoever ended up in the fourth spot, would someone in the fourth position given LSU a better game than Oklahoma? It’s possible,” Herron said. “But when it comes down to it, I don’t think anyone else I saw in the country this year would have defeated any of the three teams at the top.”

But in the College Football Playoff title game, lower seeds have knocked off higher seeds in all five games.

Doering said he thinks the committee has selected the right teams for its playoff. He said LSU’s blowout win had more to do with its level of performance rather than Oklahoma not being a worthy recipient of the fourth spot.

“I think you can say Oklahoma was not worthy, you can say they were worthy, I think what happened is they ran up against a really good LSU team that’s difficult to stop and I think you are going to see the same things on Monday night,” Doering said. “The offense, I’ve been watching them all season long covering them for the SEC Network, I keep waiting for them to have an off night and they don’t have an off night.”

Entering this season, the Big Ten had been excluded from the last two College Football Playoff semifinals. Big Ten commissioner Jim Delany retired this month, but he long held the belief that his conference’s nine-game league schedule should be taken into account by committee members. The ACC and the SEC play an eight-game league slate, while the Big Ten, Pac-12 and Big 12 play nine league games.

The College Football Playoff’s current contract is set to expire in six years. While calls for a playoff expansion continue, Heron said it’s not likely to happen until terms for a renewal of the contract are discussed.

“We’re at least going to see this first contract of the College Football Playoff play out,” Herron said. “And it will expand at some point. I don’t think the NCAA or anyone else is going to be in a hurry to do it, because right now, you have the interest of some many folks getting drummed up just by the fact that there’s the risk involved with major programs and major conferences not getting in.”

“I think we’d be naïve to see that it’s not going to expand, whether that’s six or eight I think it’s coming here,” Doering said. “It’s too big of a potential moneymaker, there’s too many fans that want it. I think it does open some things up for potential mismatches that will continue to. I mean let’s be honest, you look at the gap between the haves and the have nots, and it’s never been bigger.”