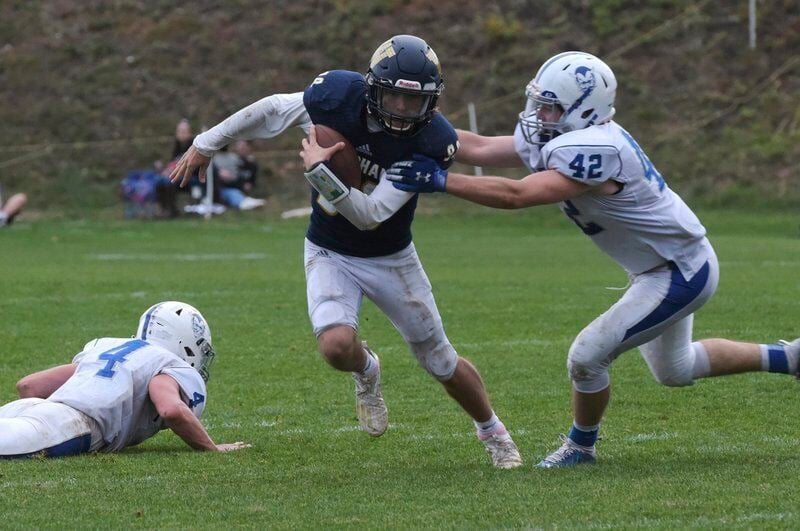 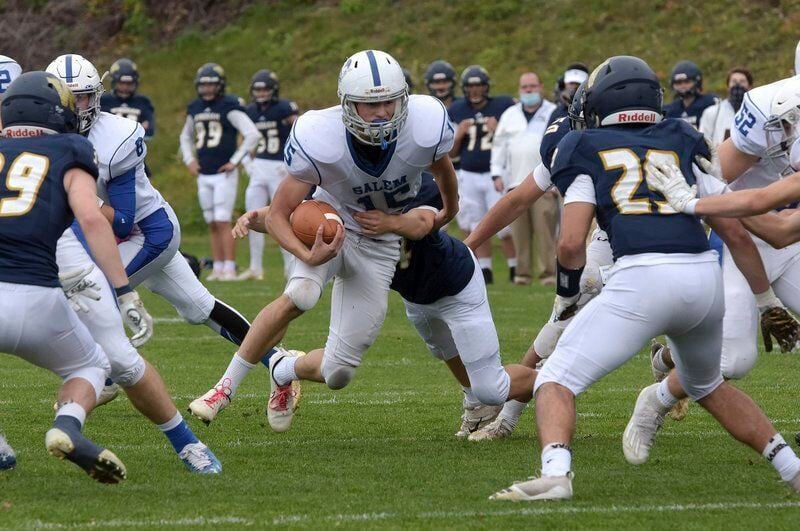 TIM JEAN/Staff photoSalem’s Aidan McDonald runs straight through the Windham defense for a big gain on Saturday. McDonald ran for a game-high 157 yards. 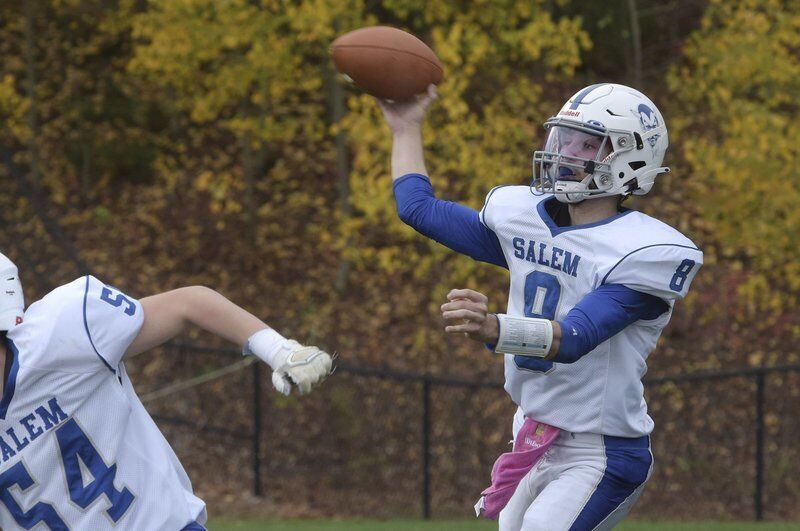 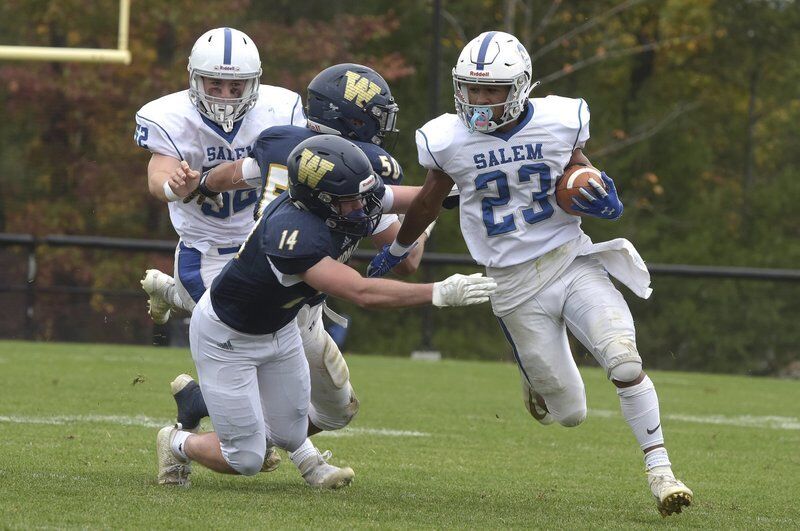 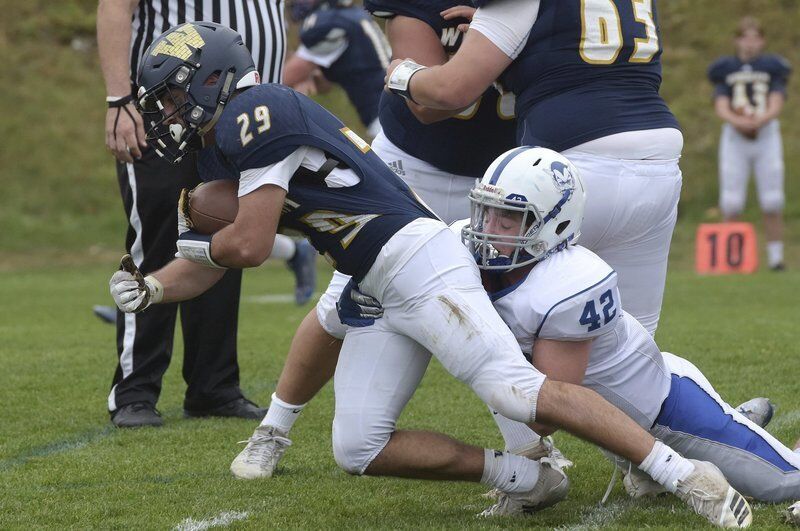 TIM JEAN/Staff photoWindham’s Stephen Mague is tackled by Salem’s Damian Gigante on Saturday. Mague ran for 92 yards and had a big game on defense. 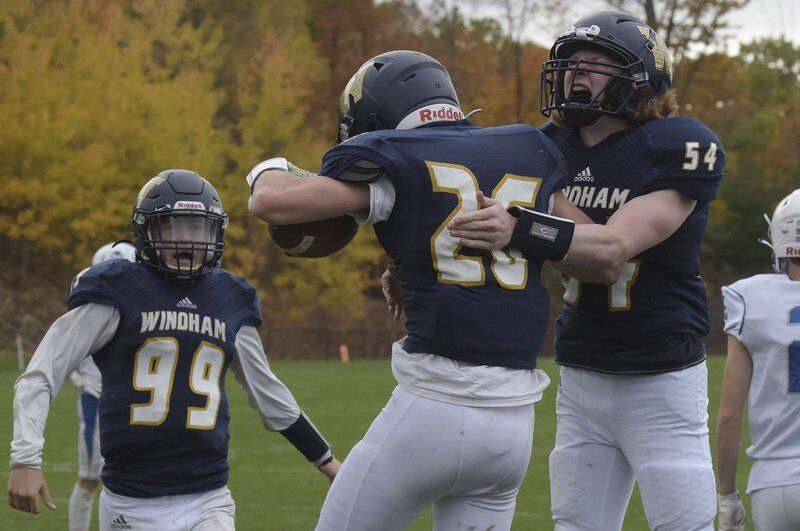 TIM JEAN/Staff photoSalem’s Aidan McDonald runs straight through the Windham defense for a big gain on Saturday. McDonald ran for a game-high 157 yards.

TIM JEAN/Staff photoWindham’s Stephen Mague is tackled by Salem’s Damian Gigante on Saturday. Mague ran for 92 yards and had a big game on defense.

WINDHAM — In the blink of an eye, Salem found itself in a battle with Windham on Saturday.

When the Jaguars’ Joey DaSilva ran a QB sneak into the end zone for a touchdown with 4:15 left in the game, a three-touchdown Blue Devil lead entering the fourth quarter had been cut to just six points.

“We had to calm down,” said Salem captain Jacob Brady. “Windham was going to make plays, they’re a good team. We couldn’t get too riled up. They were rolling. We had to stop their momentum and respond.”

Respond the Blue Devils did.

Salem marched 71 yards on the following drive, and Dante Fernandes ran in a 5-yard touchdown with 1:45 left in the game to clinch a 26-14 victory over upset-minded Windham in the regular season finale for both teams.

“We’re very excited,” said Fernandes. “We made a few mistakes that we need to clean up, but it’s good to come into a tough field and get a good win.”

Salem (3-1) grabbed the lead just 2:36 into the game. Thomas Ahlers recovered a fumble at the Windham 26-yard line, and four plays later Aidan McDonald ran for a 3-yard touchdown.

Windham (0-3) then drove to the Blue Devils’ 13-yard line. But McDonald burst through the line of scrimmage and delivered a massive hit to cause a fumble that he recovered.

Two plays later, McDonald broke free for what would have been a 75-yard touchdown on a sweep. But the referees were fooled by the inside fake and blew the play dead.

“That was crazy!” said McDonald, who finished with a game-high 157 rushing yards. “Jake (Brady) had an amazing fake, and they had no idea I was even running outside. It was a great play. I couldn’t believe it.”

The Blue Devils did add to their lead a possession later when QB Cody Clements scrambled out of the pocket and ran for a 35-yard touchdown. Salem made it 20-0 on the first drive of the second half on a 4-yard Fernandes TD run.

In the fourth quarter, however, Windham staged its comeback.

With Salem driving at the Jaguars’ 13-yard line, Windham’s Keegan Parke caused a fumble that was recovered by Stephen Mague (game-high 12 tackles).

The Jaguars then drove 84 yards, and DaSilva found Westin Lippold in the end zone for a 14-yard touchdown with 7:26 left in the game.

Windham’s Adam Burke then booted a perfect onside kick, that bounced twice and was recovered by Jaguar AJ Fox. Seven plays later, DaSilva ran for a 3-yard TD to make it 20-14 with 4:15 left.

“That (comeback) showed a lot,” said Windham coach Jack Byrne. “We’ve started the season with three great programs (Pinkerton, Londonderry, Salem). We were shut out in each of our first two games, then we were in the same situation today. I don’t know many guys that would pick themselves up again and come back swinging like our guys did.”

But Salem was able to bounce back, and Fernandes scored to make it 26-14.

“We had to calm down because we were getting too rowdy,” said Fernandes. “We had to play Salem football and run it down their throats like we do. Our team has lot of perseverance.”

Salem’s Matteo Mustapha recovered a fumble on the ensuing kickoff, and the Blue Devils ran out most of the clock.

Both teams will return to action next week, in the first round of the Division 1 “open” state tournament. Playoff matchups were expected to be released by Sunday morning.

“We played tough, we hit hard and we played good football,” said Salem coach Steve Abraham. “We made some mistakes, and had some adversity, but we’ll clean that up.”