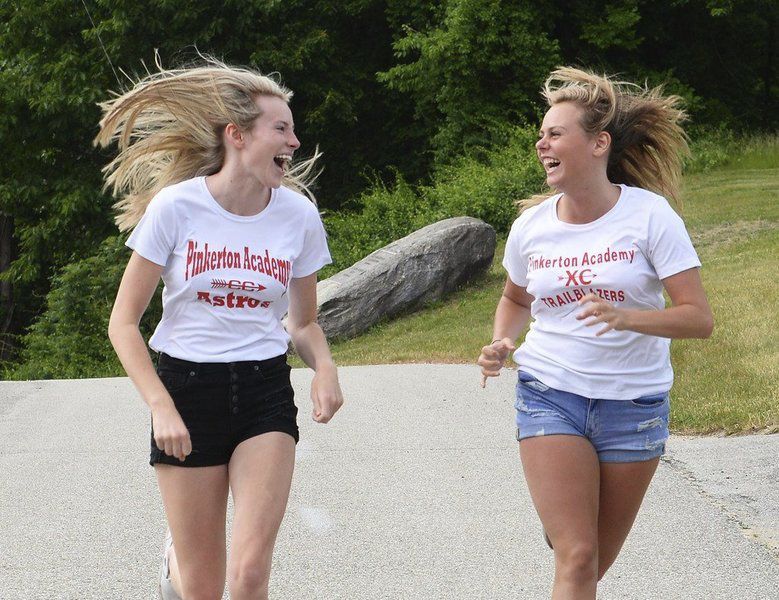 CARL RUSSO/staff photoPinkerton Academy cross country runners Molly McGaffigan, left, a senior in the fall, and upcoming junior Mariesa Preble share a laugh while out for a run. 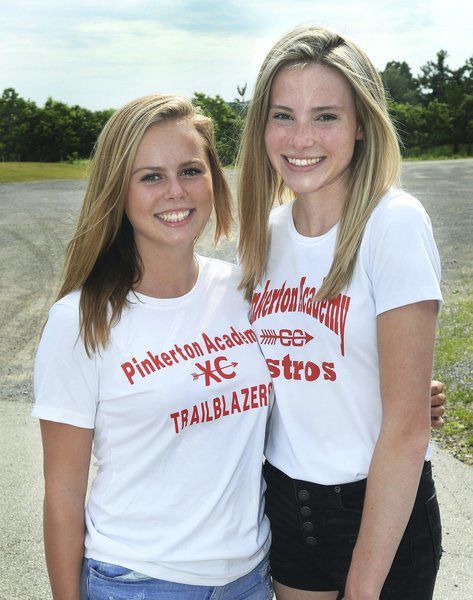 CARL RUSSO/staff photoPinkerton Academy cross country runners, Mariesa Preble, left, a junior in the fall, and upcoming senior Molly McGaffigan will be key runners for the Astros. Both were injured last year.

CARL RUSSO/staff photoPinkerton Academy cross country runners Molly McGaffigan, left, a senior in the fall, and upcoming junior Mariesa Preble share a laugh while out for a run.

CARL RUSSO/staff photoPinkerton Academy cross country runners, Mariesa Preble, left, a junior in the fall, and upcoming senior Molly McGaffigan will be key runners for the Astros. Both were injured last year.

The Astros, who had captured four straight Division 1 state titles and had qualified for New England six straight years, were expecting another strong season.

Returning, after all, was standout senior Meghan Cross along with a promising group of younger runners including junior Molly McGaffigan and sophomores Mariesa Preble and Riley Sweeney. Expectations under new coach Jon Alizio were fairly high.

“After the end of last year, we were all saying, ‘Don’t say the F-word (for fracture),’” said McGaffigan.

That was certainly understandable as the Astros not only didn’t qualify for New England, but they didn’t even advance from the Division 1 meet to the Meet of Champions for the first time in at least two decades.

“I was very sad when I found out what I had (a stress fracture), and the season was tough for everyone,” said Preble, who was the team’s No. 2 runner as a freshman and ran a fine 19:55.5 for 5K at the MOC. “We were all disappointed.”

Things began looking up during this year’s indoor track season, however. Preble ran the 1,000 meters and finished sixth at the Division 1 state meet, and she and McGaffigan were on Pinkerton’s 4x800 relay that placed first at states and came in 12th at New England.

Both Preble and McGaffigan could have benefited by continuing to develop and putting distance from their stress fractures with a strong outdoor track season, but the coronavirus pandemic made that impossible.

Still, both are looking forward to a cross country revival in the fall and are already preparing for it.

“I think I’m in pretty good shape,” said Preble, whose older brother Nolan was a senior standout for the Astros. “I’ve been training with Meghan Cross, who lives down the street from me.

For her part, McGaffigan is aiming to finish in the top 20 individually at the Division 1 state meet while putting emphasis on having the team bounce back.

“We want to qualify for New England as a team,” said McGaffigan. “We want to get back to where we’ve been — a top three team (in New Hampshire).”

To that end, McGaffigan made good use of her time while restricted at home during the pandemic.

“I’ve been running a lot — it gave me something to do,” she said. “I’m excited for our summer workouts and our next cross country season.”

That’s good news for Alizio, who is looking for Preble and McGaffigan to lead the Astros back to their usual level.

“Both are enormously talented and we will be looking to them for leadership this fall,” he said.

Boosting the Astros in the fall should be several talented freshmen. Hampstead’s Bella Pappalardo and Hannah Bernard finished fourth and fifth respectively at the Tri-County Championships last year while Derry’s Ginia Rufo came in third in the New Hampshire Middle School meet. Bernard is the daughter of former head coach and current assistant Amy Bernard.

“Both are enormously talented and we will be looking to them for leadership this fall.”