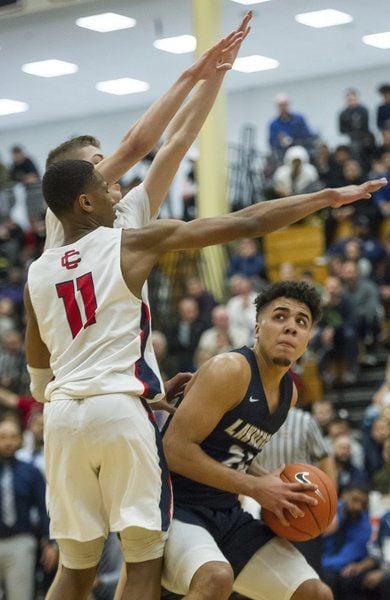 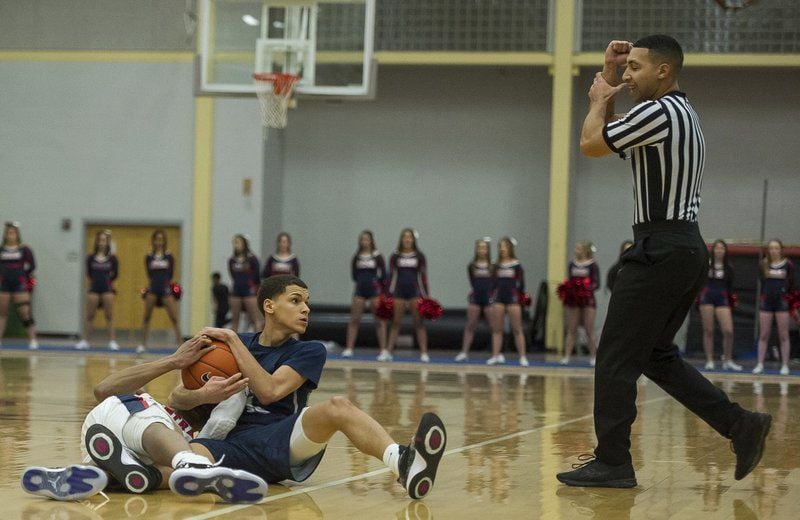 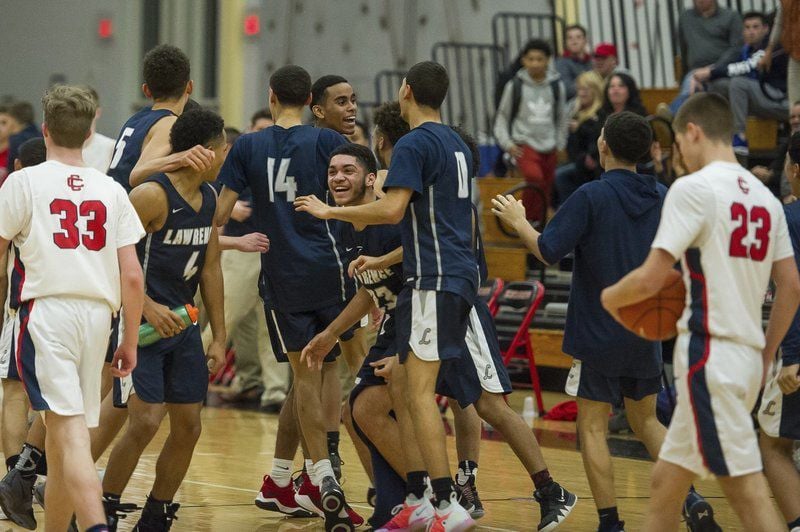 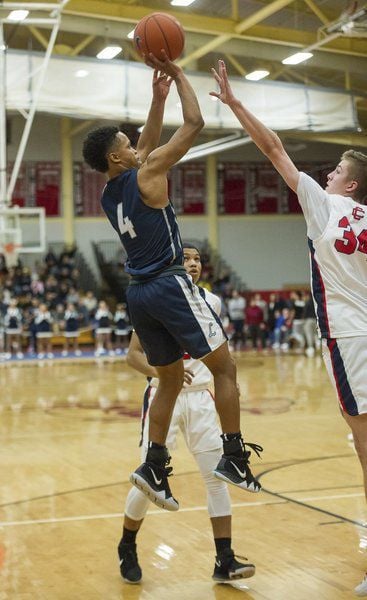 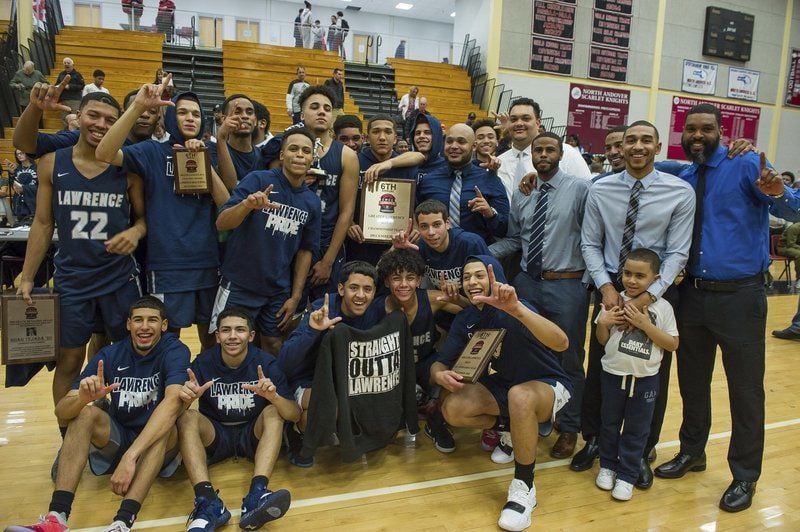 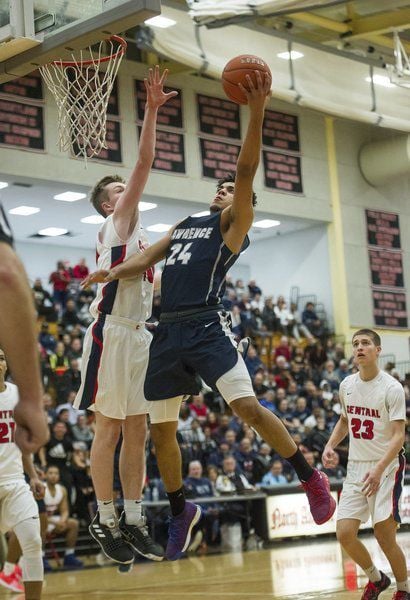 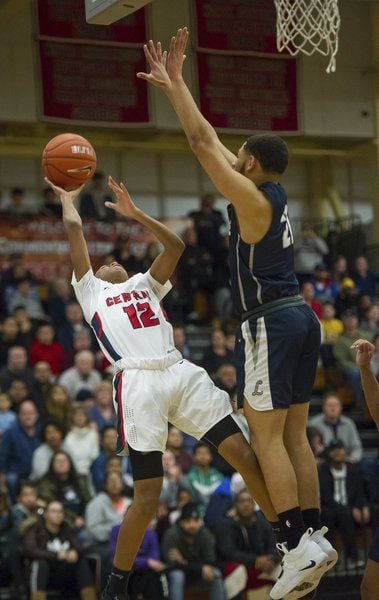 That was Lawrence boys basketball coach Jesus Moore’s message to Luis Reynoso as he checked into the championship game of the Commonwealth Motors Christmas Classic. With the undefeated Lancers squaring off with a 6-0 Central Catholic team, the jam-packed Crozier Fieldhouse was electric. If you arrived late, you were stuck standing.

Somehow, Reynoso was able to bring the intensity to another level.

Tied 6-6 midway through the first quarter, the senior entered a game where both teams were still feeling each other out.

With Reynoso now at the reins, Lawrence went on a 16-3 run keyed by the 6-4 guard’s fast breaks, and wound up blowing out Central Catholic, 80-51. The Raiders were never able to recover from the early double-digit deficit.

“Guys actually ran hard tonight,” Moore said. “We’ve been watching film and we jog a lot. I’m telling them, ‘To get to the next level, you guys gotta push yourselves even more. Tonight we were running like greyhounds. It was nice to see and it paid off.”

The fastest in the pack, Reynoso finished with 20 points and the tournament’s MVP trophy.

“It meant everything,” Reynoso, the reigning Eagle-Tribune MVP, said of the honor. “All my teammates should get MVP, because we won it as a team.”

The Lancers certainly did, playing stifling team defense all evening.

Ahead 24-15 after one, Lawrence widened the gap. Despite Raiders senior Kevin Constant’s (14 points) best effort to sway momentum with a pair of second quarter dunks that roused the Central crowd, Lawrence held them to 11 points in the period, and took a 44-26 lead into the half.

“I told them the game wasn’t over,” Moore said. “Last round Central was down double digits at halftime and they clawed back in. They’re a tough, gritty team.”

Sure enough, Central came out shooting. They collected the first three buckets of the second half, but Lawrence guard Brandon Goris (13 points) was quick to quell that hot start. Goris scored six third quarter points of his own, swaying the pendulum back to the Lancers’ side.

“It kind of killed the momentum that they were starting to get,” Moore said. “I think that was huge. That was easily a game that they go on a 10-0 run and it’s a battle, it’s a grind-out game from there. That was huge for us.”

Leading by 23 entering the fourth quarter, the Lawrence put any hopes of a wild Raiders comeback to bed.

The Blue and White opened the final period on a 7-2 run, guard Jaden Castillo was particularly good, and Reynoso was able to snag an offensive rebound and put it home for a back-breaking bucket.

“(Reynoso) knows why he came off the bench,” Moore said. “We talked before the game. He understood and I told him before the game, whether you’re starting or coming off the bench, you’re our guy. You’re our leader. “He’s the best player out there. I have faith in him. Tonight he really brought it. We get that Luis Reynoso and I think we’re going to be pretty tough to beat.” Nobody’s done it yet.

For Reynoso, winning the Commonwealth Classic in his final season was particularly sweet.

“It’s everything,” the senior said. “To Lawrence, my family, everybody.”

“They really wanted to get this one,” Moore said. “We kept talking all week about how long it’s been. We haven’t been to a final since 2012. Some people don’t think it’s a big deal but in our area the Christmas tournament is a big thing and we haven’t won it since 2006.”

After a dominant showing, Moore’s Lancers can change that “haven’t” to “hadn’t.”

“It was just perfect,” Reynoso said.