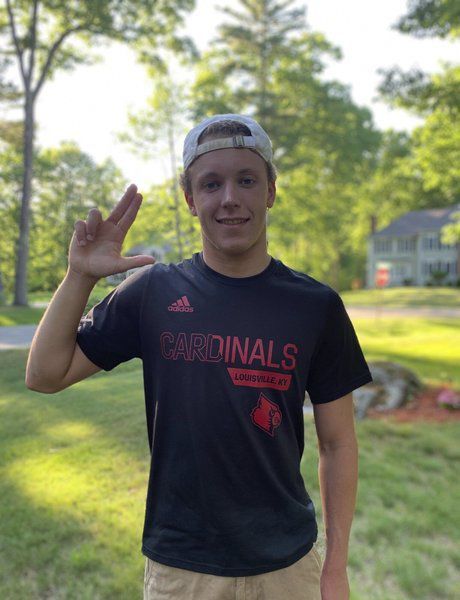 COURTESY PHOTO:Swimmer Ryan Hogan of Atkinson lets everyone know where he's headed in the fall of 2021 .... University of Louisville. 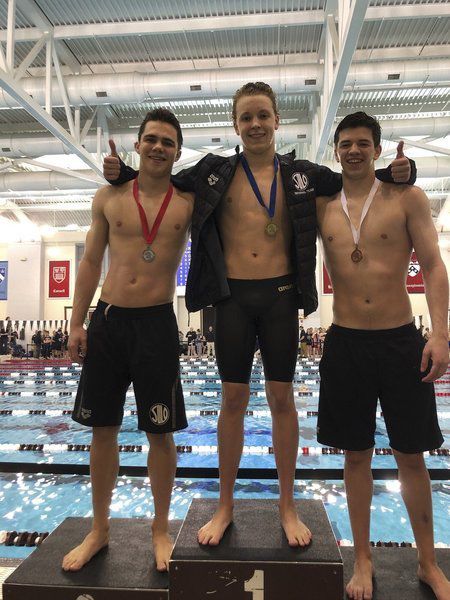 COURTESY PHOTO:Swimmer Ryan Hogan of Atkinson lets everyone know where he's headed in the fall of 2021 .... University of Louisville.

As the top-ranked junior in New Hampshire and No. 186 in the Class of 2021 nationally by collegeswimming.com, Ryan Hogan had some heavyweights interested in his services.

Recently, he announced for Louisville, which placed fifth at the NCAA 2019 Championships and ninth in 2018. Last winter’s NCAAs were cancelled due to the pandemic.

He had a great sounding board in recent U of L grad Michaela Sliney of Haverhill, a star diver for the Cardinals. She was his former teammate with Solo Aquatics out of Haverhill High.

Hogan said, “I’ve known her for quite some time. She said she loved the school and the team.”

Hogan dreams big and he feels Louisville can help him achieve those dreams.

“They have such a good history of making swimmers better: NCAA champions and Olympic gold medalists,” said Hogan, who hopes to qualify for the Olympic Trials, which were postponed to next summer.

The Hogan name is well known in local swim circles.

At this winter’s Big East Championship, former Eagle-Tribune MVP Taylor Hogan won the 200-yard butterfly (2:02.13). She became the third Xavier swimmer to win a Big East title since the Musketeers joined the conference in 2013-14.

A plus for Ryan is Xavier is in Cincinnati, which is just 105 miles from Louisville.

His other sibling, Emily, also was a standout for the Owls and graduated in the top 5 percent of her class. She’s at University of Delaware but doesn’t compete.

“I never felt any pressure,” said Hogan, who doesn’t compete for Timberlane, just his club team. “My sisters and I all loved it.”

Hogan played a ton of sports when he was young.

“I loved them. But swimming was always so important to me and that’s what I was best at,” said Ryan, who is ranked 56th in his Timberlane class of 277 students.

Two weeks ago, Solo Aquatics finally returned to the pool. Although at Bradford not Haverhill High’s Charles C. White Pool. Bradford is familiar territory for Hogan, who is a lifeguard there.

There have been plenty of career highlights for Hogan. Topping the list is last summer being ranked No. 7 in the 400 IM nationally in his age group.

NOTE: All events are in yards