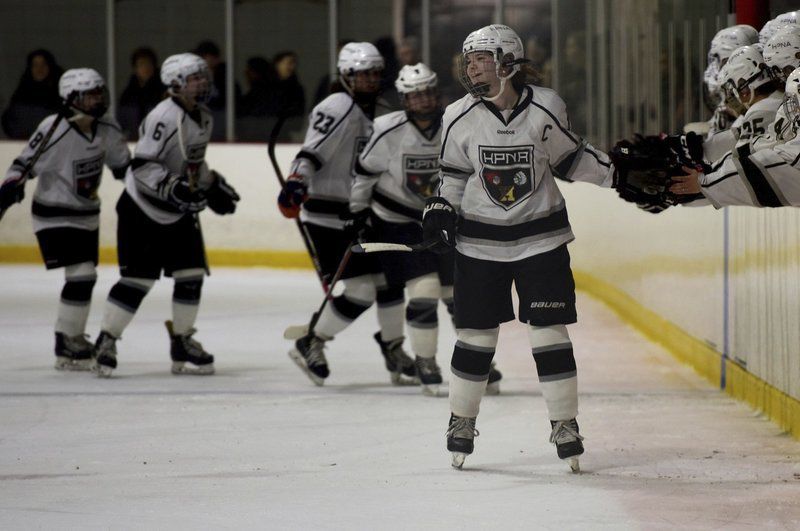 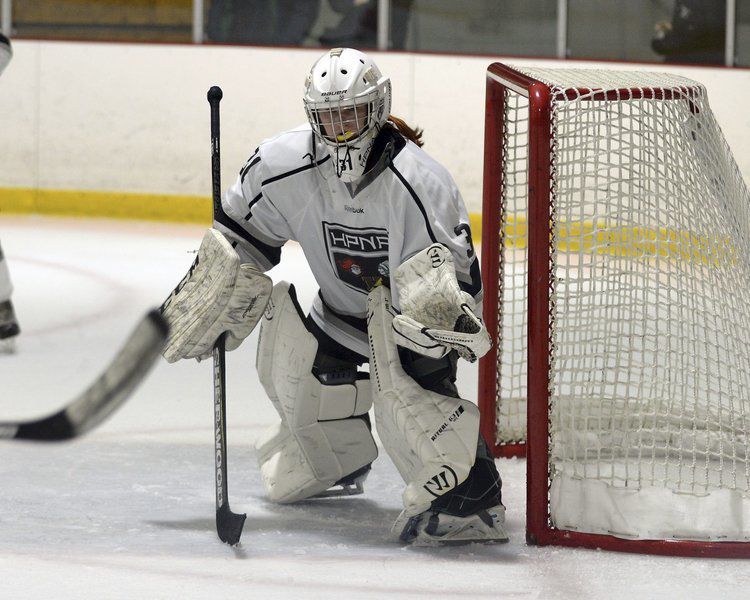 RYAN HUTTON/Staff photoJenny Hubbard was once again a rock in net as HPNA earned its first every victory over Methuen/Tewksbury.

RYAN HUTTON/Staff photoJenny Hubbard was once again a rock in net as HPNA earned its first every victory over Methuen/Tewksbury.

It was a victory seven years in the making, and the Haverhill/Pentucket/North Andover co-op girls hockey team reached the milestone in dramatic fashion.

Eliana Kane hauled in a pass at the far blue line, broke past two defenders and fired a shot home with 0:20 left in the game, giving HPNA its first-ever victory over defending Division 1 state champion Methuen/Tewksbury, 3-2 on Wednesday night at Veterans Memorial Rink in Haverhill.

The win snapped a 14-game winless streak (0-10-4) for HPNA against Methuen/Tewksbury since it began varsity play in 2013-14. The two teams tied in their first meeting this winter on Jan. 11.

“The way the girls celebrated, you would have thought we won the state title,” said coach Gary Kane. “Our No. 1 goal this season was to beat Methuen/Tewksbury. We felt like it was our time this season, and to finally beat them is really amazing. It’s the most satisfying win of my high school coaching career.”

HPNA led 2-0 with five minutes left in the game, before Methuen/Tewksbury’s Jessica Driscoll struck for a pair of power play goals — the tying tally with 3:53 left — to make it 2-2.

But HPNA would not be denied.

“Before the game, the girls were talking about that Herb Brooks speech from the movie ‘Miracle’” said Gary Kane. “When (Methuen/Tewksbury) made it 2-2, I told the girls, ‘This is our time!’ When they scored, our girls just got angrier. They knew this game wasn’t over.”

With just seconds left in the contest, HPNA devised a play for Eliana Kane — a defenseman who has now scored 13 goals this winter as a senior.

“Eliana went all the way out to the far blue line, away from the benches, and Reese Pascucci hit her with a pass,” said Gary Kane, Eliana’s father. “Eliana beat two or three people going towards the middle and held the puck through traffic. Then she ripped the puck top corner for the winner. Then the girls went crazy.”

Also starring for HPNA was goalie Jenna Hubbard, who made 21 saves.

“Jenna had a great game!” said her coach. “They had some point-blank shots that she made some terrific saves on. She has done so much for us.

“Ella Roe was also all over the ice making big plays on the forecheck and backcheck. Liz Cole was amazing on defense and girls like Morgan Whitlock, Deanna Bosco and Shelby Nassar also played great.”

Methuen/Tewksbury coach Sarah Oteri was impressed by the resilience of her team.

“We battled back, got better as the game went on, and were able to tie it,” said Oteri. “So that’s good. But it was heartbreaking to lose it in the end. This is becoming a good rivalry. They are a very good co-op team like we are. There are a lot of similarities. We both want to prove who is better.”