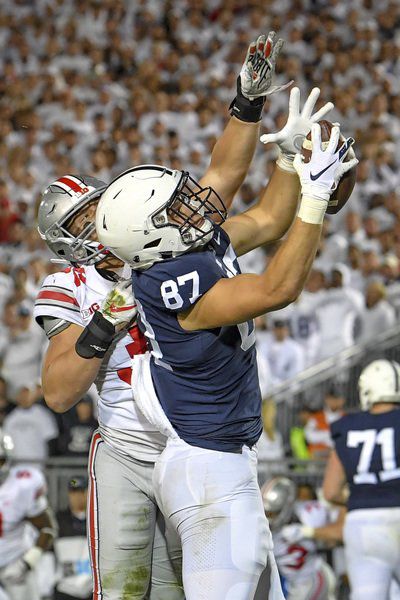 Courtesy of Penn State AthleticsMerrimac's Pat Freiermuth, here making a one-handed touchdown catch for Penn State against Ohio State in 2018, is preparing for his junior season back home due to the coronavirus pandemic. 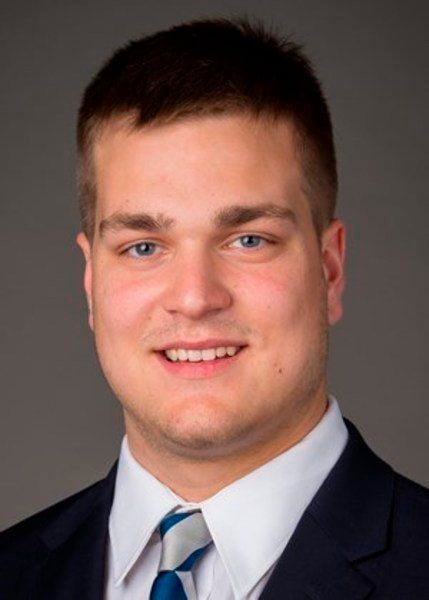 Courtesy of Penn State AthleticsMerrimac's Pat Freiermuth, here making a one-handed touchdown catch for Penn State against Ohio State in 2018, is preparing for his junior season back home due to the coronavirus pandemic.

MERRIMAC — Under normal circumstances, Pat Freiermuth would have spent the past two months with his Penn State football teammates, gearing up for the coming season. There would have been meetings, practices and eventually the annual Blue-White Game, which typically draws tens of thousands of fans for spring football’s grand finale.

Those preparations have continued, but since the coronavirus outbreak began, Freiermuth and his teammates have been forced to adjust to life working from home just like everyone else.

“I haven’t been home this long since I left high school to go to college, so it’s been nice being home with my brother and sister and my mom and dad, just spending time with them,” said Freiermuth, a 6-foot-5 tight end and a former Pentucket and Brook School standout.

“We’ve been in Zoom meetings with the team, the position group and the offense, and also working out. It’s good, it’s definitely challenging not being able to go to the gym or having an ideal setup, but I’m trying to find creative ways to work out.”

Freiermuth has been back home in Merrimac the last two months, where he has worked as best he can to prepare for the upcoming season away from his teammates. The focus has largely shifted to remote meetings, and the main priority recently has been working to install new offensive coordinator Kirk Ciarrocca’s system.

“We Zoom every couple of days the amount of time the NCAA allows us to meet,” Freiermuth said. “We’ll do that, go over the playbook, go over the installs. We did that all spring ball and now this is kind of our break before our summer session ramps up (today).”

Luckily Freiermuth hasn’t had to do it alone. His older brother Tim, a fellow Pentucket football alum who joined Bentley University’s coaching staff the same week as the outbreak began, is also back home. The two have a white board in their basement and have been working together to analyze their respective offenses and defenses.

Had things played out differently, Freiermuth might not be preparing for his junior season at Penn State, but for his rookie year in the NFL. Because he spent a fifth year in high school after repeating his sophomore year at Brooks, he was eligible for this spring’s NFL Draft.

Because of how uncommon it is for a player to jump to the NFL that quickly, Freiermuth didn’t know for sure that he was eligible until head coach James Franklin and tight ends coach Tyler Bowen pulled him aside late and the season and told him.

Had he declared, Freiermuth likely would have been the consensus top tight end available and a possible first-round pick, but he ultimately decided he’d be better served developing further before making the jump.

“I got very positive feedback but I felt that I needed to come back another year or even two years to develop more,” Freiermuth said. “So that’s why I decided to stay. I feel like there is room to improve on both the passing game and run blocking, so I just have to continue to work hard and we’ll see what happens.”

With the world still in a state of flux due to the pandemic, it’s not clear whether Penn State’s season will proceed on schedule or be moved to the winter or even the spring. Regardless of what the future holds, Freiermuth said his focus remains on improving as a player and being ready to help the team win, no matter when the season begins.

“I’ve just got to continue to help guys stay focused and stay positive to come back and expect to play in the fall, that’s our whole program’s mentality right now,” Freiermuth said. “We’re not taking a step back, we’re trying to use this to grow. So as of right now our mindset is that we’re playing in the fall, we’re going to be back in the fall and if we continue to do that we’re going to be in a good spot when we get back.”

After a brilliant high school career at Pentucket and Brooks — he was Eagle-Tribune defensive Player of the Year in 2016 as a linebacker, Merrimac’s Pat Freiermuth has become possibly the nation’s top tight end. Here are his stats through two years at Penn State.