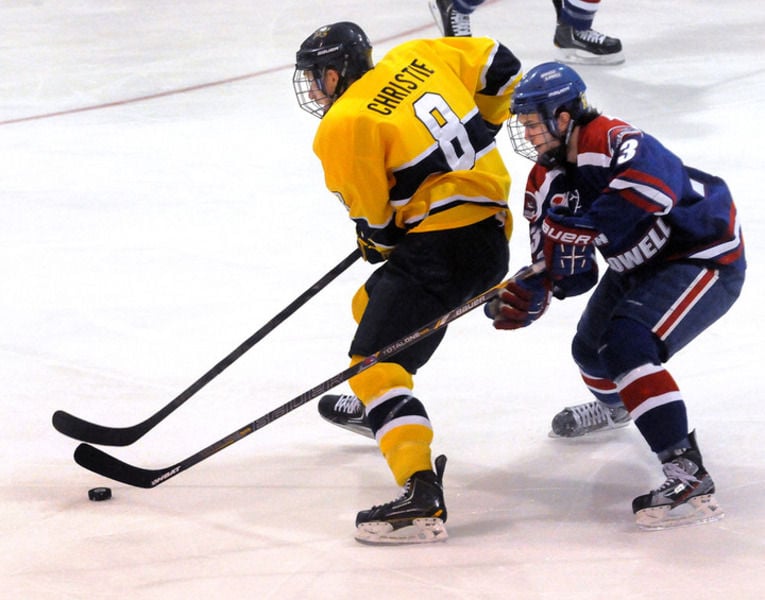 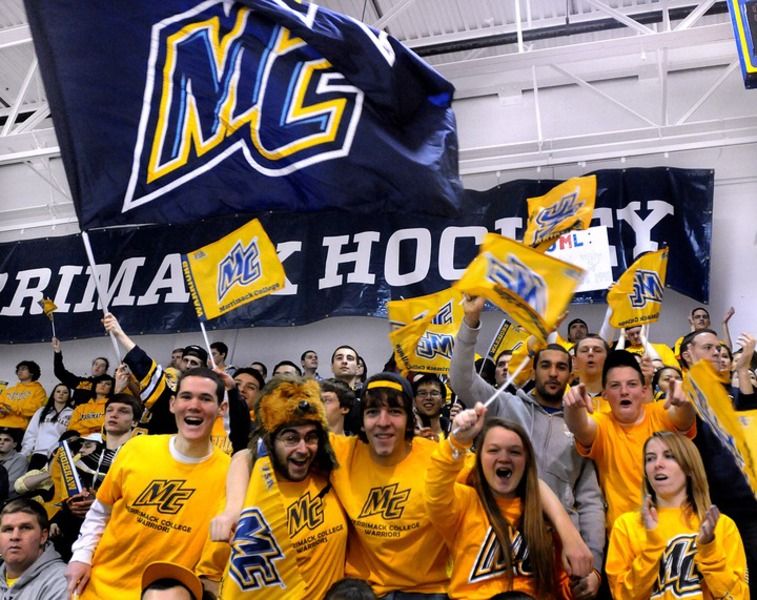 Merrimack College Warrior fans cheer for their team in hockey action against UMass Lowell Friday night. Merrimack's Justin Hussar scored the only goal of the game in the third period, giving Merrimack the victory. 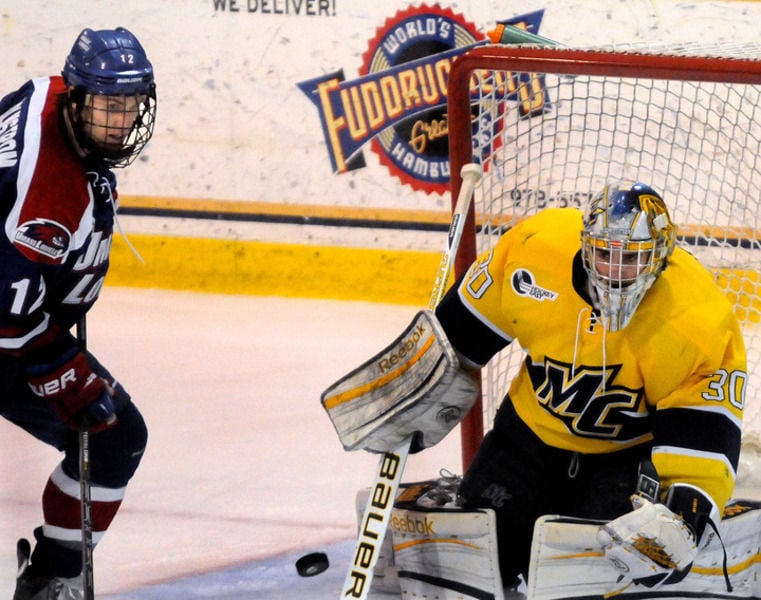 Goalie Sam Marotta keeps his eye on the puck after making one of his 25 saves as UMass Lowell's Josh Holmstrom does the same.

Merrimack College Warrior fans cheer for their team in hockey action against UMass Lowell Friday night. Merrimack's Justin Hussar scored the only goal of the game in the third period, giving Merrimack the victory.

Goalie Sam Marotta keeps his eye on the puck after making one of his 25 saves as UMass Lowell's Josh Holmstrom does the same.

NORTH ANDOVER — With 2:24 left in the third period, Merrimack College defenseman Tom McCarthy was whistled for hooking down Lowell forward Scott Wilson in the right circle.

Lowell head coach Norm Bazin called his timeout and pulled his goaltender, Doug Carr, essentially giving the River Hawks a 6-on-4 advantage. After Clayton Jardine was escorted to the box for slashing, that became a 6-on-3.

But, the Merrimack penalty kill held strong, thwarting every Lowell chance and hanging on for a 1-0 win over the River Hawks in front of a sellout crowd of 2,489 at J. Thom Lawler Arena.

The win for the Warriors snapped Lowell’s 11-game unbeaten streak; the River Hawks entered the game 10-0-1 over that stretch.

“Our guys work so hard on the penalty kill,” said Merrimack goaltender Sam Marotta, who stopped 25 shots for his second shutout of the season. “Any person we put on the ice is the hardest worker. Guys were blocking so many shots, I think they had more saves than I had.

The Warriors held Lowell to 0 for 6 on the power play, with the River Hawks registering just eight shots in 11:33 of power-play time.

For Marotta it erased his only poor start of the season, a 6-2 loss at New Hampshire last Saturday. Marotta and the Warriors will get another shot at UNH tonight when they travel to the Whittemore Center. The Wildcats beat Northeastern, 3-1, last night in Boston.

“I know that we all have games like that,” Marotta said. “For me, I just put it behind me. As soon as Sunday came, it was gone and in the past and I was just worried about battling (with Rasmus Tirronen) for the start this week. (Last night), I just played like it was any other game. I didn’t think about it.”

Justin Hussar scored the game’s only goal in the third period, taking a pass from junior Rhett Bly in the left circle and firing a wrister over Lowell goalie Doug Carr’s glove.

“He made a nice play to get the puck to Bly,” he said, “and Blysie got it over to me and I just wanted to get the shot off as fast as I could.”

The win was the 100th Merrimack win in the career of head coach Mark Dennehy.

If the house is rocking ...

As the seconds ticked down, Lawler’s low-hanging roof nearly blew off. The packed house brought with it a playoff atmosphere.

With the win, combined with Providence’s tie at Maine, moved the Warriors into a tie for the fourth and final home ice spot in the Hockey East playoffs with a game in hand.

The Warriors and Friars have one more game against each other.

“The crowd like that makes it more fun to play,” Hussar said. “It’s loud. For us, we want to give them reasons to keep celebrating.”

Added Marotta, “The atmosphere like that helps our for sure. When I went out there before the puck drop and there are people waving flags and screaming, there’s no where else I’d want to be.”

Rhett Bly, Merrimack’s junior center, went 15 for 20 in the faceoff circle. ... This was the first game since opening night that Merrimack won without Mike Collins scoring a point. ... Of the game’s 103 total shot attempts, 31 were blocked with Lowell blocking 19 and Merrimack blocking 12.

Next: at UNH tomorrow, 7