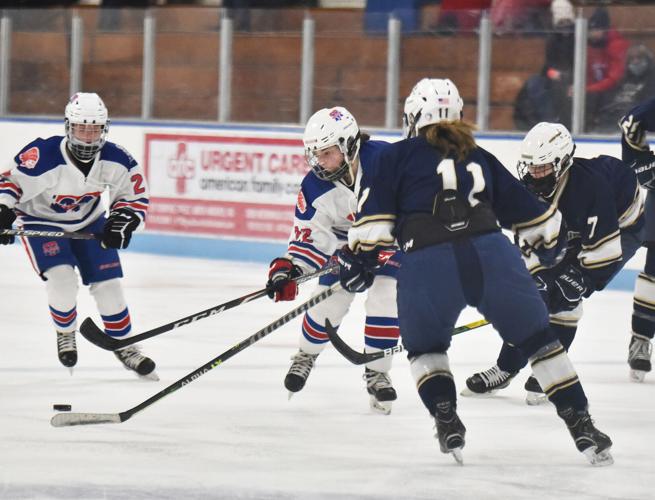 Methuen’s MJ Petisce moves the puck last winter for Methuen/Tewksbury. Petisce is gaining recognition as one of the best in the country, taking part in the Team USA Developmental Camp and the Hockey Night in Boston Tourney. 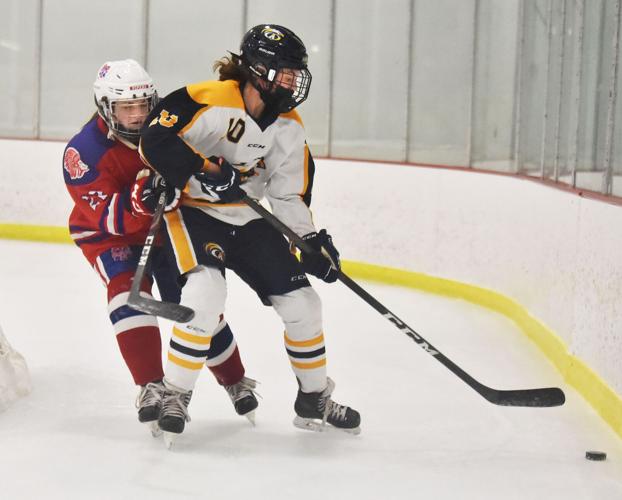 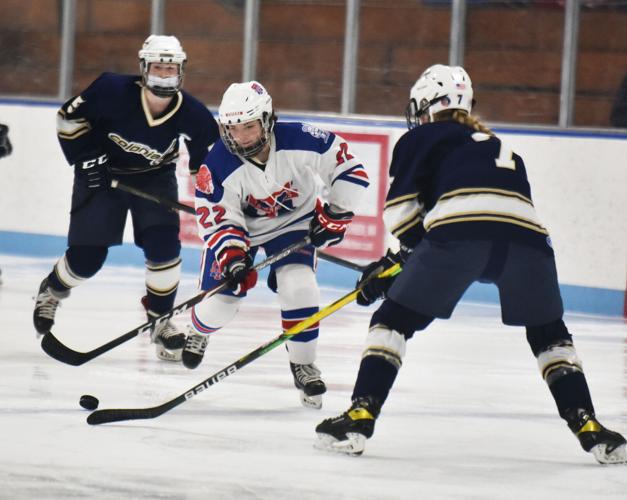 Methuen’s MJ Petisce calls herself an ‘offensive defenseman,’ be she also excels on the blue line. 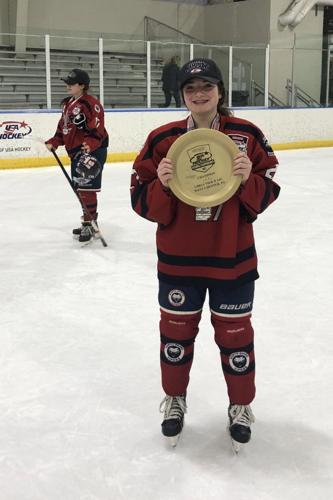 Methuen’s MJ Petisce moves the puck last winter for Methuen/Tewksbury. Petisce is gaining recognition as one of the best in the country, taking part in the Team USA Developmental Camp and the Hockey Night in Boston Tourney.

Methuen’s MJ Petisce calls herself an ‘offensive defenseman,’ be she also excels on the blue line.

When Methuen’s MJ Petisce saw the text message arrive on her phone, she didn’t know quite what to think.

“I was at hockey practice, and my dad texted me, ‘Congratulations MJ, you’re going to Minnesota!” remembered Petisce. “I didn’t believe it at first.”

That was St. Cloud, Minn., her father was referring to — as in the site of the Team USA Girls Hockey National Development Camp.

Still months away from her sophomore season of high school hockey, Petisce has spent this summer taking the ice with and against some of the best players in the United States and beyond.

In July, the 15-year-old took part in the Team USA Development Camp.

“That was an amazing experience!” said Petisce. “Every single player there was awesome. I was so honored to be one of the players from all over the country to be picked, and it really helped me take my game to the next level.”

This past weekend, Petisce skated for Team Northeast in the 28th annual Hockey Night in Boston Girls Major Showcase, which features stars from across the United States and Canada.

“I was very excited and super nervous!” said Petisce, a defenseman. “These girls were older, bigger and talented, but I love playing against the toughest competition, because that’s when you become a better player. I want to prove I’m on the same level.”

None of this comes as a surprise to Sarah Oteri Doucette, the head coach of the Methuen/Tewksbury co-op hockey team, who is thrilled to have Petisce anchoring her defense once again in the winter.

“MJ is a very talented player and we have seen her improve a lot over the past two seasons,” said Doucette. “She loves the game and is always looking to get on the ice. We know she represented the Red Rangers well at Hockey Night in Boston and beyond.”

Petisce had just finished a practice when she learned she had been selected to the USA Girls Hockey National Development Camp.

“My friend texted me congratulations, and I didn’t know what to think,” she remembered. “When my dad came to pick me up, he told me it was true, and I was so excited.”

The tryout process to earn the honor was a challenging one.

“There were four tryouts,” she said. “I participated in the Massachusetts tryouts. Since Mass. is a big state that’s big into hockey, we had our own tryouts. It started with a little over 200 players, and each time they would narrow it down. It was intimidating, but I did my best, and my dad got the email telling me I had been picked.”

“It really was amazing,” he said. “Not too many people get the opportunity to experience a camp with the best girls in the country. I took it in and loved it.

“It was amazing players from everywhere. It was great to meet other hockey players from all over. There were a lot of players from Minnesota, including my roommate. The competition was awesome and the coaching was terrific. The speed of the game was crazy. Everyone was so talented. It’s helped me grow my game.”

Petisce was once again around many of the best of the best when she played in the Hockey Night in Boston Major Showcase, which featured athletes from as far away as Arizona, Washington and around Canada.

“I heard a lot about it from my friends, who encouraged me to try out” she said. “So my dad signed me up, I tried out and made a team.

“I was pretty confident, but I was also nervous because I didn’t know what to expect. I’m on the younger end, and I knew there would be a lot of juniors and seniors out there. In the first couple of games, I did know quite what I was getting into, but I knew early on I could hang with those girls. and I ended up getting picked (for the major showcase).”

“I love taking on the girls that are bigger, older and better than me,” she said. “I love to see how the top players from other parts of the country play. People from different states and players from Canada, who are crazy good, play differently.

Methuen girls hockey star MJ Petisce comes from a family with a passion for hockey -- and Methuen High.

Her dad, Andrew Petisce, played varsity hockey for Methuen High (class of 1995), helping the Rangers to an MVC title in 1994. MJ’s mother, Shannon (Towne) Petisce (MHS 1996), played softball and swam for the Rangers.

Her older brother Jackson excelled in hockey and baseball at Methuen High, while sister Peyton Petisce was a captain for the Rangers field hockey team. Sister Sarah Petisce is heading into her senior season as a soccer and tennis player.

“It’s special for my wife and I to watch the family proudly represent Methuen High just like we did,” said Andrew previously. “We bleed blue!”