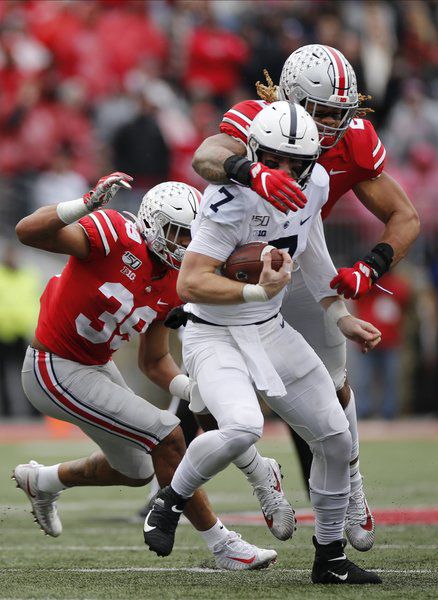 AP Photo/Jay LaPreteOhio State defensive end Chase Young, right, sacks Penn State quarterback Will Levis during the second half last Saturday, one of his 16 sacks on the year. 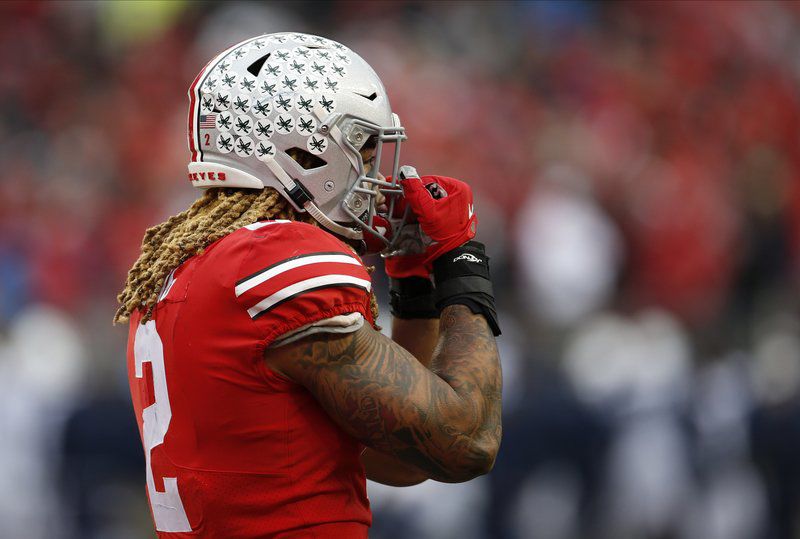 AP Photo/Jay LaPreteOhio State defensive end Chase Young, right, sacks Penn State quarterback Will Levis during the second half last Saturday, one of his 16 sacks on the year.

COLUMBUS, Ohio — Chase Young needed some help from a police officer to get through the crowd of fans that had poured onto the field after Ohio State beat Penn State at the Horseshoe. Otherwise, Young spent Saturday doing pretty much whatever he wanted for the Buckeyes.

The defensive end returned from a two-game NCAA suspension and reinserted himself into the Heisman Trophy race with three sacks among four tackles for loss and nine tackles overall in Ohio State’s victory over Penn State. The most basic numbers hardly tell the full story.

“Oh my gosh,” Buckeyes coach Ryan Day said. “I think Chase Young deserves to be in New York. How dominant of a player is Chase Young? And the impact he has on the game is just unbelievable.”

New York City is where the Heisman ceremony will be held on Dec. 14, and yes, Young should unquestionably be there as one of the finalists for college football’s most famous award. Young’s candidacy will test Heisman voters, but it should be an easy exam. There should be a place for the most talented player in college football on every ballot even though history says a few things will work against him:

— Young's position. No player who exclusively plays defense has ever won the award, but there have been a few in recent years who have been finalists.

— Young has two talented teammates on the other side of the ball who have played well enough to be in the Heisman conversation.

None of that should deter Heisman voters. The question is not whether Young should be a finalist. Clearly, the answer is yes. Young has been so good, leading the nation with a school-record 16 sacks, that he will enter the last two games of the season with a chance to catch presumptive front-runner Joe Burrow from LSU and become the first defense-only Heisman winner.

“He’s an incredible player,” Ohio State defensive coordinator Jeff Hafley said. “If there’s a more dominant player in the country on defense, bring me the tape.”

In April, Young will follow in the path of the Bosa brothers and become the latest Buckeyes pass rusher taken in the top five of the NFL draft. Maybe No. 1 overall. On Saturday, he broke the Ohio State record for sacks in a season previously held by Vernon Gholston, another former top-five pick.

“It means a lot. As an individual you have goals during the season. I reached one of my goals.” Young said. “My teammates helped me do that, Coach J (Larry Johnson) and I have to give all glory to God.”

Quarterbacks have had a lock on the Heisman for most of the last two decades. Since 2000, only three times has the award gone to non-quarterbacks. USC running back Reggie Bush won it in 2005 — and was stripped of the award because of NCAA violations. Alabama RBs Mark Ingram (2009) and Derrick Henry (2014) are the other players to break the run of quarterbacks.

In the age of offense and with quarterbacks more efficient than ever before, it is understandable that the Heisman has become almost exclusively for passers. Burrow is on his way to a historic season, on pace to set records for completion percentage (78.9) and efficiency rating (203.66). He has thrown 4,014 yards, 41 touchdowns and just six interceptions for the No. 1 team in the country.

Then there are the other Buckeyes. Both quarterback Justin Field and running back J.K. Dobbins have been among the very best at their positions. And Young is still clearly the best player on his team. With offenses so explosive and quarterbacks more accurate than ever, Young is invaluable to the Buckeyes’ top-ranked defense (3.52 yards per play).

“It allows us at times to rush three,” Hafley said about the difference between having Young and not.

Young has two more chances to make a statement: Saturday at No. 10 Michigan and then in the Big Ten championship game on Dec. 7.