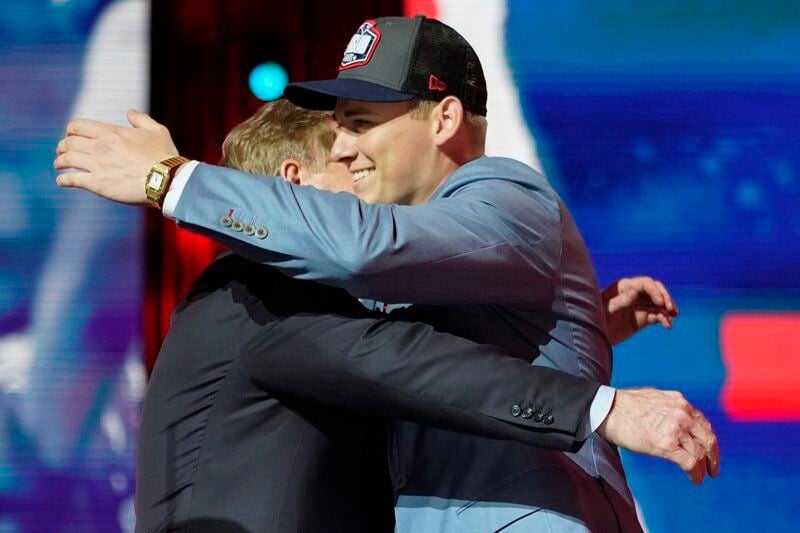 Alabama quarterback Mac Jones, right, greets NFL Commissioner Roger Goodell after he was chosen by the New England Patriots with the 15th pick in the first round of the NFL football draft, Thursday April 29, 2021, in Cleveland. (AP Photo/Tony Dejak) 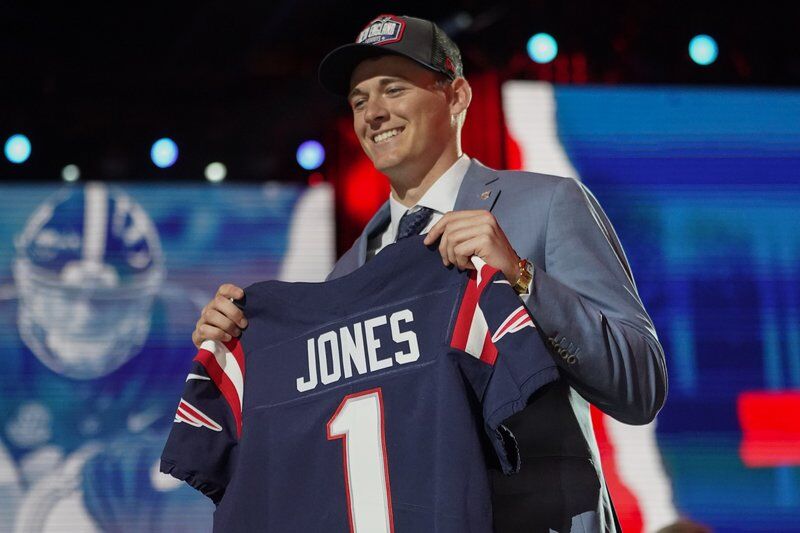 Alabama quarterback Mac Jones holds a team jersey after he was by the New England Patriots during the first round of the NFL football draft, Thursday April 29, 2021, in Cleveland. (AP Photo/Tony Dejak)

Alabama quarterback Mac Jones, right, greets NFL Commissioner Roger Goodell after he was chosen by the New England Patriots with the 15th pick in the first round of the NFL football draft, Thursday April 29, 2021, in Cleveland. (AP Photo/Tony Dejak)

Alabama quarterback Mac Jones holds a team jersey after he was by the New England Patriots during the first round of the NFL football draft, Thursday April 29, 2021, in Cleveland. (AP Photo/Tony Dejak)

The New England Patriots are done with the 2021 NFL Draft and it appears they got a few of the key players they really and truly wanted.

We won’t know for a few years about this draft, but we will know probably a little sooner about the ceiling on the Patriots first pick, 15th overall, Mac Jones.

It was an interesting pick because we’re getting the vibe the Patriots wanted him all along, yet did nothing to show it, particularly on Thursday night, by not trading up a few spots to ensure they get him.

Anyway, here are six thoughts on Jones being the most important draft pick by the Patriots in more than a decade, maybe as far back as 2001 and Richard Seymour.

The Patriots ruse was Justin Fields. They apparently made a few calls for the picks 8th through 10th of the first round. When Fields was chosen, the Patriots went radio silent, as in, they aren’t going for a quarterback. And whamo!, at their pick, No. 15th overall, they chose Mac Jones.

Was it risky? Hell ya. But upon further review there weren’t any real needy QB hunters after Fields, thus allowing the Patriots and Belichick to lie in the weeds and pray.

The Patriots apparently loved Jones, including and especially Josh McDaniels. After 20 years of accuracy and elite decision making, then one year of what-the-hell-was-that?, the Patriots realized anything close to Tom Brady’s tangible skills was ideal.

They got that with Jones who, even as a poor man’s Brady, is what is optimal at the position.

Jimmy Garoppolo was no Brady. He liked to hold onto the ball and roll out a little bit outside the pocket, two Brady no-nos. Jones not only looks like the lanky Michigan Tom Brady at just over 6-foot-3, with little muscle definition, but his ability to process information and get the ball out quickly was a key element to his game.

Drafting Jones is saying we all agree, Brady’s way was the way. There is so much talk about showing up Brady, with Cam Newton barely able to throw and trying to win, but that is all talk.

Jones shows the respect the Patriots brass had for the all-time great.

3. Cam's leash will be shorter

One thing Belichick said on draft night, unsolicited, was that Newton is the starter. He also had Jones behind Jarrett Stidham when he named them.

That’s normal for Belichick. He is very careful elevating rookies to starting status without seeing anything. Does Belichick think Jones will take over the starting role at some point in 2021? Absolutely.

Newton had some abysmal efforts last year and yet still returned series after series, only taken out twice when the games were over.

Not in 2021. Newton will get a little bit of rope, but it won’t be much, especially if Jones' practice tapes are worth viewing.

Newton will have to prove himself this season. Or he will be removed. And we’re talking September if necessary.

Also remember that it was unanimous among NFL draft people that Jones is the most ready college quarterback for the NFL not named Trevor Lawrence.

Patriots owner Bob Kraft told Jones on the phone late Thursday night that all of New England was thrilled with the pick. He was correct. It was pretty much universal that Patriots Nation approved of the Jones pick.

Some took Kraft to be saying that he and Patriots analytics were all-in on this decision as well, to go with the masses.

That is probably true, to some extent, but Belichick made this pick and probably made it a month ago, informing Kraft of all the details and reasoning, which is understandable.

Make no mistake, though, Belichick made this pick.

In the end, this is all chatter. Was it a good pick or a bad pick? Who knows? We will know within five years, the length of Jones contract.

The Patriots should be good out of the gate in 2021, a playoff team at least, possibly a winner of a January game or two.

If Jones can get the Patriots to precipice the AFC East, contending, and eventually playing in mid-to-late January on a consistent basis, this pick will be universally lauded. But it will be a big winner if Jones can do for the Patriots what he did for Alabama, win the big one ... and look good doing it.

Back in the 1990s, Bill Parcells and later Belichick in the early 2000s talked about “Michigan guys,” referring to tough and talented dudes out of the Bo Schemblecher mold. Basically, they not only look great but they played great players every week.

Well, Alabama is the new Michigan. In fact, it’s better. And guess who is fishing off the Tuscaloosa, Ala. pier very often lately? Not only did the Patriots add two Alabama guys in Jones and defensive lineman Christian Barmore with their first two picks on Thursday and Friday. This marks the third straight year Belichick has expended serious draft capital (first three rounds) on Alabama property.

Two other previous example, Cyrus Jones in 2016 and Dont’a Hightower in 2012, of Saban-to-Belichick picks were made with varying degrees of success. These Alabama guys are winners and have proven their mettle when it comes to the ability of being coached.