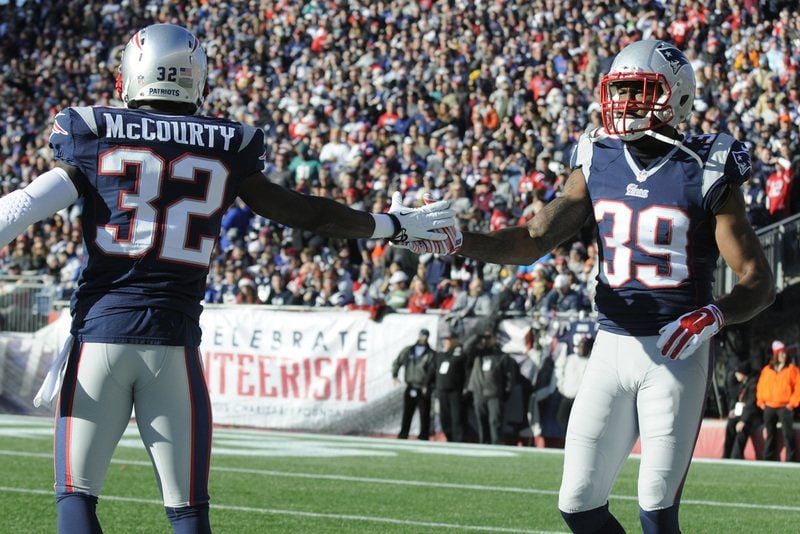 Devin McCourty high-fives Brandon Browner. It was another long day for Browner, who had a whopping four penalties. 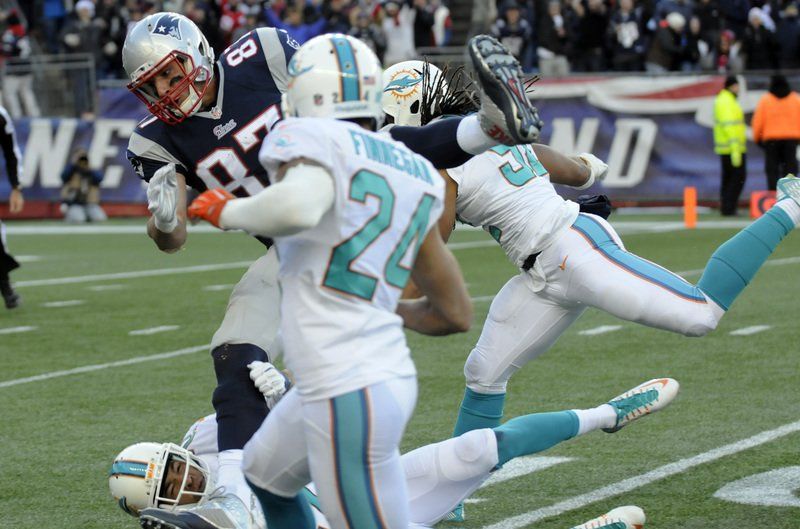 Patriots tight end Rob Gronkowski runs over several Miami Dolphins players after making a catch during the third quarter. Gronkowski caught three passes for 96 yards and his 11th TD of the season. 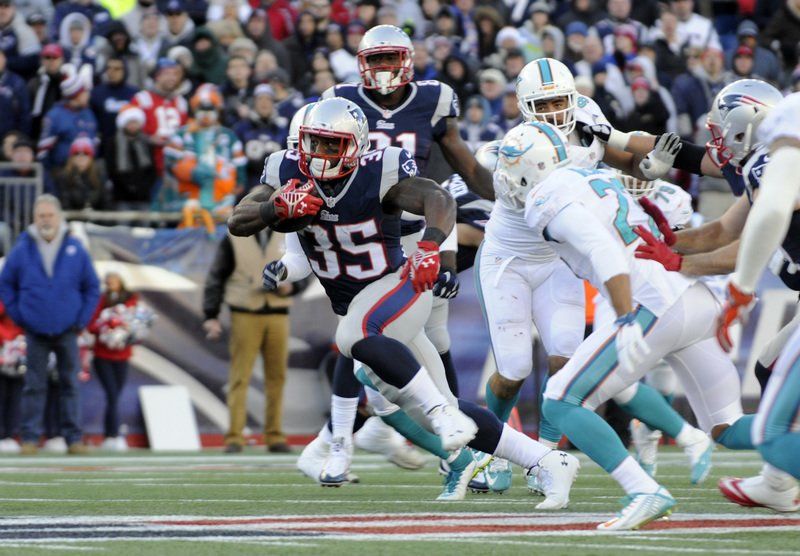 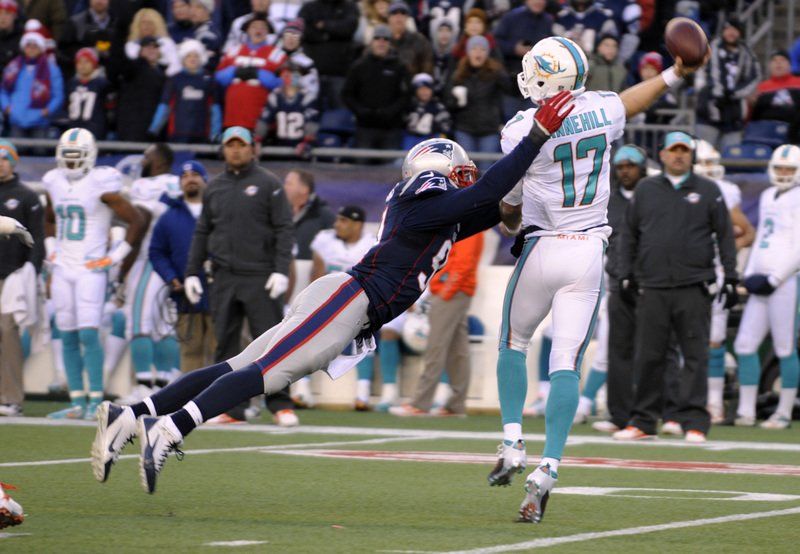 Devin McCourty high-fives Brandon Browner. It was another long day for Browner, who had a whopping four penalties.

Patriots tight end Rob Gronkowski runs over several Miami Dolphins players after making a catch during the third quarter. Gronkowski caught three passes for 96 yards and his 11th TD of the season.

1. Chandler Jones – Clearly, the guy was confused by the schedule. He last played on October 16, and his return from a hip injury had Jones in autumn form with 1.5 sacks, four solos and a forced fumble. Now, will he realize this is December and disappear again, as he has in his first two seasons? We shall see. Remember, coming into this year he had one career sack – regular season or playoffs – after November 30.

2. Dont’a Hightower – Returned to impact at inside linebacker, just as he had been before his injury. Four solos, a half-sack shared with Jones. And he was in the backfield all night long with a forced fumble.

3. Julian Edelman – The offense needed to extend the defense and give Tom Brady some place to work. Again, this little guy came to the rescue. Played like his one drop cost this team a Super Bowl. He had 7 catches for 88 yards and a TD. Another Pro Bowl kind of day.

1. Malcolm Butler – Who the heck lined this guy up to start the game directly across from Mike Wallace? Shame on you for landing this kid smack dab at the top of the “No Shows.” DCMD (“Don’t Call Me Darius”) was torched early and often, sending him to the nice, warm, comfy bench. Gave up a 50-yard catch on the first play from scrimmage and his day never got better.

2. Danny Amendola – It’s become laughable when Bill Belichick has to go sprinting out on the field to congratulate this $5 million a year guy for catching a punt. Bill did you noticed the three others where he whiffed on blocks (or just chose not to block), leaving Julian Edelman hanging back there, ready to get his head knocked off. Great job on his two kick returns – average field position was the 18-yard line. Danny, they give you the 20 for free, big guy. One catch for 11 yards on the day. Of course, he gave those yards back (well, 10 of them) with a hold on a Jonas Gray run.

3. LeGarrette Blount – Miami’s front handled him. Ran eight times for 17 yards. Ouch. It forced a call to Jonas Gray in the bullpen.

Line (B) … Rushing three or four and then dropping everyone else back in coverage worked back in September. So credit Miami coach Joe Philbin for playing the exact same defense today, just to make things easier for these guys. Ryan Wendell drew a flag that was declined for holding, and that was it against these guys. Brady wasn’t sacked, either

Running Backs (B-) … A step back for LeGarrette Blount with 8 rushes for 17 yards. Shane Vereen showed little shake and less explosiveness on his six-carry, five-yard day. It’s become a waste of time handing him the football, and he’s now doing less in the passing game (1 catch, 12 yards). Enter Jonas Gray to salvage the day. Most of this was after the Dolphins had thrown in the towel, but he did have 11 carries for 62 yards.

Receivers (B) …There is no depth. Might this matter in the next two months? Probably. But for now, it’s Julian Edelman (7 catches, 88 yards) and JoJo LaFell (6-66) and that’s enough. Brian Tyms? No thanks. No nothing. And we all know about the player Danny Amendola has devolved into.

Tight Ends (B+) … The best thing Gronk did all day was lift both legs off the turf and jump when Jimmy Wilson drew a great angle on the big fellas knees on a 35-yard connection to the Dolphins 6. Probably saved his ACL right there. Finished a quiet day with three grabs for 96 yards and a TD.

Quarterbacks (C) … Does Brady understand this team will need nothing but straight A’s from him come playoff time. Threw one awful pick and missed four other receivers who were wide open in the first half, in which he drew a 41.5 rating. Spectacular second-half against a team that had been begging to quit doesn’t make up for his lifeless first half.

Line (B-) … Plenty of production from Chandler Jones at the edge, and some decent work in the pass-pressure game, but Sealver Silaga’s sack really belonged to a linebacker, Jamie Collins. And Miami did run effectively at times, despite a loaded box.

Linebackers (B+) … Dont’a Hightower had a great day. Jamie Collins, remind me if you’ve heard this, was menacing in the pass-rush and was lost in coverage too often. Collins totally lost Damien Williams in the end zone, a drop that saved the Pats a TD. Both guys are so good going forward. It’s a shame to see them asked to cover.

Secondary (C-) … “We don’t look at yards allowed sometimes,” said Devin McCourty. Maybe, you should. A bad Dolphins offense that didn’t want to be here after getting punched in the snout by Baltimore last week, threw for 197 yards in the first half and 346 yards for the game against you, not including the 35 yards in penalties to Brandon Browner.

SPECIAL ‘NO SHOW’ OF THE DAY TO BRANDON BROWNER

Brandon Browner had one of those unmasking days, you know like when the “Mad Hatter” grabbed Batman’s cowl in the old 1960s TV series.

Only Browner apparently doesn’t have a killer utility belt like the Caped Crusader. Batman somehow evaded the mess.

Browner’s weaknesses were displayed for the entire world to see yesterday.

The veteran corner, allowed to walk from Seattle, just got torn up in coverage yesterday vs. Miami. And it wasn’t Mike Wallace, or rookie sensation Jarvis Landry smoking the veteran. Browner couldn’t hang with guys like Brandon Gibson, Charles Clay and Daniel Thomas, at least when Browner chose not to cheat.

In all, Browner drew four flags, hitting for the cycle of defensive back ineptitude – illegal contact, holding, pass interference and a personal foul.

And I hate to pile on, but they missed a blatant pass interference against him that resulted in Pat Chung’s interception.

The funny thing is, Browner has largely been mediocre all year. But the team has done a nice job protecting him with the media.

First off, he’s pretty open and has been pretty good to deal with. Second of all, they keep winning and spinning it, that he’s an enforcer – not just a penalty machine (now 15 on the year).

Don’t think this doesn’t concern this football team as the playoffs approach. Darrelle Revis was asked about all the flags yesterday. Why? I’ll get to that in a second.

“I feel like we’re going to play physical football that’s it,” said Revis. “You have to give credit to Brandon for just staying focused, doing his assignments, playing his game and forgetting about those flags and continuing to play. Flags are a part of the game. I give him credit for sticking with it.”

But did he? It seemed like he turned in late in this one.

We wanted to ask Browner about it afterward, but he said, “I have something to take care of, and I’ll be right back.”

And then he was gone.

Maybe, he had an issue. I’ll give him that. But his play and the penalties are a problem, one the Pats had better address.