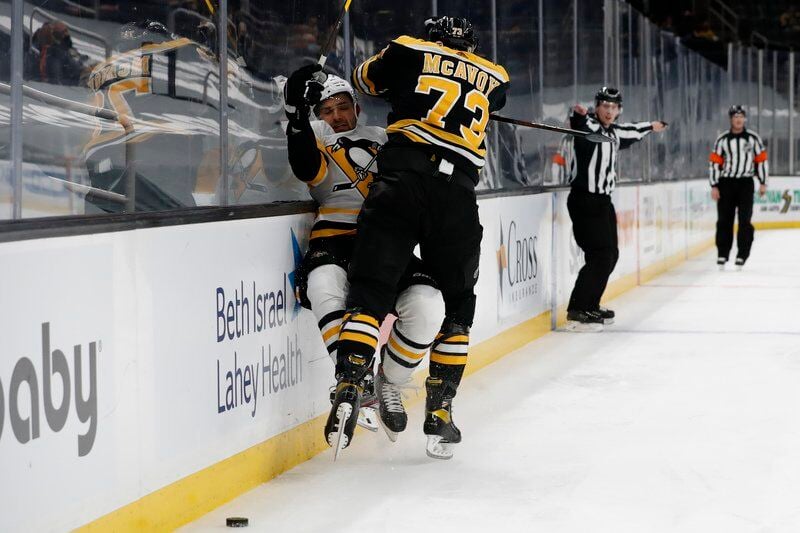 One of the few Bruins highlights Thursday came when defenseman Charlie McAvoy blasted Pittsburgh's Zach Aston-Reese against the boards in the second period.(AP Photo/Winslow Townson) 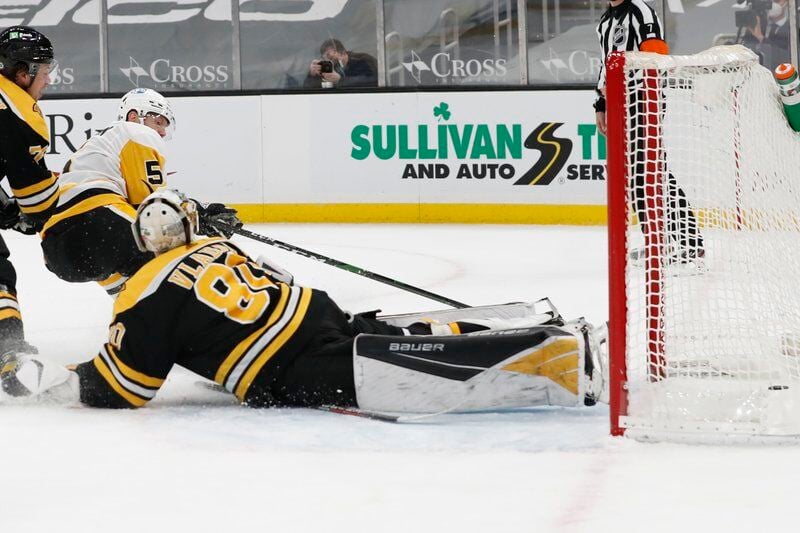 Rookie goaltender Dan Vladar of the Bruins is beaten by Penguins defenseman Mike Matheson Thursday night. That end-to-end rush by Matheson was emblematic of Boston's frustrations in a 4-1 loss.(AP Photo/Winslow Townson)

One of the few Bruins highlights Thursday came when defenseman Charlie McAvoy blasted Pittsburgh's Zach Aston-Reese against the boards in the second period.(AP Photo/Winslow Townson)

Rookie goaltender Dan Vladar of the Bruins is beaten by Penguins defenseman Mike Matheson Thursday night. That end-to-end rush by Matheson was emblematic of Boston's frustrations in a 4-1 loss.(AP Photo/Winslow Townson)

BOSTON — I can’t say this with certainty, but am willing to bet none of Mike Matheson’s first 35 goals in the National Hockey League were of the ‘did you see that?’ variety.

Thanks to an atrocious three-zone breakdown by the Boston Bruins Thursday night, you most certainly can say that about Matheson’s 36th lamplighter.

A nondescript defensive defenseman, Matheson schooled the Bruins — and fellow blueliner Jeremy Lauzon in particular — with a rush from his own red line, flying past a flat-footed Lauzon on the outside and up ice before swooping right-to-left to easily put a backhand past rookie goaltender Dan Vladar.

That one horrific second period sequence was a microcosm of how Boston’s defense let them down badly in a 4-1 loss to Pittsburgh, a team they’re now in arrears of in the East Division standings by nine points.

Lauzon was guilty of a cardinal sin of defending: not moving his feet. Matheson, who no one would ever mistake for Connor McDavid in terms of his skating or offensive acumen, blew past the Boston rearguard like he was flying through an E-Z Pass lane coming off of the Tobin Bridge.

The Bruins had trouble transitioning the puck and making clean, tape-to-tape passes all evening. Their work in the neutral zone — a giveaway there by David Pastrnak with seven minutes to go led to Jason Zucker’s backbreaking tally for the visitors — was shoddy as well. Emotion seemed to be lacking in large amounts against a strong skating, hungry opponent that delivered pressure in abundance.

“We’ve had trouble executing for a while now. We don’t take care of the puck well enough” head coach Bruce Cassidy said postgame. He was talking about his team as a whole, but it easily could’ve been reserved for the guys whose job it is to prevent pucks from entering the home team’s net.

Those aren’t things you want to hear for an underachieving team that’s trying to remain in the fourth and final playoff spot in the division.

There was further cringe worthy news regarding Boston’s six-man defensive corps: that of their in-game health.

Brandon Carlo exited after a tick under seven minutes of ice time with an upper body injury. Having just returned to the lineup Tuesday after missing the previous 10 contests with a concussion, the Bruins can ill-afford to have their 6-foot-5 shot blocking, heavy hitting defensive conscious out for another lengthy stretch.

Matt Grzelcyk had a scary moment when the puck flew around the dasher and struck him in the side of the head in the third period, although he returned to the ice quickly.

While he didn’t miss any time, Charlie McAvoy (minus-3) seemed to get the worst of it in a late second period collision with Penguins D-man Cody Ceci. McAvoy shaken up near the end of the second period after a collision with Cody Ceci and slammed into the boards. He was visibly shaken afterwards, bent over in pain on the bench. An injury to the Norris Trophy candidate at this point would be catastrophic for Boston.

(McAvoy did produce what’s becoming a signature play of his, using leverage and strength to staple Zach Ashton-Reese along the glass earlier in the middle stanza, negating a scoring bid).

And poor Lauzon, taken 15 picks after Carlo in the Bruins’ much scrutinized 2015 draft, couldn’t get out of his own way for much of the night. He had a shot blocked and promptly took an interference penalty 31 seconds into the third to prevent an odd-man rush the other way. On his next shift after getting out of the box, he was picked clean by Pittsburgh captain Sidney Crosby while trying to keep the puck in at the blue line, with Crosby rushing down his off-wing for a scoring chance against Vladar. He also had to get stitched up after being felled.

The Bruins need secondary scoring; there’s no doubting that. Fans are howling for the team to acquire someone (or plural someones) prior to the April 12th trade deadline with good reason.

But it’s with equally good reason that the Boston brass is more likely exploring which defensemen other NHL teams might be willing to part with. Thursday night’s showing only exacerbated that fact.

Between the second and third period, one of the 2,191 or so in attendance bellowed from the balcony, ‘WAKE UPPPPP!’ It’s unclear if he was directing his missive at a fellow patron ... or the hockey team he had come to watch.

It was that kind of night, one of the Bruins and their defense can ill afford to have as the playoff chase gets tighter and tighter.

Phil Stacey, the Executive Sports Editor of The Salem News, covers the Boston Bruins for CNHI Sports Boston. Contact him at pstacey@salemnews.com and follow him on Twitter @PhilStacey_SN