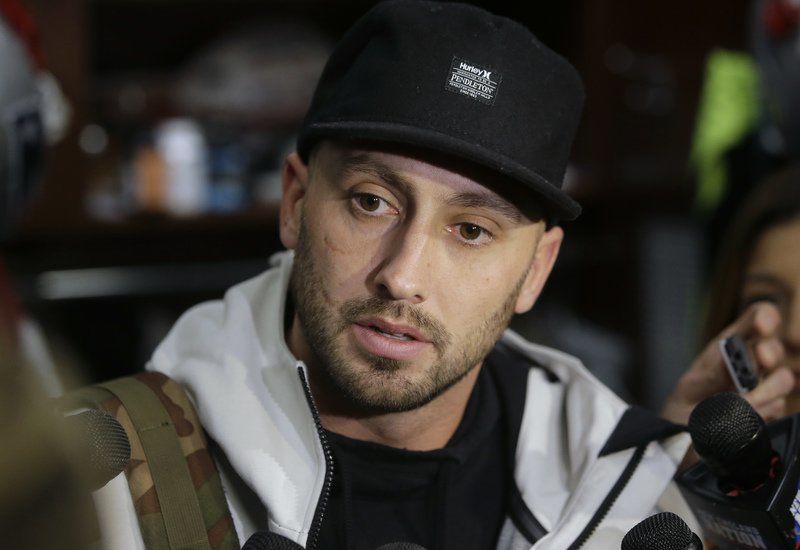 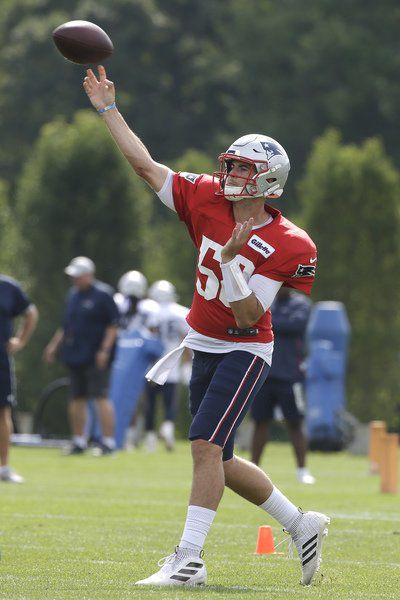 Associated PressWith the signing of career backup Brian Hoyer, the Patriots seem to have settled on Jarrett Stidham as their franchise quarterback, at least for this season.

Associated PressWith the signing of career backup Brian Hoyer, the Patriots seem to have settled on Jarrett Stidham as their franchise quarterback, at least for this season.

I was shoulder deep into my Jacoby-Brissett-is-the-one column.

You have to trust me, it was going to be a good one.

Brissett would’ve been cheap, about $7 million for one year. He’d have been great competition for Jarrett Stidham, who has improved leaps and bounds the last two weeks. And if Brissett had won the job, he’s experienced as an NFL starter, and played in this Josh McDaniels system for 15 months.

It would have been interesting to see if Brissett is actually a top 15 quarterback in the NFL, and find out what Belichick and McDaniels could get out of him that the Colts couldn’t.

I thought it would be a good move, covering a lot of bases. But I also had noted that explaining Belichick’s past and present moves is never easy. And as for predicting his future decisions, let’s just say I’m in a 20-year slump.

Then the story broke on Sunday afternoon: The Patriots, for a third separate time, signed QB Brian Hoyer to a contact.

But this signing is a little different. Hoyer isn’t returning to 1 Patriot Place as a caddy for an all-time legend. He’s here to push an unknown quantity, then mentor him, and, God forbid, replace him in times of trouble.

We’ve come to find out, according to ESPN.com’s Adam Schefter, that Hoyer chose the Patriots because he will be given the chance to fight for the starting position.

Hoyer is a great guy. Very approachable, and has great Brady stories.

But he is not a starting quarterback on a decent team in the National Football League. His decision-making, under duress, is sub-par.

It could be argued that Stidham beat Hoyer out last summer, jumping to backup without any experience of fanfare. Do you think that will change?

Here’s a problem. Stidham-Hoyer, even with Belichick in their corner, inherit a “first-place” schedule, which means the Patriots not only play the AFC West (at L.A. Chargers) and NFC West (at Seattle, at L.A. Rams), but they play Baltimore, at Houston and at Kansas City.

And lest we forget that the AFC Least (East) has turned into possibly the best division in the conference.

Advice/pep talks from Hoyer won’t really matter in November in, say, Seattle. Because he won’t be able to hear anybody.

The message is that Belichick is in this for the long haul. Winning now probably went out with Brady’s exodus.

Stidham and the Patriots could finish 6-10. And that might not be bad if there is light at end of the tunnel, that Stidham has signs of “goodness” if not greatness.

But if Stidham is a run-of-the-mill backup, the decision could set the Patriots back a year or two.

Then it’s finding another quarterback, probably a young one. Another learning curve. Another nondescript season.

While there is virtually no game tape on Stidham other than preseason games and a pick-6 against the Jets, there is practice tape on Stidham. He filled in a lot for Brady during his rest days.

But a few games against Alabama and LSU and some practice tape doesn’t compare to the real thing, as in the Baltimore Ravens or the new, improved and favorite Buffalo Bills in Orchard Park, N.Y.

The Patriots appear to have potential to have a so-so year, with a lot of room to pay players, particularly free agents, in 2021. They also have a year to develop several young draft picks (a 1st, three 3rds and 4th in the first 125 selections).

Has Belichick earned a mulligan or two or three? Absolutely. Remember, the 2000 Patriots were 5-11 and a year later, in a snowstorm, a dynasty was born.

Maybe he coaches everybody up to 10-6. We’ve seen crazier things, like the first Super Bowl championship season 20 years ago.

After the Patriots were bounced from the playoffs against the Titans in January, Belichick was asked about the message he had for the fans who have stuck with him and the team “through thick and through thin.”

He snidely noted, “I don’t think there have been too many thin years around here.”

He’s right. But one is possibly staring us right in the face.