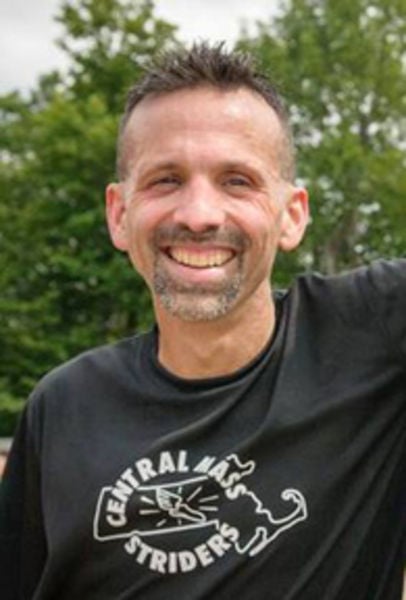 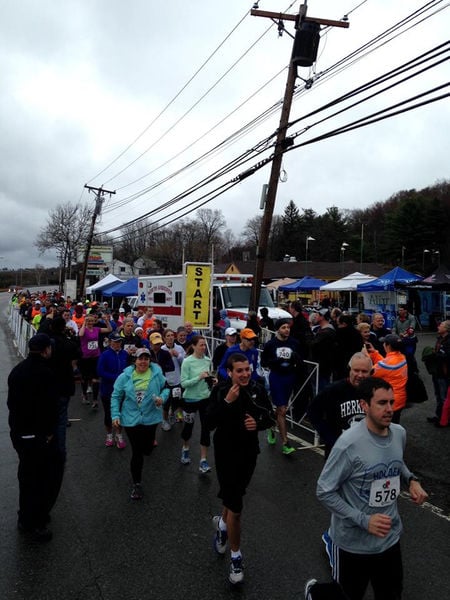 Runners take off at the start of the North Andover Earth Rock Marathon/Half-Marathon April 27. It's one of several new half-marathons in the region. 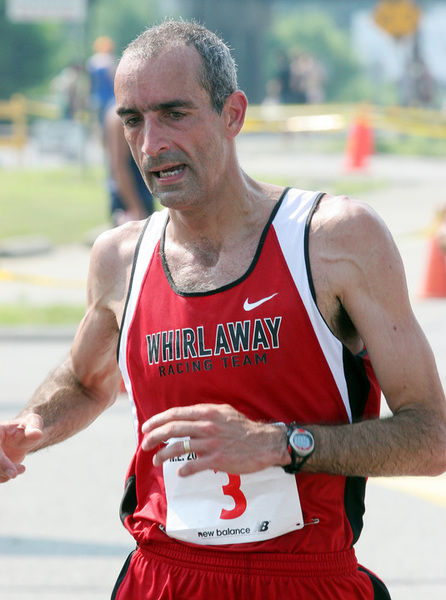 Derry's Craig Fram, finishing a local road race several years ago, has won more money at the Mount Washington Road Race than any other runner.

Runners take off at the start of the North Andover Earth Rock Marathon/Half-Marathon April 27. It's one of several new half-marathons in the region.

Derry's Craig Fram, finishing a local road race several years ago, has won more money at the Mount Washington Road Race than any other runner.

The Earth Rock Run Marathon/Half-Marathon in North Andover apparently is here to stay.

At the very least, the half-marathon will definitely remain, which is not surprising. Half-marathons have sprouted up all over the region in the last year or two.

What was once a rarity, seen as either an occasional marathon training run or a second-class alternative to a complete 26.2 miles, is growing quickly in popularity.

One recent posting listed 41 half-marathons in Massachusetts during the calendar year, with at least one in every month but January, and another 22 in New Hampshire.

Moreover, a surprising number are close by.

In addition to the Earth Rock race, which was held April 27, the Twin Lights Half-Marathon was held the same day in Gloucester, there are three 13.1-mile races in Newburyport (June 1 River Run, Oct. 26 Green Stride and Nov. 3 All Women and One Lucky Guy Half-Marathon).

Turning to New Hampshire, there’s the Jingle Bell Half-Marathon in Atkinson Dec. 14, the Feb. 23 Half at the Hamptons, the Oct. 5 Smutty Nose Rockfest Half at Hampton Beach and a new one set for May 18, the Funky Kingston Half-Marathon.

Others close by include two in Gloucester, one in Lowell and one in Salem.

”I think half-marathons are becoming a trend,” said Earth Rock race director Chris Bernier, a former Londonderry High cross country runner. “I think a lot of people think they want to run a marathon but they don’t realize how long it is until they start training.

”A half-marathon is still a great goal, a pretty long distance, but it’s more manageable. It’s a good alternative.”

Agrees Eli Bailin, a Newburyport High grad who created the Earth Rock races and is the president of Green Stride: “I think a lot of people who start out want something after the 5K and this is something for them. You don’t need to train as much.

”I think it’s the race people want to run now. I know with the Green Stride (half-marathon), I felt Newburyport needed one. It has a great history of races, but no half-marathon. And it’s been a big success (nearly 2,000 runners last year).”

In addition to being attractive to newcomers, there are others, like myself, who see it as a good way to wind down. After running 29 marathons, my body is no longer prepared to go 26.2 miles, but I’m planning on a half-marathon later this year.

The Earth Rock Half-Marathon, for a first year, was definitely a big success. Coming just six days after the Boston Marathon, there were — despite drizzly, unappealing weather — 371 finishers as well as an another 127 finishers in the accompanying full marathon.

”It was just a great, positive experience,’ said Bernier. “All the runners seemed to enjoy it and we had great community support from the town, the neighbors, the police ... everyone.”

The only drawback, and it’s a minor one, is that a hilly start and a very tough hill near the finish (on Bradford Street) can be daunting.

“It’s not a course to expect a PR on, but we had some PRs,” said Bernier. “It’s challenging.”

On the other hand, support for the runners was high and it would have been greater if the weather had cooperated. The original plan to have music played throughout the course had to be scrapped because of the rain.

There is some speculation that the Earth Rock marathon may be scrapped next year due to logistics and cost, but there is no question about the half-marathon.

”I think we’re definitely on for next year,” said Bernier. “The town was happy, the police were happy and the runners were happy. We did great with minimal advertising and we think we can do a lot better.”

With the way half-marathons are going, that shouldn’t be a problem.

Dunham first ran at Mt. Washington in 1988, winning the race and becoming the first person to run under 1:01 with a then course record of 1:00:50. He won again the following year in what is still the closest finish in the history of the race, beating Hall of Famer Bob Hodge by one second. He won for a third time in 1994.

He is ranked second in sub-1:02 finishes with four and is tied with Hall of Famer Keith Woodward with the most top-10 finishes (15). He has the most top 5 finishes in the history of the race with 15. In 2006 he published “Only One Hill – A history of the Mt. Washington road race” and is frequently referred to as the race historian.

For those who want to run a race over Memorial Day weekend, there are two good ones locally.

Both races feature good courses and plenty of extras. This year runners can enter both races simultaneously.